British passion for "Fabergé in Lon­don: Rom­ance to Revol­ution" V & A

Imperial Easter eggs created by Carl Fabergé (1846–1920) have been lent by Moscow Kremlin Museums to London’s V&A in the best display of the eggs for years. Fabergé in Lon­don: Rom­ance to Revol­ution will run until May 2022. In the previous post, I discussed the factors that led to Faberge’s success, the impor­t­ance of the Russian Imperial Court and the central role the Imperial Easter eggs played.
But remember the V&A is displaying 200+ of the most st­unning Russian art objects. Now I want to relook at the V&A exhibition, highlighting the small artworks that specifically fulfilled British, Edwardian tastes. 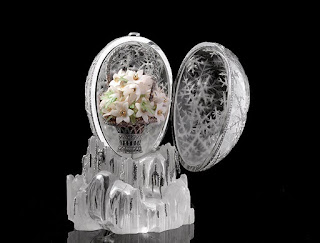 Winter Egg, basket of anemones, 1912–3,
designed by Alma Pihl, for Fabergé.
In Jan 1911 Alfred Nobel’s nephew Emanuel Nobel marked important oc­c­asions in Stockholm where the weather inspired the giving of ic­ic­le art. This Fabergé patron ordered snow flake brooch­es in rock-crystal, with tiny dia­monds. The snow­flakes ev­oked the harsh winter of Russia and soon be­came a popular Fab­erge design, created by Alma Pihl. This Winter Egg was the most expen­sive egg they made.

Czar Alexander III had made Fabergé the Romanovs’ off­ic­ial court jew­eller. His son Czar Nicholas II continued the tradition and by 1900, this Russian-born goldsmith (from Fren­ch Huguenots) made Fabergé into a multi-national enterprise. It spread across several spec­­­ial­ist work­sh­ops, each headed by an expert work mas­ter.

Alexander Palace Egg was presented to Nicholas II by Fabergé, and by Nich­olas to his mother, Dowager Empress Maria Feod­orovna, in Easter 1913. Nich­ol­as’ mother then gave the Easter gift to his wife Al­exandra to celebrate the centenary of the Romanov dynas­ty. The egg’s gold sur­face was adorned with ivory miniatures of all 18 Romanov rul­ers, framed with rose-cut diamonds. Alexandra (1872–1918)’s eggs were display­ed besides a selection of family items in the secl­uded Alexander Palace, their favourite home.
Fabergé’s smalls were usually gifts, circul­ating between spouses, lovers, family and colleagues from the royals and aristocracy. Snowflake brooches and white quartz flowers were ideal; the original­ity of Fab­ergé’s creations meant that they could grow the donor-recipient relation­ship. For the Romanovs, increas­ingly with­drawing into private life in resp­onse to political crises, relat­ionships were very familial. The Empress Maria Feodorov­na had been born Princess Dagmar in King Ch­rist­ian IX of Den­mark’s court and her elder favourite sister, Alexan­d­ra, had married Edward Prince of Wales in 1863. Once Maria discovered Fab­ergé, his small objects made the yearly holiday trips from Russia to Britain.

British Queen Alexandra enticed Fabergé to London, rather than fash­ionable Paris, when he decided to open his first and only branch shop outside Russia in 1903. In an office at Premier House, the new London br­anch did not advertise, and until 1911 it had no shopfront. Only th­ose who had prev­iously been introduced to Fab­ergé knew it was there; they walked upst­airs and knock­ed on a door. Once inside they could purchase everything: hard­stone figures, smoking par­aphern­al­ia, walk­ing stick handles, opera glasses and frames. Fab­er­gé’s ag­ent in London was Henry Bainbridge, whose memoirs of his time with Fab­erge were the source of history about the firm’s UK business. 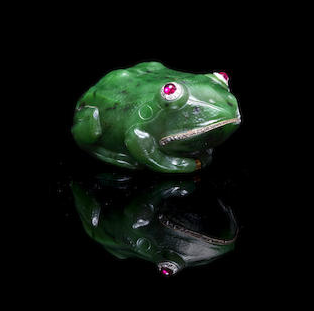 Edward VII and Alexandra became patrons of Faberge London, then the rest of Edwardian England followed. The secl­ud­ed shop became part of the network of social relation­sh­ips. Rus­sian diplomats went to En­g­l­ish country-house parties with Fabergé tr­easur­es. The art of gift-giving was to seal relationships between elite members of society, so the pre­sents had to seem modest. The items act­ually ranged from £5 for simple silver cas­es, to thousands for jewellery.
In 1906 Alex­an­dra designed a bright green neph­rite frog with dia­m­ond eyes, holding a silver-gilt lighter in its mouth, for Edward VII. A monochrome en­amel box decorated with a view of Chats­worth was not for Duke & Duchess of Dev­onsh­ire, but for their friends. Alexand­ra gave the Chat­sworth box to Dowager Duchess Louise Cavendish in 1908.
Until 1917, Fabergé’s objects were used or passed down. Except Queen Alex­and­ra who was found to have many ob­j­ects; nothing was thrown away in 60 years! Vita Sackville-West inher­it­ed many Faberge works from her mother.

See the art nouveau-inspired gold cigarette case fired with layers of blue en­amel over an engraved moiré ground, originally pres­ent­ed to Ed­ward VII by his loved mistress Alice Keppel, another Fabergé devotee. After Edward’s death in 1910, the widowed Queen Alex­andra ret­urned this love token to her ex-rival out of goodwill. Note the glitt­ering snake biting its own tail, a symbol of eternal love evoking the elite world with endless conn­ect­ions. This clearly resonated with the British royal family 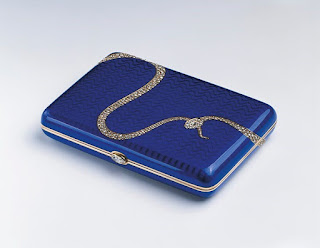 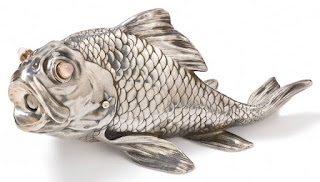 Fabergé workshops were able to convert functional items into art obj­ects sculpted as silver animals. Examine chief work-master Henrik Wigs­tröm’s silver cigar-cutter shaped as a carp. The cabochon pink eyes set in gold formed the push-pieces and the mouth as the cutter.
Post-Revolution Western markets welcomed Fabergé items that came out of Bol­shevik Russia via smugglers & exiles. Or via the Antik­variat, Len­in’s Ministry of Trade dep­artment specif­ically designed for the profit­able disposal of art. Eg in 1933 King George V found the Mosaic Egg, which Pihl designed for Alexandra. Con­fiscated by the prov­is­ional gov­ernment in 1917, the Antik­variat sold it for 5,000 roubles. 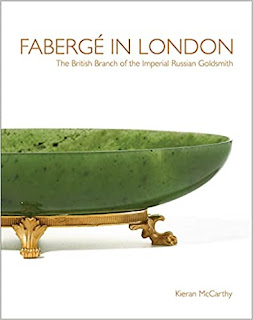 What happened to the Fabergé shop in London? Although I don't smoke, I'd love to buy that cigarette case with the snake biting its own tail.

The Fabergé shop in London didn't close until Russia was really struggling for resources in WW1. So that was a very long time until it reopened again in 2011, now selling luxury jewellery under its new owners. Forbes says the new shop features a lilac façade that evokes the guilloche and enamel techniques for which Fabergé was renowned. The interior is a fusion of old and new.

Hello Hels, When I used to look frequently at auction catalogues, sale that featured objets de vertu often contained Faberge item. The starting prices were not so stratospheric, especially the simpler items (which I prefer anyway), and if based on silver instead of gold. I suppose that today Faberge prices have gone up, because of the big-money desire for trophy names. Than and now, for similar prices I would look at 18th century European (usually French) exquisite items that exploit similar techniques, and have more of an aura of history about them--at least apart from the Russian royal family.
--Jim

I was fortunate to go to the Fabergé museum in St Petersburg in 2019 and saw not just the eggs but so many other beautiful items. I had forgotten about this exhibition at the V and A so thanks for the reminder. I'll get myself a ticket if there are any left
.

It's amazing how Fabergé has never seemed to go out of fashion. I suppose exquisite artistry (and the opposite of utility) is the key. Having only ever seen any Fabergé in photographs, I can still appreciate the magnificence of the work. And its not only the eggs; there's lots of other jewellery but I think your picture shows the most elegant of the cigarette cases. Many of the others are a bit OTT!
CLICK HERE for Bazza’s diligently dilatory Blog ‘To Discover Ice’

Hi Hels - I love the Faberge workmanship - it's totally exquisite. We've had a programme recently about Faberge - really interesting to see St Petersburg, and to see the history ... that book by Kieran McCarthy would be a treasure to own. Cheers Hilary

18th century art objects that were created in France were indeed exquisite. But I am not sure that they used similar techniques, nor that they had more of an aura of history about them. Yes the C18th objects were much older, but since Faberge had the Russian royal family and nobility in mind from 1850, his costs were greater and his reputation more exclusive.

When I was collecting, I also bought silver instead of gold, and simple rather than exotic, but *cough* not necessarily from choice.

It is not often I am envious of other bloggers, but I would have given anything to have visited the Fabergé museum in St Petersburg!!

Yes indeed, try to get tickets to the V and A exhibition, but remember that "Fabergé in Lon­don: Rom­ance to Revol­ution" has a different theme from St Petersburg's and different art objects.

I too appreciate the exquisite artistry of the Faberge art objects, even if some of them are not to my taste at all. And I find it is very interesting that British patrons in particular wanted their Faberge purchases to be made of expensive material but to look modest... which they did.

Re Fabergé seeming to never go out of fashion, I am looking now at the company's current sales items.

Yes you will enjoy reading Kieran McCarthy's book, Fabergé in Lon­don: British Branch of the Imperial Russian Goldsmith. But as I said to Fun60, the book has a different theme from books about Russian Faberge art objects, and different target purchasers.

Beautiful things. I would think many of the early twentieth century pieces have an interesting history and not always quite properly acquired. While not my usual thing, I would like to see the exhibition.

Spot on! Who could be certain with gold, silver and bejewelled art whether it was properly acquired or not? At least English hallmarks verified each piece of silver's dates and makers, but even then, the market could have been fooled by dodgy sellers, jewellers and auction houses. With non-English or non-silver, I would get an expert to test the art object before spending any big money.

No problem with the exhibition. Each object has been thoroughly vetted.

Faberge art objects were always so very special, I would recommend a] reading the catalogues and b] visiting exhibitions when you can. In these years of pandemic and misery, Faberge still manages to make my heart melt.

thanks...you are a good blogging colleague :)

Great post. I used to be checking constantly this weblog and I'm impressed! Extremely useful information.

welcome to the wonderful world of history blogging. Have you a particular interest in Fabergé in Lon­don: Rom­ance to Revol­ution?