The Italians say they had the first coffee place in Europe when in 1645 they opened a coffee house in St Mark’s Square, Venice. This seems likely. 20 years later Emperor Leopold I apparently granted Armen­ian merchants the ex­clusive right to serve coffee, but the evidence is scanty.

The most dramatic spread into Ch­ristian countries came in 1683, by accident, when a Turkish army had besieged Vienna. In th­eir hurried withdrawal, the Turks left behind hundreds of sacks of green beans, which the locals as­sumed was fodder for Turkish cam­els. A Turkish-speaking Pole Georg Kolschitzky had done valuable work during the siege, carry­ing messages through the Turkish lines. He asked for only 2 re­w­ards: all the sacks of green coffee beans left by the Turks, and a house where he would be able to establish the first Viennese coffee-house: Blue Bottle.

The Viennese did not like the Turkish taste, so Kolschitzky str­ained off the sediment & added milk & honey to neut­ralise the bit­terness. The new drink soon became extremely pop­u­lar and bus­iness thrived. 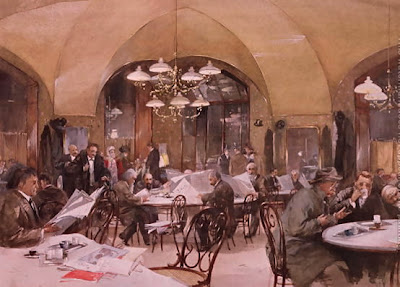 The drinking of Viennese-style coffee soon spread over cent­ral Europe: Mar­seil­les and Paris, soon after Vienna, 1683; Nuremberg and Regens­burg, 1686; Hamburg, 1687; Stut­tgart, 1712; Berlin, 1721. By 1714 Vienna had already 11 licensed coffee houses. In England during the C18th, many of the coffee-houses declined and were later developed into exclus­ive men's clubs, offering better facilities. Meanwhile coffee houses in Paris and Vien­na cont­in­ued to flourish, as cafe society culture remained popular there.

During the Vienna Congress of 1814-15, the Neuner’s coffee house emerged as Vienna’s leading literary café. In 1824 Ignaz Neuner promoted his café to the Silver Coffee House, a deluxe café. All the utensils and room accessories were made of sil­ver. After the Silver Coffee House’s heyday, Café Griensteidl wel­comed Vien­nese literary luminaries with comfortable decoration and daily newspapers. And Café Zentral was elegant from the outside and gorgeous inside. 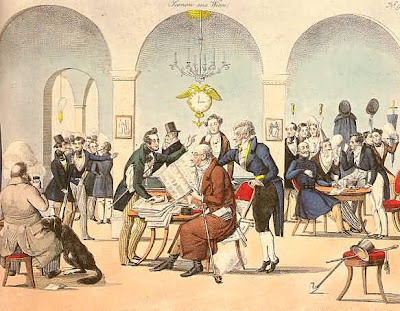 Being an expresso fanatic myself, I can only be grateful that in intellectual Viennese circles, coffee-drinking was regarded as an aid for clearer thinking and better discussion. Each coffeehouse catered for its subgroup of regular customers and developed individ­ual styles of coffee preparation. It became a home away from home for its pat­r­ons. There was a coloured eng­raving, The Passion for Newspapers 1837, which showed a coff­eehouse of the original, spacious, high-ceilinged kind. Coffee was drunk, and pipes were smoked. Letters were read and written, and newspapers from all over were available.

Another thing important for me personally was that the development of coffee-houses in Austria went along with the growth of early periodical newspapers eg Wien­er Zeit­ung. These news­pap­ers ap­p­eared twice a week, so a person could either have a subscr­iption OR read it in a coffee-house. When read­ing newspapers was not allowed, on Sundays, coffee houses were closed.

But it took 180 years for Julius Meinl to develop a process which could supply roasted coffee of a consist­ently high quality. In 1862 he opened a retail shop in Vienna, the first with the great idea of supplying coffee already roasted. The business rapidly expanded into an elegant chain that stretched throughout the Habsburg Empire.

The heyday of the coffee house was the late C19th. Many artists, scientists, and politicians of the period were constant cof­fee house patrons, the famous ones to be seen, the impoverished ones (I am guessing) to stay warm in winter. In other cities of the Austro-Hungarian empire, coffee houses in the Viennese style popped up.

The Sachertorte was created by young pastry chef Franz Sacher (1816-1907) in 1832 for Prince Metternich, the Austrian State Chancellor. The Sachertorte and other recipes made him famous, and in time he ran several cafes and rest­aurants. Anna Sacher, later Franz’s daughter in law, became manager of the gorgeous Sacher hotel. 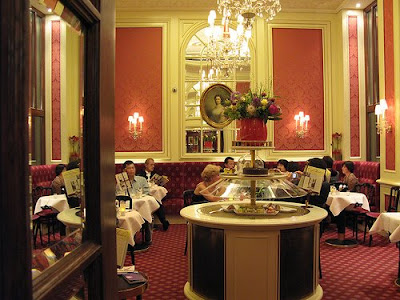 Patissier Christoph Demel acquired a pastry business in 1857 and it moved to its present position in 1888. The Demel, like the Hotel Sacher itself, is claimed to be the only other place where you can buy the Sachertorte and listen to music. And the beautiful people stayed in grand hotels like the Bristol, the Imperial and Hotel Sacher.

The 1873 World Fair was built in Vienna's Prater Park, located along the Danube. Emp­eror Joseph II had already declared the Prat­er to be free for public enjoyment, and allowed the establishment of coffee-houses and cafés, which led to the start of the Wurstelprater. This was perfect. The park was c4,000 acres, including lawns, gardens, lakes, streams and forests.

The Ringstrasse was built in the place of the medieval walls that used to surround the centre of Vienna, now the 1st District. Em­peror Franz Josef I announced the demolition of the city’s orig­inal walls, in order to build an imperial boulevard as an exp­r­ession of the glorious Habsburg Em-pire. The work was completed in 1890. The new Ringstrasse was a place for café society to parade and sup. Evangeline at Edwardian Promenade blog says in The Viennese Cafe that by the early 1900s, c500 cafes flourished in Vienna. Café Imperial was one of the most famous Ringstrasse cafés.

Both the Vienna Opera House and the Burgtheater had already been compl­eted before Ring­stras­se was started. Now the parks were filled with musicians’ statues: Mozart, Beethoven and Strauss, and concerts offered music by Mendelssohn, Schubert, Mahl­er, Brahms & Johann Strauss. Vienna took its culture very seriously; people went to the opera or concert, then wended their way to Sacher. 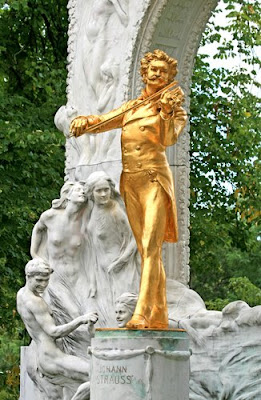 The Fearless Read blog noted in Cafe Society that Fin-de-siecle Vienna, sliding ever deeper into political instab­il­ity, was an ideal place to escape from the exigencies of daily life through art and coffee. The Tate Exhibition showed how small groups gathered for literary and artistic discussion at their favourite coffee places. In their portraits, Kokoschka, Schiele and Richard Gerstl focussed on pushing beyond the public face of the era to expose raw psychol­ogical truths.

In the end, café society and the good life certainly crashed in WW1’s battle fields and the breakdown of the Austro-Hungarian Empire.

People say that whereas Paris cafes concentrated on coffee, alcohol and a bohemian life style, Viennese cafes focussed on coffee, cakes, stringed quartets and an elegant lifestyle. That seems right. But how much of Old Vienna still exists: Café Landtmann, Café Sperl, Café Hawel­ka and The Braun­erhof are all in business. The locals and tourists love them and Merisi's Vienna For Beginners has the photos to prove it in At Demel's in the Year of Darwin. 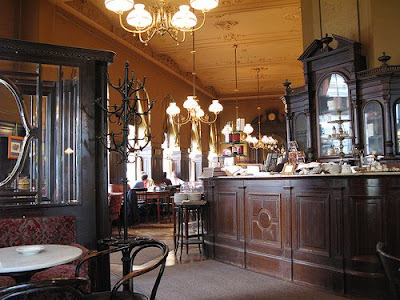 Thanks to Under The Net blog in Vienna Café Festival, I heard about the exhibition, conference and collection of essays entitled The Vienna Café 1900, Oct 2008. This joint project of the Royal College of Art and Birkbeck College London was an event I would love to have attended.

thank you for your link to my humble blog! I feel honoured to be able to offer your readers a little taste of Vienna.

Among the many venerated Viennese companies and institutes you mention in your essay, I would like to pick Julius Meinl, which may not be such a household name abroad, but. I leave you this link which, when clicked upon, will lead to a selection of my posts, each of them featuring at least one pictures taken with an image referring to Meinl.

I hope you enjoy the tour! :-)
If you have any questions concerning other images, please do not hesitate to let me know. I will try to help you whenever possible.

Helen,
have you read Stefan ZWEIG's memoirs, "The World of Yesterday"?

Here's what he had to say about the Wiener Kaffeehaus:

"... it must be said that the Viennese coffeehouse is a particular institution which is not comparable to any other in the world.

As a matter of fact, it is a democratic club to which admission costs the small price of a cup of coffee. Upon payment of this mite every guest can sit for hours on end, discuss, write, play cards, receive his mail, and, above all, can go through an unlimited number of newspapers and magazines."

I have referred to this quote several times on my blog, following this link will take you there. The posts include pictures taken at Café Central, Café Bräunerhof, Café Hawelka, Café Landtmann, Café Markusplatz and Café der Provinz. You see, even today, there's no shortage of coffee places in Vienna. :-)

Good to see you Merisi

I wonder if impoverished Viennese artists paid for their coffee by giving the cafe owner a drawing.

In Paris, especially during the cold winter months, it seemed a sensible thing for young artists to do.

Dear Helen, it's great to read through your post on Vienna, and I will certainly keep visiting your blog :)

As yet there isn't a publication but I believe it's in preparation. The Vienna Cafe project can be found here for updates: http://viennacafe.rca.ac.uk/index.html

Take care and thank you for visiting my blog. I would have left this on your page but I couldn't for some reason! Hence the e mail.

Best wishes from London,
Edie (Under the Net)
http://uneautrevieedie.blogsome.com/2008/09/21/fin-de-siecle-vienna-conference-festival/trackback/

I discovered your answer to my comment only today, sorry!

Regarding artists paying for coffee, I know that the owners of Cafe Hawelka received the one or other drawing or painting in lieu of payment. There must have been others, I suppose.

I happened to not have to pay for a cup of coffee in exchange for a photo I snapped (I had asked permission and that's how the owner and I agreed on the exchange of goods - I did not report it to the taxman, though).

I was wondering if you ever thought of changing the layout of your
site? Its very well written; I love what youve got to say.

But maybe you could a little more in the way of content so people
could connect with it better. Youve got an awful lot of text
for only having one or two pictures. Maybe you could space it out better?
Here is my weblog :: ways to make money as a kid

Anon
thank you for your suggestions. I try very hard to achieve a balance between text and images, with 5 or 6 images, not 1 or 2.

International Traveller Magazine wrote a detailed review of Hotel Sacher, suggesting that if there was ever a perfect place to practise the European art of lounging and people watching, it is from the Sacher. Oh yes, and the cakes, dining rooms, paintings and chandeliers are to die for.

I love coffee! I am used to using coffee capsule, I make my own coffee capsules with a k cup & nespresso coffee capsule filling sealing machine. But I am trying new ways to enjoy coffee recently

My day doesn't start till I have had my first espresso, usually at noon :)

This blog is very informative and appreciable. If you are looking for nespresso pods online in Australia then you should try coffee pod shop.

I agree with you... Melbourne is the best place to drink coffee anywhere. But I suspect we probably learned it from Vienna.