National Socialist rhetoric did not spring from a vacuum. The tirades against Bolsheviks, Jews and other alien elements were not an isol­at­ed aberration in an otherwise uninterrupted cultural history of civ­il­ity and humanity. The contin­uum dated at least back to the C19th (Ursula Ginder). The general anxiety in Germany about the future of moral, physical and intellectual strength fostered the myth about a culturally distinctive and racially pure Volk. Many late C19th art­ists saw the alien elements infiltrating German art as those of the French avant-garde (Peter Paret). But conservative cultural critics blamed the destructive influences on the purity of German culture on the greed of Jews eg all the prominent art dealers. The Jew was a dangerous enemy that had “penetrated” the citadel of German culture.

Given this history of cultural xenophobia, Nazi prop­aganda made sure that the discourse surrounding the notion of the "unhealthy" in a people became a common concept among the general populace. It could then be easily directed at intellectuals, artists, Jews, Comm­unists and all opponents to the Reich’s philos­ophy.

I find this very ironic. Germany had emerged as a leading centre of the avant-garde in music, art, film and architecture, giving to the world the Brucke Group, Otto Dix, Ernst Kirchner, Arnold Schoen­berg, Kurt Weill and Fritz Lang. But the Nazis viewed the culture of the Weimar period with reactionary disgust. Their response stemmed partly from conservative aesthetic taste and partly from their determination to use culture as a prop­a­ganda tool. 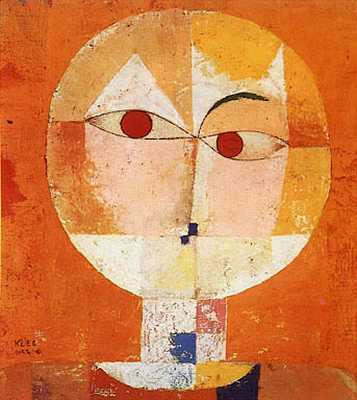 Klee, Head of a Man

The so-called Jewish nature of all impenetrable, distorted or depr­av­ed art had to be suppressed. By propagating the theory of degeneracy, the Nazis combined their anti-Semitism with their drive to control the culture. And in Nazi Germany from 1933 on, the terms Jewish, Degen­erate, modernist and Bolsh­evik were all used to refer to non-Germanic art, whet­her it was created by German artists or not. Hitler, Goebbels and others did not dislike art. On the contrary, they were pass­ion­ate art patrons, collectors and sometimes connoisseurs. In fact as an art-loving chan­cellor, Hitler viewed art as the expression of a racially pure culture and as a means to unite a community. 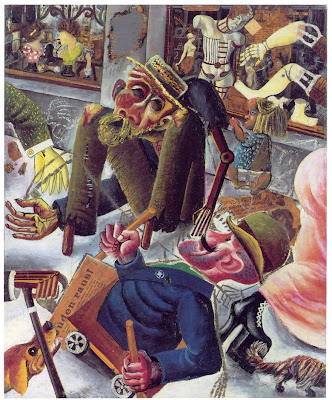 While modern styles of art were prohibited, the Nazis actively pro­moted paintings and sculptures that were narrowly traditional in manner and that exalted the True Blood and Soil values of racial pur­ity, nationalism, mil­itarism, health and obedience. They referred to this style of art as Heroic Romantic Realism. Hitler himself said that “we have come to the end of artistic lunacy and with it, the artistic poll­ution of our people. National Socialism has set out to rid the German Reich, and our people, of all those influences which threaten its exist­ence. And although this purge cannot be accompl­ished in one day, from now on we will wage an un­relenting war of purification against the last element of putre­faction in our art”.

By 1937 racial purity was firmly entrenched in Nazi policy, and auth­orities purged German museums of modern art now labelled degenerate. The selection criter­ia were to be scientific­ally based on the new Aesthet­ics: all German art had to serve a state purpose. Heroic German Art symbol­ised racially pure art, while modern styles dev­ia­t­ed from the prescribed norm of clas­s­ical beauty. Racially pure art­ists prod­uced racially pure art; modernists of an inferior race pro­d­uced contorted works. Any that "insults German feeling, or destroys or con­fuses natural form, or reveals an absence of ad­equate manual & artistic skill" was culled. Inventory lists indicate that at least 16,500 works were seized from Germany’s galleries.

Joseph Goebbels ordered that once this purging of all of Germany’s public collections was done, the art that had been sel­ec­ted out for destruction would be shown to the German people for the last time. A special Exhibit­ion of Entartete Kunst/Degenerate Art was to be held in 1937 in Munich. Painter Adolf Ziegler was prof­es­sor at Mun­ich Ac­ademy of Fine Arts and under Joseph Goebbels, he became pres­­ident of the Reich Chamber of Visual Arts in 1936. Ziegler was auth­orised to confiscate works for the Entartete Kunst Exhibit­ion and in 2 weeks, he ch­ose 650 works by 112 artists, many being Jews or mar­r­ied to Jews.

Hitler’s vicious speech against modern art in July 1937 was the op­ening gambit to the Degenerate Art show which opened 1 day later. Trying to outdo his Führer, Professor Ziegler succeeded in invoking equally evil forces in his speech at the exhibition opening.

The massive Munich exhibition astounded its German audience: the queues were very long for the 4 months of the exhibition! The show was intended as an official condemnation of modern art, and included 650+ paintings, sculptures, prints, and books from the collections of 32 German museums. Expressionism and the Bauhaus were heavily represented. Pictures were hung badly, in poor lighting and were surrounded by scribble. Modernism was shown to be a conspiracy by artists who hat­ed German dec­ency; those artists were identified as Jewish-Bolshevist. At least half were neither Jewish nor Bolshevist, but the damage was done.
*
The list of degenerate artists included some of the best modern art­ists in Eur­ope, but why were these particular art­ists and not oth­ers, defined as Degen­er­ate? Being at Bauhaus was the kiss of death: Walter Grop­ius, Marcel Breuer, Mies van der Rohe, Her­b­ert Bayer, Lud­wig Hil­b­­er­seim­er, the Moholy-Nagys, Oskar Schlemmer, Lud­wig Hirschfeld-Mack and Lyonel Feininger were all included. So were George Grosz, Emil Nol­de, Han­n­es Beck­mann, Amadeo Modig­liani, Salv­ador Dali, Pablo Picasso, Paul Klee, Fernand Leger, Max Beck­mann, Wassily Kandin­sky, El Lissitzky, Marc Chagall, Piet Mon­dr­ian, Oskar Kok­os­ch­ka, Max Ernst, Josef Albers, Jankel Ad­ler, Ludwig Meidner, Kurt Schwit­ters and Otto Dix. These were my favourite early C20th artists. 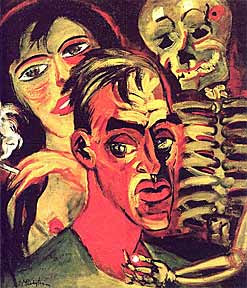 Pechstein, Self Portrait with Death

It was far more popular than the nearby Grosse Deutsche Kunstaus­stel­lung/Great German art exhibition, featuring officially sponsored Her­oic Art. But not just in Munich. After Munich, the touring exhibition covered 11 other cities in Ger­m­any & Austria, attracting 3 million visitors in the two countries by the time the tour ended April 1941. 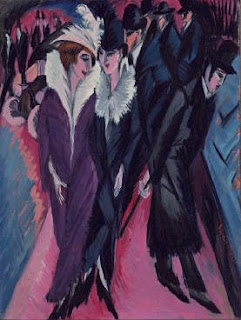 After the exhibit, paintings were sorted out for sale and sold in Sw­itzerland at auction; some pieces were acquired by museums, others by private collectors. Party lead­ers appropriated some paint­ings for their own collections. In March 1939, the German Fire Brigade burned the less important paint­ings and books publicly. The degenerate art NOT included in Entartete Kunst were stored in a warehouse in Berlin. When the Russian army was the first to liberate Berlin after the war, some artwork may have been transported back to Russia.

Other art shows were mounted outside Germany in the late 1930s, trying to alert the public as to what was happening to modernist works in Munich. The C20th German Art Show was held at the New Burl­ing­ton Gall­eries London in 1938. In 1938 MoMA in New York mounted an exhibition called Bauhaus 1919-1928. And The Herald Exhibition of French & British Con­t­em­p­orary Art travelled around three Aust­ral­ian capital cities in August 1939. Although successful, these “alternative” art programmes were most modest, less strident and less Jewish versions of modernism that the Nazis themselves mounted.

A Blog About History has given us access to The Free University in Berlin's data base, documenting 21,000 works of art which were labelled by the Nazis in 1937 as Degenerate.

I feel the same (ironic).

I agree that the Nazi propaganda is a really important time in rhetoric and art for people to remember and examine so that something like that never happens again. Your site is a really great resource for learning about a wide range of different topics.

Incredible Sculptures offers contemporary marble-wood sculptures. One of Leading manufacturers, suppliers, artists and showrooms of incredible sculptures in Delhi, India and it is organising art exhibition in Delhi 2011.

Sachin,
thanks for your note. I have been quite interested in Indian history recently and will certainly have a look at your 2011 exhibition. Let me also refer you to a post on the Delhi Durbar at http://melbourneblogger.blogspot.com/2010/12/delhi-durbar-grandly-celebrating.html

Carmen
I come back to the question of degenerate art over and over again - in the blog, of course, but also in lectures and at conferences. It seems we still have so much to learn about the 1933-45 era.

Harry
An article on "The Forgotten Story of Degenerate Dealer Alfred Flechtheim" was forwarded to me last week. You may find it interesting.