Art Deco and the American Diner

That is not to say that huge buildings could not be lovely. The RCA building in Rockefeller Centre New York has fine Art Deco features but, except for the elegant motifs that decorated the entrance archway and elevator doors, who could have seen those features? The best thing about small buildings (like diners) was that the art deco architectural elements could be seen by people at ground level.

Being an Australian, I had never seen a diner. Since the Depression, small roadside diners came to symbol­ise the working-class Amer­ican who didn’t have the time or mon­ey to eat in a more posh place. But for me, they represented small architecture that was ideal for art deco treatment, inside and out.

The original style diner was long and narrow, presumably to make it possible to drive the diner along the road. This may have been a legacy from the original diners which were never intended to remain stationary. As art deco taste grew stronger across the world after the Paris Exposition of 1925, the sharper shapes of the early diners were smoothed out, rounded and stream­lined. 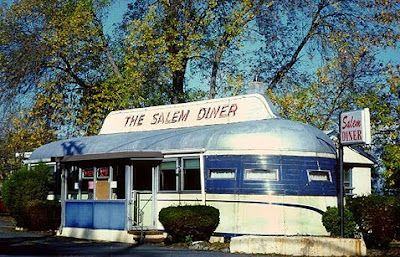 In American Car Culture blog, Michael Witzel wrote a History of the American Diner. During the 1930s, prefabricated diners reached the height of roadside design when manufacturers built beautiful, stream-lined structures. JB Judkins produced a curvy model called the Sterling Streamliner and the Worcester Lunch Car Co. created a fast, angle-ended building. Eventually roadside restaurants looked very snazzy indeed. Why streamline? Because this was the design that identified with fast modes of transportation and the efficiency of the machine age. Like trains or planes, the diners looked sleek and aerodynamic.

The 11th St Diner in Miami had a style that was compatible with the local buildings in Miami Beach. Curvilinear streamlined structure, glass bricks, gleam­ing stainless steel and detailed design elements eg the repeated circular medallions and the type face for Diner, all identify this portable structure as Art Deco. Once again, modern materials were incorporated into streamline forms to symbolise speed and mobility. Rosie’s Diner in New Jersey 1932 had the all-stainless-steel exterior, dis­tinctive curved roofline, rounded glass block cor­ners and a neon sign. 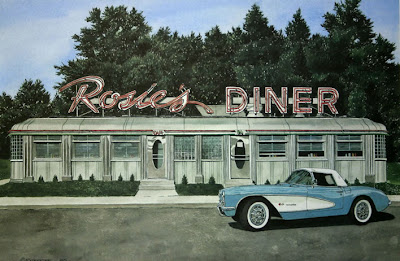 
Neon signs (invented in France in 1902) became symbols of glamour & pro­g­ress, a way of show­ing the world you were up to date. Set on vertical blades and mar­quee porches over the foot­path, neon appeared on many art deco buildings. Plus neon was a per­fect fit for the streamline moderne archit­ec­t­ural craze for sweeping curves, glass walls and chrome. These were even more important for late-night workers who, having no meal outlet, needed to find a place to be able to eat while still in their work clothes. 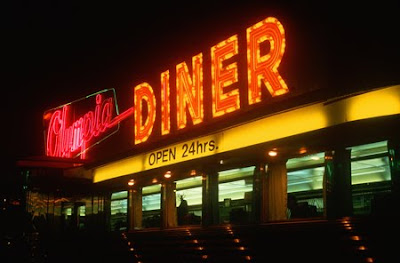 Could a shop­-front restaurant be considered a diner? Tom Breneman Hollywood 1937 clearly thought so. This struct­ure was a grand example of the Streamline Moderne style diner with its sweeping curves, glass blocks, a blade with the diner’s name in bold neon and the splendid marquee porch. 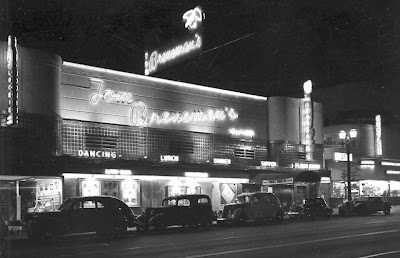 Over time the dining space became more streamlined and pleasant, copying the appearance of rail dining cars. Many had a curved barrel vault roof-line. Brand new materials were quickly adopted, like sleek and colourful Formica and glass blocks. The Daily Politics blog wrote in AMERICAN DINER that diner manufacturers smooth­ed the lines of the restaurant, cov­er­ed the wooden frame in silver and added coloured neon even inside the diner. The sleek, streamlined and silver diner had black-and-white vinyl floor and a long shiny grill for the short-order chefs to work on. Pastel colours were never seen; everything was silver with regular splashes of bold colours.

It is probable that stools would have saved space and made for speed­ier meals, but it is unlikely that women would be happy squatting on top of a stool. Thus installing tables throughout the length of the diner would make it more family-friendly. Some stools were left up against the counter, but most space was allocated to booths. 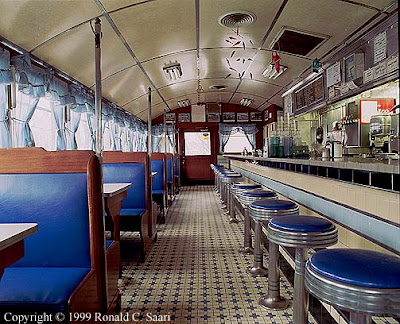 A question remains. The good times and Art Deco largely ended in 1939 when WW2 started. Clearly diners of the 1950s were created long after the Deco era had ended, so why were stain­less steel, neon lights and other art deco elements retained, even though the central role of the counter may have been lost? Examine the 1950s diners in the blog called Diners, Drive-in Restaurants and other road­side stuff eg Diner Hotline’s Top 10 Massachusetts Diners. Also see the blog Diner News and History.


Pres­umably the firm connection between diners and Art Deco had been so strongly forged in the earlier decades that the emergence of a new era was no excuse to mess around with beloved diners. Four elements were important: friendly service, speed, decent-ish food and Deco decor.

It is so nice to find a old diner when travelling around the states. Long may they last.

Helen, just to point out a couple of details, the Salem Diner dates from 1941 and Rosie's Diner, though originally located in New Jersey is actually now in Rockford, Michigan (the photo you show is the Michigan location).

I absolutely love this post and the last photo is my favourite!! I love the Art Deco style and it really does go well in diners.

As an American, I've never thought much about the history of the diner (or its architectural history). For me, diners "always already" are a staple of American life. I wonder if this is part of the reason why the architectural style did not vary after WWII. I would imagine that Americans found diners to be a stable, constant part of American life (especially with its unchanging architectural design); diners may have been comforting and reliable to Americans after the trauma of WWII.

Thank you everyone. Great comments.

Tired of London Tired of Life has written about Fatboy's Diner At Trinity Buoy Wharf in London's Docklands. London's own American diner might have been built in 1941 in New Jersey and eventually imported to the UK.

"The first diner was created in 1872, by a man named Walter Scott (Witzel). He worked at a printing press, and decided to sell food out of a horse-pulled wagon (Sawyer). He sold to night workers, and patrons of mens’ clubs. Scott then decided that his business was sucessful, he then quit his job and sold food full time ("American Diner Museum "). Scott’s diner can be considered the first diner with “walk up” windows that were located on each side of the wagon (Witzel).The first recorded diner was a horse-drawn wagon equipped to serve hot food to employees of the Providence Journal, in Providence, Rhode Island, in 1872. Walter Scott, who ran the lunch wagon, had previously supplemented his income by selling sandwiches and coffee to his fellow pressmen at the Journal from baskets he prepared at home. Commercial production of lunch wagons began in Worcester, Massachusetts, in 1887, by Thomas Buckley. Buckley was very successful and became known for his "White House Cafe" wagons. Charles Palmer received the first patent (1891) for the diner. He built his "fancy night cafes" and "night lunch wagons" in the Worcester area until 1901.
[edit] Worcester Lunch Car Company

In 1906 Philip Duprey and Irving Stoddard established the Worcester Lunch Car Company, which shipped 'diners' all over the Eastern Seaboard. The first manufactured lunch wagons with seating appeared throughout the Northeastern US in the late 19th century, serving busy downtown locations without the need to buy expensive real estate. It is generally accepted that the name "diner" as opposed to "lunch wagon" was not widely used before 1925. Many diners still exist in the Worcester area.
The Bendix Diner in Hasbrouck Heights, New Jersey, is an example of Art Deco style and neon signage.

A Bayonne, New Jersey, man by the name of Jerry O'Mahony is credited by some to have made the first "diner". The Jerry O'Mahony Diner Company of Elizabeth, New Jersey, produced 2,000 diners from 1917 to 1952. Only approximately twenty O'Mahony diners are still in existence throughout the United States and in certain parts of the world. In the U.S., the northernmost is Martha's Diner in Coventry, Vermont. The Summit Diner, a 1938 model, is located in Summit, NJ. The oldest southern diner (non–stainless steel style) is believed to be the Hillsville Diner in Carroll County, Virginia. The Triangle Diner,[3] a 1948 stainless steel O'Mahony original model, is located in the old town of Winchester, Virginia and is currently being historically restored to how it appeared in 1948. The Triangle Diner is the oldest stainless steel style O'Mahony diner in the State of Virginia. In 2007 Tommy's Deluxe Diner was moved from Middletown, Rhode Island to Oakley, Utah where it opened as the Road Island Diner. One of the original ones displayed at the 1939 New York World's Fair, made by Paramount Diners, is still in operation as the White Mana in Jersey City..." etc.

Anon
thank you for that.

I had been interested in the spread of Art Deco architecture after the 1925 World Fair in Paris and was delighted to see the American diner adopt that style as its own.

But there will be many people who will want to go back to the 1870s, so you have added valuable information.

a few years ago I would not have thought of "celebrating" a stable part of life, with unchanging architectural values.

But as we get older, constant change is often seen as upsetting and disrupting. It is great to be able to rely on something beloved from childhood. There is precious little to celebrate.

you are quite correct. Many thanks.

My mistake came from the fact that Wilson's Diner was manufactured by the Worcester Lunch Car Company!

Loved this and am going to repost on my blog, with links to you of course.

I am glad you enjoyed my post, but I don't know what you mean by reposting it to your blog. It sounds ominous.

I loved the lecture on Art Deco and diners in the USA. Did we have any diners in Australia back then?

good question. I can find art deco architecture all over Australia, at least until the war broke out in 1939, but I cannot find mention of an American-style diner here. Perhaps someone will help us.

Good Evening,
I am currently a student at the University of Texas. I am enrolled in an architecture class and I happened to choose Art Deco Diners as my research topic. I was curious if you knew more than what you mentioned in the blog post, or if you had any good sources that I could consult?

Thank you for your email. I have been writing art, architecture and history posts since 2008 and this is still one of the most popular posts I have ever written. Only the history of Californian Bungalows got way more readers (100,000).

Here are three books I enjoyed:
1] Art Deco Architecture: Design, Decoration and Detail from the 20s and 30s, by Patricia Bayer, 1999
2] American Diner Then and Now, by Richard J. S. Gutman, 2000 and
3]The American Diner by Michael Karl Witzel, 2006.
They are for the interested non-professional reader, not for architects.

You make so many great points here that I read your article a couple of times. Check out metal roofs service in North Miami

Many thanks. Do you write books or journal articles about Art Deco architecture?