Ned Kelly, Australia’s most famous bushranger, was part of a Irish- Catholic-Australian family who lived in the North East of Victoria. The entire extended family was constantly in trouble with the police and courts, usually over low level crimes like cattle-duffing. Most people then (and since) believed the police were more corrupt than the criminals. 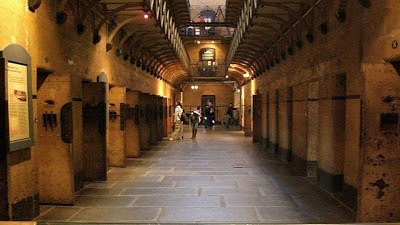 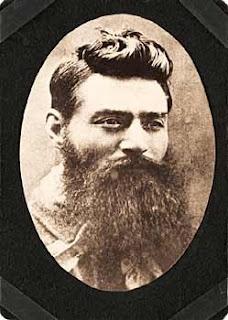 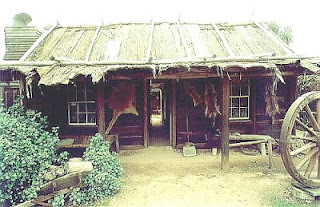 That changed in 1878 when the Kelly Gang’s low level crimes changed to bank robberies, hostage taking, derailing trains and killing of policemen sent to capture them. In response to these killings the Victorian parliament did two things. Firstly it passed the Felons' Ap­prehension Act which outlawed the gang and invited any­one to shoot them. There was no need for an arrest and trial. Sec­ondly they posted a £8000 reward in Feb 1879 for the capture of the gang!

Since the Kelly Gang’s rampage of 1878-80, Ned Kelly has been de­scribed by many, especially the police and courts, as a crim­inal, thief and killer. For fewer people, he was seen as an oppressed, impoverished family man who railed against colonial authority and colonial injustice. 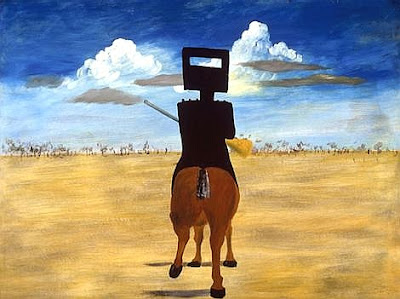 
In the arts, we find the same div­ide. Anderson Brown's Literary Blog responded to Peter Car­ey’s novel: “The Irish identity of Kelly and his family, and the economic and le­g­al injust­ices to which poor transported Irish were subjected by the col­onial authorities, are among the real subjects of the book. Ned is a stub­born enough force of nature to hold our symp­athy without hero­ics”. Stephanie Trigg at humanities researcher was working on Ned Kelly’s associations with Robin Hood. She felt the pres­erv­ation of Kelly’s last boot spoke volumes about the iconic status of Kelly, and the myst­ique and veneration in which he is held. It looked very much like a saint's relic. Bartlett’s Blog suggests that the Kelly saga was a story which showed how one injustice can breed another, and how systemic oppression often begets violent responses. According to Bartlett, this is a lesson we still seem not to have learned 130 years later.

Over the decades the change in community perceptions about Ned Kelly has been slow but constant. Now I am suggesting that Sidney Nolan’s most famous art work, a series of stylised descriptions of Ned Kelly in the Australian Outback 1946-7, played a very important role in the change. I am not inter­ested in issues of connoisseurship here; just in Nolan’s iconography.

Nolan’s Ned Kelly series followed the main sequence of the Kelly story. However Nolan did not intend the series to be an authentic history of these events. Rather the series became the setting for the artist’s thinking about family, loyalty, injustice and betrayal. Because the tragic Depression and WW2 had just finished, Nolan had a challenge. He wanted to create and de­fine episodes in Australian nationalism, to retell the story of a hero. I would not have chosen Ned Kelly as a national hero, but Nolan’s Kelly became a man who resisted tyranny and pursued freedom at any cost. 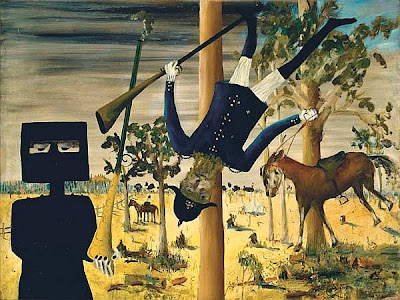 
The iconography was simple and powerful. In Ned Kelly 1946, the sim­ple geometry of Kelly’s armour suited modern art. Nolan just placed a pair of eyes into Kelly’s helmet which added life to its austere shape. The Death of Constable Scanlon 1946, now in the National Gal­lery Canberra, showed a somersaulting police trooper, a startled horse and a tent. The Trial 1947 depicting Ned Kelly in the court room, surr­ounded by the judge, police and jury.

Nolan clearly wanted to give his audience an insight into Australian history. His series created an artificially simplistic picture but either fostered or created the view that Ned Kelly, in his abstracted armour, was an Australian icon.

Above all, he considered that it was ‘a story arising out of the bush and ending in the bush’ eg matthewham discussed the complete fusion of Kelly with his horse, something I had not thought of myself. Remember that the Kelly story did not belong in Australian cities. Instead it was a way for Nolan to paint the Australian landscape with new eyes, with the story creating a special awareness of NE Victoria’s landscape.

Nolan himself acknowledged that his depiction of Kelly, with a black, square and impenetrable mask was difficult. But for some reason, he supposed to do with the nature of the century or with modern art, it worked out well. Nolan realised this was a story he could put into the landscape by investing the human psyche in a very simple shape. 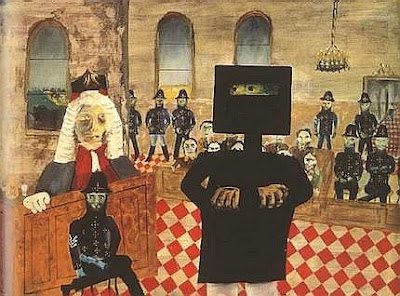 Heide in Melbourne was where Nolan painted the first canvasses in his Ned Kelly series. Eventually, in 1977, the series was given to the National Gallery of Australia. Heide Museum of Modern Art also has examples of Nolan's work.

Hels, Thank you so much for including the link to my blog, and I am adding your link to my blogroll. As to Ned Kelly, in fact my interest was in Peter Carey, who as you may know enjoys a considerable reputation here in the US (I may have read he lives in NYC now, not sure about that). One of my main interests is Irish literature and that extends to literature of the Irish diaspora, although I was reading Carey as an Australian writer and only discovered reading the book about the Irish connection. Carey's book is great for his mastery of (or invention of, either way) Ned's dialect, and of course North Americans approach something called True History of the Kelly Gang in the spirit of the western genre and specifically the revisionist western (e.g. McCarthy's Blood Meridian). An Irish novel set in the 19th century that I would mention would be Joseph O'Connor's Star of the Sea which explores territory similar to Carey's. Also the HBO television series Deadwood which I highly recommend.

It took me a good few months to figure out some of the technical basics, so it’s worth persevering with.

Thank you Anderson and Andrew. I have been amazed at how much interest this post aroused, the second most read post that I have written in nearly two years.

This suggests to me that Sidney Nolan might have been correct; his Kelly _became_ a man who resisted tyranny and pursued freedom at any cost. And since the responses have come from well outside of the circle fascinated with Australian history, we have to assume that the theme of resisting tyranny appeals to the hearts of people in many countries.

hi hellen i liked your review about Sidney Nolan's artworks do you mind if i use your review for Visual Arts school assignment? I will not forget to include your name.

You can find the blogs that I cited by pressing on the underlined words in my post above.
Good luck with the assignment... it is a great topic.