Le Corbusier and the Bauhaus

1. raise the building from the ground on pilotis, to reclaim the lost space under the house;

2. build non-weight-bearing walls to free up the designer;

4. include long, sliding windows to bring the garden inside the house; and

5. create rooftop gardens to replace the green land swallowed up by the concrete block. 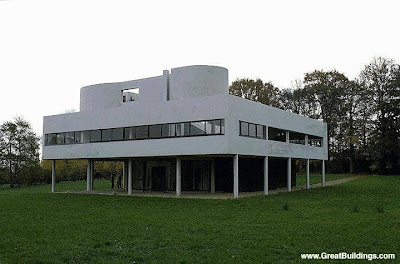 The Bauhaus School of Architecture did not actually get going until 1927, eight years after Bauhaus first opened its lecture rooms and workshops. And by that time, Walter Gropius, Mies van der Rohe and the other Bauhaus architects were very familiar with, and committed to Le Corbusier’s philosophies. Le Corbusier may not have lectured at Bauhaus’ Weimar or Dessau campuses, but his theories were enth­us­iastically read by the staff and students. Bauhaus architects agreed to use principles of classical architect­ure in their most pure form: without ornamentation of any kind. Thus they rejected cornices, eaves and decorative details. Bauhaus designs had flat roofs, smooth facades, cubic shapes, neutral colours (white, cream or grey), open floor plans and functional furniture. 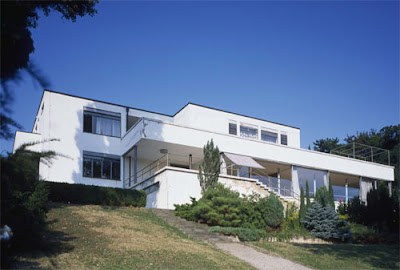 Compare Le Corbusier’s Villa Savoye with a] Villa Tugendhat in Brno, built by Mies van der Rohe in 1930 and b] Gropius’ house in Lincoln Mass, 1938. They were in three different countries, but Mies van der Rohe and Gropius were definitely paying homage to the master and to his five principles of domestic architecture. 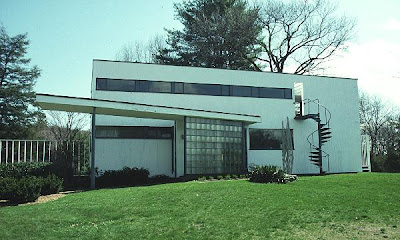 In my post called The Bauhaus Moved to Tel Aviv, I wrote “German Jews who made aliya in the l930s brought with them the then-newest architect­ural ideas: the modernist ideas of ar­ch­itects Le Corb­usier and Walter Gropius”. It occurred to me that I better display a Le Corbusier house, and two Bauhaus designed houses, in order to explicate the link to Tel Aviv. To be sure Tel Aviv Bauhaus architects built blocks of flats, not individual homes. Furthermore they were building in a hot, Mediterranean climate, not a cool northern European or northern USA climate. But the European masters would have recognised their contribution to Tel Aviv’s architectural stock. 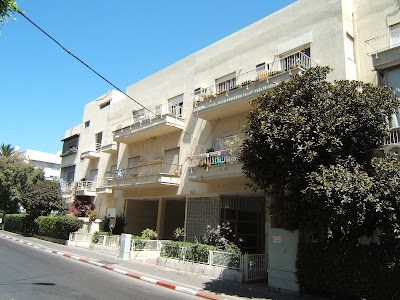 Would the Architectural Technologies blog have recognised their contribution? In 2009 the post Smart Sweet Smart Home discusses future buildings having non-weight-bearing walls to free up the designer; creating an open and flexible interior floor plan, free of weight-bearing walls; including long, sliding windows and doors to increase light and airflow; and creating rooftop gardens to increase warmth in winter and coolness in summer. Short of the computerised Greenness, I think Le Corbusier and the Bauhaus architects would have fitted the bill nicely.

Villa savoye is one of those buildings I never get tired of admiring. It is just the perfect realization of Le Corbusier's principles. A masterpiece which would truly stand the test of time.

Have a look at the post coming out today on modern furniture design and see what you think of comparing the Eames in the 1940s and 50s to Bauhaus designers of the 1920s.

Thank you. Villa le Lac is an example example that I was not familiar with.

It is particularly interesting because Villa le Lac was started in 1923, years before Le Corbusier created his landmark design in 1929, Villa Savoye. Yet even then, he seems to have developed his modernist design principles - single-storey, small, reinforced concrete, long, sliding windows, flat roof and flexible interior partitions and furniture.

Are you talking about building on stolen land? Bauhaus was destroyed by the Nazis. And Tel Aviv is nothing but the making of a new Nazi regime. Looks like history doesn't teach us anything except to be worse than our own enemies!

The Bauhaus institution was closed by the Nazis but Bauhaus skills, architectural concepts and values were not destroyed by the Nazis. Villa Savoye in Poissy was the perfect example, displaying Le Corbusier’s architectural laws that could be taken to other cities around the world. Tel Aviv was an excellent example.