Neue Nationalgalerie was the sole European building that Ludwig Mies van der Rohe  (1886-1969) designed, after he departed for U.S in 1937 amid the rise of the Nazis. Its design qualified it as one of the more elegant struc­tures of its kind anywhere. Mies, famous at the Bauhaus School that was closed by Nazis in 1933, always prioritised funct­ion­alism over déc­or­ation dur­ing his career. And like many of his other works, this build­ing was mostly made of industrial materials like steel. From the out­side, Neue Nation­algalerie (opened 1968) is unusual, since much of the art on view can’t be seen from its glassed-in second-floor façade. 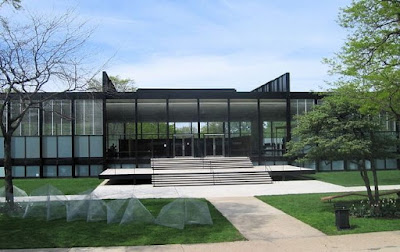 Crown Hall at Illinois Institute of Technology Chicago.
This was the centre-piece of Mies’ larger campus plan, just before WW2.
The Art Story

Neue Nationalgalerie was planned as a vital cornerstone of the cult­ural centre Kulturforum, situated between Landwehr Can­al, Potsdamer Platz and Tiergarten Park in central Berlin. The site was once a resid­ent­ial area built in the C19th, but parts of it were torn down by the Nazis to give space to Hitler and Speers’ New Berlin. Kulturforum was to become a modernist answer to Museum Is­land, and Neue National­galerie was to become its centrepiece.

The gallery’s history was closely linked to the pol­­it­ic­al division of Germany and of Berlin post-WW2. The founding in 1949 of two Ger­man states, with different pol­itical systems and diff­er­ing id­eologies con­cerning the role of art in soc­iety, marked the end of a unified col­l­ection. And with the division of Berlin, most of the cult­ural buil­dings finished up on East Berlin’s side of the wall. As a res­ult, plans for West Berlin’s new cultural centre started in the 50s.

National­gal­erie’s collection, first shown at the Museum­sinsel Ber­l­in then at the Kronprinzen-Palais on Unter den Lind­en, was origin­al­ly managed by the Greater Berlin Authority. The West Berlin au­th­or­ities wanted to rebuild the collection by setting up a Gallery of the C20th.

In the late 1950s Mies van der Rohe had already been comm­is­sioned to design a new office for Cu­b­an liquor Bacardi, in Santiago de Cuba. He planned a large roof plate supported by 2 col­umns per side and in concrete, instead of steel. Bacardi fell through, but when Mies was invited to des­ign the Ber­lin museum in 1961, he used his Cuban id­eas, although diff­erent in scale. The new museum was said to be an hom­­age to Schink­el’s Altes Mus­eum on Museum Island.

The archit­ect’s new museum had to house both the collection of C19th art and the Gallery of the C20th. Mies’ long-term preocc­upation with creat­ing fluid, open spaces led to the des­ign of the upper pav­ilion of the gallery. This open-plan flexible space was very different from trad­itional museum idea of a closed building with exhibition rooms. 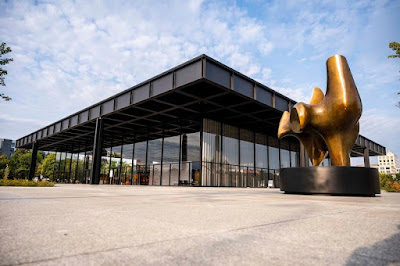 Neue National­gal­er­ie by Mies
Opened in 1968
In Sep 1965, Mies travelled to Berlin to lay the foun­dation stone. And two years later he attended the most spectacular con­struction stage: hydraul­ically raising of the gigantic steel roof into place. Note Mies’ designed the upper exhib­it­ion hall and the giant floating steel roof plate, resting on 2 cruciform steel pillars on each side. The glass walls and the open floor plan created a space, made possible when Mies put most of the build­ing's space under the podium i.e all ser­v­ice areas, offices, exhib­it­ions spaces and café. It was Mies’ last building project.

When it was built, the museum was standing on the edge of what was then West Berlin. The building’s architectural structure ch­ang­ed lit­tle but the urban setting in which it stood under­went rad­ical chang­­es. Thanks to the reunific­ation of Germany and of Berlin, and the en­suing construction heart at Potsdamer Platz, Neue National­gal­er­ie was no longer in a wasteland but in the busy city centre.

The Staatsbibliothek emerged at the same time as the Neue National­galerie, on the opposite side of Potsd­amer Strasse, and was follow­ed by the Kammermusiksaal-chamber music hall erected next to the exist­ing Philharm­onie. These buildings were joined several mus­eums in the form of the Kulturforum (as above), and after German reunific­at­ion, by the urban redevelopment of Potsdamer Platz. 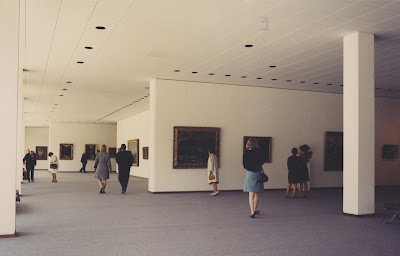 Neue National­gal­er­ie, airy galleries
Opening day in 1968
The New National Gall­ery shows C20th art: Expression­ism, Cubism, Bauhaus, Surr­eal­ism and works by Pablo Picasso, Ernst Ludwig Kirch­ner, Joan Miró and Wassily Kandinsky. It was opened Sept 1968, sig­nalling the start in West Ber­lin’s cul­tural rebirth. And with its steel roof and aust­ere architecture, Neue National­gal­erie stood in honour to a vis­ion­ary C20th architect. He died shortly after (1969)
In the decades after­ward, the Museum began to age, and British arch­it­ect David Chipperfield was asked to repair it in 2012. The museum was reopened in 2021 following $168 m renovations. Now in Jan 2022 the museum hopes to become a UNESCO World Her­it­age site. Thanks to The 25 Best Museum Buildings of the Past 100 Years and Atlas of Places.

It is my favourite Art museum in Berlin. I have memories of going there with my art tutors in 2006 and then a few months later during the Biennale with a friend.

When we studied the Bauhaus in lectures, I was impressed with Mies van den Rohe from the beginning, let alone 35 years after the Nazis closed the Academy. Brilliance lasts.

well done! I asked a number of my students and colleagues if they had visited Neue Nationalgalerie and if they enjoyed it. Only one person did :(

Persoanlly speaking, I enjoyed the Bauhaus, Expression­ist and Cubist art on display but mostly I crawled all over the Mies architecture.

I added Crown Hall at Illinois Institute of Technology Chicago in my post here because Mies' architecture in the inter war era was already modern and stunning. I know why the Nazis closed down Bauhaus in 1933, but it was a self-destructive move that saw all of the talented lecturers and students move their careers instead to other countries.

But Mies was a very old man in 1968 and I am therefore delighted that his style was still much loved in Berlin.

Hello Hels, I was just looking at the Neue Nationalgalerie’s website. Their collection has some great pieces to match the beauty of their building. I was further impressed that they have a department that investigates the provenance of each work of art in their collection, especially those acquired c.1933-45. They didn't have much discussion about their conclusions or actions taken after investigating provenance, but perhaps a little more research could did that up information.
--Jim

This place seems to have a fascinating history, along with some major artists. Do you know who created that intriguing sculpture outside?

I agree with the Museum website that all collections have the responsibility to examine and confirm their art objects' provenance. But how much more so for Neue Nationalgalerie where the art was often acquired through Nazi theft, blackmail or damage.

After the end of WW2, Prussia's public art collections, particularly royal and Jewish treasures, were scattered across the world. The Prussian Cultural Heritage Foundation began its work decades later but I imagine Western Berlin faced a lot of problems in relation to East Germany. Thank goodness Neue Nationalgalerie has continued its vital investigative work.

it is very intriguing, yes. The sculpture was called The Archer, created by Henry Moore in 1966. A second cast of this Archer came from The Tate (I believe) and now has pride of place in Neue Nationalgalerie Berlin.

The buildings in photos do look elegant. I like Crown Hall but not so much Neue National­gal­er­ie. I think you really need to experience such buildings in person.

I agree that all cultural facilities need to be experienced in person. Partially because of personal taste, but also because of the era in which the facilities was designed and the location in which it was built. So I might have loved Neue Nation­algalerie had I seen it in 1939 in Germany, but not if I had visited the same design in Ballarat in 1880. Architects change and visitors change.

I can tell from your blog that you are passionate about museum collections... me too, as long as the curators document the objects well enough for visitors to understand.

Additionally this particular museum invites us to examine the architecture.

Hi Hels - thanks for this - I'd love to visit Berlin sometime - I have artist friends who've spent time there ... it's a hub for the creatives. Cheers Hilary

yes you MUST :) Architecture by itself is well worth visiting eg Reichstag, Brandenburg Gate, Gendarmenmarkt, Memorial to the Murdered Jews of Europe etc. And that is before you even see your first museum, gallery or musical centre eg Museum Island.