Carl Fabergé (1846-1920) was born into a St Petersburg family that created jewellery. Young Carl, trained in Russia and Germany, was in the right place and the right time. When he took over the family bus­in­ess, he created a firm that became closely linked to the romance, glamour and tragedy of the Romanovs. 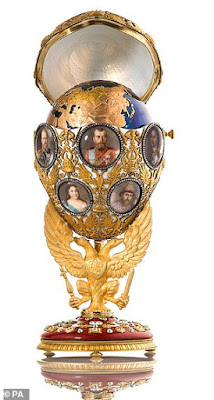 Romanov Tercentenary Egg,
made from gold, silver, diamonds 1913
Moscow Krem­lin Museums
Four factors led to his success, bringing him to the att­ention of the Russian Imperial Court:
1] His work co­incid­ed with the rise and fall of  the Romanovs, from their vast wealth to their abrupt deaths.
2] He had great creative skills
3] He had beautiful crafts­manship and
4] He used precious metals and gorgeous gemstones.
He worked in the Hermitage's Jewellery Gallery and by the mid-1880s was named goldsmith and jeweller to the Russian court. His works were first displayed at the 1882 Pan-Slavic exhibition held in Moscow under the patronage of Czar Alexander III. See examples of the work from the 1880s. 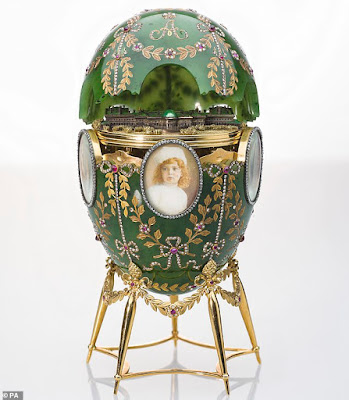 The Alexander Palace Egg, Fabergé,
gold, diamonds, rubies 1908
Moscow Krem­lin Museums
Fabergé began making Imperial Easter eggs when Tsar Alexander III com­missioned one as an Easter present for his wife, Tsarina Maria Feod­or­ovna, in 1885. It became a Romanov tradition for the next 3 decades. There were 50 surviving Imperial Easter eggs in collections around the world, the most famous being manuf­actured under the gold­smith's direct supervision between 1885-1917.
3 Imperial Easter eggs created by Carl Fabergé are being lent by Moscow Kremlin Museums to the UK for the first time. Altogether the V&A will display 200+ of the most stunning or­n­aments ever produced. Fabergé in Lon­don: Romance to Revolution will run from Nov 2021-May 2022, Covid allow­ing.

The Fabergé story may have been quite familiar to the world, but less well known was his UK branch, the only one out­side Russia. The V&A Ex­hib­ition will explor­e Faberge’s little known success in London; the shop that op­en­ed in Dover St and moved to New Bond St London in the Edwardian era attracted a client­ele of roy­alty, nobles and wealthy bus­inessmen. Faberge had been famous for creating intricate, golden be­jewelled orn­aments for Russian Tsars to give to their wives, but appar­ently rich British husbands loved them also. It closed in 1917. 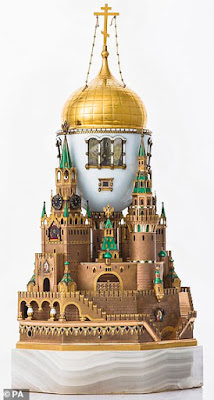 The Moscow Kremlin Egg, Fabergé.
Gold, silver, onyx, glass, enamel 1906
Moscow Krem­lin Museums
By far the largest Imperial egg sent to the V&A was the Moscow Krem­lin Egg (1906), which was inspired by the architecture of Dormit­ion Cathedral in Moscow. In the base of the egg was a gold music box that had two traditional Easter hymns, played when the clockwork mechanism was wound up. The hymns were favourites of Czar Nicholas II.
The Kremlin Museums’ next treasure was the Al­ex­ander Pal­ace Egg (1908) which featured the children of last Tsar Nicholas II & his wife Alex­andra. The richness came from diamonds, gold, rubies and jade; the min­­iature watercolour paintings on ivory were also stunning. The de­tailed rep­l­ica of Alexander Palace, the Imperial family's favourite home in Tsarskoye Selo, was made of gold, enamel and rock crystal.

Finally the Romanov Tercentenary Egg (1913) had very rich materials: gold, silver, diamonds, turquoise, porphyry, rock crystal & watercolour painting on ivory. The egg celebrated the tercentenary of the Romanov dynasty, 300 years of Romanov rule from 1613-1913. The egg was decorated in a chased gold pattern with double-headed eagles as well the Romanov crowns that framed the Tsars’ portraits.

Through Fabergé’s creations, the exhibition will explore timeless st­or­ies of love and blatant social climbing. For example see a Faberge cigarette lighter given to Edward VII by his mistress, Alice Keppel. The Queen has lent the V&A some of the royal Fabergé collection, incl­uding personalised pieces made for King Edward VII and Queen Alexand­ra. And the Basket of Flow­ers Egg, comm­is­sioned in 1901 by Nicholas II as an Easter present for his wife.

Carl Faberge married Augusta Jacobs in 1872 and had 4 surviving sons: Eugene (1874-1960), Agathon (1876–1951), Alexander (1878–1952) and Nic­olas (1884-1939). The House of Fabergé was nationalised by the Bol­sheviks in 1918. Carl Fabergé left Petro­grad by train for Riga, then to Germany. The Bolsh­eviks gaoled his sons Ag­ath­on and Alexander. Mrs Fabergé and Eugène crossed the border into Finland in Dec 1918. Alex­an­der later escaped from prison, and Agathon left the USSR for Finland with his family. In 1924 Alex­ander and Eugène successfully opened Fab­ergé in Paris. 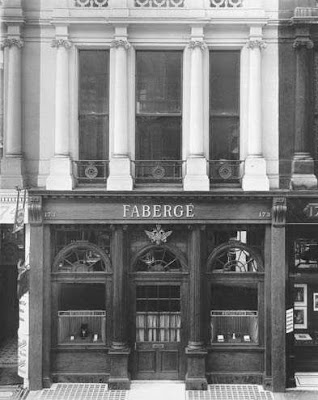 Faberge's only shop outside Russia
New Bond St, London
Closed in 1917
Kieran McCarthy wrote the book Fabergé in London: The British Branch of the Imperial Russian Goldsmith (2017). It is of great interest to fans of the decorative arts, the Edwardian Golden Age and European Royalty.
Posted by Hels at 20.7.21

Russian yes, but do you remember Faberge's connection with the Huguenots? The relatives were Huguenots from Picardy, but like the other Huguenots we examined in lectures, they had no choice but to leave France after the revocation of the Edict of Nantes. His relatives moved to Berlin and then to Baltic Russia. No wonder his father was a specialist jeweller and Carl a goldsmith.

Amazing that I have to read a blog from Melbourne to find out about an exhibition in London. I'll have to check that out as it sounds like one not to miss.

*blush* I did not remember Fabergé's Huguenot ancestors. But once the Huguenots were sent into exile from France, they took their gold and silver skills with them to Britain, Germany, South Africa and Netherlands. Young Carl was genetically gifted AND well mentored. Perfect!

I am on the exhibition mailing list from most of my favourite galleries across the world, and before Covid, I could fly out to some super exhibitions each July. Now I am dependent on galleries sharing their treasure via Zoom, thankfully.

Your post takes me back several years ago to my visit in Moscow, particularly the Kremlin. Such a richness of things, you didn't know where to look first.
Carl Faberge was born in Russia , yet both his names: first and family, have a foreign sound attached to them: german and french, and that might probably explain things about him and his jewelery work.

Hello Hels, A long time ago I think that I told you how I was able to attend a blockbuster Fabergé exhibit in Cleveland. Perhaps due to my dis-admiration of the imperial family, I was not so fond of this exhibit, although it is undeniable that the workmanship was stunning. But much more impressive was was walking over to another gallery and stumbling across a world-class exhibit of the incredible rowing paintings of Thomas Eakins (some of which belong to Cleveland, although for that matter they also have some Fabergé pieces) that no one even looked at due to the huge Fabergé exhibit.
--Jim

You are very fortunate to have seen the Faberge treasures in Moscow because it seems that people understand and appreciate their own architecture, literature, music and art of their own culture more than that of any other nations.

However Londoners will have a wonderful time going through the V & A Exhibition, especially since London had an important link with Faberge i.e Carl's only shop outside Russia.

Your dis-admiration of the imperial family is totally understandable.. the precious metals and jewels in the Czar's Easter Eggs alone would have fed Russia's starving working class for a week. Of course that would eliminate examination of most of the royal and aristocratic patronage of the arts across the universe. During the Highland Clearances, for example, the tenants were thrown off their landlords' land and lost their jobs/food/cabins so the landlords could use their solely land for sheep. I am very still very hesitant about seeing the aristocracy's patronage.

And seeing the Thomas Eakins works, even accidentally, was well worthwhile.

I prefer my gold, silver, enamel and jewels more linear and uncluttered :) But the Faberge art is so beautifully designed and crafted that is still stands out for us moderns.

I wonder if we can get that exhibition out to Melbourne? Although the insurance would be very expensive, I imagine! These art works are breathtakingly beautiful!

There is no reason why not... I remember at least 2 Faberge exhibitions in Australia.

1. "Treasures from the Kremlin: World of Fabergé" in 1996, at Powerhouse Museum. Note five magnificent Fabergé eggs, complete with diamonds and rubies, with miniature portraits on ivory. And
2. 18th and 19th century Russian artworks were exhibited at North Adelaide's David Roche Foundation in 2019. "Triumph & Tragedy: Catherine, the Romanovs & Faberge" showed 150 pieces of the most decorative arts.

Hi Hels - his story is fascinating ... and I'd love to see it. I did see some at an exhibition I went to at Goldsmith's Hall a few years ago ... his work is quite extraordinary, or rather his imagination and thus creative ideas. It'd be a wonderful exhibition to visit ... cheers Hilary

as much as I love paintings, architectural and porcelain art, I am passionate about gold, silver, enamels and jewels. Have a look at the gorgeous WORLD OF FABERGE catalogue I found from 1996.