Swiss cities have some of the best cul­t­ural venues in Europe, a joy for tourists and scholars. Aviel Cahn, Grand Théâtre dir­ect­or, high­lighted Gen­eva’s museums, perform­ance venues and flourishing contemporary art and music. 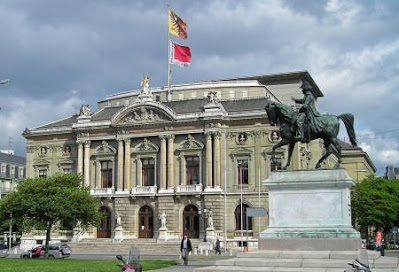 The Grand Théâtre
Geneva (pop 205,000) is a smallish city with a huge cult­ural impact and artistic community, and historical literary and humanit­arian herit­ages. Theatre, visual arts and film came late to Geneva. Then a new theatre opened: Comédie de Genève. The special fac­il­ity, design­ed by FRES Architectes, was one of the most advanced theatre buil­dings in Switz­er­land. And the Grütli cultural centre showed con­temporary cinema and ex­perimental theatre.
For contemporary art to establish itself in Geneva, it took artist John Armleder to inspire others. Today the scene is rich, with int­erest­­ing artists, and galleries like Wilde Gallery. Of the art instit­ut­ions, see the Musée d’art moderne et contemporain and the Centre d’art contemporain, the city’s Kunsthalle. And note the Fondation Bodmer with its great collection of manusc­rip­ts and early books.

Art Geneva has brought new energy, and the fair is im­proving each year. Its director has launched initiatives like the bien­nial Sculpture Gard­en. It recently included a monumental sculpture along the lake.
Dance also came late to Geneva, especially contemporary dance. The Grand Théâtre has just appointed its Director of Ballet, a Sadler’s Wells cho­r­e­­o­grapher from London. There is a large festival called La Bâtie each Sept, inviting major contemporary theatre, dance and music productions to Geneva. Pavillon de la Danse is a place that regularly gave young ch­or­eographers the chance to develop their skills. But dance is thriving in other venues too eg Bâtiment des Forces Mortrices, an old factory in the middle of the Rhône, was turned into a wonderful theatre. 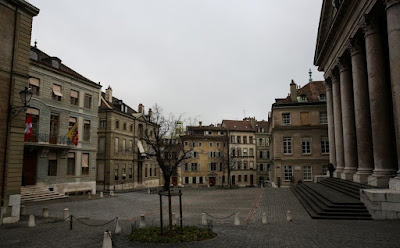 Old Town
The Old Town is a maze of small streets and charming squares, fil­l­ed with attractive cafés, restaurants, galleries and museums, lined by his­torical buildings and their mas­onry fac­ades. The favourite sites are Maison Tavel Museum of Geneva’s Hist­ory and the Old Arsenal/Battery in front, Place du Bourg-de-Four Square and Treille Promenade-Artillery Post. And the Cathedral.
The C12th St Peter’s Cathedral was vital to John Calvin (1509-64), French theologian & reformer in Geneva in the Protestant Reformat­ion. The cathedral has since developed an interesting architect­ural mixture, including towers for pan­oramic views over the city and lake. The excavated arch­aeol­ogical site beneath the cathedral rev­ealed the city's rich history and exp­lored Christianity’s Cen­t­ral Europ­ean or­igins. Examine the undergr­ound pas­sage connect­ing the cathedral to the ad­jacent International Museum of the Reformation, pres­enting the era’s historical importance.
Built to honour the greats who influenced the movement, the sculpture documented the Protestant Reformation that took place in the C16th. The Reformation Wall was built in 1909 in University of Geneva, originally founded by Calvin. 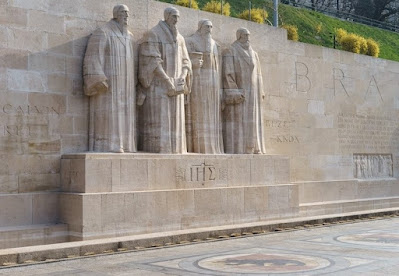 The Reformation Wall
University of Geneva
In this post, I was inter­ested in whether Calvinism slowed down C20th theatre and vis­ual arts in Gen­eva, although not music. The Orch­es­tre de la Suisse Romande, founded 1918, was one of the leading symph­ony orchestras in Switzer­land. The Grand Théâtre, built 1879, used to be a rather insul­ar, old-fashioned place, ser­ving only an estab­lished aud­ience. Now there’s a new rest­aur­ant and a terr­ace for night parties.

St Pierre Cathedral gallery
Best day-trips from Geneva? For lovers of the picturesque arch­itect­ure of Geneva’s Old Town, then the historical houses & chat­eaux around the lake are striking eg Villa Diodati, where Mary Shelley creat­ed Frank­­­en­stein, and Chateau de Coppet, once home to Mad­ame de Staël. Montreux-Vevey is worthwhile, to see Chap­lin’s World Museum and the Chât­eau de Chillon. The Jura mountains are wond­er­ful, with great wine-producing villages between Geneva and Lausanne eg Mont-sur-Rolle.

Now my favourites. The Ethnographic Museum of Geneva was founded in 1901. People could visit the 300,000+ objects and docu­ments until the Ethnographic Museum was filled! Then in 2014 the museum exhibits mov­ed in the new buil­ding by Zurich archit­ects, Marco Graber and Thomas Pul­v­er. This bright building with bevel­led façade has an Archives of Human Differences, showing how different cultures evolved and separat­ed. 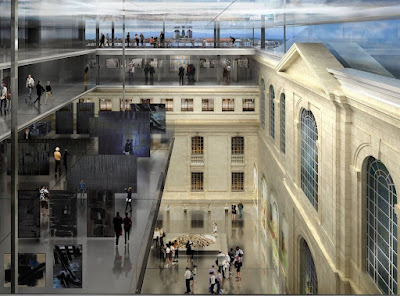 Museum of Art and History
Geneva’s Museum of Art and History, built and op­ened in 1910, was the city’s larg­est art museum, home to an ex­tensive collection by Swiss artist Jean-Etienne Liotard. With 7,000+ ex­hib­­its on dis­play, the Museum rang­ed from prehistoric to modern works. Them­at­ically categor­ised col­lect­ions were shown, with import­ant finds from antiquity in the Archaeology Dept.

The Department for Applied Art was personally set up for me, exhibiting Byzantine Art, icons, musical instruments and textiles. Another section was dev­ot­ed to fine arts and housed coll­ec­tions of paintings ranging from the Mid­dle Ages to the C20th. The collections also had many works by Ferdin­and Hodler, Félix Vallotton and Jean-Baptiste Camille Corot.

Alfred Baur lived in Geneva from 1900 and collected art objects on bus­iness trips to the Far East. Over 45 years he bought classy Ch­in­­­ese and Japanese art objects and ritual artefacts, making the Baur Coll­ec­tion a great site. The antiques in­cluded cer­amics or jade, snuff boxes, Jap­anese prints, netsuke/small fig­ur­in­es, furn­it­ure and swords. Later Baur bought an elegant house near the Art and History Museum and the Russian Church as a site for his collection, accessible to the pub­lic.

Helen, I wonder if Geneva being a French speaking city has helped make it a cultural centre of Switzerland. We spent a week there and loved the experience.

The Villa Diodati is a great house in the village of Cologny, and Château de Coppet overlooks the historic old town between Nyon and Geneva, both of them on the shores of gorgeous Lake Geneva. The first was a favourite of Lord Byron, Mary Shelley and Percy Bysshe Shelley. The second was the favourite home of famous writer Madame de Staël. The atmosphere was still powerful.

Geneva was part of the historical region of Savoy, but it declared independence from the Holy Roman Empire because the city was strongly Protestant while the rest of Savoy stayed in Catholic France. Geneva, still French speaking, became recognised as the Heart of the
Protestant Reformation. The city became important because of transport, retail trade, banking, tourism, insurance, administration, literature and, as we have seen, museums and theatres.

The architecture of Geneva is very special, but the two houses you enjoyed are somewhat out of the centre of town. The views of Lake Geneva are gorgeous, the green parks have summer concerts and the train trip from town is only 20 mins.

Not only the writers themselves loved the peace and safety; they gathered others around them as well. Germaine de Staël, for example, made Coppet one of the creative salons of Europe.

Hello Hels, I instinctively knew that Geneva would be full of such treasures, but you have spelled them out for us. I just looked at the site of the Baur collection, and while their website is a bit wonky, Mr. Baur obviously concentrated on the choicest pieces.
--Jim

I would not have known about the Baur Foundation except that I had been interested in traders and diplomats who worked in the East then brought their treasures home with them, when they returned to Europe. Alfred Bauer had bought what he loved himself, but he said his collection improved greatly when he met and trusted an expert art dealer in Kyoto.

Later on, once he started to focus on Chinese ceramics, Bauer understood he would have to buy a substantial house in the centre of Geneva to act as his museum. If only we could do that with our books and catalogues in Melbourne!

I've never been to Geneva but been several times to ski in Switzerland. Zurich is also very nice but without the enormous cultural clout of Geneva. There's something entirely unique about Switzerland as a country; it's like no other. The air is pure and sweet, the food is superb and the prices are astronomical! The citizens all appear to be keen to comply with any by-law. I can't imagine there ever being riots in the streets... 😉
CLICK HERE for Bazza’s reassuringly rhadamanthine Blog ‘To Discover Ice’

I know French, German and Italian histories very well, and their art histories even better. And have travelled in those three countries many times. But not about Swiss history!! So what is it about Switzerland that makes the country (wrongly) appear to be boring, too obedient or too multilingual to deal with?

Traveller says what makes Switzerland so calm, clean and organised is the attention to detail given to typography, graphic design, architecture, quality transport systems, composition of public spaces and respect for the landscape. Banks are trusted and private information is kept private.

I think that, in Switzerland there is no 'edge', everything seems ultra-safe and under control. I have a memory of sitting in a train in Winterthur near Zurich and watching the station clock and, as the second-hand reach the top, the brakes were released and the train began to roll. It's that kind of precision, (think watchmaking), that helps to foster the image of being boring - but it's not!

Your post has tempted me to add Geneva to my list of places to visit. It looks really interesting.

precision, yes. A place can become a beautiful cultural city if money is poured into architecture related to music, literature, theatre, opera, galleries and so on, especially (in my opinion) if the money comes from the state or Federal government rather than private sources. But cultural facilities can equally be destroyed, from war bombing or takeover by an extremist regime etc.

If covid ever ends and air transport is normal again, I too much re-visit :)

For the first five years of our marriage, spouse and I travelled everywhere, living VERY basic hippy lives but having a wonderful time. Now I plan to go back, but this time with a much greater appreciation of cultural facilities and with more money for food and a hotel room.

Informative blog. Are you looking for the Architecture in Jaipur to build up a new house or a building? We visualize, ideate and implement - residential, commercial and industrial projects.

many thanks. Have you been to Geneva? Did you enjoy the architecture of the cultural facilities?