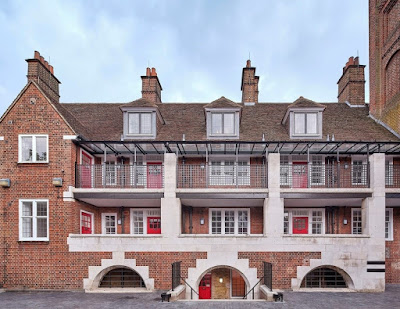 The many warehouses along Cotton's Wharf were filled with tons of trade products that burned in June 1861. The Establishment quickly got to the scene and 14 fire engines were fighting the blaze, but they couldn’t get an imm­ed­iate supply of water since the Thames tide was out. By evening the fire st­retched from London Bridge to Custom House, taking a fortnight to extinguish and costing millions.

In 1862, the insurance companies told the Home Secretary stating they could no longer be responsible for London’s fire safety. Growing London needed a larger, pub­lic authority. In Jan 1866 the Metropolitan Fire Brig­ade commenced as a public serv­ice. That year Tooley St became one of London’s oldest fire stations, built as a result.

British fire fighters had always lived in their own homes, but it was dif­f­icult to reach them in time when uncontrolled fires raged. Thus many fire stations provided rental accomm­odation for the firemen and their families above/near the station. The families saved rental costs and also loved seeing their husbands/fathers each day.

With redbrick facades and arched doorways, London's fire stations were easily identifiable. Some even still had their original red doors, or fire-carvings over the doorways. Many were repurposed due to Council cuts or demolished.

Belsize Fire Station was designed and built in the Arts & Crafts style in 1914 by architect Charles Winmill for London County Council. The station was used by fire fighters and engines until 2014 when it was closed due to council cuts. London architects upgraded the Grade II-listed building and turned it into 20 homes. Below street level, the fire ­fighters' sleeping spaces were converted into 1-bedroom flats.
Thank you to Londonist for the histories and photos.

Former Bethnal Green Fire Station in London Rd was built in 1889 then used until 1968 when it became Lon­don’s Bud­dhist Centre. The New Beth­nal Green Firestation is still functioning in Roman Rd in a plainer building.

Bishop­s­gate Fire Station opposite Liverpool St station was used as a fire station between 1885-1964, closing when a replacement station was opened in nearby Barbican. The upper floors are now offices.

Brompton Fire Station functioned as intended from 1893-1964, in South Parade off Fulham Rd. The NHS took over the Grade-II listed Brompton Station as a sleep disorder clinic. 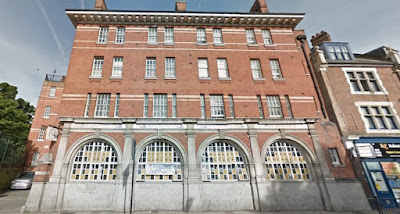 Lewisham Station
and accommodation for firemen and families.

Old Lewisham Station in Lewisham High St was built in 1898 and used until 1956, when it was replaced by New Lew­isham Fire Station. It prov­id­ed housing for the on-call firefighters and stabling for their horses. The Grade-II listed ground floor are now offices; the upper floors became housing.
The former Mary­le­bone Fire Station aka Manchester Square Fire Station, was built in 1889 as one of London's first purpose-built fire stat­ions. It was decommissioned in 2005, then restored and converted to the Grade-II listed Chiltern Firehouse Hotel.

Perry Vale Station in Forest Hill open­ed as a residential fire station in 1901, hous­ing firefighters and their fam­ilies, and closed 70 years later. It was used as a council office until 2008, then became housing. The large garage-like doors still stand out clearly. 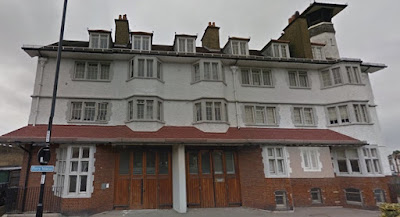 Waterloo was built as a fire station in 1910 to replace a fire and ambulance station that previously stood on the same spot. It still has original feat­ures, including the tiled lettering over the door, and fire buckets hanging from the ceiling inside. It's Grade-II listed.

Before Westminster was built in Greycoat Place, there had been another st­ation in nearby Francis St. The listed 1906 building functioned as a fire station for a century, before being one of 10 stat­ions that clos­ed in Jan 2014. In Dec 2016, planning permission was granted for a restaurant in the ground floor and basement, and 16 flats upstairs.

Whitefriars Fire Station opened on Carmelite St in the City in 1887 and closed in 1964. Today its used as an unlisted office block. 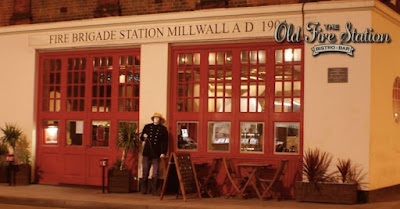 That was fascinating Hels. I especially liked the last section. The Londonist is a good source of information. I often use it.

I know your interest was in saving the architecture, but read the Guardian comment on closing down fire services. "Since 2010, more than 10,000 firefighters have been axed, dozens of fire stations have closed, fire engines have been scrapped and levels of emergency rescue equipment has been slashed. In London, 10 fire stations have been closed, 27 fire engines axed and more than 600 firefighter posts have been cut. Every year response times are increasing and 2015-2016 saw a 15% rise in fire deaths compared with the year before".

written by Andrew Scattergood
The Guardian
16/6/2017

A really fascinating and comprehensive story (as ever!). Many Fire Marks can still be seen on London's buildings. One needs to 'look up' when exploring in the city! The cutbacks that Joe mentions have carried on unabated...
CLICK HERE for Bazza’s closely concomitant Blog ‘To Discover Ice’

nod there are wonderful sources of information on line, but I wish I had found The Londonist earlier.

that is a catastrophe waiting to happen! Oh wait, the catastrophe already happened :( The Grenfell Tower tragedy of 2017 not only killed 70-80 ordinary residents; it traumatised the survivors, fire fighters, ambulance staff and neighbours for ever.

there were reports, reviews and analyses on EVERY aspect of the Grenfell Tower fire, yet you note that the cutbacks have carried on unabated. London is my favourite city anywhere, so I find the entire story incomprehensible.

While I knew about the insurance companies fire fighting in London, I did not know about the subsequent history. I suppose you know why our inner suburban fire stations closed? Their doorways were too narrow for the much larger modern fire trucks.

Thanks... it is not often you can leave me speechless.

I can perfectly well understand that 19th century fire station doorways, which had been large enough for horse drawn vehicles, had to be enlarged in the inter-war era. Only in that way could the new, larger motorised engines could be parked inside the fire station and could get ouside as soon as the bells rang.

But we should have dealt with that problem 70 years ago!! And if our fire engines are growing wider still, then it shouldn't be beyond our smartest architects to widen the double doors.

The Norwich firestation is exactly the same as the Norwich one. The Norwich one was changed to a school about 5 years ago and the fire station moved outside the city centre. Coincidentally there was a story in the local paper last week about living in the flat at the top written by the daughter of the station master during the 1950s. In recent years Norwich has had some serious fires in the city centre within sight of the fire station (while it was still the fire station) and in both instances the fires took over and the buildings were completely destroyed! The Grenfell fire fighters failed the residents in telling them to stay in their flats instead of running for their lives, by the way. Survival instincts tell you to run and those who ran survived.

Sorry meant to start that comment with the Lewisham firestation.

thank you. I was focusing on Greater London, only because of the ease of retrieving the historical information. That is why I didn't include Norwich, even though the issues we raised were probably even more tricky, well away from the capital city.

I read all the Grenfell Reports over the last few years, but I am not sure _even now_ that the human race has fixed all the problems with huge towers. Could tragic events happen again?

Hello Hels, Fire stations have unique architecture due to their imperitive demands, and so many of the old ones managed to have grace and charm as well. I am glad that so many of the old ones were saved. I wonder what the never replacement ones look like--I imagine not as classy. The thought did cross my mind about inadequate fire protection with all those closings, and from the other comments this is apparently a real concern.
--Jim

All I was saying was that in spite of the fire station being within seconds of the fire in the case of the City Library, they still couldn't save it. Nowt to do with politics, just fact, the fire took over and beat them. I watched the flames licking up to the sky as I walked to work. I understood why you focussed on London but it struck me the similarity with our fire stations here and of course the Fire Service worked to a national plan of design so I thought I would mention it.

Fire was such a tragedy in old, crowded cities that the history of fire prevention, equipment, staffing and success/failure in extinguishing fires became historically important. Thus the fire stations really had to be preserved, whether they were used for the same purpose or not. If a city cannot afford to pay for a fire station and its staff, then the building should be given heritage status and saved for another purpose. With a plaque added on the front.

I am grateful you said that the National Fire Service oversees the facilities all around the country. Today only Scotland and Northern Ireland have centralised fire services, so their authorities operate as committees of their devolved parliaments. What are the funding guarantees in all the other Council areas in the UK?

I said worked in the past tense - I was referring to building designs. Funding today comes from Central Government and local Council Tax.

Wow, that is a wonderful survey, thank you Hels!
My yearning to see London again grows and grows.
In the meantime I will try to take a photo of the tiny Fire Service in the little village in Bavaria :-)

If you have a photo of the fire service in Bavaria, I would love to see it. All you need to tell me is the town, the year in which the building opened up and what the building is used for now.

understood, nod. Now I will have to look at the Victorian and Edwardian buildings in Melbourne and Sydney.

what a horrible event :( Brazil’s most important scientific museum was destroyed by fire in 2018, along with its archive of 20 million items. It was the biggest natural history museum in Latin America, and the loss to science, history and culture was incalculable.

Hi Hels - thanks for all the history ... so many fires, with the ever worrying situations ... Governments don't seem to be able to address necessary problems ... that affect lives and families and leave them 'waiting' ... so many still wait to have no stress, no worries - can government realise what the general public affected by these 'omissions' in life ... I feel for them so much. Thanks for this - Hilary

You are quite right...Local and state governments don't seem to be able to address necessary problems, and federal governments don't seem to be remotely interested. I asked my youngest grandchild how the various levels of government expect to tackle fire crises in the future, if their services face constant cut backs. The 10 year old said it was simple: each house or block of flats will be responsible for its own safety - via careful design in the first place and then lots of hoses etc.

Fire stations and firefighters are a very relevant topic to our daily life.
I'm not familiar with the fire stations in London, but judging by your post, they have a rich history and architecture. Thanks for sharing.

In daily life everywhere, yes. It is not possible to register (as protected) all Victorian architecture that played an important role in national history, but these treasures are special. If the buildings are repurposed, they will need a plaque or historically-relevant decoration on the front.