Square dancing, from the USA to Australia 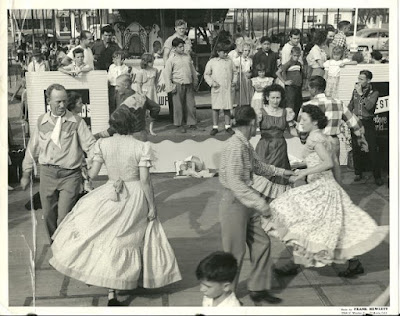 Square dancing teams, c1950
California
Americans loved square dancing in the 1930s which grew out of trad­itional folk dance in the American West and out of folk dances in Scotland. American servicemen took the dance back to the UK late in WW2.

From Jim’s Website, I know an American caller named Leonard Hurst, stationed with the American services during the war, led American servicemen and local girls dancing at Townsville’s Red Cross Recreational Centre. He later married an Australian and made Adelaide his home. But Eddie Carol had been trying to popularise square dancing ever since he learnt to call as a young lad, with little success and much opposition from “proper” dance promoters.
But the growth of square dancing in Australia really dates from the first Victorian event that took place at the Teachers' College summer camp at Queenscliff in 1949. Two young women who returned from Japan had been introd­uced to square dancing by American occupat­ional forces in Japan. They attended the Teachers’ camp, to share their knowledge of square dancing.
Also at the camp was Bill McGrath, a lecturer in physical educat­ion. Square dancing had long interested him so it became a regular activity at the Melbourne Teachers' College. In March 1950, the Teachers' College held a square dance in Melba Hall at Melbourne Uni, attended by 400+. Many other demon­strations were given across Victoria in 1950; 6,000+ people went to the Melbourne Town Hall to see the Hollywood Square Dance Contest.

Jack Murphy was another Melbourne caller who developed his skills at Bill McGrath’s square dance camps. Square dancing in Vic­toria became very competitive; the first Vic­t­orian Cham­pionships were in 1950 in Prahran Town Hall.

In the summer holidays, Ranelagh Estate Mt Eliza people bought a set of Texan caller Joe Lewis' records and got tog­et­her to dance to them. Lewis' first visit to Australia was in 1950 when he played to big crowds in Syd­ney. It was the second visit of Joe Lewis in 1951, organised to conduct the Women's Weekly’s £6,000 competition, that gave square dancing its much needed boost.

Adelaide's first club was launched by American Leonard Hurst in 1951 at Sundowners which was a training ground for future callers. Young Melbourne journalist Jim Vickers-Willis (1918–2008) flew weekly from Melbourne to call at the Palais Royal, as did Graham Stone. At one square dance for beginners at Centen­nial Hall Adelaide, McGrath called for 4000 dancers; outside Parliament House in Melbourne, there were 8000 square dancers! 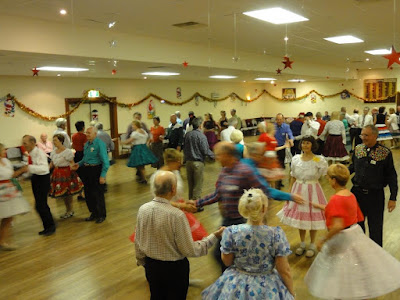 The dress code in Australia was determined by the National Conventions Advisory Board. Attire for men had to in­clude a buttoned, full length sleeve shirt, with a cravat, and dress boots. Attire for women had to include the wearing of a full dance dress or skirt and long sleeved blouse, complete with discreet underwear and low-heeled shoes.

Carol was the official caller for the Austral­ian Championship. judged by Joe Lewis. In Sydney after the competition, Eddie Carol was invited to call at Trocadero, one of Sydney's biggest ballrooms. To cater for the overflow of dan­cers, other clubs were opened at Brighton early in 1952. The craze was spread­ing; by late 1952 the Square Dancing Society had 100+ clubs and more callers were being trained.

The big ballrooms soon realised that square dancing had taken a good hold and that ball­room dancing would probably suffer. In Sept 1952 Earl's Court St Kilda opened for square dancing, as did Leggett's Prahran. Jim Vickers-Willis, who had been dancing with the Brighton club, made a successful radio broadcast from the Earl's Court dance!

Jim Vickers-Willis was born in North London and emigrated to Aus­tralia with his parents as a schoolboy. He worked as a cadet jour­nalist for Melbourne’s Sun Herald newspaper, and during WW2 served as an RAAF instructor in the Empire Flying Training Scheme in Canada. Flight Lieutenant Vickers-Willis flew Spitfires etc, as recorded in his War Diary. After the war he returned to journalism, married in 1947, had 4 children and ran a mobile canteen.

Jim became one of Australia's highest paid entertainers in this 1950s Australian square dancing boom. He called for thousands of dancers each night in Melbourne and Adel­aide's largest ballrooms, beamed by radio into Australian homes.

1950s Aus­t­ralian square dancing resources, including music, news clips, photos and Jim's best square dance recordings are in the Australian Square Dancing archives.  Articles writ­ten by Jim and by Jack Murphy tell us their stories of the Aust­ralian 1950s boom. At one time, Jim's "Lets Go Square Dancing" Programme on ABC 2 TV was hugely popular. Jim also did the first outside broadcast for Channel 7 Adelaide, televised from the Palais Ballroom. 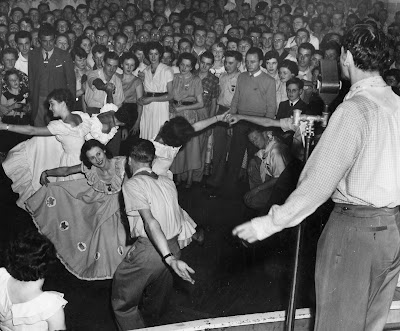 The caller is very important to the event's success

What was different about Jim's calling style? He used a unique Australian Hoedown style rather than American hillbilly: 1. The dancing was fairly simple, often repeating 6 to 8 basic steps for most of the night. 2. The calling was mostly directional with each step being called, rather than calling a phrase that required a movement. 3. The singing was melodic rather than country, for Australian audiences. And 4. Jim introduced a degree of sport into his square dancing because Australians were sports mad.

Jim Vickers-Willis was very thankful for the talented musicians that formed The Australian Square Dance Band which supported him, variously including the following instruments - piano; drums; violin; accordian; trumpet; guitar and bass. But at the height of his fame in 1954, 36 year old Jim contract­ed polio and was placed in an iron lung for life support. [A Salk polio vaccine was discovered in 1955, but this was a year too late for Jim]. Thankfully he emerged out of the iron lung and, although dis­abled, continued his career in entertainment, writing and therapy.

My parents went square dancing every Saturday night until 1955! Apparently there are still c200 club venues around Australia today.

I asked my parents why they loved square dancing in the 1950s. Easy. No spare money, no TV and lots of friends.

There are over 160 active square dance callers and approximately 200 clubs located throughout Australia. You can dance daily, weekly, fortnightly or even monthly if you wish.

Each club offers something different in it’s own special way. Perhaps you could try to visit and dance at as many clubs as possible to experience the wonderful diversity in Australian modern square dance.

To see the National Diary of Events across Australia, contact http://www.taws.info/taws/diary.lc

timing is everything, isn't it? When my dad was demobbed after the war, he had to go back to uni to finish his studies. And by 1950, they had 2 babies and not a wonderful income between them. So like your parents, they loved square dancing which was a cheap source of entertainment, dressy, musical and very social. My mum loved music more than anything.

many thanks. Your national diary of events is so widespread, I was very impressed. Are there enough fans in Australia to keep such a widespread programme busy?

Do-si-do. What a fun post and I had forgotten about Jim Vickers-Willis. There was square dancing for me at school in the 60s to 70s. It was great fun. My sister on the Bellarine will be impressed when I tell her square dancing started in Queenscliff post war R&R. No wonder she looks up to her older brother with his wide knowledge.

No wonder sis looks up to you :)

We were so British after WW2 and into the 50s and on, I assumed any cultural part of Australian life would _not_ have come from the USA. But the more I read about traditional western square dancing being promoted in the USA's inter-war era, the more I see the pleasure that couples could have. All the old photos suggest that American square dancers were right into the fun.

I didn't think you would know about Anglo Saxon square dancing... all the South Americans I know were excellent, sexy dancers. Square dancing is respectable and not remotely sexy or exotic :)

Hello Hels, Along with Robert Benchley, I am a "militant non-dancer." As you and your commenters say, it was an available and inexpensive pastime, but so are picnicking and hiking or walking in the parks, which is more my style. If I lived in Australia and were broke, I would head out to the gold and opal fields on weekends--or are they too far from "civilization" to get there often?
--Jim

Our israeli folk dance resembles perhaps the american-australian square dancing. It's based on no tradition. Created just for fun, in the spirit of return to the land of the Bible, and mweant to deepen the love for the country and landscape.

Hiking is healthy and to be recommended, but it can't replace singing, dancing or listening to music for those who love those activities. Same for opera, ballet, fancy dress parties, pantomimes, charades or any other indoor functions.

Covid ended all the above, cultural or more adventuresome, for 16 months anyhow :(

Yes! Both dancing systems are energetic, informal, friendly, loud and very sociable. I learned all my Israeli dancing in the mid 1960s, checking out the males for their boyfriend potential :)

Dear Hels (I know you have another name, but cannot find it, sorry):
Square dance is fascinating!
As a German girl I sometimes saw a bit of it on TV and was impressed by the accuratess of the dancers.
When I studied in Mainz the American soldiers and their families still lived there, and they had a square dance group too.
I wonder about one thing you write: how did they make sure that you wore modest underwear (you used another term, but I think I understood it right)? :-) Britta

The dress code was very important because it established square dancing as a family-friendly, clean cut and respectable form of entertainment. Compare with cancan dancers, for example, when the police supervised all performances to ensure the women a] were wearing knickers and b] weren't soliciting (as prostitutes). Even the men had to look traditionally respectable in square dancing.

My real name is Helen :)

We were taught Scottish country dancing at school which came in very handy at the many 'Barn dances' I attended as a young mum. There would always be a caller to make sure everyone could join in.

Hi Hels - I was taught dancing at school ... but having no sense of rhythm, or being not very musical I never really progressed ... but I always enjoy watching and joining in when I can - Fun60 mentions Barn Dances - fun times ... excellent reminder post - cheers Hilary

there is something memorable about music and dancing that came from trad­itional folk cultures, and as we can see from peoples' responses, those traditions could have come from USA, Israel, Scotland, Greece, Georgia etc etc. Practically everyone is welcomed, whether they are superbly talented or not.

thank you. Do you have any experience of Indian folk dancing from your teens?