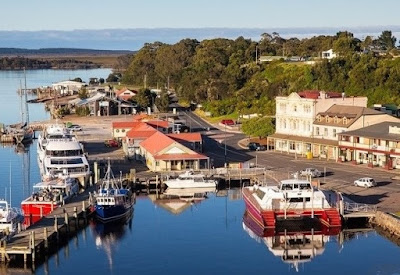 Strahan Visitor Centre, front of the wharf
and Huon Pine Sawmill behind 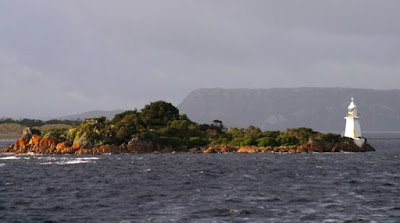 Hells Gates and Cape Sorell Light­house
The area around Macquarie Harbour in SW Tasmania was home to the Too­gee Aboriginal people for thousands of years, but only until c1830. The first Europeans to ex­plore the harbour were James Kelly and mates in Dec 1815. They spent 3 days exploring the harbour and the Gordon Riv­er, and reported on the vast stands of trees that led to timber cut­ters arr­iving. The cutters chopped the magnificent huon pine whose wood was ideal for ship­building.
This led to a new penal colony at Sarah Island. The British sent the worst criminals to the harbour island by 1821, leading to a brutal penal colony on the rugged island. The first sett­lers arrived in Jan 1822: 14 con­vic­ts, 16 sold­iers and families. But why choose Sarah Isl­and? Water had to be shipped from Phil­lips Is­land 6 km away; femal­es were separately placed on Grum­met Island; and the work condit­ions were hor­rendous. By 1826 the gov­ernor in dis­t­ant Hobart realised the situation was hopeless.

Named for Gov Lachlan Macquarie, this 50km long har­­bour op­ens to the Great South­ern Ocean via narrow and danger­ous wat­ers; called Hells Gates by the convicts. As many ships from UK were wrecked there, met­res from their trip end, a sig­nal station was created on Cape Sor­ell to en­sure safe traffic. Standing 40m high, Cape Sorell Light­house (1899) met increas­ing demands from silver and zinc mines at Mt Lyell, Zeehan and Queenstown who were shipping their ore from St­rahan. Over time the light­house out­buildings were dismantled; now only the light­house stands. Visitors can sail be­tween the shore & rocky island that is Hells Gate.

One of Sarah Island's most infamous men was Alexander Pearce who es­c­aped in 1822 with 7 other convicts, and attempted to cross the is­l­and to Hobart. In time, all the men died except for Pearce. Cann­ib­alism? In 1823 Pearce escaped with the convict Thom­as Cox. Hungry Pearce kil­l­ed and ate Cox, and when he was finally re­captured he ad­mitted to cannibalism, twice! He was executed.

The penal colony on Sa­rah Island finally closed in 1833 when the convicts were mo­ved to Port Arthur settle­ment. The solid brick buildings were destroyed but the scale of the penal colony clearly showed the harsh reality of early European life.

Strahan lies at the northern shore of the wild, savage and unspoil­ed beauty of Macquarie Harbour, 41km SW of Queen­stown. The port was known as Long Bay and Regatta Point, but when Strahan township start­ed in 1877, it became the port for Mt Heemskirk tin mines. It was named Strahan after Maj George Strahan, Gov of Tas­m­ania (1881-6).

Strahan Visitor Centre, on the wharf near Huon Pine Sawmill, offers an ideal introd­uction to Strahan and to Macquarie Harbour. The Centre’s West Coast Reflections Museum provides an excellent overview of the town’s convict and pioneering past. Boat tours of Macquarie Harbour are recommended.

In town, a handsome two-storey brick building with stucco trim on the Esplanade was built in 1900. Since then it has been used as the Cus­t­oms House, local Court House, Public Works Department, Marine Board and Tele­graph and Post Office. The early C20th Customs House reflected the importance of Strahan as it became the major port for Queenst­own’s mining works. It now houses the Parks and Wildlife Service offices.

Ormiston is a gracious Federation house built by Fred­er­ick Ormiston Henry in 1899, a successful shop­keeper who made money invest­ing in Mt Lyell mine. Today it is a smart B&B with 5 rooms; wrought iron lace­work; sq­uared posts, large bay windows, gables of local tim­b­ers; and great gardens.

Feel the wilderness of Strahan by driving to Ocean Beach: the 40 km long beach where the waves break relentlessly on the flat beach. At the north­ern end of Strahan Harb­our is the Peoples Park, a rain­forest with swamp gums. Vis­it­ors can see plat­ypus, wall­abies, quolls and possums. There is a pleasant 40 min walk re­turn to the Hog­arth Falls and bo­t­anical gardens, where the trees are clear­ly id­ent­ified for those int­er­ested in botany. The best views of Strahan and Mac­quarie Harbour are seen from Water Tower Hill Lookout.

Regatta Point Railway Station and the ABT Railway, built in the 1890s, went from Zeehan to Strahan to Queenstown. The German designer created a rack-rail system which allowed trains to pull heavy ore-loads ov­er the steep slopes between the two towns; and became an import­ant part of Strah­an and Queenstown's tour­ism. Strah­an was then the second bus­iest port in Tasmania, remaining important until the 1950s-60s. Strahan Central was the home of the self-titled Duke of Avram; now it is Bushman's Bar and Accommodation with views over Macquarie Harbour. 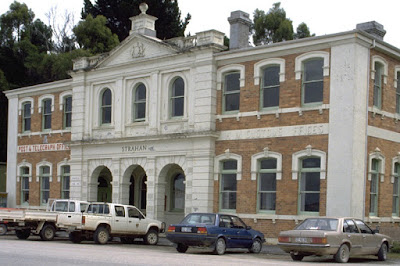 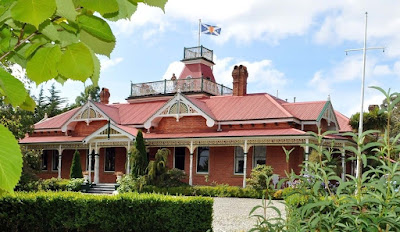 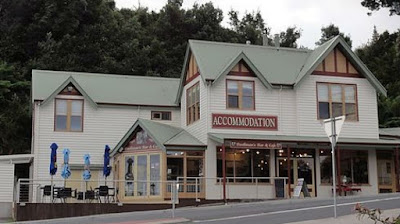 Bushman's Bar
To see the isolated and gloomy Gordon River, and its dense temperate rain­forest, is to ex­perience a World Wonder. In the 1970s-80s there was a strong belief that hydro-electricity would be Tasmania’s eco­nom­ic saviour. So the state's conservative govern­ment announ­ced that it was going to dam the Franklin River with a huge dam on the Gor­don Riv­er 40km up­river from Macquarie Har­b­our. In 1983 the Fed­eral Govern­ment decided to stop the dam proposed by the Tasmanian Hydro-Electricity Auth­ority and that the whole area would be preserved und­er a World Heritage order. This would include the Ab­or­iginal art in Fraser Cave and the dangerous Fr­anklin River. The Fr­anklin & Gordon Riv­ers bat­tle showed great pol­it­ical brav­ery and today Franklin-Gordon Wild Rivers National Park attracts 90,000+ tourists!

Visitors can see the play put on by the local theatre group: Aust­ralia's longest-running play about an escape from Sarah Isl­and, The Ship That Never Was. It tells the true story of 10 convicts who stole a ship built at Sarah Island penal settlement and succ­ess­fully sailed to Chile in 1834! 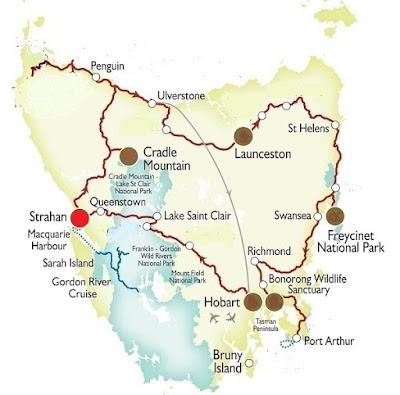 Map of Tasmania
Note Strahan and Macquarie Harbour on the west coast
Posted by Hels at 12.6.21

You might enjoy "Pubs and Publicans of Tasmania's Old West: A History of the Hotels of the West Coast of Tasmania" by Patrick Howard. The late 19th-century mining boom on Tasmania's west coast created a strong demand for accommodation. Consequently there was also a boom in the number of hotels established in the Queenstown, Strahan and Zeehan regions. The book traces the history of these hotels and shows that they were important centres for socialising, relaxing and facilitating a sense of community.

The West Coast Wilderness Railway went through some pretty rugged land, with excellent historical commentary. Jan and Feb were the best months to travel.

Hello Hels, Your story and map prompted me to look up the Google map of Tasmania. How impressive it is that the island seems to be practically all park and conserved wild areas, although dotted by hundreds of small towns. I wanted to locate Wynyard, because I have a bottle from there. It turned out to be close to Penguin, although since Wynyard has 5000 people to Penguin's 3000, I'm not sure why Penguin won out on your map!
--Jim

perfect! I had known it was important to see the old hotels established in the Queenstown and Strahan for their late 19th century architecture and interiors. But I hadn't thought about how important the pubs were as centres for socialising and creating community development.

Although the amazing views are the same, I am glad we didn't have to drive in those rugged landscapes. The train ride was far less worrying and more comfortable. And you are right.. the commentary was essential!

Good on you, Parnassus

Re my map, every town was indeed marked there. But to make the space much clearer for the blog, I deleted half of the names.

I too had to use Google to see where Sarah Island is. We know Port Arthur. Not so much Sarah Island.
We have travelled the east coast and the centre of Tasmania. The west coast is for the future, an easy holiday for older gentlemen. Should we take the car on the ferry or take a coach tour.

depending on how much control we want ourselves, on the _west coast_ I would normally recommend the trains, ferries and buses over driving independently. On the trains and cruises, for example, you can socialise with the other guests, listen to the commentaries in comfort, takes photos in your own time etc etc.

If you want to travel to _other parts of Tassie_ as well, by all means take the car on the Melbourne ferry.

I am always so proud that Australia was a _British_ colony, but those Brits treated their convicts like dirt :( At least Tasmania has documented the era very well.

I often wonder what Australia would be like today if the British had not treated it as a prison colony. No doubt its resources would still have been plundered and its indigenous people slaughtered.

Good question! In the first 50 years of white settlement, Britishers were brought here as free settlers or as convicts. Only when convicts finished their horrible sentence could they earn a living. Ticket-of-leave-holder-convicts were allowed to work for themselves, as long as they lived in a specified district.

South Australia (1836) and Victoria (1850) ALWAYS remained convict-free colonies. Penal transportation to Australia peaked in the 1830s and dropped off as protests against the convict system intensified. So we can see what happened in those parts of Australia that were NOT treated as a prison colony by the British, by analysing South Australia and Victoria.

Interesting post Hels. Magwitch in Great Expectations was my first experience of learning of the hulks with the prisoners and finding out that eventually the hulks were sailed away to Australia. As a child watching Great Expectations on BBC at 5pm on a Sunday night I found it very frightening when Pip came across Magwitch. The industrial revolution made the British upper classes more scared of criminal elements moving to cities upsetting their lifestyles so they started to ship them to Australia to get rid of them. It was a terrible way to treat human beings and we should be ashamed of ourselves. Talk about slave ships and slavery, this was just as bad.

Transportation was thought of as a kind punishment, instead of hanging. But the "crimes" people committed were actually very trivial eg theft, assault and prostitution. So we can be fairly certain that the petty crims were sent away for other reasons eg a] the ships removed the criminal element from British society and b] the colonies saved Britain from endless prison costs.

Sarah Island's homepage said that in those first years of settlement, the convicts spent their days cutting timber, usually in chains, worse in the cold and rain. The barracks were so crowded that the inmates couldn’t sleep. Floggings were regular and the food so poor that scurvy and dysentery were rampant.