The desires of both body and soul – Leonard Cohen

The Musée d’art contemporain de Montréal curator, John Zeppetelli and the show’s co-curator Victor Schiffman were deciding how to celebrate Montreal’s 375th anniversary, and how to draw in visitors who might not normally travel to see contemporary art. The curators were even happier when Leonard Cohen (1934-2016) released his 2016 album You Want It Darker at the age of 82. They wanted to celebrate a living legend, an active musician, poet and cultural figure who’d been prominent for five decades.

So Leonard Cohen: A Crack in Everything was put together with the late singer-songwriter’s blessing, shortly before his death in Nov 2016. The Musée d’art contemporain de Montréal/MAC exhibition was inaugurated in Nov 2017, a year later. A record number of 315,000 visitors attended the exhibit, one of the most viewed programmes at the MAC!

Ring the bells that still can ring
Forget your perfect offering
There is a crack, a crack in everything
That’s how the light gets in. 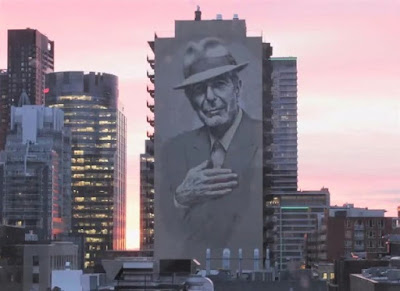 22-storey mural of Leonard Cohen
in Crescent St Montreal.
painted on his first yartzeit/anniversary of his death


The Jewish Museum calls him a world renowned novelist, poet and singer-songwriter who inspired generations of writers, musicians and artists. He was an extra­ordinary poet of the imperfection of the human condition, giving voice to what it means to be fully alert to the complexities and desires of both body and soul. For decades, he supplied us with melancholy observations on the state of the human heart, in songs such as Chelsea Hotel, Suzanne, Bird on a Wire and Hallelujah. With equal parts gravitas and grace, Cohen teased out an inventive and singular language, depicting both an exalted spirituality & an earthly sexuality. His inter­weaving of the sacred and the profane, of mystery & accessibility, was such a compelling combination it became seared into memory. He was truly the high priest of pathos.

A Crack in Everything is the first exhibition entirely devoted to the imagination and legacy of the influential singer-songwriter, man of letters and global icon from Montréal.  Beyond the works that will be created especially for A Crack in Everything, the exhibition also includes innovative multimedia environments in which Cohen’s songs will be covered and performed, based on archived writings, drawings and recordings that he produced over the past half century. And see  a video projection showcasing Cohen’s own drawings and his self-portraits.

There is an multimedia gallery that  includes commissioned works by a range of internat­ional artists who have been inspired by Cohen’s style and recurring themes in his work.  Each of the 18 artists was offered the opportunity to perform & record his own version of Cohen's comeback album I'm Your Man 1988 in a professional recording studio. The album's backing vocals were richly provided by the Shaar Hashomayim Synagogue Choir from the Westmount congregation in Montreal that Cohen belonged to all his life.

A Crack in Everything went on an international tour from 12th April 2019 until Jan 2021 at The Jewish Museum New York; Kunstforeningen and Nikolaj Kunsthal Copenhagen; and Contemporary Jewish Museum San Francisco. 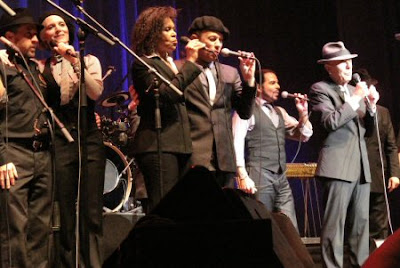 Leonard Cohen and the entire band
singing at Rod Laver Arena Melbourne, 2009
Helen was there

On the first anniversary of his death, Montreal poet Leonard Cohen was honoured with a mural on Crescent St Montreal. The 22-storey portrait took two artists, 13 assistants, 240 cans of paint and thousands of hours of work. Part of the reason Cohen gave it his blessing was because the mural was based on a photo his daughter Lorca took in 2008.

The mural is amazing. At 22 storeys high, the good people of Montreal can honour their favourite son all over the city.

Hello Hels, What a great tribute to Leonard Cohen--both the exhibition and the mural. The mural turned out extremely well--I can't imagine the process of turning a photograph into a giant painting so accurately.
--Jim
p.s. I am still reeling over the news about Notre Dame!

That mural is as high as our own building. Very impressive.

Montreal has become quite the city of murals and street art, showing off famous and less famous citizens. But none is quite as spectacular as the 22 storeys of Leonard Cohen!

fires were always the greatest nightmare for public and private buildings, before war and terrorism. But accidental fire was largely ruled out centuries ago, when timber was no longer the main building material. So what happened to Notre Dame?

I have been to Montreal a couple of times, but certainly not in the last 10 years. It is, at least in my biased opinion, a worthy tribute to the city's most famous son.

Hi Hels - I'd love the exhibition to come to London - but see it's not. I must read more of his work and make a point of listening to his albums of songs ... so pleased you've posted about him - loved his outpourings. Cheers Hilary

I have told this story before, but it is absolutely true. I met my then boyfriend (now husband) in 1969. The very first present he ever bought for me was the book Beautiful Losers (1966) by Cohen, before the Canadian became famous in music. I was so impressed, I agreed to marry Joe the very next year :)

I hope it comes here to Melbourne . Just love his work . I am trying to remember where I heard just recently that the line A Crack in Everything was his inspiration in life because he realized that that was how the light got in . It maybe was on one of Richard Fidlers interviews???????

*high 5* sister! ... I too really love Cohen's musical writing, and am still very moved by his singing as well.

The meanings of his phrases are very wide ranging and traceable, especially once we know that Cohen studied kabbalah, Zen Buddhism and the English poets. A Crack In Everything seems to have come from C16th mystic, Rabbi Isaac Luria. God created vessels into which he poured his holy light. Of course these vessels weren’t strong enough to hold such a powerful force and when they broke, the sparks of divine light travelled to earth.

When Leonard Cohen first became known in the UK, shortly after Dylan, he was ridiculed as a 'misery'; very unfairly in my opinion. I think that held him back for a long time but gradually his talent showed through. This is is a wonderful recognition of his achievements.
"I have tried in my way to be free", Leonard Cohen
CLICK HERE for Bazza’s crazily comely Blog ‘To Discover Ice’

His talent DID indeed outlive his depression. The New Yorker quoted Cohen saying: "I’ve dealt with depression ever since my adolescence…Moving into some periods, which were debilitating, when I found it hard to get off the couch, to periods when I was fully operative but the background noise of anguish still prevailed".

This clearly came through in his work. Sometimes his sadness came from specific causes like a bereavement but often it was free-floating. And it was amplified by other emotions like desolation and jealousy. Cohen’s lyrics contained very specific images that communicated the reality of depression with staggering clarity.