The Antipodeans Group consisted of 7 painters plus art historian Bernard Smith. They compiled The Antipodean Manifesto, a declaration fashioned from their commitment to modern, figurative art. The artists were Charles Blackman, Arthur Boyd, David Boyd, John Brack, John Perceval and Clifton Pugh (all from Melbourne) and Robert Dickerson from Sydney. I want to focus on just one of them.

In 1950 and in 1954, Arthur Boyd (1920–99) visited Central Australia for a month, travelling from Melbourne by train to Alice Springs. Then he went by jeep into the desert where people lived in forlorn humpies clustered on the outskirts of towns. Boyd was shocked and depressed to witness the plight of Indigenous peop­le, seg­reg­ated and dehumanised by the white population. He was equally distressed by the situation of those of mixed descent, isolated from both the indigenous and white communities, suspended in a no-man’s-land. Boyd was always the cons­c­ientious objector.

It was on the road to Alice Springs that Boyd witnessed a truck carrying a group of Indigenous brides, whose white wedding attire contrasted sharply with the rattly vehicle normally used for transporting cattle. Back at home, The Contemporary Art Society’s annual exhibition was imminent, so Boyd made a single painting based on his Alice Springs memories, to submit for that show. 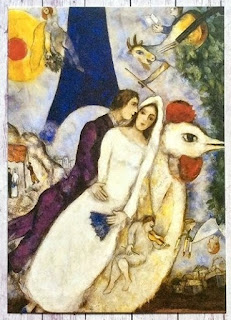 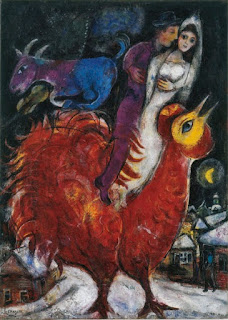 The bride theme came from Marc Chagall, a jumble of out-of-scale figures and animals, often floating in the air defying the gravity of a troubled Russian world below and of the trauma of Jewish life. Boyd loved Marc Chagall’s beautiful and serene bridal paintings, but the Australian didn’t want his own wedding paintings to be pretty; he wanted a more menacing atmosphere. We can often see a surreal wilderness in Boyd’s works, a strange place of nightmarish dreams.

Later, by 1960, he created The Love, Marriage and Death of a Halfcaste/aka The Bride series, an elaborate morality tale of an Indigenous trooper and his half-caste bride. For Boyd, the half-caste was the neglected outsider, neither black nor white, a nobody. Half-castes suffered the fate of the marginalised, isolated in a world of greed and selfishness.

The series repres­ented a peak in the artist’s career and in C20th Australian art, offer­ing a humanist critique of Australia’s racial divide. The two main protag­onists in the allegory, an Aboriginal man and his mixed-race bride, faced a love upset by pers­onal and cultural conflict. The Brides were produced in stages, with the first lot exhibited at Australian Galleries in Melbourne in 1958, then again with new additions at Zwemmer Gallery London in 1960. The series earned Boyd critical acclaim, before his 40 bride paintings were gradually spread across international public and private collections.

Boyd may have been influenced by Charles Chauvel’s film, Jedda, released in Jan 1955. The film was the first to feature Indigenous people in the leading roles, telling the story of an Indigenous girl reared by a white family who was wooed by an Indigenous outcast, Marluk. The film ended tragically after the couple were chased by the white police. Boyd’s paintings responded to a contemporary trend among artists and writers who argued in favour of improved conditions for Australian Indigenous people. Yosl Bergner, Noel Counihan, Russell Drysdale and David Boyd etc sought to make a moral issue of the desp­erate plight of Indigenous people. But I cannot tell how welcomed these comments on indigenous and rac­ial issues were, in mid-century Australia.

In 1975, Arthur Boyd gave many of his works to the National Gallery of Australia. But this collection did not include any of his works from the Bride series. In 1999, the NGA happily accepted the splendid Reflected bride 1 (1958). His painting called for recon­ciliation, understanding and a tolerant acceptance of old cultures in modern Australia. 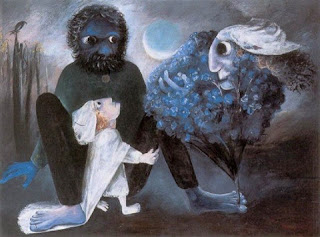 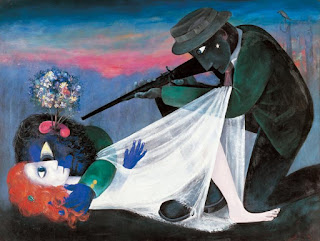 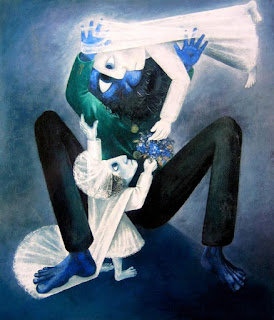 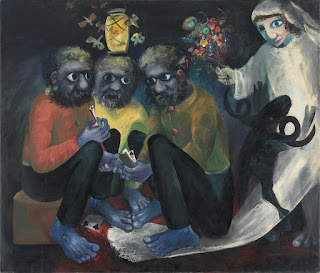 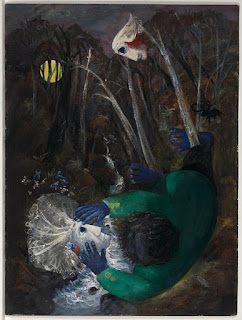 Boyd's Bride paintings from the late 1950s were reunited at Melbourne's Heide Museum of Modern Art in 2014-5. His menacing brides lined the walls of the main gallery, presenting vivid, powerful tableaux of strong, dark colours. There was a sombre and surrealist edge to many of them.

The book Arthur Boyd: Brides (2014) by Kendrah Morgan, Marcia Langton and Stuart Purves is well worth reading. Heide curator Kendrah Morgan saw the bridal paintings for the first time and was struck a] by how they were unlike anything else in Australian art back then, and b] by the political aspects of their subject matter. In terms of Boyd’s attempt to raise awareness of dis­crimination against Indigenous people and highlight social issues, the series advanced local modernism. What was new was that Aboriginal scholar Marcia Langton’s analysis represented the first indigenous reading of Boyd’s Brides. Throughout this series, Boyd’s protagonists were an Aboriginal man and his mixed-race bride - a collection of enigmatic, dramatic and ambiguous moments in their journey. Mind you, Boyd had explored these themes throughout his career: disfigured subjects, tormented lovers, beasts, fear, injustice and conflict. Also read Christopher Heathcote in Quadrant.

Hello Hels, I wonder if there is not also a feminist aspect to Arthur Boyd's Bride paintings. The men, however disadvantaged, seem real and connected to this world, while the brides seem disconnected and ectoplasmic. Usually the groom is looking at his bride, but the bride is looking away from the groom, often at some distant in time or space alter-ego of herself. Even in Three Shearers Playing for a Bride, the suitors interact with each other, while the bride, bidding for attention, goes unnoticed. What will the life of these brides will be like after the wedding ceremony is over?
--Jim

Helen Marc and Bella Chagall adored each other. No wonder marriage represented joy in his paintings.

I looked very carefully through the literature to see if Boyd made any mention of feminist issues in his bridal paintings. After all, while racism was clearly visible to Boyd during his trips to Alice Springs and the Centre, surely the oppression of women was also. But no, I didn't find anything.

Bride Running Away sold for $1,680,000 at the Sotheby's auction in 2012, a record at that stage. So perhaps viewers are now inserting their own feminist reading of his late 1950s images.

100% correct! Marc and Bella Chagall indeed had a tender love affair that brought them both much joy. So I can see why Chagall used the bride and groom as a metaphor for freedom and bliss. But Arthur and Yvonne Boyd lived out a long and happy marriage themselves, so that by itself was not a model for his ugly bridal portraits.

So I will repeat that Chagall's bridal paintings were an inspiration for Boyd, but the two artists had totally different motives for the same type of theme.

Serious and somewhat grim works, but they speak loudly.

grim indeed... and somewhat dehumanising. In some paintings that I may not have included, there were coffins.. or guns. Or there was a black crow hovering on the bride's head. Crows were closely connected with death because they fed on carrion, the flesh of the dead.

I always like to read your blog to these different types of paintings. They are really so cool.

Boyd's images are really quite disturbing while, for me, Chagall's paintings have the opposite effect. And yet, paradoxically, the influence of Chagall on Boyd's is clearly apparent. The sort of magic realism that both artists explored is something that links them.
CLICK HERE for Bazza’s powerfully pervasive Blog ‘To Discover Ice’

by the time I finished Art History at uni, I thought I knew everything about paintings from the Renaissance to the early modern era. But newer evidence and analyses keep arriving in the journals and art newspapers that are both surprising and delightful. And from bloggers as well :)

agreed. Chagall said that it was love that was the driving force of life and art, and the most protecting. Love carried lovers from the real place to the infinite one!

Boyd was struck by the poverty, exploitation and constraints under which aboriginal families lived. And he was 100% correct. But there are at least two elements that still worry us about his paintings: a] the exaggerated and ugly treatment of Aboriginal features and b] the alienation of the half-caste bride because of her mixed-raced status, especially since mixed-race children were stolen from their parents by the white Church and State.

Image Manipulation Expert said...
This comment has been removed by a blog administrator.
April 23, 2019 6:42 pm