The Chelsea Hotel in New York is where Leonard Cohen lived when he wasn't at his home in Montreal. He chose the Chelsea because he hoped to meet people with similar artistic inclinations, which he did. When introd­ucing this 1971 song in concert, he would often tell a story about meeting a famous singer (Janis Joplin) in an elevator of the Chel­sea, which led to the sex he describes in this song.

I know a great deal about Leonard Cohen, Janis Joplin and 1960s music, but the Chelsea Hotel was a mystery to me. Enter Sherill Tippins’ book, Inside the Dream Palace: The Life and Times of New York's Legendary Chelsea Hotel (Houghton Mifflin Harcourt, 2013).

The Chelsea Hotel was not created in the 1960s, as a centre of counter-culture or any other thing. It was actually built by as a very large block of flats in the Chelsea suburb of Manhattan in 1883! Architect Philip Hubert was already known for his socially aware, co-operative apartments and residential hotels, built at a time when the ordinary working families in NY were having a tough time economically. What I did not know about, before reading the book, was the Social Improvement Theory behind Hubert’s thinking, based on Charles Fourier’s utopian communities. 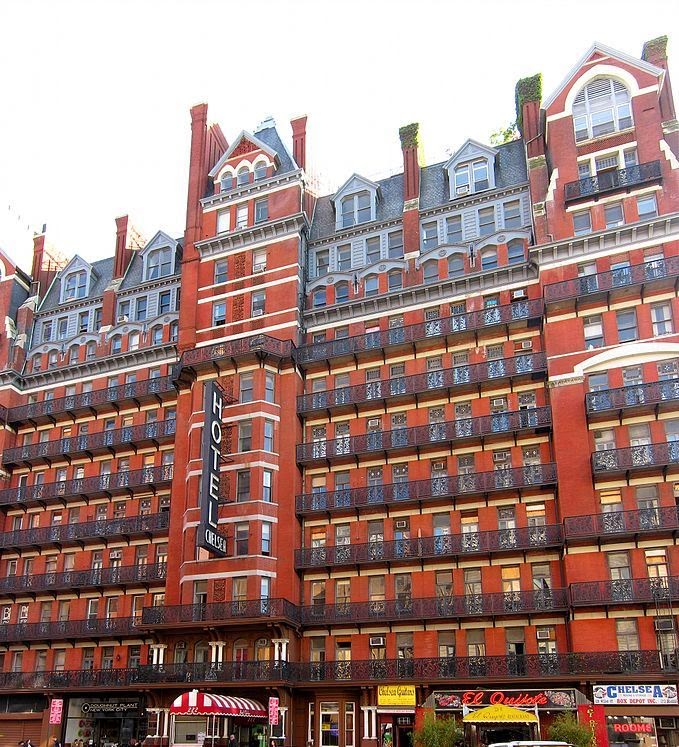 The twelve storeys were converted into a hotel in 1905, perfectly located in a centre of the New York art, theatre and music world.

So the question Tippins had to answer was how did this respectable building, with its lovely Victoria cast iron balconies, red bricks, gables and grand staircase, become the largest artists’ community and bohemian hang-out in the USA? It seems that Philip Hubert wanted the hotel to be a utopian haven for communities of artists. So the managers were instructed to set relatively cheap rentals. If music­ians and artists learned to love this home away from home, they would encourage their arty colleagues to live in the Chelsea Hotel as well.

A few generations of artists have been born, created their works and died since 1905. Yet most of the fascination about the re­sidents of the Chelsea Hotel seems to focus on the decades immed­iat­ely foll­ow­ing the end of World War Two. Young, creative and avant garde artists from the 1950s and 1960s experimented with modernity while getting drunk, getting high and getting laid. So I liked the reviewer who wrote “The Chelsea has had its high points and low, supreme artistic achievements and drug-addled suicides, sometimes in the same room”. Absolutely!

There were so many names, but I was most interested in Dylan Thomas, Mary McCarthy, Arthur Miller, Allen Ginsberg, Bob Dylan, Janis Joplin, Leonard Cohen, Gore Vidal and Andy Warhol – these were the names that most influenced my undergraduate years.

Tippins is to be thanked. “Inside the Dream Palace” is there to remind Baby Boomers that the hotel certainly nurtured and inspired all the arts, as we had hoped. But those very same artists often bitterly disap­p­ointed Baby Boomers, something we tend to forget. What was Dylan Thomas thinking, drinking himself into oblivion in the Chelsea Hotel in 1953, far away from his loved ones at home, and not calling for medical care? Why did the supremely seductive Janis Joplin allow her body to fall apart and die at 27? 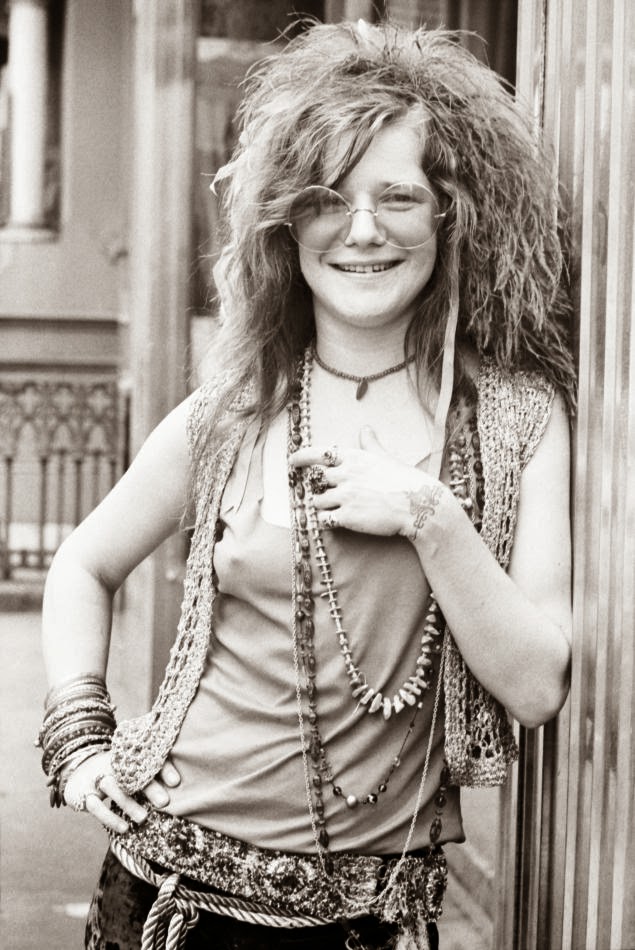 I am not familiar with Legends of the Chelsea Hotel: Living with Artists and Outlaws in New York's Rebel Mecca, by Ed Hamilton 2007, although it is clear that Hamilton’s rugged title is more provocative that Tippins’ dreamy title. Perhaps Tippins located the ambiv­al­ence more clearly. The hotel was to be a fountain of cultural prod­uctivity yet it became a safe home for counter culture. Artists were to support and encourage each other to be their best creative selves, yet they often led their colleagues into appalling, destructive behaviour. The hotel was to inspire tolerance, but during the Vietnam war and other invasions, the artists were specifically targeted by the Establishment as un-American.

New York Times July 2011 wrote: Saturday night was, by all indications, the last night that the Chelsea Hotel on West 23rd Street would accept guests, though the duration of the closing, its first ever, was unknown. The building is to be sold for $80+ million to a developer. Extensive renovations are expected to take at least a year. The hotel’s 100 permanent residents will be allowed to stay, but they have been told nothing beyond what the startled hotel workers learned late last week: that all reservations after Saturday were cancelled. The developer is said to want to keep the Chelsea as a hotel, but the plans are unclear. The building, a looming Queen Anne that opened as a co-op in 1884, is landmarked. The architect hired to oversee the renovations, said the plumbing, ventilation and electrical systems and the lobby all had to be overhauled, but added that much of the hotel’s original charm, including the wrought-iron interior stairwell and the art, would be preserved.

The building has been a designated New York City landmark since 1966 and has been on the National Register of Historic Places since 1977. While National Register listings are mostly symbolic, their recognition of significance provides some financial incentive to owners of listed properties. Protection of the historically important property is not guaranteed.

Did the opening of the High Line have an impact on Chelsea. This urban park in the sky, which opened in 2008 and was extended in 2011, exactly bisects the Chelsea Historic District to the east and the Chelsea Piers to the west.

Hi Hels,
I am a native new yorker and the history of The Chelsea Hotel is legendary. I love the stories about the rock stars who stayed there and all the goings on! I really enjoyed this post and learning more about the hotel itself. Next time I'm in the neighborhood I'll walk by and think of you!

Hello Hels, The Chelsea's history shows a long period to have a consistent purpose and community, especially in a city where such things seem to change every few decades.

The Algonquin Hotel is another famous example in New York of a place that attracted literary and creative talents, especially in the 1920's with such writers as Robert Benchley and Dorothy Parker.

I am a baby boomer as well and in the 1960s, my favourite was Bob Dylan. He seemed to live for long periods at a time in the Chelsea Hotel. With a wife, girlfriend, whoever.

cute :) When you go past, you should be thinking of your literary and musical heroes in the post war years.

Now, onto a more serious note. Do you know what is happening to The Chelsea regarding reopening or repurposing? I can't find any progress reports.

consistent purpose and community.. that is quite a radical and appealing thought. I wonder if the original architect Philip Hubert realised his socially aware, co-operative residential hotel would be so important for so long.

I don't know The Algonquin Hotel, but do you think it also shared a sense of community? If so, I will take back every nasty thought I ever had about mainstream, respectable society treating its literary and musical world very badly.

Bob Dylan did indeed live in the hotel for long periods at a time, instead of in his own home or in between stays in his own home. Perhaps he felt he could be more successful in his writing because the Chelsea atmosphere was more peaceful or more creative.

Bob Dylan discussed his 1965 stay there in an interview:
http://www.rams.demon.co.uk/bd1.htm

Hi Hels, do you have any idea if the Chelsea hotel is open for guests? I'm visiting NYC in April and I'd love to see it, I even tried reserving there, but I couldn't find it on http://new-york.hotelscheap.org/. But I guess that their rates aren't going to be cheap :(

I can't find any mention of the hotel opening yet, so I have found a consolation prize for you: 96 photos of the hotel. See http://www.yelp.com/biz/hotel-chelsea-new-york

I thought an article about a literary/artistic enclave in New York City might interest you, and that also fits in with your recent post on rowhouses. That's quite an impressive list of residents on St. Luke's Place. Carved-up mansions make up quite a different environment than planned-for-artists developments. I wonder which was better for courting the muse? My guess is that it is mainly the company and overall encouragement, but personally, I would prefer someone's left-over large drawing room to anything that could be described as "compact" or "functional."

Incidentally, I have read of St. Luke's Place in novels, used to confer an instant literary/moneyed cachet on a character.

what an amazing place... and one I did not know about. I suspect courting the muse may have been just one of the motives for living in St Luke's Place in the 1920s :)

June July and August are miserable, grey and cold months in Australia, but I definitely feel a new blog post coming on :) It might be very interesting to compare this cultural hive of activity to firstly the Algonquin Hotel and secondly the Chelsea Hotel.

The Australian (23rd Feb 2017) published an obituary for Stanley Bard, the 82 year old proprietor of the Chelsea Hotel. His father David had arrived from Hungary before WW2 and had bought the hotel with two other partners. Once Stanley took over, he spent 40 years creating a community that was more a bohemian enclave than hotel.

A number of doors from the iconic Chelsea Hotel in New York have been sold at auction. Doors from the rooms of Bob Dylan, Leonard Cohen, Jimi Hendrix, Janis Joplin, Joni Mitchell and more were purchased for thousands of dollars each. Bob Dylan’s door went for $100,000 (around £70,000) alone, while the door to a room occupied by Leonard Cohen and Janis Joplin during an affair that is rumoured to have inspired Cohen’s track Chelsea Hotel No. 2′ went for $85,000. Author Jack Kerouac wrote On the Road while staying at the hotel in the 1950s and his door sold at auction for $30,000. Jimi Hendrix and Madonna‘s doors went for $13,000 each.

The doors were reportedly rescued by Jim Georgiou, a former tenant, who saw them being thrown away and arranged to take possession of them.

that is amazing... thank you.

What do people do with the doors, once they collect them? Since Leonard Cohen and Janis Joplin were my two favourite performers in the entire universe, I would have bid for their door!