Leonard Cohen was born in 1934 in Quebec. This Canadian singer, musician and poet published his first books of poetry during the 1960s. His work in the early days, and since, dealt with Cohen’s unique analysis of loneliness, sex, struggling relationships and religion.

In 1969, when I met my then-boyfriend (now husband), his first present to me was a book of Leonard Cohen poetry. This was a wise gift from my young boyfriend; it made him appear to be insightful, sensitive and literary-minded.

I loved Cohen passionately in 1969 and I love him now, perhaps more nostalgically than in practice. But each time Cohen has come to Melbourne, we have re-mortgaged the house to afford the tickets. And each time I have remembered ALL the lyrics of his old songs. That is true of the thousands of people who filled Melbourne’s Rod Laver Stadium to the rafters tonight, mostly people over 55.

For the concert tonight, Cohen selected largely from his older repertoire. Of the religious themes, Hallelujah was beautiful as ever:

The songs sometimes deal with ambiguous topics and there is much debate over Cohen's intentions. I agree with MOKB blog. The religious themes and sexual lyrics imply that the tracks deal with the dynamic of a relationship by using spiritual metaphors, and the tone is often described as regretful. That may be the reason why throughout his career, Cohen's music has sold better in Canada, Britain and Europe than in the U.S. But to Australian fans, it didn’t matter remotely. 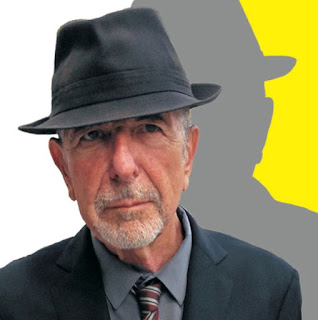 There was little blatant political commentary in the Melbourne concert, but one song DID bring the house down: Democracy is coming to the U.S.A.

As Blog On the Tracks noted in New Zealand, Cohen’s self-deprecating comments were scattered throughout the songs and the spoken poetry, although when he covered his mouth with his hand, his slight smile was missed by most of the audience. Let me add one more thought. Cohen’s love songs were written by a young man, but as he ages, the very same words can take on funnier or sadder implications. In Chelsea Hotel, for example:

you were talking so brave and so sweet,
giving me head on the unmade bed,
while the limousines wait in the street.
Those were the reasons and that was New York,
we were running for the money and the flesh.
And that was called love for the workers in song
probably still is for those of them left.

I remember you well in the Chelsea Hotel
you were famous, your heart was a legend.
You told me again you preferred handsome men
but for me you would make an exception.
And clenching your fist for the ones like us
who are oppressed by the figures of beauty,
you fixed yourself, you said, "Well never mind,
we are ugly but we have the music."

This may be Cohen’s last trip to Australia. Just as he was finishing the evening, he thanked his audience for remembering his old songs and for keeping them alive. It was our very great pleasure, Mr Cohen.

Readers may enjoy the book I'm Your Man: The Life of Leonard Cohen, written by Sylvie Simmons and published in 2013. And an article in The Algemeiner has very useful reading.

Yes Leonard Cohen is undoubtedly a poetic genius. We saw him last June at the Montreal Jazz Festival. In Montreal, it was not just over 55s who were there but the audience was predominantly female. Needless to say, it was a full house for 3 nights straight in his home town, especially since his concerts are rare.

One thing that caught my eye when you discuss your future husband's gift to you of a book of Cohen's poetry, you write: "This was a wise gift from my young boy friend; it made him appear to be
insightful, sensitive and literary-minded".

Surely you mean: "it showed him to be insightful, sensitive and literary-minded".

I know you are a Leonard Cohen fan. What did you think of his last concert?

I was at the one in Copenhagen. I didn't like it as much as in past years. The songs were too slow and although I knew all the words, the arrangements seemed less exciting.

Never mind. I have all his early works.

Perhaps Cohen’s best-known song is Hallelujah, first released on his studio album Various Positions in 1984. The song had limited initial success, but found greater popularity through a 1991 cover by John Cale. More than 5 million copies of Hallelujah were sold in CD format prior to 2008.

The song has been the subject of a BBC Radio documentary and a book — Alan Light’s "The Holy or the Broken: Leonard Cohen, Jeff Buckley & the Unlikely Ascent of Halleluja".

But before Hallelujah, there was Suzanne. In 1967, disappointed with his lack of financial success as a writer of novels and poems, Cohen moved to the US to pursue a career as a singer-songwriter. That year, Cohen’s Suzanne became a hit for singer Judy Collins and proceeded to be his most-covered song for many years.

thank you. I will add the book and magazine reference to the post.

leonard cohen passed away :(
cohen was sort of our bob dylan

even though I knew Leonard Cohen had been sick for a long time, and even though he was in his 80s, this was heartbreaking news. You Canadians must feel even worse. My adult children love Cohen's music, so perhaps it will live on for generations to come.

I have just written up the Leonard Cohen: A Crack in Everything exhibition that is opening at the Jewish Museum New York this week (April 2019).