The Klimt and Schiele film: 100 years since Austria's golden era

The film “Klimt and Schiele: Eros and Psyche, 1918-2018 - Scandals, Dreams, Obsessions in Vienna's Golden Age” analysed turn-of-the-century Vienna art. The film guided viewers through the Albertina, Belvedere, Leopold, Freud, Kunsthistorisches and Wien Museums and through exhibitions of Klimt and Schiele’s works. The film retraced this extraordinary era: a magical moment for art, music and literature, in which new ideas circul­ated. Life took place in salons where artists, politicians and scientists met each other. Talented women like Alma Mahler-Werfel, Lina Loos or Bertha Zuckerkandl began to emancipate themselves.

The Kunstschau/Art Show of 1908 was arranged by artists in the Gustav Klimt Group and coincided with celebrations held in Vienna for the 60th anniversary of Emperor Francis Joseph I’s reign. The artists were offered the use of vacant land, which had been designated for an eventual Konzerthaus, as an interim exhibition venue. In only a few months, Josef Hoffmann, Gustav Klimt, Otto Prutscher, Koloman Moser and others built and furnished temporary buildings holding 54 exhibition rooms, gardens, interior courtyards, café, a summer stage and a furnished two-storey country house. For young artists and students like Oskar Kokoschka and Egon Schiele, the Kunstschau was their first exposure to foreign art, and a brilliant exposure it was. 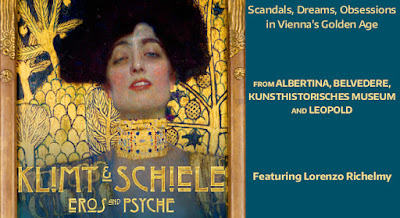 Gustav Klimt, Egon Schiele and Oskar Kokoschka used their good connections with Vienna’s New Money, to establish a new world for the arts. And they interacted with other Viennese intellectuals.

Note that 100 years later, we have re-examined their works, found somewhere between Jugendstil & Expressionism. As the thunder of WW1 cannons was dying out in 1918, the Austro-Hungarian Empire was beginning to disintegrate and Vienna’s Golden Age was waning. Since the turn of the century, Klimt and Schiele reflected the new feeling of art, paintings that port­rayed the era’s restlessness, fears and desires. Society was shocked! Presented in high definition, the film is a must-see for both art & film lovers. The images had extraordinary visual power, going from the charming enveloping decorations of Klimt’s works, to the anguished linework in Schiele's magnetic nudes and contorted figures. 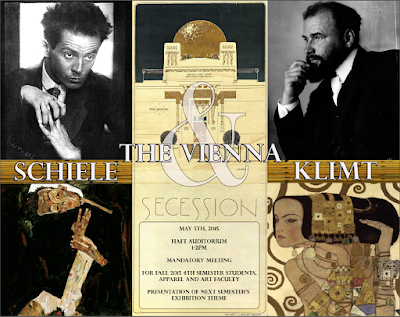 The motto that stands in golden letters on the Secession building, inaug­urating a new era, says: "At every age his art, art his freedom". Eros and Psyche was set in the very city where Hugo von Hofmannsthal, young Ludwig Wittgenstein, future directors Fritz Lang and Erich von Stroheim met on the streets and the opera Salome by Richard Strauss opened. Despite the artists being quite different, both turned their backs on academic conventions. The film showed images of great strength, with the enchanting and enveloping decorations of Klimt's paintings, up to the tormented lines of Egon Schiele with its painful eroticism.

Eroticism was the secret thread of this story. In the publication of Sigmund Freud's Interpretation of Dreams, the unconscious rose strongly on the surface. Psychoanalysis, with its disruptive theor­ies of infantile sexuality and repressed emotions, shook a normal society that opened its eyes to the profound nature of the ego.

Consider the Vienna of music, between the rhythm of the Strauss waltzes father and son that resounded in the squares and in the cafes. And remember the memory of the giants of the past, Mozart, Beethoven, Schubert and Brahms. From this tradition the young Arnold Schönberg started, planning to subvert his own art. Vienna was a city in which the master confectioners handed down the recipe of Sacher torte and jewellers took up the liberty designs.

On the same two days, Saturday 27th and Sun 28th Oct 2018, “Klimt and Schiele: Eros and Psyche, 1918-2018 - Scandals, Dreams, Obsessions in Vienna's Golden Age” will be showing at the Cinema Nova in Melbourne and many other art cinemas in Australia’s capital cities.

Read Klimt /Schiele @ the Royal Academy for a detailed analysis of the two artists' drawings from the Albertina Museum in Vienna, now showing in London.

It doesn't look as if Schiele had a very happy life. I must see the film.

A terrrible life !!! His father was died in 1905 of syphilis. His uncle became his guardian but was distant. In 1906 Schiele applied to Vienna’ Akademie der Bildenden Künste to study painting/drawing, but was frustrated by the school’s conservatism. Klimt generously mentored younger artists, and in 1908 Schiele had his first exhibition, in Klosterneuburg.

Schiele co-founded the short-lived Neukunstgruppe/New Art Group but it failed. Apparently many found the explicitness of his works disturbing. His self-portraits exaggerated his soulful eyes, lithe, skinny body, long, prehensile fingers, high forehead and erect hair. He grimaced and had the emaciated look of a melancholic man, starved by the industrial modernity.

In 1915 Schiele married Edith. He was conscripted into Austrian army but was able to pursue his art. Schiele had 50 works accepted for the Secessionist's 49th exhibition, in Vienna 1918, in the main hall! The show was a success; critical acclaim & financial success at last. But in 1918, the Spanish flu pandemic reached Vienna; Edith, who was 6 months pregnant, died in Oct and Schiele died 3 days later aged 28!

1918 was such a significant year in Vienna's art world, every gallery in the nation is putting on a special exhibition this year. The Orangery in the Lower Belvedere has Egon Schiele; the Austrian Museum of Applied Arts/Contemporary Art has Koloman Moser; Leopold Museum has Gustav Klimt; the Literature Museum has the leading Figures of Viennese Modernism, including Berg, Wittgenstein and Zuckerkandl etc etc. A very interesting few months, yes.

thank you so much for letting me know I am definitely going !!!

hope to see you there, if you also select the Sunday viewing :)

I wrote that since the turn of the century, Klimt and Schiele reflected the new feeling of art, paintings that port­rayed the era’s restlessness, fears and desires. Of course society was shocked .... artists had not dared to show modernist fears and desires in public before!

It's quite sobering to realise that this art is one hundred years (and more) in the past. One thinks of it as much more recent. I have always thought of Klimt and Schiele as a 'pair', both equally reflecting their times, location and environment.
I hope that exhibition comes to London!
CLICK HERE for Bazza’s novaturient Blog ‘To Discover Ice’

the two men were linked together because, without the endless support of The Vienna Secession in general and Klimt in particular, Schiele would never have made it into the famous circle of modern Viennese art. But Klimt's art was big, bold, colourful and full of passion. Schiele's art was dully coloured, harsh, pain-filled and naked genitalia rather than passion. No wonder Klimt made a lot of money.

Hello Hels, I find that I am half fascinated, half put off by Klimt-era art. Perhaps this is because of their focus on and experimentation with psychoanalysis and Freudianism. Perhaps it is time to focus on this in more detail so as to form some definite opinions. Either way, it is fascinating to get of glimpse of its practitioners and their lives and influences.
--Jim

It seems that any era of widespread and rapid change is going bring uncertainty. Traditionalists are always going to resist any change and the more fringy elements of society are going to be even keener to be included.

How much more so in the old Austro-Hungarian Empire which, having been so authoritative for centuries, began to fade at the turn of the century and fell over entirely at the end of WW1. One example will do. The Secessionists originally intended to use space in the Kunstlerhaus, but the traditionalist board of directors banned the new "radicals" from using any Kunstlerhaus space. And the city council wouldn't allow the Secessionists to build right on the highly desirable Ringstrasse.

But I still don't know how you feel about Viennese culture from the 1890s on.

Hi Hels - I will try and see the film at some stage ... and any exhibition that comes within my orbit ... I will endeavour to see. It's always fascinating to see these works and to understand the artists ... so thanks for this - cheers Hilary

The film Klimt and Schiele: Eros and Psyche, 1918-2018 was inspired by some of the many exhibitions that were organised for the occasion of the special centenary. Of course we will analyse the material with 2018 eyes; the tricky bit is to recognise that the 1918, post-WW1 understanding of the art world may have been very different.

I did look around thinking you might be there but alas couldn't pick you out . Wasn't it good . Thank you so much fro letting us know about this . I would have missed it otherwise.
Tony and I went to Vienna very recently and spent 10 day there but could have spent a lot longer . it was so interesting . We stayed at an old schloss quite close to Otto Wagner's home on the outskirts of the city and just up the road from where Klimt was born . I wish we had seen this film before we went . I saw quite a few Schiele pictures while there . The are very uncomfortable to look at . Gave me a feeling of intruding into someones else pain. Now I understand why . He was a amazing in his ability to express himself at such a young age I am not sure that I would have likes him much though .

Spending 10 days in Vienna was an absolute treat, even better because you stayed in a great location and saw art and architecture everywhere.

Yes, the film would have been a great help before the trip. These days, _before_ travelling somewhere new, I read every blog post I can find about the place. I love the blogging world :)

I love Blogs too and am very grateful for yours , always such an interesting read to tickle the neurons of an afternoon.

I am retiring at the end of this academic year, and am going to depend on blogging to keep my brain functioning at a reasonable level :)

Organised by the Royal Academy of Arts London and the Albertina Museum Vienna, Klimt-Schiele Drawings will a unique opportunity to see extraordinary drawings produced by both artists, considered to be some of the 20th century’s most important works on paper. Until 3rd Feb 2019.