In Vienna, it is often said that artists were used to a very traditionalist public life style based on Ringstrasse values: economic prosperity and artistic dependence on a classical past. These values had been core to ideal middle-class homes in mid-late C19th. But by the late 1890s, young Viennese artists resented the Ringstrasse mentality and felt that they could not create their own artistic visions.

In April 1897 Viennese architects Otto Wagner and his students Josef Hoffmann and Josef Olbrich joined with artist Gustav Klimt, designer Koloman Moser, Max Kurzweil and others in an arts and crafts renewal. Modelled on the Munich Secession of 1892 & the Berlin Secession of 1893, the Vienna Secession broke with the local Art Academy and declared their independence.

Gustav Klimt, Egon Schiele and Oskar Kokoschka used their good connections with Vienna’s New Money, to establish a new world for the arts. And they interacted with other Viennese intellectuals like Alma Schindler, Gustav Mahler, Walter Gropius & Stefan Zwieg. Berta Zuckerkandl was the the group's main patron. Her home was entirely kitted out by Josef Hoffmann and in turn she got other architectural commissions for the young men. Her salon was The Centre!

To pursue their goal, Secessionist artists planned to create their own exhibition space. A site along the Ringstrasse was originally chosen, but it was only after a space became available on Friedrichstrasse, just off Ringstrasse, that the Council gave permission for a temporary pavilion. This building announced the arrival of The Secession publicly AND enabled modern artists to exhibit their work.

So why does turn-of-the-century Vienna draw us back repeatedly? Guest exhibition curator at the NGV in Melbourne, Christian Witt-Döring, made three main suggestions. Firstly by 1890, Vienna’s population was so large that it became the fourth largest city in Europe after London, Paris and Berlin. Secondly as capital of the Austro-Hungarian Empire, Vienna was the bustling cultural capital of a diverse, multinational and multi-lingual population of 51 million people. Finally, and not to be dismissed lightly, Vienna had a long-standing café culture second to none. At a time when the English were still supping on milk tea and sponge cake, the Australians and Germans were drinking beer, the French were drinking wine and the Americans were eating something awful, the Viennese had a passion for splendid coffee houses and patisseries. 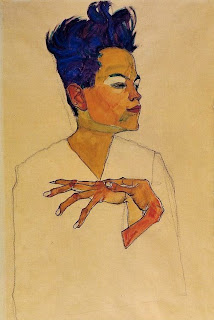 Egon Schiele, Self Portrait with Hands on Chest, 1910. Kunsthaus Zug, in Zug Switzerland.

The 240 works in the Melbourne exhibition represent the best Viennese artists of the early 20th Century. They have been brought together from The Belvedere Museum in Vienna and the Wien Museum, predominantly, and also from other collections. I was not familiar with the Kunsthaus Zug in Switzerland. But I was pleased to read their home page which says the museum has amongst the most extensive collections of Vienna's modern art outside Austria. Zug includes works by some thirty artists including Josef Hoffmann, Gustav Klimt, Oskar Kokoschka and Egon Schiele.

The Melbourne exhibition focuses on the main art forms of the 1890-1928 era: paintings, architecture and all the decorative arts (furniture, jewellery and textiles). This exhibition’s own curators say the objects explore and display modernism, individualism, the rise of the Secession movement and the creation of a new style concentrating on the use of colour, design and opulent glamour. If you didn’t know from the exhibition’s name, Gustav Klimt, Egon Schiele, Josef Hoffmann and Adolf Loos were central to an artistic revolution that modernised Vienna, creating a dynamic and trend-setting metropolis.

Although I personally don’t know much about modern music, friends are looking forward to musical connections to the art exhibition. “Jewish Music in Vienna at the Turn of the C20th” will be held in the NGV’s galleries (Sun 26/6/2011), presented by the Chief Cantor of Vienna’s Jewish community. “Mahler to Schönberg and the Expressionists” (Wed 27/7/2011) promises to develop an enriched understanding of the cultural environment that Mahler, Schönberg and other Viennese musicians experienced.

Thankfully this winter blockbuster will run for a decent length of time: 18/6/2011 - 9/10/2011. The scholarly catalogue called Vienna: Art and Design: Klimt, Schiele, Hoffmann and Loos was published by the National Gallery of Victoria in 2011, to coincide with the exhibition.

Hope you get to see it. I met a man who was obcessed with Klimt and there is something in that period that resonates with a lot of people in the 21st century. Bet it has big queues.

Hello Helen:
This exhibition sounds so very exciting and we are certain that you will be there on more than one occasion.

To know something of the background to any exhibition, in the way in which you have outlined here how this group of artists joined together, is always, in our view, to enhance the entire experience.

Vienna is of course metaphorically down the road from us and we are there quite often.

Hermes
I am not obsessed with Klimt but I can see why your friend could be. Easily.

I will mention just two successes. Klimt finished the Beethoven Frieze around three of the walls of the Secession Building in 1902. And Klimt began designing fabrics for his beloved Emilie Floge, who owned a successful fashion-house in Vienna. He held a large solo exhibition and showed "Portrait of Emilie Floge" 1902 in that much loved Klimt style: a woman in a simple space, wearing totally stunning, intricate clothes. *sigh*

But it is a big leap to Schiele.

Jane and Lance
absolutely. One cannot understand the bursting onto the art scene of something as radical as the Secessionist movement(s), without some careful analysis.

I will go to the exhibition with the students later in the winter semester, but I would like them to read Peter Vergo's book, Vienna 1900 before hand.

It was be easier to display and analyse Viennese paintings and furniture than it will be understand Viennese architecture. Which is a shame since Otto Wagner, Josef Hoffmann, Josef Olbrich and other architects were so important to Vienna's modern art scene.

the exhibition hasn't opened yet but the gallery's publication talks about placing special emphasis on two mature masterworks of Wagner's utilitarian style:
a] office of the newspaper Die Zeit and
b] Austrian Postal Savings Bank Building.

I look forward to seeing how they do it - models? photos? architectural drawings? swatches of materials?

But I agree with you that in the first instance, VIenna's modernity was at least equally pushed by architecture.

Hels, I'm looking forward to this exhibition also. I've renewed my NGV membership so I'll get a free ticket but I doubt one visit will be enough.

David
let us meet up for coffee, at the NGV coffee shop, after seeing the exhibition :) My email is:
helenw@bigpond.net.au

This really sound so exciting and hope to see more of it.

Job
couldn't agree with you more! The NGV puts on one winter blockbuster a year and this is it. Vienna's art and design between approximately 1890-1920 deserves our attention.

I was glad to read your reference to the Kunsthaus in Zug. It is less than 20 kilometers from my home, but I've never visited it - now you have stimulated my interest. But I'll wait until the Viennese paintings have returned form Melbourne.

What are the chances of finding paintings I admire, from a gallery I am totally not familiar with, right near a blogger I read regularly?

Hermes did the same thing exactly. Hermes mentioned a little known Victorian artist (Rebecca Solomon) about whom I wrote a chapter in a book of biographies years ago. What are the chances?

For a deeper analysis of the lovely Emilie Floge and her two sisters, see The Blue Lantern blog

See a joint exhibition of works by Austrian artists Gustav Klimt (1862-1918) and Egon Schiele (1890-1918) which opened at the Royal Academy to mark the centenary of their deaths. https://exploring-london.com/