David Goldblatt (1930-2018) was born in South Africa, the grandson of Lithuanian refugees who fled their homeland in 1893. Goldblatt worked in his father's men's wear shop and graduated from the Uni­versity of the Witwatersrand with a commerce degree. He lived in Johannesburg where he began photographing in 1948 and documenting devel­op­ments in Apartheid South Africa.

Goldblatt grew up during the rise of the National Party. When the Party came to power in 1948, the Nationals began implementing Apartheid policies that marginalised non-white South Africans.

In this difficult political environment, young Goldblatt dev­eloped an interest in photography-focused magazines like Life and wanted to become a magazine photographer. Then, when the African National Congress became active in their struggle against Apart­heid, the editor of Picture Post asked him to photograph ANC meetings. 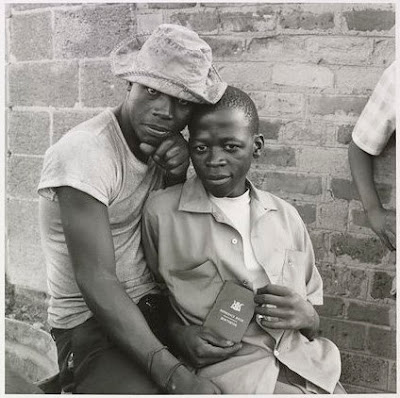 the identity document that every black South African had to carry, 1972. 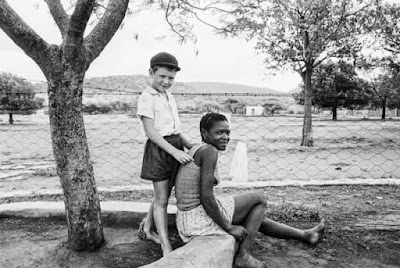 Goldblatt wanted to show how immoral the Apartheid regime was. But he did not automatically attend violent rallies or prot­ests; rather he ran away from violence. He was interested in the causes of events, so his photos captured the understated unease of living an ordinary life under an Apartheid regime. Clearly there was no explicit violence in Goldblatt’s photos, no bodies in Soweto streets or after Sharpeville. Just everyday life! But violence permeated life in South Africa and fear was a constant.

In the 1964 photograph, a white farmer’s son stood next to his black nursemaid, Heimweeberg, his hands resting gently on her shoulders. Behind them was a barbed wire fence.

Goldblatt said he was a photographer, capturing things that were important to him and to ­society. But he was not an artist; instead he saw himself as a documentarian. He asked how it was possible to be so apparently normal, moral and upright, as most citizens were, in such an appallingly abnormal and immoral situation. 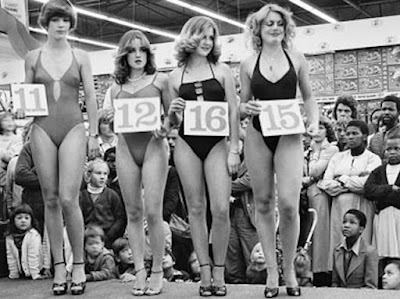 Saturday morning at the hypermarket, 1980

See the photograph Saturday Morning at the Hypermarket: Miss Lovely Legs Competition 1980 with white teenagers parading in bathers, and black and white shoppers looking on. Like many of his photos, it wasn’t dramatic and the subjects weren't named. But its very ordinariness showed the casual­ness of a society marked by Apartheid, a separateness that most children were aware of growing up in South Africa back then.

Another photo was taken just after 2 AM. It showed a never-ending queue of black South African commuters travelling on a bus that took them from the segreg­at­ed areas where they were forced to live, to work in Pretoria. Many carried blankets in the hopes of getting some much-needed rest while on the 3 hour journey. In this Blacks Only bus in 1983, not all enjoyed the luxury of seating as the bus travelled on its daily commute. Goldblatt had found the human, in the inhuman social landscape.

For much of his career, Goldblatt had worked with black-and-white photos; he believed that colour seemed too sweet a medium to express the anger, disgust and fear that Apartheid inspired. How ironic, since race was almost entirely decided by colour alone.

In the 1990s, he began experimenting with colour, but his mission to photograph South Africa through a lens of integrity and morality remained the same. He was looking critically at the processes taking place in his country. 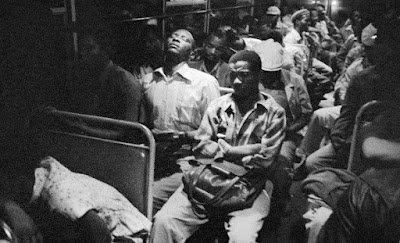 Exhausted workers on a Blacks Only Bus into Pretoria,
each morning at 3 am

These images will be among many in the exhibition David Goldblatt: Photographs 1948–2018 at Sydney’s Museum of Contemporary Art this southern summer (Oct 2018-Mar 2019). Planned and curated before the late South African photographer died this June, the programme includes his earliest work, his later port­raits of miners, Afrik­aners, exhausted early morning commut­ers, AIDS sufferers, blacks’ shacks and the lumbering mines that built the fortunes of the white ruling class on the backs of black labourers.

In 1987, David Goldblatt gave 115 of his prints to the V&A in Lond­on. The photographs had toured several British venues during the 1980s, organised by Newcastle’s Side Gallery. With majority rule not coming to South Africa until 1994 and the polit­ic­al situation worsening in the meantime, Goldblatt needed to sec­ure his work in a publicly accessible, safe place outside South Africa.

Originally Goldblatt promised the rest of his negatives to Cape Town Univ­ers­ity, but withdrew his collection after student protest­ors began burning campus artworks that they deemed to be colonial symbols. He believed that the actions of the students were the antithesis of democratic action. Before he died, Goldblatt instead bequeathed his archive of negatives to Yale University.

Goldblatt’s work has been exhibited in museums throughout the world. In 1989, he founded the Market Photography Workshop at home and in 1998 he was the first South African to exhibit at the Museum of Modern Art, New York. He exhibited in Kassel, Germany in 2002 and 2007, and held solo exhibitions at the Jewish Museum and the New Museum in New York, and in the Venice Biennale in 2011. Most recently he held exhibit­ions at the San Francisco Museum of Modern Art, Barbican Centre in London and Paris’ Centre Pompidou.

And now Sydney. As the opening of David Goldblatt's retrospective at the Museum of Contemporary Art Aust­ralia, the museum’s Chief Cur­ator Rachel Kent, and South African photographer, archivist and curator Paul Weinberg, spoke on the life and legacy of the late art­ist.

Even those of my close friends in Australia who haven’t been back to South Af­rica since 1990 will be stirred by the Sydney exhibit­ion. South Africa has great­ly changed, but its racist history was frozen in Goldblatt’s pict­ures. Thus his photos are a powerful reminder that while ordinary people went about their daily lives, horrors were committed and excused in their name. Perhaps the images are a warning to Pauline Hanson and Donald Trump.

I would like to see more of Goldblatt's work. I must look on the V and A website to see if any of his work permanently on display there.Thank-you for sharing.

Goldblatt's photos were definitely an art medium. All art should be insightful and even critical.

I hope you do get to the V & A, which has had a very nice collection of Goldblatt's work for the last 30 years.

I understand why the photographer wanted to get his negatives safely out of South Africa, but it is a shame that Cape Town Uni didn't inherit the bulk of the work. In many countries, later generations sometimes forget or rewrite their nation's history.

The meaning of art can range from the merely decorative (eg painting a flower on a porcelain plate) to the angst-filled. Goldblatt was being unduly modest I think; he understand how powerful his photographic art could be.

See a half page copy of the photo called ”Young men with dompas (identity document that every black South African had to carry), 1972. This very sensitive photo, in the Weekend Australian Magazine, is included in the MCA exhibition.

I will add this work to the post straight away.

Hello Hels, There are photographers who have similarly documented American segregation. That period, while still well within living memory, seems like a long time ago, but of course segregation and apartheid and their long-lasting effects are still very much with us, lending an extra importance to Goldblatt's work.

Yale was an interesting choice for depositing Goldblatt's work. A place like Yale will meet the storage and preservation needs of the Goldblatt archives, while allowing convenient access to worldwide scholars.
--Jim

Hi Hels - thanks for writing this up for us ... I hadn't realised some of his work is held at the V&A in London. Sadly I won't be going to Sydney for the exhibition ... but I do hope to get to the V&A sometime soon. Cheers Hilary

I am sure that every nation has to make decisions about which images of its historical past can be published and distributed, and which will remain securely hidden. For example, photos of massacred soldiers on both sides in 1914 were totally censored in Britain. And in the USA, I am sure that photos of black lads being lynched by white men were likewise censored.

But as the decades roll on, academics, historians and journalists will want more and more access to original sources. Thanks to places like Yale, that will be possible.

Thank goodness for the V & A... it is my go-to collection for so much of the history and art history that I lecture and blog about.

Hello again, I second your approval of the V&A. It's collection never ceases to amaze, the building itself is beautiful and fun to explore, and it seems that there is always some new surprise that you never suspected it would contain. --Jim

I had known of his work but hadn't really thought about it until now. It clearly shows why photography is not only an art but also more powerful than many words in this case. He was wise to donate to the V&A.
CLICK HERE for Bazza’s recondite Blog ‘To Discover Ice’

the reason the V & A is great is not just because it was started by the royals as far back as 1852. After all, there were/are plenty of collections of fine arts... but this is the world's largest museum of decorative arts and design, housing a permanent collection of over 2 million objects!! When I was at uni, Art History consisted of painting, architecture and sculpture. The decorative arts and design were more topics for TAFE (Technical and Further Education) colleges.

Photography was an art form from the very beginning, agreed. But Goldblatt's strength was using photography as a sensitive art form, not a blatant form of ideological statement.