The catastrophic pogrom in Kishinev (Russia 1903)

50,000 Jews lived in Kishinev (now Ukraine) in 1900, 46% of the total population. Kishinev was the 5th largest Jewish city in the Russian Empire city after Warsaw, Odessa, Lodz and Vilna. Thanks to the book, Pogrom: Kishinev and the Tilt of History (Steven Zipperstein, 2018) and to my grandfather.

Rumours of attacks surfaced before Easter each year in Kishinev. Acc­usations of ritual murder in Pavel Krushevan’s anti-Semitic newspaper, Bessarabets, remained ugly; there were rumours of menacing anti-Jewish meetings held in the back room of a Kishinev tavern, and leaflets calling for the beating of Jews were left in bars and cheap restaurants. By then Bessarabets had launched a semi-secret, anti-Semitic soc­iety.

Against this backdrop, Jewish anxieties were heightened. Jewish shop owners took home bank records, receipts and financial doc­u­ments for safekeeping. Employees were told that shops could stay shut after the Passover festival. 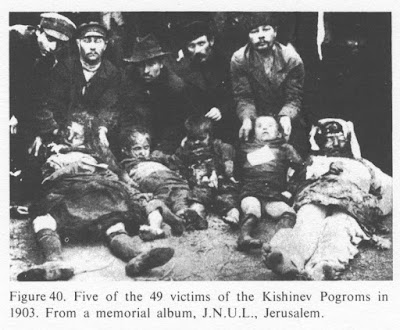 By late morning, well-dressed Christian families sauntered out of church and into the cluttered city square. In previous years Easter had celebrated with a merry-go-round, but officials seeking to dampen holiday revelry shut it down in 1903. Some Jews gravitated to the square, despite warnings that Jews should go directly home after Passover.

Then groups of young boys start­ed roughing Jews up. People jostled in a sparsely policed public square, lined with Jewish-owned shops. The taunting continued, but most assumed it was only a harmless prank. When adults started tossing rocks at Jewish shop windows, police intervened but they caught only a handful of thugs.

This was the pogrom that took place in Kishinev, then the capital of the Bessarabia Governorate, in mid April 1903. In the First Kishinev pogrom, 49 Jews were murdered, many Jewish women were raped, 1,500 homes were burned and 600 shops were destroyed.

Jewish-owned shops in the central square were ransacked. Liquor shops were targeted first. Tobacco shops were ransacked next. Then the rioters arrived at the New Market, one k from the city centre. They stole clothes off the racks of Jewish shops and walked through the city streets with the goods. Unwanted merchandise was piled onto roads. The rioters thought to be most fierce were Mold­ov­ans, hailing from the adjacent villages west of the Ukraine. Many arrived with wagons to carry away the contents of Jewish shops.

But as no more than 2-3 dozen people were respon­sible for the rioting, they were written off as rowdy drunks. However by 4 pm, the seminarians guided the mob to Jewish homes to destroy them. Cries of “Death to Jews!” and “Jews drink Christian blood” could be heard. Jews begged the police for help but were told that the mob was beyond police control.

Christians scrawled crosses on the windows of their homes to prot­ect themselves from attack, and doctors helping wounded Jews wore crosses on their clothes. Meat slabs found cooking in a Jewish shop owner’s home/shop were shown to rioters as the “remains of a Christian child”.

Public transport (trams) across town was infrequent so the rioters had to pillage mostly by foot. Yet two-thirds of Kishinev had been affected by violence; entire streets were largely levelled. Late on the first night, Jewish merchants gathered their neigh­bours tog­ether and distrib­uted iron bars and wooden clubs, to fight the next day if attacked by adults. Those with money fled to nearby hotels, or to board trains for Kiev, Odessa or Vienna. 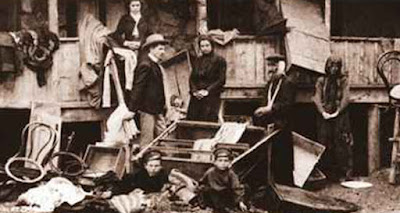 Homes destroyed and furniture thrown into the courtyard

The next morning 150 Jews converged on Governor General Raaben’s off­ices. A small delegation could meet him and were assured that order would immediately be restored. Alas the Governor General was believed.

Distant Lower Kishinev, built on hills above Byk River, was dotted with tiny shops, synagogues and houses built around courtyards crammed with very large Jewish families and Moldovan Christian families. Neighbours had previously been friendly, or at least neutral. So it was more typical than elsewhere in Kishinev for Christian families to take dangerous risks to save their Jewish neighbours.

Nonetheless on Day 2, violence in Lower Kishinev was concentrated in inter-connecting alleyways, pack­ed with flimsy structures that collapsed under attack. The mob engulfing Lower Kishinev included villagers from outside the city, driving wagons in to steal Jewish goods. In poor synagogues, holy Torah scrolls were desecrated. Jewish reports focused attention on Lower Kishinev’s poor; it was a catastrophe of the many poor, and not of the fewer rich.

Corpses were tossed onto the street, and lay there for hours until cleared by the army. Yet by the end of the second day, only 900 rioters had been arrested. Even two months later, rough boards covered the broken windows, shattered doors and damaged roofs of many houses, and dried blood was everywhere.

City newspaper and journal articles soon downplayed the role played by seminary students. And Krushevan’s anti-Semitic newspaper was relegated to a minor role. The story was reduced to a “few hours of intense violence that erupted just hours before the pogrom was ended”.

The Second Kishinev Pogrom took place in mid October 1905. This time the riots began as political protests against the Tsar, but turned into an anti-Semitic attack when another 19 Jews were killed and dozens injured. Jewish self-defence leagues, organised after the first pogrom, stopped some of the violence, but not totally. And 600 further pogroms swept the Russian Empire after the October Manifesto of 1905.

With all those murders and rapes, only two Christian men were sen­tenced to 5-7 years and 22 were sentenced for 1-2 years.  Hun­dreds of thousands of Russian Jews left for Palestine or The West.

Chaim Bialik was sent by Odessa’s Jewish Historical Commission to interview pogrom survivors and re­port. His famous poem was called "The City of Slaughter". In Ephraim Moses Lilien work “To the Martyrs of Kishinev”, the Jews’ martyrdom became a medieval-like tale, wrapped in a trad­itional prayer shawl. Israel Zangwill wrote the post-Kishinev play “The Melting Pot” in 1908. 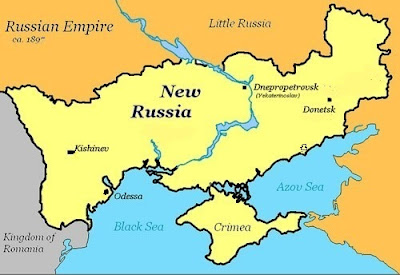 Map of Novorossiya/New Russia, 1900
My family lived near Odessa, Simferopol (Crimea) and Berdiansk (B marked on Azov Sea)

Hello Hels, I think that history classes (at least in the U.S.) gloss over the horrific nature of the pogroms--the actual violence that occurred and the later repercussions. It is important to understand this history, especially as a precursor to the WWII atrocities.

Today in the U.S. and other places, easily excitable groups (that can turn against many types of people) are forming and being encouraged by those who want to manipulate them for political power--this is too scary for words.
--Jim

Perhaps it was always thus. I am thinking for example of the late 18th century where groups of aboriginal men were shot dead and their wives raped by British soldiers in colonial Australia. It was almost a sport, enjoyed by drunken soldiers who had to live without their own families in the colonies.

But your point about why history students are not taught about massacres of minority groups is still a good one today. Either the authorities couldn't stop the drunken locals, and were so mortified that contemporary newspaper coverage was censored. Or the authorities couldn't have cared less about the vulnerable minorities, and weren't going to put themselves in harm's way protecting nasty Jews, aboriginals, Romani gypsies etc.

Did the Jewish citizens ever create self defence methods to save themselves?

Bialik was distresed that the Jewish men did not defend their families and neighbours. Zipperstein argued that they did the best they could. Especially in later massacres.

As the threats increased, as the online abuse grew increasingly vicious, as the defacing of synagogues and community centers with swastikas became more commonplace, the possibility of a violent attack loomed over America’s Jewish communities. On Saturday, a gunman stormed a Pittsburgh synagogue, killing at least 11 of its members and injuring many more, reportedly shouting “All Jews must die” during his rampage.

This was not a pogrom, but it was the worst single attack on American Jews in the history of the country. And it was one that many who have been monitoring anti-Semitic activity in the United States have been dreading.

What a tragedy... I felt exactly the same way about the Pittsburgh Synagogue as I felt about Kishinev :(

But not a pogrom *nod*. A pogrom was any organised destruction across a defenceless city, by a rabid mob. The destruction was of the community's homes, shops, synagogues and people.

its interesting that apparently a atheism is higher among those who have studied the humanities . The reason I guess is an understanding of history and the tendency of humans to continue to behave appallingly toward others especially when incited to do so by religion. Still my husbands family is here as a result of escaping Russian pogroms so it has an upside :)

Understanding of historical patterns sometimes makes perfect sense, and other times we think that communities must have behaved like stupid and unpredictable morons. E.g for Protestants in Germany after the Reformation, witchcraft trials were cruel but not senseless. Yet 100 years later, witchcraft trials in the USA were cruel AND senseless.

I would have liked to think that cruelty against women, children, Jews, blacks etc was not a systematic part of 20th century, modern civilisation; that it was random and individual. But that clearly was not true in 1903 and is even less true now.

A tragic series of events. It is to be hoped that history stops the same type of thing from happening again.

unbelievable, isn't it? But have a look at Syria or Afghanistan; mobs of men tear civilians' homes apart, raping the women, killing the men and forcing the children into exile. We humans have learned nothing :(