We know that during the C18th, only privileged young Europeans could fill their time between university education and career with an extended tour of Italy. Only the upper class had the time and the money to travel, and the classical education to interest them in Italy.

But by the early C19th the industrial revolution created a new market for travel: improved roads dramatically shortened journey times; industrial expansion generated greater wealth in the cities (not for everyone); and a limited working week brought with it the concept of leisure. Steam-driven vessels began to link Dover and Calais in 1821, and by 1840 an estimated 100,000 travellers were using them annually. In the same year the steamship Britannia crossed the Atlantic in 14 days. Steamers started to ply the Rhine in 1828, the Rhone and the Danube a few years later. And the spread of railway systems speeded up, democratised and extended the range of travel. 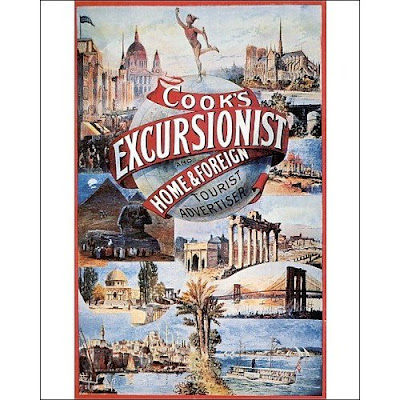 Thomas Cook (1808–92) was born in Melbourne Derbyshire. Brought up as a strict Baptist, Thomas joined the local Temperance Society at 17. Over the next few years he spent his spare-time preaching, campaigning against the demon alcohol and publishing Baptist and Temperance pamphlets. In 1833 Thomas married Marianne Mason and had a son.

In 1841 while walking to Leicester, Thomas decided to arrange a rail excursion from Leicester to a Temperance Society meeting on the newly extended Midland Railway. So he chartered a special train and charged his 570 customers 1 shilling, to cover the costs of transport and food. They travelled in open tub-type carriages, walked into the town centre, and enjoyed tea and games in the town's park.

Although his profit margins were small, the venture organising cheap train travel for working families was a great success and Cook decided to start his own business running rail excursions. Within 3 years of that historic 1841 temperance trip, Midland Counties Railway Company had a permanent arrangement with Cook who had to find sufficient passengers to fill the train.

In 1846 he took 500 people from Leicester on a tour of Scotland. They each paid a guinea to travel by train & steamer to Glasgow and Edinburgh, where they had vouchers for their hotels and were greeted with brass bands and cannons firing. Cook found many opportunities for people to uplift themselves culturally and morally via excursions to other places. Another of his greatest achievements was to arrange for 165,000+ people to attend the Great Exhibition in Hyde Park.

He soon went up-market and by 1865 was escorting to Italy “clergymen, physicians, bankers, civil engineers and merchants.” So up-market that in 1865 Cook moved his business to London. His son John managed the London office of the company that became known as Thomas Cook & Son. They organised personally conducted tours throughout Europe and procured hotels for tourists making independent trips.

Naturally Cook and his excursionists were attacked by traditionalists as “hurried observers, visible representatives of a modernity that was bringing intrusive crowds into formerly self-sufficient villages, towns and regions.” Times were changing. The new tourists, those “red-nosed people carrying red books [Murrays] in their hands”, were by virtue of travelling in a certain organised way, “incapable of the appropriate aesthetic response to the places they visited. They profaned the very sanctity of the monuments they visited”. Speed was seen as nasty. 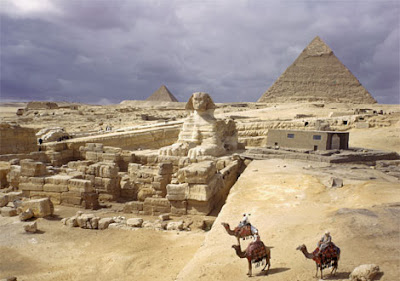 International success happened when they arranged tours to Egypt. The Suez canal, which opened in 1869, was the door to the Empire of the East, and became a turning-point for Cook tourism. Egypt became a favoured winter holiday destination for wealthy travellers. This was due to the improvements in transportation AND to the status of Egypt as a British protectorate. During the fashionable winter season, Cairo was the playground of all cosmopolitan Europeans, as well as the new middle class tourists who were eager to participate.

By 1880 the Egyptian Government was so pleased with the Cooks’ operation that they granted them exclusive control over all passenger steamers on the Nile. In return, the Cooks undertook in 1870 to invest large sums of money in rented steamers, owned by the Ottoman sultan’s viceroy, and to manage the service.

By the 1870s Cook's Tours offered hugely successful trips to all parts of the world, opening up the Grand Tour to the middle classes. By 1872 Thomas Cook & Son was able to offer a 212 day Round the World Tour for 200 guineas. The journey included a steamship across the Atlantic, stage coach across the USA to the westcoast, paddle steamer to Japan and an overland trip across China and India. Posters and advertisements depicted the more exciting places that the tour would visit eg Cook’s Excursionist and Home and Foreign Tourist Advertiser. Guide books were sold in their shops, chockablock with details about booking, transport, hotels, tourist sites, health care, diet, dress and financial arrangements. Most travel needs could be found as well. 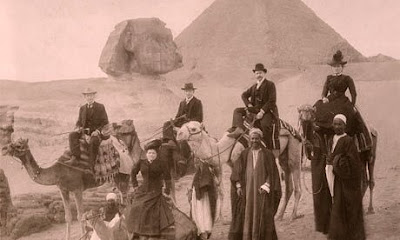 By the time Ottoman power was coming to an end, Turkey was seen as exotic and artistic. Certainly Istanbul was becoming an important destination in the 1860s and 70s, but it boomed once the Oriental Express went on its maiden voyage in 1883. The return trip was of course fearfully expensive, but it was so famous and luxurious that there was always a long waiting list for tickets.

Thomas Cook retired in 1879. While Thomas had maintained the grand view, John was innovative and  understood that no detail was too small in the travel industry. At a time when popular tourism had been frowned upon, Thomas had struggled to make it acceptable, while John (after 1865) strove to make it respectable. They had succeeded in making travel easier, cheaper and safer for millions of people via what we would now call The Package Tour.

There was no problem in changing the management over to John Mason Cook and HIS sons. John had an ability to organise on a large scale, so he set about transforming his father’s business into a global name. Thomas died in 1892, his legacy for travel around the world assured. 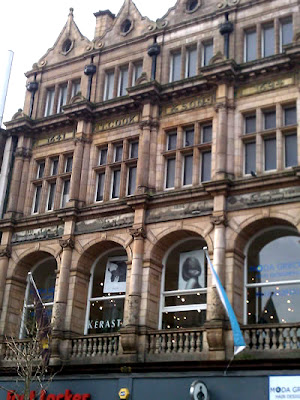 There are several memorials still standing. Melbourne Derbyshire has the Memorial Cottages which were built in 1890-1 by the Cooks. They include 14 cottages, bake house, laundry and Mission Hall, and still provide accommodation for some of Melbourne's senior citizens. Thomas' birthplace in Quick Close Melbourne was demolished in 1968. In Leicester, Cook’s other house still stands, as does his statute outside Leicester rail station.

Built as a memorial to The Man himself, the 3-storey Thomas Cook Building in Leicester (photo above) was designed by Joseph Goddard with carved archways that are separated by small stone balconies and columns. The four stone friezes depict four of Cook's significant trips between 1841-91. 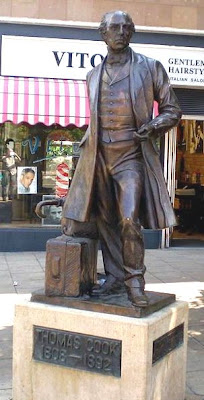 Who hasn't heard of Thomas Cook Travel but who knew anything about him? Nice work.

Yes, I agree with Andrew. The name is a byword even today, but my knowledge of the man was next to zero. Thanks for filling in the gaps.

And isn't there a lesson to be had? The smallest idea can start a revolution.

I knew a great deal about travel opportunities for monied families a la Grand Tour, but that was always going to be for just a very small section of the population.

What Thomas Cook showed was that ordinary middle class families could save up and go on an interesting holiday, often distant from home.

isn't that the truth! Thomas Cook did not come from a well connected family nor did he have any serious education; he was thrown into the labour market at 10!

Yet because of his religious convictions, hard work and great ideas, he found many opportunities for people to uplift themselves culturally and morally. The rest, as they say, is history!

He is lucky that his only child was just as committed to making a success of the business. Otherwise Thomas Cook and Son would have been a one-generation wonder. In other families, the son just wanted to race horses or get drunk or surf.

Why did Cook select slighty seedy Egypt and Turkey. I would have thought that elegant France, Italy and Switzerland would have been more congenial.

Great post Helen. He actually became a Baptist Minister and a small point he introduced travellers cheques which are so useful today. The company was nationalised in 1948 and nearly went under. I worked near their HO in Peterbough - not a good company to work for unfortunately so I was told.

Egypt was the perfect place. A few years after the Suez Canal was built in 1869, the British government bought the indebted Egyptian ruler's shares. Britain was on route to making Egypt red. Outright British occupation came in 1882 and later a formal protectorate was established.

oohh thank you. I wasn't going to mention any innovations after Thomas died, but of course they introduced circular notes or traveller's cheques way back in 1874!! I must be getting old.

Why would a travel company be nationalised?

Can't find a long explanation but part of the large programe of the time. They're not doing very well at the moment:

Hermes
thanks for the reference.

Nationalisation of trains, bridges, docks, shipping, canals etc I can understand and agree with. But I wonder why Thomas Cook was included. Other travel agents didn't seem to be.

If Thomas Cook was up in heaven watching the events of the post-war years, I bet he wasn't happy.

Really enjoyed this post Helen. I collect Thomas Cook guidebooks from the 19th century to World War Two. Two things strike me regarding these guides. Firstly, how chock-ablock full their suggested iteneraries were - very little time to sip a a coffee. Secondly, the assumption of the superiority of wetsern civilization - the rest of the world is simply an exotic panorame for our amusement.

The assumption of the superiority of wetsern civilisation must have been a very ambivalent experience for Cook's tourists. On one hand, they definitely wanted to visit the antique, the exotic, the precious relics of very foreign nations. One the other hand, the planned and paid for everything before they left home - familiar food, "suitable" hotels, membership in European-only sporting clubs.

Interestingly Thomas Cook Co was able to offer a 212 day Round the World Tour in 1872. The steamship crossed the Atlantic, stage coach crossd the USA to the westcoast, then paddle steamer to Japan and an overland trip across China and India. India yes, but I was surprised and delighted that clients queued up to see China.

What a stunning post! I had no idea that Thomas Cook was such an established company and that they had such a history.

Blogging helps enormously because the posts are usually under 1000 words and can be read in one sitting. Books cannot.

I am knee deep in Vienna, the Secession and the Workshops at the moment. If ever I think I know all that stuff, reading clarifies that I do not!!

I don't think the obvious has been mentioned. A Cook's tour, seeing many places or things in one go. eg We went on a Cook's tour of the city. Unfashionable phrase now, I suppose.

you are quite right! It has gone into the language.

A Cook's Tour is a guided but cursory tour of the major features of a site new to the viewer. The rushed nature, implied in the expression, sounds derogatory to me.

It reminds me of those upper class critics who had endless months themselves to tour. They hated it when the middle classes, by virtue of travelling in an organised Cookian way, “profaned the very sanctity of the monuments they visited”.

He sounds like quite a character! What better way to teach young people about him and to encourage travel than to arrange school tours by rail? It could be an adventure for lots of us.

That is so true.
Some of my most popular posts in this blog have been about train trips. It is a personal goal of mine to go on all the best trips..in 2012 it was Barcelona to Madrid to Lisbon. I loved every moment!