In earlier blogs, I was very impressed with the enormous contribution middle Europeans made to the art scene in Australia, starting in the 1930s and continuing throughout the 1940s and 50s. A few examples will do. Yosl Bergner left Vienna and Warsaw in the late 1930s; Wolfgang Sievers (1913-2007) left Germany in 1938; Ludwig Hirschfeld-Mack fled from Berlin to Britain in 1938 but was deported to Australia as an enemy alien in 1940; and Mark Strizic (b1928) left Germany via Croatia in 1950.

In pursuing the story of Karl Duldig, three coincidences occurred. Firstly one of my four grandparents and Slawa Duldig's father were both called Horowitz. Secondly on the very day I started at Mount Scopus College in 1960, I met Eva Duldig who became my teacher. Thirdly this week I heard a symposium paper* on Karl Duldig, as planned, and found the book The Duldig Studio: A History by Helen Kiddell, totally unplanned. 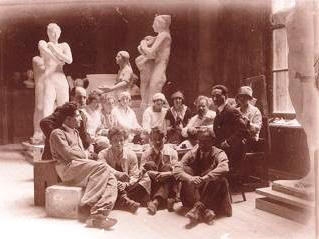 Karl Duldig (1902-1986) was born in the Polish part of the old Austrian Empire. In 1914 the family moved to Vienna, where he discovered his interest in sculpture, leading to study at the Kunstgewerbeschule (1921-25) under Anton Hanak. Duldig acknowledged Hanak’s teachings in Crouching Figure 1923, a work carved from soapstone with a knife, rather than the traditional hammer and chisels used for harder materials like marble. Duldig had followed Anton Hanak’s method of carving directly into the stone, without preliminary drawings or models. 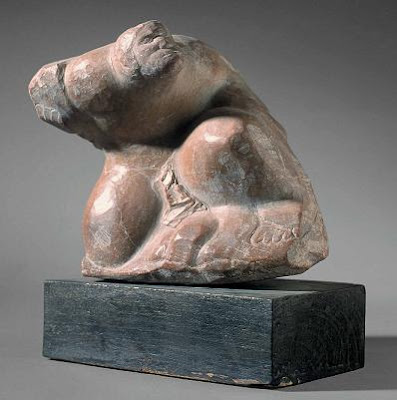 Later he continued studying at the Akademie der Bildenen Künste (1925-29). In 1931 in Vienna Duldig married fellow student Slawa Horowitz (1902-75), herself an artist. Sigmund Jaray, a distinguished Austrian firm of furniture designers and craftsmen, was commissioned by Slawa to design the furniture for the flat she and Karl had set up in Engzingergasse Vienna.

Their daughter Eva was born shortly before the 1938 anschluss when German troops entered Austria. At that very moment, Duldig was sending his sculptures to a Paris exhibition. Unbelievably Karl's artworks lay hidden throughout the war, in the cellar beneath the Laisnés’ apartment building (Slawa's sister and brother in law). Like others in 1938 and 1939, the very Jewish Duldigs had to hand their surviving assets over to Nazis and flee, as quickly as possible. Karl and Slawa moved to Switzerland, then Singapore in May 1939 and finally Australia. Slawa's sister Aurelie Laisné survived the Holocaust by living in Paris. 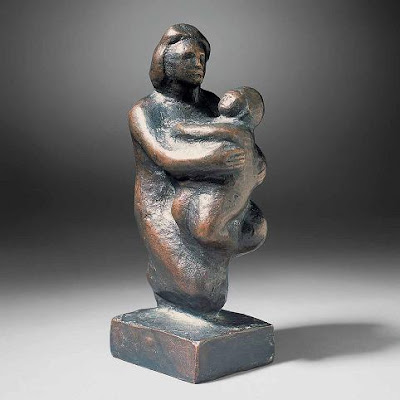 The move to Australia was not exactly voluntary. The family had escaped to Singapore to avoid the Nazis, establishing their own art studio and art school in the British colony. But in Sep 1940 the British deported them from Singapore as enemy aliens; they were interned at Tatura camp in rural Victoria. Mother and Child 1942 was carved from potatoes with a pocket knife while Karl Duldig was on kitchen duty in the 2nd AIF 8th Employment Company. He cast them into plaster and they were later cast in bronze at a foundry by The Duldig Studio.

Released in April 1942 to enlist in the Militia, the family eventually settled in their favoured urban environment and formally became Australian citizens after the war. Then two good things happened. Karl held his first one-man exhibition in Australia at Kozminsky's. And he was appointed art master (1945-67) at a prestigious grammar school in Melbourne, while simultaneously establishing a small ceramics business with Slawa. He exhibited regularly with the Victorian Sculptors’ Society and in the all-important Adelaide Festival of Arts (from 1960).

Commissioned glazed ceramic relief murals were a second string to his art bow. Karl made a special contribution to contemporary taste in Melbourne with modernist statements like the Progress of Man mural St Kilda Road 1960, and the Kadimah relief Elsternwick 1972. 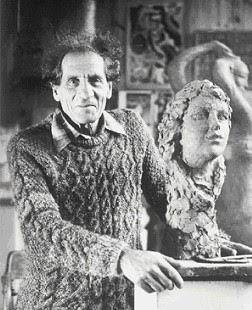 Karl Duldig in his Melbourne studio, now a museum

Among the generation of talented European-trained sculptors who found themselves living 12,000 ks from home and speaking little English, Duldig had to help define the place of sculptural practice in Australian culture. He was very supportive of younger artists and became foundation president (1962) of the Ben Uri Society for the Arts, later called the Bezalel Fellowship of Arts. He was president (1977) of the Association of Sculptors of Victoria.

His last and most poignant work was the Raoul Wallenberg monument (1985) at Kew Junction.

In 1977, some of Slawa’s sculptures were included in a retrospective exhibition of her work at the McClelland Gallery in Langwarrin. Her work also appeared in the major exhibition, Vienna and the Early 20th Century, held at the National Gallery of Victoria in 1990.

Before Karl died in 1986, he and his daughter had already discussed what would happen to the house and collection going into the future. In 1996, the The Duldig Studio opened to the public - the residence, sculpture garden and art studio. The house museum in Malvern East holds an extensive collection of sculptures in terracotta, marble and bronze, paintings, drawings and decorative arts presented in the artists` original home setting.

Their custom-designed Viennese furniture, as seen in the photo below, as well as the prototypes of the first foldable umbrella invented by Slawa in 1929, are in the house-museum. Duldig’s work is also represented in the National Gallery of Victoria, and since 1986, the National Gallery of Victoria has held an annual lecture on sculpture in his name. 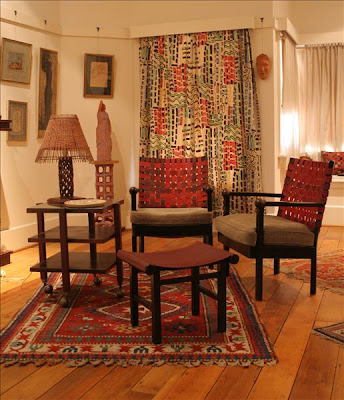 Sigmund Jaray Furniture, 1930 in the collection of The Duldig Studio

During 2003, a major programme called Karl Duldig Sculptures and Drawings celebrated the centenary of the artist’s birth. The exhibition featured 80 works from the museum’s permanent collection and travelled to the cities of Vienna, Krakow etc. The Viennese-Melbourne sculpture had “gone home”.

*Alison Inglis' paper was called Karl Duldig and Vienna. The Vienna Art and Design symposium was held at the National Gallery of Victoria in August 2011. Inglis showed that Karl's experience as an art student and his work in Vienna before 1939 were replete with Secessionist and Workshop values. Presumably the furniture in the Duldig home in Melbourne also provided a strong link to Viennese cultural history.

Roger Butler was the editor of the book, "The Europeans: Emigre Artists in Australia 1930-1960", published by The National Gallery of Australia Canberra in 1997. Recommended.

I read The Hitler Emigres by Daniel Snowman, but of course the Viennese artists who emigrated to Australia were hardly mentioned.

No comment as I've only heard his name in passing and learnt so much. Love the furniture.

this Viennese furniture from 1930 was amazingly modern, colourful and comfortable.

Vera J Behal’s book Möbel des Jugendstils, available at the Vienna Academy of Fine Arts bookstore, has information on Sigmund Jaray (1838-1908) and his Company. After Sigmund died, two of his sons Max and Karl ran the company. In true Secessionist style, when Jaray Company accepted a commission, they did the furniture, wall coverings, light fittings, rugs and EVERY other thing.

At the studio I saw an interesting exhibition called The Duldigs in Vienna, paying particular attention to pre-WW2 Vienna. It was accompanied by a well written brochure.

many thanks. Vienna at the turn of the century must have been culturally diverse and stylistically exciting. I will read the brochure right away.

Yesterday, April 3, had the pleasure of visiting and photographing the monument to Wallenberg and only this day (4th) found via Google who designed the monument and setting. This -- no one seems to have noted -- is the 100th year since the birth of Wallenberg and I will be writing an account of his life using photos from the Melbourne site, and must say something about Duldig as well. Thank you for this informative blog.

I tried to send a comment re Karl Duldig and his last monument via your blog. I however think it was erased via a technical matter.

What I wanted to convey was a visit to the Wallenberg monument yesterday to photo it for an article on his life and a 100 year celebration since birth...in the process learning about Karl Duldig, so he too will be included.

When published, if you are interested, I'll send you a link.

I would be very pleased to read the published article, thank you.

I have added a reference to Ken Bandman's book, A Palette of Artists in Melbourne, published by Bezalel Fellowship of Arts, Melbourne, 1989. It has a well researched chapter on Karl Duldig.

I have added a reference to the book "Karl Duldig Sculpture" 1966. For the full reading list, see
http://www.duldig.org.au/EK_Bibliography.htm

We're just trying to find some color in this black and white world.
Keep on making inspiring article :)
imarksweb.net
imarksweb.net