In the early C19th the great increase in French industrial exhib­it­ions finally provoked interest in an "international" exhibition. In 1849 the Minister of Agriculture and Commerce suggested the inclusion of foreign exhib­its in the Paris exhibition of that year, but he failed. Thus it may have been quite accidental that the Great Exhibition of London in 1851 was the first truly international fair. Prince Albert was large­ly responsible for London's success, as was Joseph Paxton's amazing arch­itectural wonder, Crystal Palace. It was Britain that first created the indust­rial revolution and it was Britain that first created the model for industrial exhibitions.

I was particularly keen to unearth a number of important goals that the first universal exhibition in Britain had set for itself. Firstly it was hoped that by inviting ordinary families to walk around the various sites, those families would be inspired by science, technol­ogy and the arts towards education and self-improvement. Secondly it was expected that international trade would be greatly expanded, with raw materials coming in from the colonies and finished products finding new markets outside Britain. Thirdly Thomas Cook and other travel entrepreneurs saw a great opportunity to in­crease intellectual tourism. Railway tickets and hotel accommod­at­ion were packaged up with entry tickets into Crystal Palace.

Introducing locals to the host-nation’s colonies was more important for some nations than for others. The French took over northern and central Vietnam in 1884-5 and together with Cambodia and Laos, the three Asian countries formed French Indochina in 1887. Influence was also expanded in North Africa, establishing a protectorate on Tunisia in 1881. Grad­ually French control was est­ablished over much of Northern, Western and Central Africa. These colonies were all given space and press coverage at the Paris World Exposition 1889. They proclaimed France's status as a powerful nation, to the entire world.

The architecture inside all the late 19th century/early 20th century world exhibitions was sensational. Sometimes the buildings were accident­al­ly destroyed by fire (eg Crystal Palace, London 1851 and The Garden Palace Sydney, 1879). Oftentimes, the pavilions were specifically built to last only for the duration of the exhibition and were pulled down as soon as the last visitor departed (eg General Art and Indust­rial Exposition of Stockholm 1897). Occasionally the expensive build­ings were retained for the host city to use, in perpetuity (eg Melbourne 1880-1). 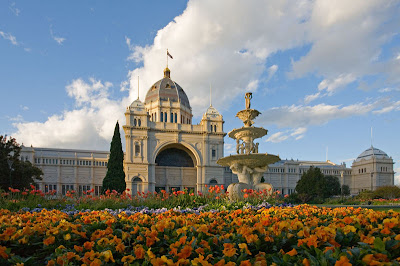 The Royal Exhibition Building, Melbourne in 2008

Host cities poured money into building and improving their permanent archit­ect­ural stock, to be ready for the cashed-up visitors. The Parisian Universal Exhibition of 1889 celebrated the triumph of ironwork with the Palais des Beaux-Arts et des Arts Libéraux, the Galerie des machines and the Eiffel Tower. At the next Paris Exibition of 1900, Paris inherited some of its many of its most memorable structures: the Grand Palais, Petit Palais and the Pont Alexandre III. Being a host city for a Universal Fair was largely advantageous.

The opening of the exhibition, usually by royalty, was the highlight of the year. Vienna’s World' Exhibition 1873 was inaugurated by Emperor Francis Josef of Austria, with imposing ceremonies, in the presence of a vast assemblage of people. The day was immortalised by the music of Handel and Strauss. And almost all the fairs were immensely pop­ul­ar. At Chicago 1893 27 million visitors arrived, a third of the count­ry's populat­ion at the time. The number for Paris World Expo 1900 reached 48 million. 50 million people attended Montreal’s Expo 67 at a time when Canada's population was only 20 million.

World Fairs were instrumental in the spread of tech­nology. Host countries were proud to display their own scientific and technological advances; pavilions were estab­lished for other coun­tries to show off their contributions. The scientific centrepiece of the 1900 Paris Expo was the Great Exposition Refractor, still the the largest refracting tele­scope built. Exhibits in San Fran­cisco’s Palace of Machinery 1915 showcased Diesel engines and water-driven power plants. Wise gov­ernments sent scholars to study the technol­ogical progress of other countries and to write reports back at home. The expos also prompted the establish­ment of new museums which promoted scientific, technical and industrial advances and supported technical education.

The arts received just as much publicity. Rene Lalique’s magnificent jewellery was displayed at the Universal Exhibition in Paris 1889 under the signature of Henri Vever, Lalique’s boss. But the jewel­l­ery brought so many commissions that Lalique was soon working under his own magical name. Objects Not Paintings found the lamp that was part of the seminal exhibition of Tiffany’s work at London’s Graton Galleries, organised by Siegfried Bing in 1899. This exhibition introduced serious collectors to Tiffany’s work which was so successfully exhibited at Paris' 1900 Exposition Universelle. Mies van der Rohe designed the German pavilion for the International Exposition of Barcelona 1929, and the furniture to go in the pavilion. His Barcelona Chairs immediately became recog­nis­able, all over the world.

I came across your blog while researching for an article on the Barcelona chair. I have bookmarked it :)

I was wondering if you can give us some feedback on our color-chooser tool that can help users choose the right color for their Barcelona chair.

You can check it at:
http://www.elegancecode.com/barcelona-chair-col...

I'd appreciate your feedback/comments.


Hels replied...
My pleasure Sarah, although I don't think I can help you. I included the image to show how World Fairs were instrumental in the spread of tech­nology and design. But in all the Universal Exhibitions that were ever held, the Barcelona chair played a role in only one.

My recommendation would be to examine the excellent Wilson reference. I hope that helps.

I see in your comments that you lecture on this subject. I've looked for information everywhere on what the exhibitions were all about, what they showcased, what it means for society at the time, and how significant the events are. I can somewhat make a guess on the importance, by proof of the Eiffel tower, Palace of Industry, etc. However I still am short on information in all my questions on the internet. I am aware that world fairs are still held, however their meaning in the dynamic society of today has been diminished. Mainly due to air travel and advancements in technology in bringing the world to our smart phones. If you could point me in the right direction on things I can read up on, like significant buildings or major events that happened in association with the world fairs/empire exhibition, I'd be very greatful!