I know a great deal about European art but I am not at all familiar with Chinese art objects. Nonetheless I was impressed with the report from Woolley and Wallis fine art auctioneers, Salisbury. A Chinese Imperial white jade carving of a recumbent deer sold in Nov 2010 for £3.8 million (USA $6 million or AUS $5.4 million). Created in the 1735-1796 reign of Emperor Qianlong, the deer was part of four Imperial Chinese jade carvings from Crichel House in Dorset. These carvings had been exhibited in a London gallery as part of Asian Art London during the week before the sale.

Woolley & Wallis in Salisbury also auctioned an imperial ghanta/ritual bell that sold for £2.4 million. The Buddhist ghanta, exquisitely crafted in white jade, represented the female aspect of wisdom and ranked among the most important symbols in Tibetan Buddhism. Furthermore jade was believed to ward off evil spirits. So items like this were very welcome as a wedding present, but I wonder how many proud parents could afford such gifts. 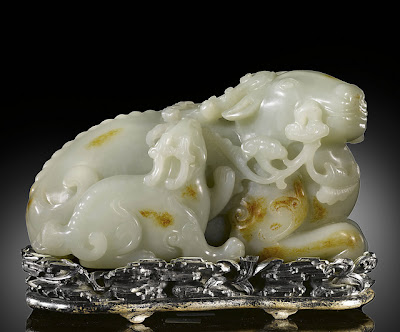 From the Kingdom of Khotan, on the southern leg of the Silk Road, yearly tribute payments consisting of the most precious white jade were made to the Chinese Imperial court, and from there it was worked into art objects by skilled artisans. Clearly jade was more valuable than the precious metals that the West was passionate about (gold and silver), explaining why jade came to be thought of the imperial gem. If that was the case in the 18th century, it is not surprising that jade would have been used the imperial family for the finest objects and cult figures.

And what an imperial family it was. Emperor Qianlong was the sixth ruler of the Qing dynasty and enjoyed the longest reign period in all of Chinese history - 61 years. Even in 1796, at the grand old age of 85, he had to be pushed into abdicating the throne on behalf of his son. Historians seem a bit rude about Emperor Qianlong, but there is general agreement that he was truly an important patron of the arts. More than any other Manchu emperor, Qianlong seemed to spend a great deal of money and time on expanding the imperial collection.

Why was a mythical deer chosen and what, if anything, was the symbolic value of this beautiful creature? The closest I could find is that a mythical horned Chinese deer-like creature is said to arrive only when a sage has appeared. Thus it is a good omen associated with serenity, prosperity and long life. 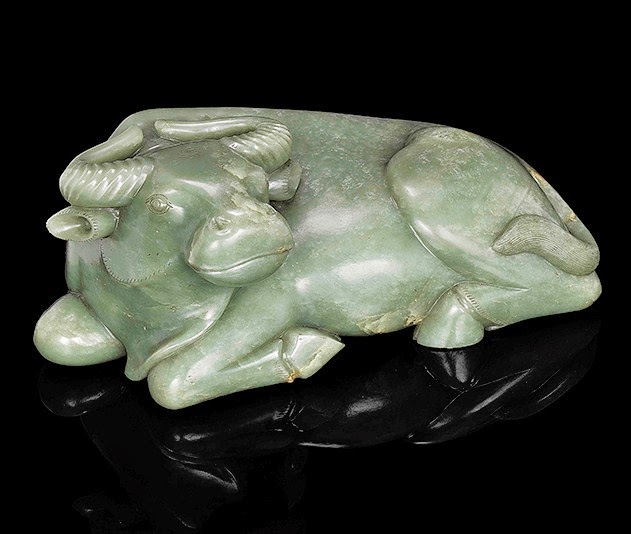 The auctioneers at Woolley and Wallis explained that prices had risen tenfold over the last four years because of the recent increase in Chinese buying power. So the would-be collector today is advised to examine the jade very carefully for its density and translucency, for its tactile and visual aspects. Quality is clearly more important than colour or size. A world's record for white jade was set in 2010 when an imperial white jade seal from the Qianlong period which sold for USA $15.6 million – it must have been very high quality jade indeed.

A seal commissioned and used by Emperor Qianlong sold for £2.7 million at Bonhams Sale of Fine Chinese Art in Nov 2010.  Seals were used to print stamps that were used in lieu of signatures. Often in jade, ivory or precious hardwood, each seal was used on personal or public documents and contracts that required formal acknowledgment. This particular seal, with its inscription Self-Strengthening Never Ceases, has been linked to the Emperor's 80th birthday celebration, so it was extremely imperial. Of even more interest to historians was the fact that the seal had been based at the Yan chunge Pavilion in the Forbidden City during its use by the Qianlong Emperor. 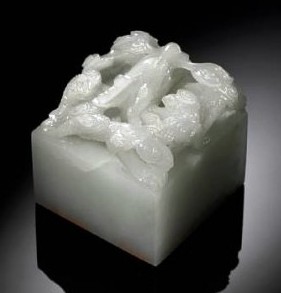 Country Life magazine (8th June 2011) noted that during this May, at least nine English salerooms held sales of Far Eastern works of art, often achieving prices well above the estimates. How long, they ask, before the deep well of British Far Eastern material runs dry?

In the meantime, Country Life was very impressed with a yellow jade ruyi/septre acquired by a British officer in Beijing in 1900, during the Boxer Rebellion. Made in the palace workshops during the Qianlong era, it was sold by Bonhams for £1.3 million inclusive. Carved from a semi-opaque pale greenish stone with a few pale brown inclusions, the upper side of the shaft had two crisp shallow relief cartouches of archaistic C-scrolls. The surface was lustrous, a double red silk thread tassel suspended from the end of the shaft. 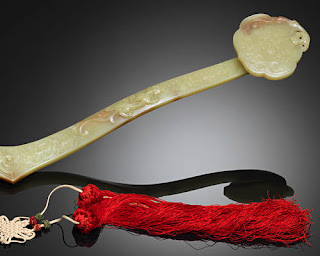 Despite the belief that quality was more important than colour, I wondered if white jade was more treasured than green or yellow jade. Bonhams noted that the popularity of yellow jade was well documented as early as the Ming Dynasty. The number of Imperial vessels and decorative items worked from this sought-after colour in the court collections suggested its popularity within the Qing court, particularly under the Qianlong Emperor.

Readers might like to pursue the topic of imperial jade art objects in a book written by Cathy Scott-Clark and Adrian Levy in 2002. The Stone of Heaven: Unearthing the Secret History of Imperial Green Jade’s story began in 1735, when jade-obsessed Chinese emperor Qianlong tried to extend China's reach into present-day Burma, reputed to contain the world's finest jade. Or read Christopher Proudlove's article, "Chinese jade: the collectors' market", in The World of Antiques & Art, Issue 80, Feb-Aug 2011. 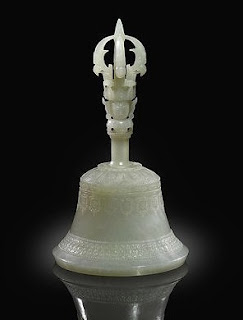 A Chinese jade marriage bowl from the collection of the late Com­man­d­er Paul Bridgeman of Dowdeswell Manor near Cheltenham was sold in March 2013 by Chorley’s. What intrigued me most about the marriage bowl was its shape. The ring handles, which were suspended from phoenix masks, were typical of the form popular at the Imperial Qing court (1644-1912). The phoenix birds were emblematic of new beginnings which is why it would have been given as a gift from the bride's family to her new husband. Plus the jade was of that pale celadon colour prized by the craft­smen who served that court, as we have seen.

And popular again. The marriage bowl has returned to China. 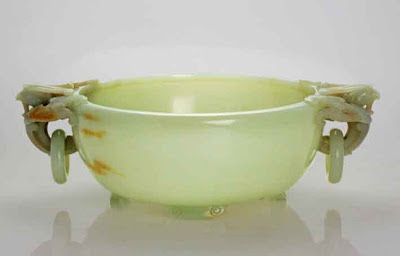 The rise in prices for Chinese art is rather frightening, and seems to be a bubble. I have been watching it closely over the last 5 years, in one of my particular areas of interest, and I have to be very lucky to acquire what I want at what I consider to be a fair price. (I hasten to add, I am not parting with the millions you have documented.)

bubble is such a powerful concept. Remember when the tulip bubble burst in 17th century Netherlands? People had mortgaged their homes and the last man standing had nothing to show for it except... some tulip bulbs.

I have seen only a few of Emperor Qianlong's jade pieces. They look delicately carved, translucent and historically fascinating, but are they worth USA$6 million each?

The deer is a Chinese symbol for prosperity used in many designs because the word deer lu4has the same tone and pronunciation. The marks on the skin of a deer have become a typical symbol of lu and are used to decorate studies and stationery.

I have some jade. A lot of poor quality or fake stuff about. Traditionally it was sold under silk clots by feel alone.

Like you, Hels, I am not overly familiar with Eastern art, although there appear to be some gorgeous pieces about. Our own National Gallery of Victoria and the various other galleries around the country have some significant pieces.

Jade doesn't do anything for me personally, but neither do any other 'precious' stones. Skilful carving can be seen in even the basest stone while fine marble can impress as much as the most translucent jade.

There are cultural, social and nowadays economic reasons why Chinese art seems to have increased so much in price. The current economic prosperity in China and the rise of an affluent class of the new business magnates has created a demand for objets d'art previously reserved for the imperial family. Money is no object and as the status of possession of such objects increases, so does competition in the auction rooms.

I had been a bit worried because the deer had been referred to in the auction house documents as a mythical creature. This threw me because dragons might be mythical, but deers are not.

nod... I am passionate about silver, particularly Huguenot silver. But the market and I parted company when the prices rose out of a normal human being's reach 20 years ago.

I agree that China's current economic prosperity and the rise of an affluent business class have created a demand for precious imperial art. But fashions come and fashions go. And scarcity, at usurious prices, creates fakes.

Alas Country Life magazine comes to me by sea, so June 8th's edition didn't arrive till today, 18th of August.

I added, a bit late, another amazing jade Qianlong piece to the post.

Hels thanks for the note. I can see the bell, but I cannot see which collection it came from.

I have added the jade marriage bowl, mainly because of the auspicious phoenix masks. They represented renewal, different from the prosperity symbolism attached to the deer.

A magnificent and important large green jade carving of a water buffalo 17/18th century believed to be of Imperial origin was auctioned at Bonhams Hong Kong. It is estimated at up to £1.2m

The handsome buffalo carved from an exceptionally large stone of rich celadon tone, lies placidly on its stomach with four legs bent underneath and its head turned to the left to gaze straight ahead with docile eyes. Experts believe the buffalo was taken at the sack of the Summer Palace during the Boxer Rebellion in 1898 - 1900.

I have added the image into the blog post, but I cannot find the measurements of the buffalo.