The Titanic and Liverpool

I wrote “In the hundred years before WW2 started, tens of millions of people left Europe in search of a better life in the New World. It was as though everyone was on the move, and no city did better out of this movement than Liverpool.” I was referring to The Empress of Ireland, but the point would have been made just as well about the Titanic. 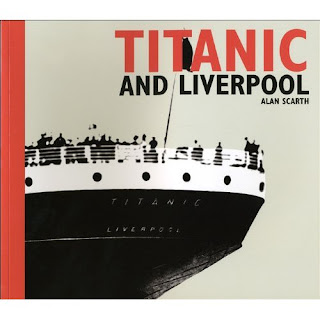 Pool of Life read the first book dealing with the relationship between Titanic and her home port of Liverpool: Titanic and Liverpool. (Liverpool University Press and National Museums Liverpool, 2009).  Written by Dr Alan Scarth of Merseyside Maritime Museum, the book comes back to my theme of transatlantic migration from Liverpool to North America. The gorgeous White Star Line ship might have been built elsewhere, but she was the pride of Liverpool.

Scarth used contemporary material from the White Star line archives and from the holdings of the Merseyside Maritime Museum. He asked what did the sinking of the Titanic mean for Liverpool, arguably Europe's most important shipping centre. Since many of her key officers and crew were either from Liverpool or had strong links with the port, and since the ship's owners were based in the city, the city must have been totally devastated. Juliet Gardiner added that with the city’s long seafaring tradition, it was inevitable that many of the crew who went actually went down with the ship were working class Liverpudlians.

Historians have long noted that while the wealthy brought retinues of maids and manservants onto the Titanic, but most members of the crew earned only tiny salaries. Thus it would have taken years for a Liverpool labourer working on the Titanic to save the money equivalent to a single, 1st class ticket. The ship's crew was of course made up of the most lowly manual labourers, toiling away in the heat and grime of the engine rooms. How many Liverpool families were left fatherless when the labourers drowned as their ship went down? 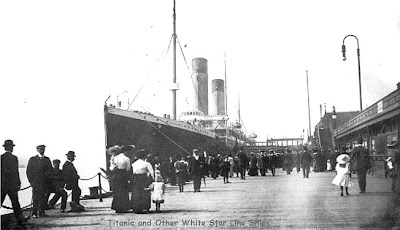 A very interesting show is now on at the Melbourne Museum, opened almost 100 years after the catastrophe, and called Titanic: The Artefact Exhibition. It is an incomparable insight into the grandeur, romance and the tragedy of the Titanic and her passengers and crew. By displaying extraordinary objects removed from the sea bed, visitors will be able to get closer than ever before to the passengers and crew. Note the exacting re-creations of the ship’s interior, delicate bottles of perfume, china bearing the logo of the elite White Star Line, even a piece of the ship’s hull. 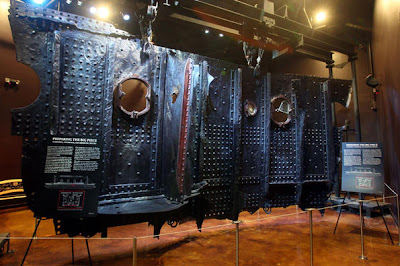 As they enter the exhibition, each visitor receives a replica boarding pass of a real passenger on the original ship. See a journey through the life of Titanic, from construction - to life on board -  to its ill-fated voyage - tragic sinking and rescue mission. In the Memorial Gallery, guests can take their boarding pass to the memorial wall and discover whether their passenger and travelling companions survived or perished. The same exhibition has already been hugely successful in cities like Paris, London and Chicago.

Confessions of a Ci-Devant is a blog with the most detailed description of life in The Titanic for 1st Class passengers that I have seen. In a second post on the subject, Confessions discusses a memorial I was totally unaware of: to the Belfast engineers who gave their lives trying to keep the light and heat going for as long as it took the Titanic to sink. This memorial sits outside Belfast City Hall. I warmly recommend you have a look at Confessions.

How interesting. I live not far from the main Titanic auction house in this country:

and have often been fascinated by what is offered.

Hermes,
is it a small world or what?

Thanks for the link to the auction house which had a special Titanic auction in April apparently. I would not have wanted a promotional brochure for the 1953 movie starring Clifton Webb and Barbara Stanwyck, nor a Hollywood version of DeCaprio.

But imagine being able to bid for "The Intimate Letters of Archie Butt". Or the Covent Garden matinee opera programme for the Relief Fund May 14th 1912.

Helen, how fascinating. Great background, and the Titanic is such a story. I am sure there is still much I don't know about the great ship and it's passengers.

The idea of the boarding pass and then checking the wall at the end of the tour is excellent - it must really personalize the experience.

Reminds me of a high school history class I heard of in which the students learned about one of the world wars by researching an individual soldier, sailor, or airforce personnel.

Hels, the kilns taht I featured today at Holroyd are no longer operational. They were kept for decoration and historical significance.
Sydney - City and Suburbs

Hi Hels, my wife and I visited the Titanic exhibition in Chicago when we holidayed there in 2002 and I can wholeheartedly recommend it.

They use a similar idea to the boarding card in Jersey, Channel Islands at the German WWII Undergroiund Hospital.

As you enter the tunnels you are given a (German) occupation ID card for a real person in 1940. When you finish the tour in the cafe you can check what happened to the person.

Some lived through the war uneventfully, some were collaborators, a few escaped and some were even executed by the Germans.

ChrisJ and Glen, agreed - personalising the experience really does seem to be important for young people. Otherwise they might experience the museum tour as if they were being shown over a Hollywood film set.

Glen, funny you should raise the German underground hospital tour. Since three of your important island territories (Jersey, Guernsey, Isle of Man) are crown dependencies, I have been very interested in the implications of not being part of the United Kingdom. It hasn't been easy locating WW2 material that was classified for 50 years.

I was born and raised in Cork city, Ireland. The Titanic's last port of call was Cork Harbour. The Titanic docked off the island of cobh, then known as Queenstown, and took on over 100 passangers. Then embarked on its final leg. A few years later the Lusitania was sunk off the coast of Cork and the dead and survivors were landed in Cobh. some of the dead were buried in Cobh. There is now a Heritage Centre at the point where passengers boarded ships to America, including the first ever ship to dock at Ellis Island in New York. Over a million Irish emigrated from this point during and after the Irish famine, destined for North America and Australia. I visited it last summer, including the permanent Titantic Exhibition. Here is the link: http://www.cobhheritage.com/index2.html

A Cork lad :) Thanks for your note - you raised a couple of important issues.

I think the thing about famous shipping accidents is that we focus on the Famous and the Mega Wealthy, and ignore the thousands of ordinary families seeking an easier life in the New World. I know I do. I have written extensively about the Astors, Wideners and Guggenheims, for example. But never about lowly 3rd class passengers barely able to scrape together the ocsts of a cramped family cabin.

The joy of the Heritage Centre is that it focuses on ordinary migrants, millions and millions of them, about to leave Europe via Ireland.

I hope I also redressed the imbalance a little in this post. We really should examine the unthinkable loss to working class families associated with the Titanic. Ditto Empress of Ireland and the Lusitania. of course.

How fascinating and I love that photograph of the relic. It must have been incredible to see up close. I visited the Merseyside Maritime Museum in December 2008 and it was absolutely fascinating. I was really touched by the exhibitions on the old and sunken ships and was equally interested in the slavery exhibit but it was too much to take in on one day. I will go back one day to see the slavery exhibit.

PH Chan
That is a very good question.

I have no doubt that the postcard was indeed of the Titanic... you can compare the ship in this picture to any other images of the Titanic easily enough. But how do we know at which docks the photographer captured this picture?

I have my doubts that the ship on the postcard is of the Titanic. The Titanic had 4 funnels; I can only see two on this ship.

Strangely the postcard does not say where the photograph was taken, most cards do. Being from Liverpool, I collect Liverpool postcards and that does look like the dock at Liverpool's Pier Head.

I was wondering why you put Liverpool docks, then Titanic when labeling the card.

PH Chan,
thank you - you may well be correct. The only evidence I have for the Liverpool label is second hand. See Titanic and Other White Line Ships in http://www.titanic-whitestarships.com/Oceanic_2_1899.htm
I have put a query next to the label, in the original post.

For an excellent review of shipwrecks in art, go to Weimar's blog: http://weimarart.blogspot.com/2011/02/shipwrecked.html

The ship in the photograph is the RMS Oceanic (1899). She was the pinnacle of 19th century shipbuilding and a very successful and much loved White Star Liner. The superstructure and lines of the ship are like a prototype Titanic, but she was only a third of the size - by 1907 when the Olympic class was conceived, the scale of this design had been increased massively.

White Star used Liverpool until 1907 when they transferred their transatlantic operations to Southampton. The Titanic never visited Liverpool, although her sister Olympic did just prior to her maiden voyage in 1911.

The Oceanic was torpedoed and sank in the First World War - one of her huge propellor blades is displayed at the entrance to the Ulster Folk and Transport museum in Belfast.

That is a terrific letter Anon, especially if people are interested in the Titanic and want to read further on the topic.

You know I lived in Britain for 2 years, and visited 14 times since, and never went to Belfast *blush*. Next visit I will definitely have a look at the Ulster Folk and Transport museum in Belfast.

The History Blog has interesting details about never-before-seen images of the Titanic, released at trial in Norfolk Virginia in June 2010.

I wish I was closer to the Merseyside Maritime Museum myself. It takes me a year ahead, to plan an itinerary and to pay for the plane tickets.

Apart from Titanic, it would have been wonderful to see the exhibition “On Their Own - Britain’s Child Migrants”. I got lucky this time however. The exhbition came to Australia, and was actually expanded.

The History Blog has published a post on Titanic Belfast, the innovative museum which opened in 2012 on the site of the former Harland and Wolff shipyard where Titanic was built.

The massive longitudinal sectioned plan of Titanic that was used during the British Board of Trade’s inquiry into the tragedy is now on permanent display.