The exhibition Rupert Bunny: Artist in Paris will continue at The Ian Potter Centre: NGV in Melbourne until 9pm, Saturday 19th June 2010.

Rupert Bunny (1864-1947) was born in Melbourne. After being very interested in music and architecture, in the early 1880s he settled on art at the National Gallery of Victoria School and stayed there from 1881-4. Eugene von Guerard and George Folingsby were some of his first teachers; John Longstaff was one of his friends and colleagues.

He travelled to Europe in 1884, still in his late teens, and studied at the St John's Wood Art School, London. He had only a short stay in England before settling in France and spending almost all the rest of his working career there. During the late 1880s and throughout the 1890s, Bunny was known primarily for his mythological works in oils.

To enjoy the very romantic, very languid painting called Sweet Idleness c1897, see The Monday Issue blog and Felicity Gleeson's blog. But sometimes the languid is too much. Malcolm Clark saw the women in Bunny’s paintings as sensual, yet devoid of sexiness.

Only with the turn of the new century did the ex-pat Australian artist decide to modernise himself. In 1902 Bunny married the French artist model Jeanne Morel, several years after first painting her. Later she appeared in a number of portraits. Genre scenes of Jeanne and other charming young women in flowing white tea gowns played a predominant role in his newest work. 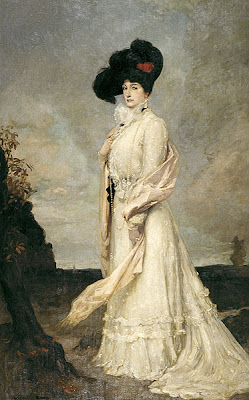 Bunny’s portraits were splendid and romantic. Dame Nellie Melba c1902 hangs on temporary loan from the National Gallery of Victoria in the State Dining Room at Government House. It must have been an important commission for the young artist. But the genre was to be expected. During the early 1900s, the Australians in Europe painted images of women and children, especially Bunny, Phillips Fox and George Lambert. It was a subject that was also popular with other artists at the turn of the century, with the Salon and Royal Academy painters, as well as less established artists.

He joined the New Salon d'Automne which was organised in 1903 by Georges Rouault, André Derain and Henri Matisse to be more radical than the Old Paris Salon. It must have been a delightful shock for Bunny to be exposed to Matisse’s and the Fauvists’ very different use of colour for the first time.

Contemporary critics admired Bunny's handling of light and texture; what they referred to as his simple charm. None of his paintings showed this more clearly than the enormous canvas called A Summer Morning c1908. The elegant and graceful women in their long white dresses and picture hats could have been anywhere; there was nothing particularly Australian about them. If anything, he tapped into Monet’s and Whistler’s subject matter. Life, as he showed it, was comfortable, leisurely and supported by paid staff.

A Garden Bench c1915 was another sensitive, sunny image of women at leisure. But unlike A Summer Morning, the background of Garden Bench consisted of mere colour splashes, filling the canvas with hints of spring bushes. Again the long dresses and straw hats suggested elegance, however in the second painting, his work was more spontaneous, more impressionistic. Girl At a Window by contrast was cool, laid back and very modern. This young lady was supremely comfortable in her clothes, face, hair, seat, demeanour.

Bunny lived mainly in France throughout these decades, making only brief visits to London and to Australia (in 1911 and 1928). He became a member of the Salon Nationale Des Beaux Arts, as did Phillips Fox, Agnes Goodsir and Bessie Davidson. He helped other Australians in Paris whenever he could eg standing up for David Davies when he married at the British Consulate in Paris. And best of all, Bunny had several exhibitions in Paris where he was lucky enough or talented enough to sell some of the paintings to the Musee du Luxembourg. Bunny was one of the few Australian artists of the time to establish an international reputation. In fact the French Government bought 10 of his paintings. 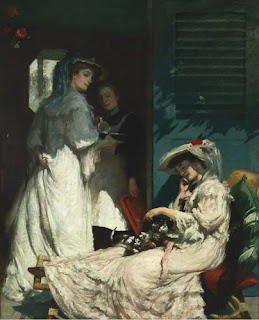 I have concentrated on Bunny’s painting of the feminine arcady; women at leisure, in gardens, on beaches and in parks. These much loved works were widely seen as epitomising the charm of France’s belle époque; his subjects were fashionable women who apparently did not have to work for a living. But this leisurely life was abruptly ended once WW1 commenced. Times were tougher, so his images changed, but more of that in a different article. His wife was ill, the money had run out and the art buying public were no longer fascinated with Belle Epoque images. His post-WW1 paintings, often landscapes, will be discussed elsewhere.

Bunny had always been involved in music in his young years and he composed music after his wife died in 1933. Now a lonely widower, he sailed home to Melbourne and spent the first summer painting in the city’s Royal Botanical Gardens. He painted the people of Melbourne walking in the gardens, sitting on the benches and lying on the grass. These paintings were probably intended to make money, and to appeal to Australians who enjoyed for Australian subjects. Not all the critics viewed these paintings well, but Melbourne buyers disagreed with the critics and only a handful were not sold.

Despite his strong reputation in Europe, Bunny was an ex-pat in his own country, not quite a Frenchman and not quite an Australian either. And it took a very long time before he was honoured at home with a retrospective exhibition at the NGV in 1946. But it was all too late. His local reputation was building nicely, just as he died in Melbourne in May 1947.

Tony Curren Gatecrash gave a reason for Bunny’s 2010 exhibition being so pleasant. Inlike so many Australian artists, Bunny pursued his own artistic ambition without over Australianising his work. I agree that Bunny’s art was largely French during the years 1884-1933, a huge chunk of his working life time. So I was somewhat surprised to find that many of his dreamy, symbolist paintings ended up in Australian galleries, now much loved. What appeared to be French fluff before WW1 came to be seen as intimate, sensual and beautifully crafted. 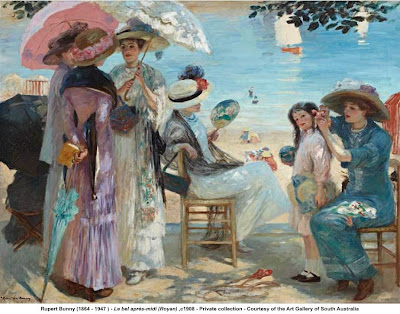 However I am absolutely aware that not everyone loves Bunny’s paintings. Melbourne Art & Culture Critic saw the exhibition and thought its only contribution was to give the viewers an interesting perspective on art history.

Your posts are so interesting - never heard of him before.

Paintings like Bunny's are full for study-fashion especially. They also evoke the era, times gone by. here with mostly women-an intimacy, secrecy pervades. I love the Nellie Melba portrait (a post unto herself)
pgt

little augury, of all the British, French and Australian artists of this Edwardian era, I am guessing that Bunny's art was the most full of accurate fashion detail. Although Tissot gave him a run for his money.

Malcolm Clark (see reference above) wrote "Bunny’s romantic portrayals of beautiful women left me puzzled at first. They were not what I would expect from a married man such as Bunny - no Madonnas, whores or sex goddesses. Bunny’s women
are glamorous idols who are very ‘theatrical’. Sensual yet
devoid of sexiness. Only when I was told that Bunny’s marriage was a cover for his homosexuality did his depiction of women make sense to me".

Now I have no idea about Bunny's sexual preferences or fashion preferences, but it shows that modern viewers are still stopped in their tracks by Bunny's feminine arcady.

His paintings are lovely - very much like Tissot, but I'm sorry, I can't get over his lovely, cuddly name.

I had not heard of him either. The paintings are captivating, especially because of the colour and the fashion detail.

Wow! So much information packed into your blog. Such passion and dedication to your interests! Love seeing the clothing in the paintings. So much social history with the stroke of a brush!

I had never heard of Bunny before, so thank you for this post! His paintings are lovely and romantic, which I suppose some people find rather dull. I think that it's just because they're jaded! (I followed the link to the post on Melbourne Art & Culture Critic).

Recently I found out that the house I live in currently in Hawthorn East, VIctoria, built in 1887, Rupert Bunny's sister lived in... the first occupier of this house with her husband. I began to look up his paintings as I learned he was a famous artist. Ironically, I have an obsession with all things french and am an artist myself.I have always had a passion for the french impressionists and love romantic paintings and ironically love painting women of an era gone by. I too, have a passion for music in various ways. He apparently had an interest to be an actor, whilst studying at Melb uni, engineering, however ended up painting.My children have had an interest in acting for years.
Personally I love his paintings. I love the way he uses light.He has painted, greek mythological paintings, however they don't appeal to me, despite being of greek origin myself.I haven't painted as much as I should've and he is now a great inspiration to me, especially as his style generally and themes are so my style. I'm very disappointed I missed the recent exhibition in the city. I am now a Rupert Bunny fan.

Thank you everybody for your comments. For an amazing range of Bunny's works, I have added a link to Blog of an Art Admirer and History Lover (June 2011)
http://www.artistsandart.org/