I have been fascinated by Romania ever since mum's sister married a Romanian. And since then I have read something of the country's exotic, if eventful history. Here is what I know. Its capital was first mentioned by name when it was recorded in a document of Vlad III the Impaler, ruler of Walachia. The three regions that now make up Romania were Transylvania, Walachia and Moldavia/Bessarabia. Although the language sounds Italian, the main religion is Eastern Orthodox, not Catholic. Now I am delighted to have a guest blogger writing about beautiful Bucharest architecture. Welcome Paul.

The city of Bucharest (Bucureşti) sits on the banks of the Dâmboviţa River, in the Eastern European country of Romania. People have inhabited this area of Romania since prehistoric times; it was first home to the Dacian Kingdom, and then it saw the Roman, Mongolian and Ottoman Empires, among others, come and go. Today Bucharest is the capital of Romania, and has a population of 2.5 million people.

Remnants of the city’s historic architecture, which date back to the mid C15th, are being unearthed today and can be seen around the Lipscani area. In the year 1459, the city was first mentioned in documents; in the year 1462 Vlad Ţepeş (the real Count Dracula) lost his life while fighting the invading Ottoman Turks on the outskirts of the city. Mircea Ciobanul (Mircea the Shepard), who was the grandson of one of Vlad Ţepeş’s brothers, built the oldest structure that is still standing in Bucharest and it is named the Old Princely Court (Curtea Veche, from the early C16th). 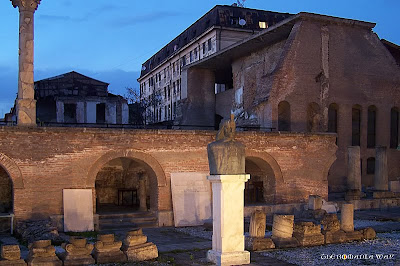 In the C18th, while the Ottomans controlled Romania, many Orthodox Christian churches were allowed to remain; fortunately Stavropoleos Church is one of them. The Greek monk Ioanichie built the church in 1724 during the rule of Phanariot Prince Nicolae Mavrocordat, using the Brâncovenesc style. That is a type of architecture developed in Wallachia during the reign of Constantin Brâncoveanu. 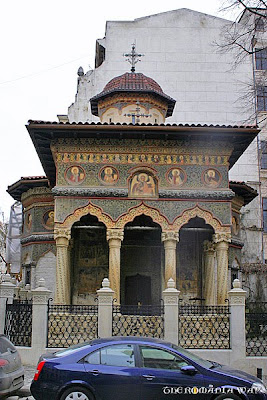 The Atheneum was built in the year 1888 in a neo-classical style, designed by the French architect Albert Galleron. Constantin Exarcu started the project, and the money for the completion of the building was gathered in a public collection in which people were asked to "give a leu (Romanian currency) for the Atheneum". Its beautiful facade is adorned with mosaics of five Romanian rulers, and its high dome and Doric columns give it a look of an ancient temple. On the inside of the Atheneum, there are scenes from Romanian history. Today the Atheneum is used as a place to hear classical music in Bucharest, and the resident orchestra is the George Enescu Philharmonic. 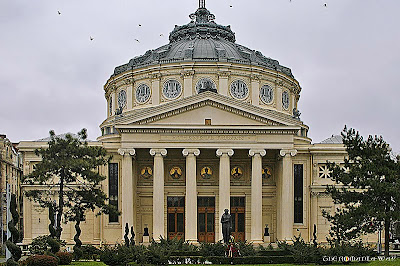 Central University Library (Biblioteca Centrala Universitara) is a beautifully building, founded by King Carol I and designed by the French architect Paul Gottereau, who also designed the National Savings Bank (CEC) building. The building received heavy damaged during the December 1989 revolution and has since been restored. It is buildings such as this one, and Bucharest’s very own Arc de Triomphe, that are responsible for Bucharest once being called “The Little Paris Of The East”. 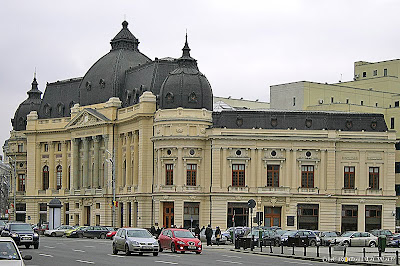 During Nicolae Ceauşescu’s communist rule of the country, a great number of historic buildings were replaced with government buildings throughout the city. One of those buildings is the Peoples House, now called the Parliament Palace. Many Romanians have mixed feelings about this building because 26 square km of homes, churches and other buildings were destroyed to build it. The Parliament Palace measures 270 m by 240 m, 86 m high and 92 m below ground, it has 12 levels, and holds 8 titles in the Guinness Book of World Records. It is the second largest building in the world next to the Pentagon building in the United States. It was from this building that communist leader escaped the revolution by helicopter, only to be caught soon after in Târgovişte Romania, with his wife Elena. 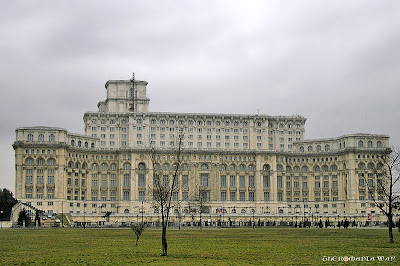 I hope you enjoyed seeing some pictures from one of my favourite cities in the world. Bucharest has so many beautiful buildings and parks, and it would take a very long time to list them all here. If you have the opportunity, I highly recommend that you visit and see them for yourself. 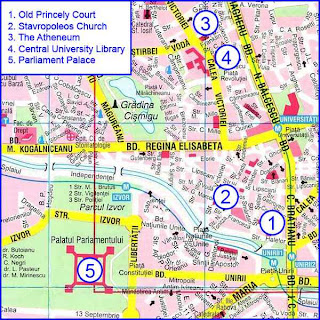 The map of central Bucharest has been added so that you can see the five main sites in relationship to each other, as well as the University and Cismigiu Gradina/Park. This central park is one of the most charming parks in eastern Europe.

I like Stavropoleos Church. But after being Soviets for such a long time, do people in your city go to church these days?

Good to hear from you, Jack.

I was looking at wedding photos in Bucharest and found the very attractive Domnita Balasa Church which seems to have survived Ceauşescu’s penchant for pulling down historical buildings. But I will ask the guest blogger for more information.

Jack, just to be clear about one thing that many people do not know, Romania was never part of the Soviet Union. Orthodoxy is a very big part of Romanian life, so much so, that when Ceauşescu had the Parliament House built, he was wise enough to move a few historic churches that stood in the way of its construction (the beautiful Mihai Voda Church is one of three that I know of).

You can read a little about religion in Romania by visiting my blog, and reading the post about Easter in Romania.

What a wonderful post! I have visited Bucharest twice, and found it a lovely city.

Thank you for this post and the beautiful photos. I'd love to visit Bucharest!

A visit to Romania is high up on my places to visit list. I am particularly interested in the textile folk tradition which seems so diverse and complex. Thanks for a very informative and fascinating article.

I was looking at old photos from Russia. I think that I saw this story on ABC.

trellis
the guest blogger for this post, Paul, certainly knows a lot about Bucharest. I hope travel and history programmes about Bucharest are starting to appear on television - people will love what they see.

What an amazing post. Bucharest is a wonderful city and every person should consider visiting it. It combines very well western atmosphere with eastern lifestyle and that where its charm comes from. I recommend to anyone who hasn't been there yet, to go and experience something different.
And don't forget to visit the Palace of the People. :)
Regards!

I think you nailed it - western atmosphere with eastern charm.

Very interesting. Amazing how some in the art world responded, like you point out, identical to the views of the Nazis. Glad to see you solving the great robert Gaines. Well, at least all of these paintings stayed safe in Australia during the war, so the tour may have been a blessing in disguise

it is difficult to know, in advance, if a guest blogger is going to be appealing to readers. I am delighted with the outcome.