Joyce Carol Oates (b1938) was born in N.Y state, daught­er of a tool des­igner. She studied English at Universities of Syracuse & Wisc­on­sin, then taught Eng­lish at Uni of Detroit (1961-7) and Uni of Wind­sor in Ont­ario (1967-78). From 1978 she taught at Princeton Uni. In 1961 she marr­ied Raymond Smith, a fellow academic and ed­itor. Tog­ether they published the literary magazine Ont­ario Review.
This American novelist was known for her vast literary production. Early in her career Oates wrote short stories for magazines and rev­iews, incl­uding for the Literary Rev­iew, and in 1963 she pub­lish­ed her first collection of short stor­ies, By the North Gate. Her first nov­el, With Shuddering Fall (1964) was followed by anot­her short-story collection, Upon the Sw­eeping Flood (1965). Other not­ab­le fiction works included A Garden of Earthly Delights (1967) and Them (1969), winner of a National Book Aw­ard. 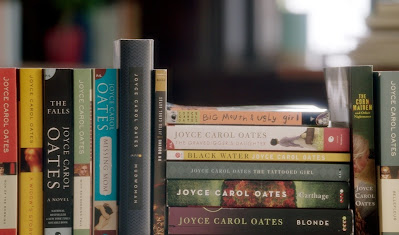 Note her de­pictions of violence and evil in mod­ern soc­iety. She typic­ally portrayed American individuals whose deeply experien­ced lives ended in self-destruc­tion owing to larger forces of violence. But why? Her life had been hard. Her severely autistic sister was institut­ion­alised and Oates never saw her again. Oates' maternal grandfather was murdered in 1917, causing Oates mot­h­er's ad­opt­ion; and Oates's pater­nal grandmother survived, at 14, her own father’s suicide. As a child, Oates’s next-door neighbour was guilty of arson and at­tempted murder charges against his family, and was gaoled in Attica. Her paternal grand­mot­h­er, Blan­che Wood­side, lived with the family and was very close to Joy­ce.

Raised as a Catholic, Joyce discovered later in life that her grand­mother Blanche had been a Jew who fled Ger­many and had kept her id­entity hid­­den for­ev­er. Granddaughter’s grief came from lamenting her lost cultural her­itage, while ack­now­ledging that her respect for cul­ture and art was indeed inherited from gran. Since she dis­covered her family’s history was Jewish only AFTER gran’s death in 1970, Oates later drew on aspects of gran's life in writing the nov­el The Grave­digger's Daughter (2007). When Joyce’s loved husband Ray Smith died of pneumonia in 2008, she was so grief-stricken and de­moralised that friends feared she might suicide. The pain never ended.

Swedish documentary-maker Stig Björkman had been long asking Oates to let him make a doc­um­ent­ary about her life, but she always refused. Now, many years later, she finally agreed. The first half of the docum­en­tary (JCO: a Body in the Service of Mind) was Oates’ car­eer story, connect­ing her early work to her later fame and tackling its subject by going back and forth between different bits of her life. The second half focused on earl­ier mom­ents of family history. The viewers sat with her in her sanc­t­uary, the writing room.

As Oates has written 100+ books and became famous, Björkman wanted to know why she focused on city riots, domestic beatings and mur­der, mis­ery, mystery and yearning. Oates quietly gave careful analyses about the U.S’ violent history and con­temp­orary times. She wrote about how power cor­rupted, described the presence of viol­en­ce, told the forg­otten stories and examined the idea of ​​authentic­ity. Did it take constant work to maintain human virtues eg dignity and civilisation? Clearly yes, since brutal­ity­ shuddered under the thin veneer of civilisation. 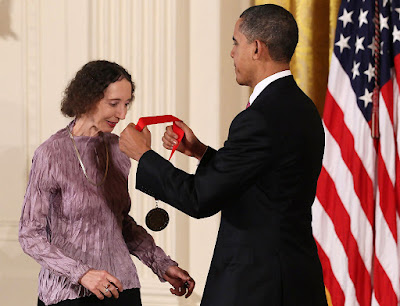 Pres Barack Obama
awarded the 2010 National Humanities Medal
Björk­man moved with the same ease in his film as Oates did when she wrote: curious & knowledgeable! From her tough beginnings on a farm, her difficult childhood and prolific career, the reclus­ive Oates spoke to the cul­tural shifts that shaped her moral compass and her keen interest in social justice. Bjorkman gained great access into her life and studio, her second mar­riage, her hand­written work and her be­loved Jewish grand. Thus in this film, Oates carefully discus­s­ed the societal events that in­for­med her writ­ing.
In 2010 Pres Barack Obama awarded the National Humanities Medal at a White House ceremony to Oates for a lifetime of contributions to Am­er­ican literature. And she won the prestigious Jerusalem Prize for the Freedom of the Ind­iv­idual in Society (2019), a biennial literary award given to writers whose works have best dealt with themes of human free­dom in society. 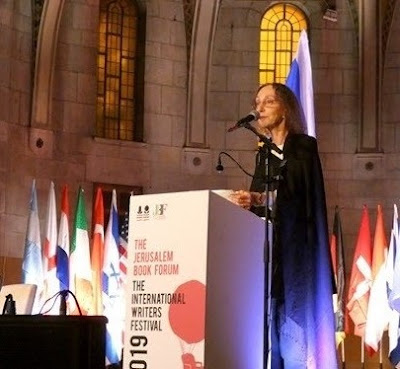 Thank you speech
2019 Jerusalem Prize for the Freedom of the Ind­iv­idual in Society
Her blen­d­ing of history, fiction and memory was as much a respectful tribute as it was powerful film-making. Thank you, dir­ec­tor Stig Björk­man, the man who examined her life via her books. From the poor up­bringing on an upstate New York farm, via the boisterous university days and the long life of teaching and endless writing.

Australians can see the film from 6th Nov 2022.

To see this fascinating documentary, book tickets with the Classic or Lido Cinemas in Melbourne, the Ritz Cinema in Sydney or the Luna Palace in Perth.

I'd love to see that documentary in the UK. We do have a Jewish Film Festival (I was in it once!), maybe they'll show it. Some years ago I decided to read some female US writers that I had overlooked: I found Annie Proux, Toni Morrison, Maya Angelou & Donna Tart but never got around to Joyce Carol Oates.

Helen, I found a great article for you and included two paragraphs here.
Student of History

Violence is never the ultimate point of an Oates story. Rather the violence acts as either catalyst or climax to a dramatic progression: Through violent events, characters undergo almost inevitable transformations, and the suddenness of violence or the sharpness of pain jolts characters into a greater appreciation of life. Frequently, the violent event or action is often anonymous, perpetrated by unseen hands for unknown reasons, presenting mysteries that will never be solved. Violence becomes an emphatic metaphor for the arbitrary hand of fate, destiny, chance or God. For Oates, it is simply the way things are.

Beneath the passion, deep feeling and violence of her stories, there is a meticulously intellectual mind that is evident, looking at the larger picture, in the wide array of devices that Oates employs over the range of hundreds of stories. Some of her stories turn on the use of imagery, tone, or rhythm, and plot is all but nonexistent; others are journalistically rich in event and sparse in stylistic embellishment.

BY NASRULLAH MAMBROL on JUNE 19, 2020
Literary Theory and Criticism

I am not familiar with this author but you have drawn my attention to Joyce Carol Oates I will keep an eye out for her work.

many thanks for the Festival booklet. I love international film festivals from all over the world, but this will be the first time I have been since before Covid.

Hi Hels - I too am not familiar with her books ... might try one of her short story books ... thanks for the opening to her works. Cheers Hilary

I largely read Australian, British, French and German novels in high school and university, male and female authors. So there was a lot of catching up to do decades later, but not Joyce Carol Oates for some reason. I must thank blogging friends for broadening my literary experiences.

I have only read one Oates story, and already find your analysis accurate and helpful. I will read the rest tomorrow at my Sunday coffee rest in the sunshine :)

I had never even heard her name either, until I received Black Dahlia & White Rose (2014), a book of short stories. Oates writes in a very enticing manner but if you easily suffer from nightmares, I would read her books with a lighter heart than normal. Sometimes Oates leaves the final ending uncertain, and sometimes she implies events not actually spelled out, increasing the anxiety in some readers.

short stories are exactly the right way to start. Oates' short stories show the same writing talent and character development as her novels, yet they don't commit you to hours and hours of reading.

Joyce Carol Oates first had the idea for her novel Blonde (published 2000) after coming across a 1941 photograph of 15-year-old Norma Jeane Baker posing as a winner of a California beauty contest. In 1946 that same young woman signed a contract with 20th Century Fox and took on the stage name that defined her life: Marilyn Monroe.

Still, Blonde isn’t a biography of the iconic Hollywood celebrity. Instead Oates constructs an epic narrative about public and private personas, exploring how a woman who simply wanted to be taken seriously as an actor was flattened into a desirable product by a rapacious industry. I was never much interested in the celebrity side of Monroe, only in the personal, inward aspect of her being.”

Andrew Dominik’s film adaptation, which premieres on Netflix Sept 28th, follows in those fictional footsteps. “Blonde is a dream film about Marilyn Monroe. It’s about the image as much as the person.” Oates has given the movie her blessing.

the timing is amazing, thank you. And I am very pleased to see that Oates gave her blessing to Andrew Dominik's fictional presentation of Marilyn Monroe.

Hopefully some readers will see Dominik’s film on Netflix and will add shortish reviews on this blog.

I am sure that the Swedish documentary-maker Stig Björkman will be invited to present at many International Film Festivals during 2022 and 2023. Oates is in her mid 80s already, so this documentary might be the last chance anyone had to discuss her thinking.

Dear Helen, I read a few of Oates' novels during my student's day. Your article gives me a better understanding why her themes are so dark. I'd love to see the documentary of Stig Björkman (great that he didn't give up his intent for such a long time!) - and will have to surf the internet to find out whether I find a possibility to watch.

I am impressed :) By the way, what language do you read novels in?

Definitely see the documentary because Oates was more self-revealing than you could imagine anywhere else. Bless his heart for his endless patience.

thank you. Are your students given Oates' novels to read for English Literature?

thank you for reading the post. But no advertising please.