Aus­­t­ral­ia’s first surf life saving clubs arose on Sydney’s ocean beach­es in response to a shift in beach culture in the early 1900s. Sur­f­ing had been prohibited in daylight hours in Sydney until Rand­wick City Council lifted its ban, in response to drought in 1902. As oth­er coun­­cils followed, bathing became more pop­ular, causing a dramatic rise in beach rescues and drownings. In Oct 1907 the Bondi Club met with others, to form Surf Life Sav­ing Australia. 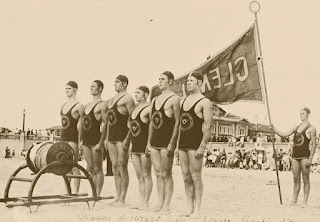 Surf line and belt men
Glenelg Adelaide, 1938
Even strong swimmers had difficulty negotiating unfamiliar rip cur­r­ents and changing surf conditions. Surf Line & Belts were invented at Bondi Beach in 1906 and pioneered by Sydney surf life­saving clubs. The lifesavers fed out a long rope attached to a belt, which was worn by a beltman who swam out to those struggling in the wat­er. Or people in danger could be rescued by a lifesaver with a rescue tube, on a rescue board or in an inflatable rubber rescue boat. Jet-pow­er­ed surf rescue boats and helicopters came later. 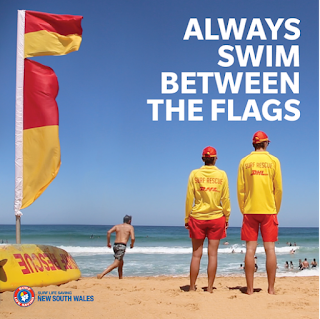 Swim between the yellow & red flags, in the patrolled area 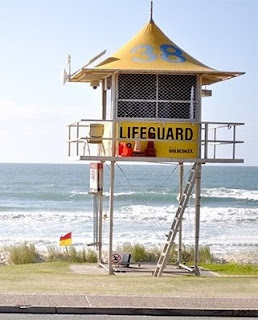 Life guard box with chairs, binoculars, phone, medicine boxes
To reduce the num­ber of crises, sw­immers had to always swim WITHIN the red & yel­low flags, safer sp­aces than the unpatrolled areas OUT­SIDE the flags. Mandating the flags in 1935, there were few sights more emblem­atic of Australia than red-and-yellow flags in the sand.
Black Sunday was a boiling hot day in Feb 1938 when thousands of people flocked to Bondi Beach to enjoy the water. At 3 PM huge waves all of a sudden crashed into the coast and dozens of swimmers soon needed resuscit­ation on the sand. Five swimmers tragically lost their lives. 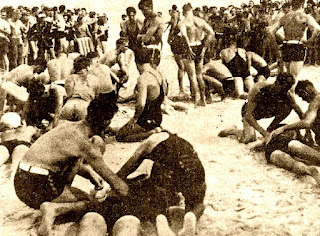 resuscit­ating surfers on Bondi Beach
Black Sunday, Feb 1938
The original training manual was heavily orientated to a milit­ary drill-type approach. But by the early 1950s a group of dy­namic physical educationalists in the NSW Branch, st­ar­t­­ed devel­op­ing tech­niques specific to Australian conditions. By then, water safety and lifesaving programmes were being taught in most Austral­ian schools.
Today Surf Life Saving Australia/SLSA has c182,000 members, making it the lar­gest volunteer movement of its kind in the world. Cover­ing this large island’s coastline, the 314 affiliated surf clubs stand as an icon of our ocean landscape. They became places of life saving, com­­fort, community and friendship i.e the Aust­ralian way of life. SLSA shows c9,000 rescues each year, while 294 people (mainly men) drowned around the nation in 2021, after 245 had drowned in 2020.
Because Australians are swimmers, surf clubs eventually became much the cen­tre of the social life in coastal commun­it­ies. Those surf clubs did plenty OUT OF the water in terms of giving people a pl­ace to gather and share fun. This sense of commun­ity extended beyond the membership base, particularly in Qld where clubs housed fea­t­ure food and bar facil­it­ies. In these cases, crowds enjoyed a fairly priced and relaxed pub meal with great waterfront views. 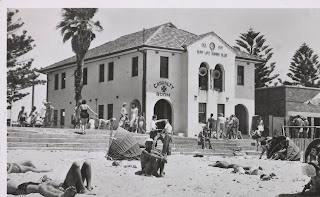 1936 version of Dee Why Life Saving Club, Sydney
Currumbin’s spectacular location on Elep­h­ant Rock Qld looked right over the water’s edge. Some hours north, Noosa Heads Surf Life Sav­ing Club was a relaxed space in prime position. Oceanside elegance was part of Noosa’s appeal, but so was the casual clubhouse.

As one of Sydney’s first clubs, North Bondi desperately needed a makeover after years of sloppy fixups. Unveiled in 2013, the 4-storey clubhouse was redesigned with practical architecture that de­manded at­t­ention from this beautiful, prominent beach. North Bon­di clubhouse was designed to address both the beach and the street and to copy the adjacent bay through its sweeping cur­­­ves and shiny mosaic tiles. Carefully placed window frames cr­eatively show­cased Bondi’s beauty, but it was also built to withstand harsh oceanic weather conditions. The $6.8 mill building was made poss­ible by government funding and donations, as well as the gen­er­ous charges by skilled contrib­utors, guaranteeing an in­come stream by making the facilities available for hire. North Bondi wel­com­es c2.7 m vis­itors yearly (but it also has a personal connection; my beloved surfed on Bondi Beach each morning before school in the 1960s).

Less than 2 ks south of North Bondi, Tamarama’s 1906 clubhouse was arch­it­ecturally very different. On the famous Bondi to Bronte walk, the Art Deco building with its sandy fac­ade rep­resented its mem­bers perfectly. The building sat broadside at the clifftop, buf­f­et­ed by southerly storms for decades, yet in­side it’s warm and we­l­c­om­ing; casual and retro, reflecting the cl­ub’s sensib­ilities. 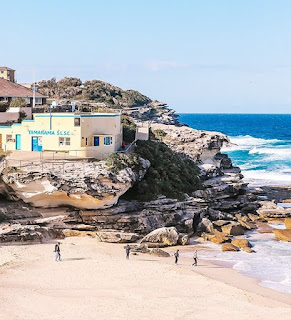 Tamarama Club, Sydney
Note there’s nothing casual about the lifeguards having to pat­rol the wat­ers below. 80 ms long, Tam­arama Beach is wedged betw­een two headlands and strong rip currents create dang­er­ous cond­it­ions. So it’s closed to swim­mers for part of the year. Yet the glorious out­look makes it popular. Inevitably the Tamarama club­ house needed change; happily architects kept the charm of the original building while completely upd­at­ing the interior space and facilities.

Clubhouses at Devonport and Bicheno in Tasmania, Seaford in Vict­or­ia, Kempsey Crescent Head in NSW and City Beach in Perth all won ar­chitectural aw­ards, while at Broadbeach on the Gold Coast, Kurr­awa opened its new $17 million facility in late 2017.

Lorne is a scenic town on the Great Ocean Road out of Melbour­ne. Established in 1947, the Lorne Surf Life Saving Club claimed never to have lost a single life between the flags. The Club was at the forefront of change in life saving, being the first Club in Victoria to employ a full time lifeguard when rostered patrols were not on duty. Their programme now covers 27 surf beaches with lifeguards. 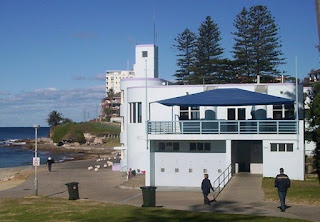 The Surf Life Saving South Australia in Glenelg hosted the 2012 world championships. In a coup for the state body and the Glenelg club, the world titles returned to Adelaide’s most popular beach in 2018.
Pre-WW1 Bondi Pavilion had changing boxes for male and female swimmers. And in 1929 it was expanded to hold music and dances. Now it has been given a major make­over designed to trans­form it into the suburb’s cultural heart. The revamped site has opened to visitors, with 3,000 interlocking Spanish terracotta roof tiles installed and 200+ solar panels catering for 70% of the site’s energy use. And note the 1920s murals that have been incorporated into the new spaces.
Posted by Hels at 27.9.22

Because Melbourne is wrapped around Port Phillip Bay with its very narrow entrance, I agree that the local beaches do not enjoy surf conditions. But Victoria has excellent surf beaches facing Bass Straight, as long as people are prepared to drive a decent distance.

I knew nothing about the cap issue until you mentioned it. Apparently in 2011 there was a vote across the nation as to whether the cap should be changed because a] it looks daggy for young life savers and b] it offers no sun protection. 73% of lifesavers surveyed voted to keep the iconic red and yellow cap, happily.

I am assuming beach swimming was banned during the day because there were no changing facilities. And even if people wore neck to knee bathing suits, I suspect the authorities were worried that male and female genitalia might be glimpsed during the day.

But that led to a worse problem. As much as I think paid or voluntary life saving is essential, there is no way I would go into the surf in the pitch black of night to try to find a struggling swimmer. Hopefully swimmers remained at the edge of water at night to wade.

I know Brasil has wonderful surfing beaches... are you a fan yourself?