Trier had originally been annexed by revolutionary France which lifted all the restrictions on Jews and gave them full and equal citizenship. With Napoleon’s fall in 1815, Prussia expanded to ab­sorb the Rhineland, but demoted its Jews. This policy meant that they could no longer serve as lawyers, judges, teachers, civil ser­vants or university lec­t­urers – unless they became Christians.

Her­schel Marx (1777–1838) was the first in the family to receive a secular education, even though his father had been a Trier rabbi. In 1815 Herschel worked as a lawyer with a comfortable in­come; and in addition, the family owned some Mosel­le vineyards. 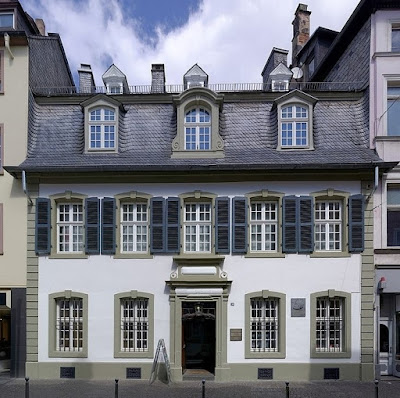 Karl Marx was born here in 1818
Today the building is the Marx Museum, Trier

Largely non-observant, Herschel was an Enlightenment thinker, reading philosophers Immanuel Kant and Volt­aire. A classical liberal, he took part in agitation for a constitution and reforms in Prussia, at that time an absolute mon­ar­chy.

Herschel Marx was one of several thousand af­fected by Prussia’s discriminatory measures. He worked in a period of great alienation and subsequent radicalisation of the Jewish intel­l­ig­en­t­sia in the Rhineland. He fought discrimination for sev­eral years, dist­anc­ing himself from Jewishness, but eventually he gave into the Prussian state. NB he didn’t convert to the predominant Cathol­ic faith, but to Lutheran Protestantism because he equated Protest­antism with intellectual freedom. Yet he still cont­inued to be the legal represent­at­ive of Trier's Jewish community and his brother was its Chief Rabbi. Imagine what family dinners were like!
Karl Marx (1818-83) was born in Trier, in the Lower Rhine. His father was the above mentioned Herschel-Heinrich Marx & his mother was Hen­r­iette Press­burg (1788–1863), also the child of a rabbi. Hen­r­iette was a Dutch woman from a prosperous business fam­ily that later founded the Philips Electronics Co. Her sister Sophie Press­burg mar­ried Lion Philips, a wealthy Dut­ch tob­acco manuf­ac­t­urer, on whom Karl later relied for loans when living in London

Heinrich and Henriette’s home in Brücken­gasse eventually had 9 children, occupying 2 rooms on the ground floor and 3 on the first floor. Bought by state govern­ment in 1928, the building now houses a Marx Museum. Of the 9 child­ren, Karl and his surviving 6 siblings were bap­tised into the Luth­eran Church in Aug 1824. But his mother waited until 1825, after her own father died. Although as a youth Karl was in­fluenced less by religion than by the rad­ic­al social policies of the Enlightenment, his Jewish background exposed him to prejudice. That led him to question the role of religion in society and contributed to his desire for social change.

Karl was priv­ately educ­at­ed at home by his father when he ent­ered the Jesuit Friedrich-Wilhelm Gym­nasium in Trier for 5 years, 1830-5. The school principal, a friend of Karl’s father, was a liberal and a Kantian, and was respected by the city’s citizens but not by the Education Dept authorities. The school was raided in 1832. 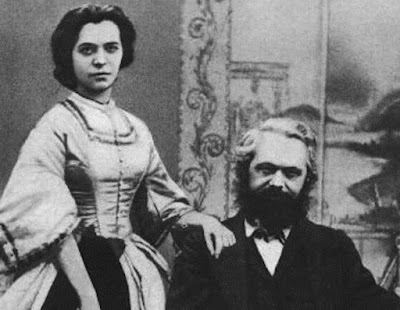 Karl and Jenny married in 1843
Wikimedia Commons
In Oct 1835 at 17, Karl travelled to Bonn Uni to study philosophy and literature, but his father insisted on law as a more practical field. Bonn had a lively and rebellious culture, and Karl eagerly took part in student life. He joined the Poets' Club (political radicals monitored by the police), and during that time he was gaoled for drunk­en­ness, disturbing the peace, debts and duelling.

Karl was ex­cused from military duty at 18, on health grounds, and his father insisted he enrol in the ser­ious Berlin Uni. In Berlin a circle of brilliant think­ers was chal­lenging existing institutions: religion, phil­osophy, ethics and politics. Karl whole­heartedly join­ed this group of radical think­ers.

In Berlin, he studied law and philosophy. Karl was not initially enamoured with Hegel, but he soon be­came involved with the Young Hegelians, a radical group of students who criticised the political and religious establish­ments. Karl also joined the Trier Tavern Club drinking soc­iety. And was invol­ved in some serious disputes eg in Aug 1836 he duelled with a mem­ber of the university’s German Student Corps . Nonetheless he spent four happy years in Berlin.
In 1836, as he was becoming more committed to politics, Marx was eng­aged to Jenny von Westphalen, a lovely older woman from an upper class family in Trier. This, along with his increas­ing radicalism, caused his father angst. In letters, father Hein­rich admonished his son for not tak­ing marital responsib­il­­it­ies seriously enough.

Karl received his doctorate from Jena Uni in 1841, but his radical politics prevented him from getting a lectureship. Instead he began to work as a journalist, and in 1842 he became the editor of the liberal Rhein­ische Zeitung news­paper in Cologne.. until the gov­­ern­ment ordered the news­pap­er’s suppression in April 1843. 3 mon­ths later Karl final­ly marr­ied Jenny, and they moved to Paris in Oct.

On the Jewish Question (1843) was Karl’s infamous essay in which he disparaged Jews for forging a connection with capital­ism. A year later Karl wrote ess­ays to The Holy Fam­ily (1844), where­ he revert­ed to a positive attitude towards Jews. But was the change an emot­ional reac­t­ion to his father’s treat­­ment? Was it the infl­ue­n­­ce of his friend, Moses Hess, the fut­ure father of socialist Zion­ism? Hard to tell since Karl Marx was, to some ex­tent, reinvented by those who came after him. 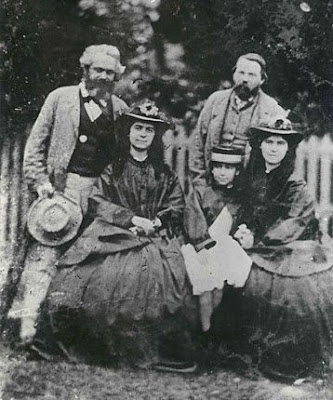 Karl Marx & Friedrich Engels, Wiki
and the 3 Marx daughters: Caroline, Eleanor and Laura, c1865.
In 1843, Karl and Jenny moved to Paris where he met German ém­igré Fried­rich Engels who became his lifelong friend. Of the three surviving Marx children, two mar­ried Frenchmen, and both of the sons-in-law became prominent French socialists and members of Par­­liament. Daughter Eleanor was active as a British labour organiser.

Karl and Jenny moved to London in mid-1849 and remained there for life. He spent most of his hours in the British Museum, doing res­earch for his hundreds of articles and brochures, and his few books.

Many thanks to World Biography and to infed.

The greatest influence was Friedrich Engels, in my opinion. They worked together for decades, wrote Manifestos together and participated in the 1848 Revolution together. What a great life, after the struggles back home.

Helen. For most people, university is the freest time of our lives, with booze, sex, duels, literature and political protest marches. Most of Marx's intellectual excitement came then, even if his thinking changed a bit, later on.

Almost everyone knows the name Karl Marx but you have briefly filled in his background very well. Thanks Comrade.

Thank you for shedding light on Karl Marx's background.

Probably no greater influence on Marx was the time in which he lived; through enormous revolutionary times in Europe the great strikes that spread and the Commune Government 1871. He was there always involved with agitation, pamphlet writing and frequently in trouble with the authorities. When exiled to London he lived in dire poverty with barely anything but rags for the children, mud for roads in central London just away from the rich a few 100 yards up the road, (so the influence on him and the revolution continued), cold, and rarely any food except by scrounging and writing to Engels for money. (I am recalling this from reading a biography a few years ago).

Marx (and many others of course) had a very difficult time in Germany, although he enjoyed a very satisfactory tertiary education. Alas even with a doctorate in hand, he still couldn't secure a lecturing position in the uni of his choice.

When the family settled permanently in Britain, he and Engels felt free at last to research, write journal articles, go to conferences and publish books - without fear of difficult consequences. It was a very confident time in his life.

that used to be very true for most university students *nod*. My four undergrad years in the 1960s were filled with anti-Vietnam rallies, women's movement meetings and Labour Party history writing. Peoples' views changed in the decades since, but it was 4 years of great intellectual excitement.

Marx's greatest excitement came from radical leftist intellectuals, the Young Hegelians, who was seeking a new form of society. It was an exciting, intense time until Marx later became a bit disillusioned with Hegel’s philosophy, despite the impressive involvement of historian Bruno Bauer and anarchist Max Stirner. Plus Marx met and loved alcohol :)

it is still a fascinating era in politics and philosophy to us now, even though we are talking about the mid 19th century. Thank goodness almost all of Marx's writing has been preserved.

Marx was totally famous in the 19th and early 20th centuries, and even in nations that never went along a socialist path, economics and philosophers still needed to be fully informed about his carefully thought out views. It wasn't until the Russian Revolution that capitalist nations found that Marxist views were sooo dangerous that they had to be avoided at all costs.

As a result, as you noted, modern people know nothing about his life in Germany and Britain, his beloved wife and children, his books etc etc

I know a great deal about some topics and can write blog posts without even looking up references eg Bauhaus architecture, Huguenot silver and silk. But writing about Karl Marx was a struggle. I have never formally studied anything about Marx in history or economics or philosophy!

The time in which he lived was indeed revolutionary and many people who were half way aware of creating a better society dedicated time and energy to the cause. And you are correct that as a result of his revolutionary activities, he was frequently in trouble with the authorities.
But that is what committed thinkers/writers did - they dedicated themselves to helping societies' strugglers.

It doesn't matter whether we disapprove of some of Marx's thoughts now or not. All we need to do is to respect and teach his remarkable work, back in his lifetime.

You may like to read "Karl Marx and Frederick Engels: Articles on Britain", published in Moscow in 1975. The book is long, but the notes, names index and chapter headings are clear.

He was exiled in London from France, deported. He did not come of his own choosing. He was in my opinion not a good husband even if she was his beloved wife. She suffered greatly through his way of life, not having work and leaving her to deal with bailiffs while he hid etc. Engels grew tired of his constant pleas for money.

Rachel
if we ignored the work of all men who were less than model husbands, we would have few poets, artists, academics, politicians and sports stars to admire 🥺

Thank you for the name of the book . I wouldn't dream of suggesting we ignore those who are bad husbands, nor did I. I was merely stating a fact because you had mentioned the wife. I have been interested in Marx for years and Marxists in our opposition party make it an ever current situation.

I wish I knew about Marx and his colleagues. I studied history for years and never heard their names mentioned :( Now, of course, I read what I like :)