How appealing was the Rosie The Riveter campaign for U.S women in WW2? 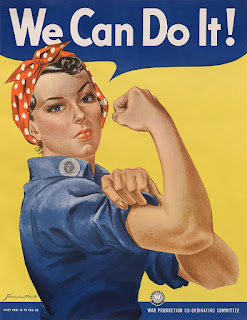 We Can Do It! 1942
by J Howard Miller
Norman Rockwell Museum, Mass
c350,000 women joined U.S’s Arm­ed Services, serving at home and abroad. As encouraged by El­eanor Roose­velt, and impres­sed by the British enc­ouragement of women in ser­v­ice, Gen George Marshall supported the introd­uc­tion of a women’s service branch into the Army. In May 1942 Cong­ress inst­ituted the Women’s Auxiliary Army Corps/WACs, later the Women’s Army Corps. Mem­b­ers worked in 200+ non-combatant jobs in the US and in theatres of war.
The prototype for the famous Rosie the Riveter was actually created in 1942 by Pittsburgh art­ist J Howard Miller, and was featured on a poster for West­ing­house Elec­tric Corporation under the headline We Can Do It! This poster was disp­layed in Westinghouse factories to encourage more women to join the war­time lab­our force. It feat­ur­ed a wom­an in a red-and-white polka-dot headscarf and blue shirt, flex­ing her bicep! For years, the inspiration for the woman in the Westing­house poster was believed to be a specific Michigan woman who worked in a Navy mach­ine shop in WW2. The poster was only displayed by Westinghouse for a fortnight in Feb 1943, and then rep­laced by other promot­ional images.
Another inspiration was a popular song called Rosie the Riv­et­er which was written by Evans & Loeb, and sung by the Four Vagabonds in 1943. Listen to youtube.
All the day long whether rain or shine
She’s a part of the assembly line
She’s making history, working for victory
Rosie the Riveter
Keeps a sharp lookout for sabotage
Sitting up there on the fuselage
That little frail can do more than a male will do
Rosie the Riveter

From then, the name Rosie went down in U.S history.
At the same time, see the painting that was commissioned by Britain’s War Artists' Advis­ory Committee as part of their WW2 war effort. Ruby Loftus Screw­ing a Breech-ring 1943 was a painting by UK artist Laura Knight depict­ing a young woman working at an industrial lathe, cutting the screw of a breech-ring for a Bofors anti-aircraft gun. The tough looking image was reproduced in large-scale poster version by the WAAC for display in factories across Britain. 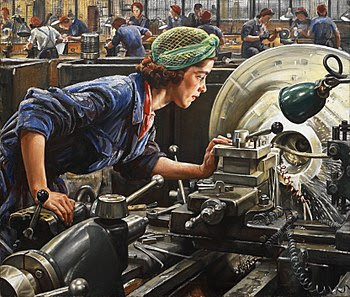 Once America joined the war, women entered the work­force in record numbers, since widespread male en­listment left gaps in the industrial lab­our force. In 1943-5, the female percentage of the U.S work­force increased from 27% to 37%. Women in wartime worked in a variety of pos­it­ions previously closed to them, especially the aviation industry. 310,000+ women worked in the U.S air­cr­­aft industry in 1943, making up 65% of the industry’s total work­force (1% in the pre-war  years).
By late in the war in the U.S, there were 100,000+ WACs and 6,000 female officers. In the Navy, mem­bers of Women Accepted for Volunteer Emergency Service at home held the same status as naval reservists. The Coast Guard and Marine Corps soon followed, though in smaller num­bers.
One of the other roles women played was prov­ided by the Women’s Airforce Service Pilots-WASPs. Hav­­ing already won their pilot’s license pre-serv­ice, these women became the first to fly American military aircraft, from factor­ies to bases, transporting cargo, sharing in simul­ation tar­get mis­s­ions, and freeing thousands of male U.S pilots for active duty. 1,000+ WASPs served, and 38 of them died during the war. Considered civil service employees without official military st­atus, fallen WASPs unbelievably earned no military honours or bene­fits!
The munitions indus­try also heavily recruit­ed women workers, as ill­ustrated by the U.S govern­ment’s Rosie the Riv­et­er propaganda campaign. This image was created by the famous artist Norman Rockwell. On the front cover of Saturday Evening Post in May 1943, Rock­well’s poster depicted a woman in a blue work jump­suit with a riv­et gun on her thighs, a sandwich in hand and a foot plac­ed on Hitler’s Mein Kampf. The woman’s lunch box said “Rosie”, linking her to the song.
Rosie the Riveter became the most iconic recruiting image for working women. Based on a real-life mun­itions workers, confident Rosie became one of the most successful recruit­ment tools in American hist­ory. In film, newspapers, posters, photographs and art­ic­les, the Ros­ie campaign stressed the patriotic need for women to join the work­­force. 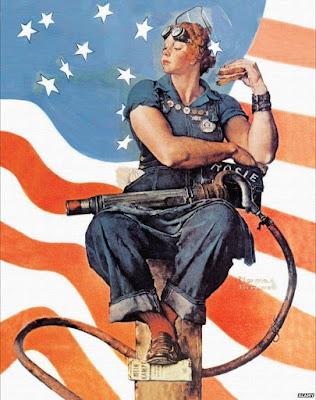 Rosie the Riv­et­er poster
by Norman Rockwell.
Saturday Evening Post in May 1943
Although women pre-1943 had been mostly occupy­­ing the private space, the war campaign of Rosie the Riveter was said to inspire many of them to work in priority jobs. But exactly what short and long-term changes in women’s lives were brought about by the Rosie the Riveter campaign? Enjoy “From Empowerment to Dom­est­icity: Case of Rosie the Riveter and the WWII Campaign” by Maria Sant­ana.
One success of this era was how women adapted to factory work without uniforms or safety equipment. Women shoes with metal tips were first manufactured in 1943, AFTER women became factory work­ers. And as American women began wearing pants anyhow, it was approp­riate and fortunate that pants managed to spread to factory attire.

The call for women to join the workforce in WW2 was meant to be tem­­porary; women would leave their jobs after the war ended and men came home. So it wasn’t surprising that for women who worked during WW2, their pay continued to lag far behind their male counterparts: c50% of men’s. Even the women who stayed in the work­force cont­inued to be paid less than their male peers and were us­ually demoted. But after women’s selfless war efforts, men could no longer auto­matic­ally claim superiority over women. Women had thrived on a taste of financial and personal freedom! The impact of WW2 on women changed the workplace.
In 2020 U.S leaders gave 5 million civilian women who served in the defence industry in WW2 the official recognition they deserved. They bestowed the Congressional Gold Medal to the group of women known by its ubiquitous embodiment: Rosie the Riveter.

The face and position of Rockwell's Rosie is just gorgeous, super confident and above petty criticism by men.

Rosie is such an iconic image. I am surprised it was displayed for such a short time yet is known around the world.

At least Melbourne Metropolitan Tramways Board saw fit to pay female conductors employed during WWII the same rate as men, and later paid female tram drivers the same as men. And it would be hard to argue otherwise.

You are spot on. Her face shows pride, determination and nonchalance all at the same time. Even if her new tasks are going to be tough, she will master them.

I like the photos, and the song-line about Rosie " that little frail can do more than a male..." She can indeed.
As they say,"better late than never" Things have evolved slowly but steadily. Nowadays, women are present in every walk of life: army, industry, politics.

Back in 1943 women were seen as shorter, lighter and frailer than men; they were largely talented in child care, cooking, shopping and gardening. So it took SOME effort to accept that women had to learn to fix the family car, balance their household finances, drive trams and trains etc, until their husbands returned. It took even MORE effort to accept that women could learn to: be laboratory technicians, rig parachutes, fly military aircraft inside the country, become radio operators etc.

Hello Hels, I love the attitude and inner strengths shown differently in these three portraits. It was predictable that male-dominated society would to try to push women back into subservient roles once the war was over. But as another old war song went, "How are you going to keep them down on the farm, after they've seen Paree?" which turned out to equally true for men and women.
--Jim

I wrote about Rosie here:
https://todiscoverice.blogspot.com/2017/04/painting-of-month-71-may-2017-norman.html
It was an article about Norman Rockwell, whom I admire.

was it really predictable that male-dominated society would to try to push women back into subservient roles once the war was over? I was hoping to find that men whose wives and daughters learned new skills would be happy for their women to continue expanding their sense of financial and personal freedom. But clearly that didn't happen.

Eleanor Roosevelt was an impressive role model for women, wasn't she?

agree totally. All minorities (or majorities in the case of women) need brave individuals/groups to promote their causes. Mind you, during a world war is not the usual time to promote the rights of minorities.

Norman Rockwell created very accessible art, didn't he? I loved most of the examples you had in your blog post.

I am soooooo tired of men pushing women out of the way when they get threatened in any way at all . Its happened right through history. They usually sight issues around menstruation making us mentally feeble, emotional or unclean etc . The early church sidelined women from positions of leadership which they had had as early as the the 4 the century after the council of Nicea . Its just F.....ing pathetic . It would be interesting to find out why this has happened from a psychological perspective .
I suspect its because men know deep down that they are not as clever as we are :) so they have the need to keep us down so we never find out for ourselves. Well blokes the cat is out of the bag !!

thanks for reading the post, but I don't accept advertising.

it even took forever for women to get the vote, and that was after a long battle in most countries! But there is something about a catastrophe, especially a world war or pandemic, that makes leaders modify their normal thinking. I can imagine the defence industry directors sitting around a table saying "We are so short of men, should we train up women to do the work?" "Heaven help us Charlie, the women can make afternoon tea, and answer the phones, but no important work!" "I'm sorry Fred, we have no choice. But we will pay them half salaries so they go back home as soon as their husbands return".