The Chase School of Art opened to students in 1896 and two years later it became the New Yorker School of Art. New Yorker Norman Rockwell (1894-1978) enrolled in art classes at this school in 1908. Two years later, in 1910, he left high school to study art at The National Academy of Design and then The Art Stud­ents League. Thomas Fogarty and George Bridg­man were excellent teachers, preparing Rockwell for professional commissions. 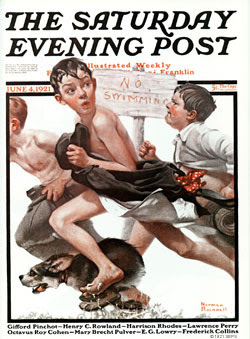 While still very young, Rockwell was hired as art director of Boys’ Life, the publication of the American Boy Scouts, and illustrated a range of young people’s publications.

In New Rochelle, Rockwell set up a studio with a cartoonist and produced work for such magazines as Life, Literary Digest and Coun­t­ry Gentleman. In 1916, 22-year-old Rockwell painted his first cov­er for The Saturday Evening Post, and for five decades, 321 Rockwell more covers appeared on the front of the Post.

The 1930s and 1940s were seen as the most creative decades of Rock­well’s career. In 1930 he married a school tea­ch­er. The couple and their three children moved to Arlington Verm­ont in 1939, and Rock­well’s work began to reflect small-town Amer­ican life.

During WW2, Rockwell put a nationalist and supportive view on daily life in America's home front, with famous paintings that appeared on the covers of The Saturday Evening Post. My favourites are those addressing the important roles that women could fulfill. See, for example, We Can Do It! 1942 and  Rosie the Riveter 1943. His simple way of capturing everyday life in his art was appealing. 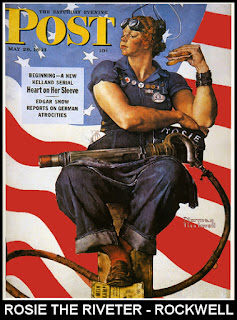 In 1953, the Rockwell family moved from Arlington Vermont to Stockbridge Ma. The question remained: how homey and sentimental were his small-town images, espec­ially in an era that required massive political commitment? Inspir­ed by President Franklin Roosevelt’s 1943 address to Cong­ress, Rockwell created his important Four Freedoms paintings. Four Sat­ur­day Evening Posts had essays by contemporary writers, along with Rock­well’s interp­ret­at­ions of Freedom of Speech, Freedom to Worship, Free­d­om from Want and Freed­om from Fear proved to be en­or­mously popular. The works toured the country in an exhibition that was jointly spons­ored by the Evening Post and the US Treasury Depart­ment, to raise millions for the war effort. 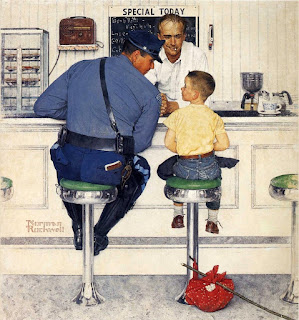 Runaway Boy 1958
being looked after by a friendly policeman

Although the Four Freedoms series was a great success, we don’t find much serious analysis of American life until Rockwell ended his 47-year association with The Saturday Evening Post in 1963. He began to work for Look magazine, specifically to allow himself more freedom in pursuing the art of serious social issues. During his 10-year association with Look magazine, Rockwell painted pictures illust­rat­ing some of his deepest concerns, including civil rights and America’s war on poverty.

However do note that in the midst of a racial deseg­reg­ation battle at an all-white New Orleans public school in Nov 1960, Rockwell painted a famous, civil-rights-inspired painting. I am very proud of The Problem We All Live With (1964).

Norman Rockwell created art in some 20 studios during his life, but it was the last one in Ma. that he loved the most and in which he lived the longest. This museum was founded in 1969 in Main St, Stockbridge in a build­ing known as the Old Corner House. In 1973, Rockwell established a Trust to preserve his artistic legacy by pl­acing his works in the custodianship of the Old Corner House Stock­bridge Historical Soc­iety, later to become Norman Rockwell Museum. The Trust now forms the core of the Museum’s permanent collections. As he became elderly, Rockwell became concerned about the future of his studio. He arranged to have his studio and its contents added to the Trust.

The museum moved to its current location 24 years later, opening in April 1993. The building on a 36-acre site overlook­ing the Housatonic River Valley was designed by Robert AM Stern. It was dedicated to the enjoyment and study of Rockwell’s work and his contributions to society, popular culture, and social commentary.

The Museum’s location is perfect; the artist loved the town, and it loved him back. Many of Rockwell’s best images were drawn from everyday locals he knew well eg family, friends and neighbours. 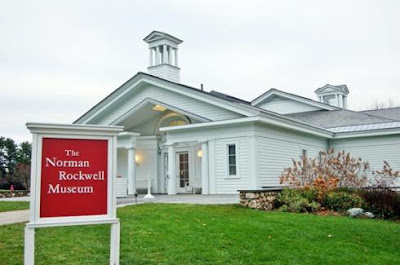 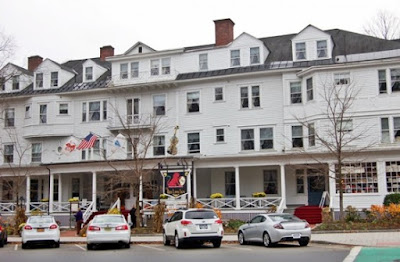 The lower level of the Norman Rockwell Museum has a dense exhibit dedicated to Rockwell’s 323 covers for The Saturday Evening Post over the 47 years he worked with them. Arranged chronolog­ic­ally, the framed covers fill the room’s walls. It is fascinating to watch how Rockwell’s style grew and changed over the years.


The New York Times says that for many years, the museum presented the studio as it was when Rockwell died in 1978. Now they’ve turned back the clock to October 1960, an active time in Rockwell’s career when he was hard at work on Golden Rule, the famous painting which later app­eared on the cover of the Saturday Evening Post. Working from highly detailed photos, the curators of the installation at the Norman Rockwell Museum applied great detail to their task, as Rockwell did to his. From his books to his radio, they’ve returned every aspect of the room back to 1960, to prov­ide some greater insight into the artist and his work.

In addition to 998 original paintings and draw­ings by Rockwell, the museum also houses the Norman Rockwell Archives, a collection of 100,000 various items, which include fan mail and business documents. Rockwell painted from photographs rather than real-life models, so his photographs are included in the Archives.

Rockwell’s Stockbridge studio, on the Museum site, is open to the public May-Oct, and features original art materials, library and furnishings. Stockbridge’s second greatest treasure is the historic Red Lion Inn which is redolent with rustic New England charm. Plus it is within walking distance of the Museum.

You may not believe this, Hel. Last year Kellogg's created a Cornflakes box with a Rockwell Father Christmas on one side. Kellogg's hoped that old-fashioned art would gladden Australians' holiday excitement. They may have also done that many years before, while the artist was still alive.

Hi Hels - thanks for this informative post about Norman Rockwell ... I'd love to visit the museum one day ... cheers Hilary

Hello Hels, I have always liked Norman Rockwell, although I know that some people complain of the sentimentality. However, I think that sentiment and wholesomeness are not bad attributes to have in art, as long as they are done well. (Thomas Kinkade is an example of sentiment gone to the extreme of schlock.) Art can, but doesn't have to incite extreme or negative emotions.
--Jim

It is interesting that Kellogg's thought that art from another century and from a different nation would do well here. But it was clearly popular. Perhaps it reminded my generation of their childhood in the post-WW2 era.

I hope you do visit the museum. Although I have visited Massachusetts a number of times, I would not have made a trip Stockbridge, had there not been this special attraction.

Rockwell was, beyond doubt, a very talented artist. And negative emotions in art would have turned viewers off his painting, not attracted them. So the question remains: was sentiment and wholesomeness enough? Did Rockwell take his delightful scenes from the small town locals he knew well, at the expense of a more in-depth analysis of his community?

On those grounds, we would reject my favourite artist in all the universe, Vermeer. He saw his task as depicting the interior of middle class lounge rooms, focusing on parents raising their children well, families dressing well, pianos, flowers, paintings and household staff.