In this blog, I've been fascinated with the explosion of top quality, long distance public transport systems in the later Victorian era eg Cairns-Kuranda Railway in Queensland.

In Tasmania, the Mt Lyell Mining and Railway Company also knew that a reliable, efficient transport system was crucial for large-scale, economic mining. Without a railway to cart in heavy mining equipment and to get its ore out to the seaboard for access to markets, the fledgling Mt Lyell mine would fail. The company clearly knew about the shortcomings of trails in the rugged landscape that had tested gold prospectors, surveyors and packhorse teams as far back as the early 1880s. 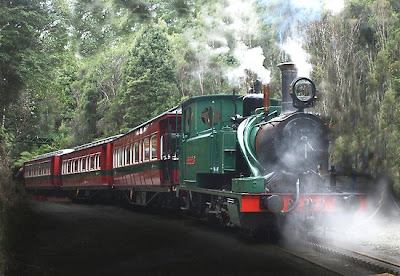 In 1892 the company posted a public notice, flagging its intention to build some sort of railway. But all attempts to secure investors to finance the company seemed to fail. British investors were the most probable investors, but they were wary in the face of the collapse of Australian banks in the mid 1890s and a downturn in the mining industry. And the situation didn’t change until the Company made an unexpected discovery of high grade silver. This seam yielded both sufficient silver and the necessary publicity to spark the revival of the Company's fortunes.

The contractors began recruiting labourers in late 1894. Locals, aware of the conditions and the harsh climate, wouldn’t touch the work with a barge pole. Instead outsiders were hired, but unfortunately the men who surveyed and built the railway risked their health and lives in the difficult, isolated conditions. Earthworks for the many deep cuttings were largely carried out by hand, with labourers moving thousands of cubic metres of rock and soil. The largest cuttings were very deep.

The climb to the summit was far steeper than any railway in Australia had tackled. Considering the impenetrable and unmapped territory, the harsh climate, the remote location and the need for a huge budget, no-one expected the service to get going. And indeed there were construction crises, scandals, rivalry and more financial problems. Yet first locomotive steamed into Queenstown for the railway's official opening in March 1897.

With the final link officially opened at the new Regatta Point station in 1899, the Mt Lyell Mining and Railway Co Ltd went on over the next decade to become Australia's largest mine. The railway, built against the odds, was earning its keep. And the original railway continued to operate for 67 years, despite natural disasters such as bushfires, catastrophic floods, broken bridges and a world flu epidemic. For those who lived in scattered bush settlements along its route and in Queenstown, the railway was a communication lifeline.

The popularity of the railway continued, even with the 1932 opening of the first road out of Queenstown that linked the Lyell community to Hobart. But by 1963 the railway closed and the Mt Lyell Mining and Railway Co. Ltd became a company with a railway in name only. 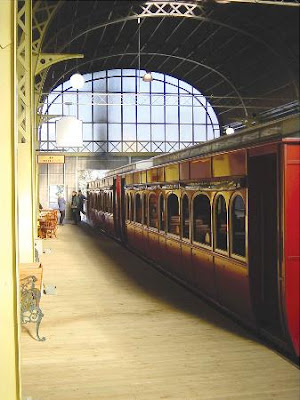 A private company eventually acquired the railway but when restoration work began in early 2000, supported by $20.45 million from the Federation Fund, little of the original railway remained. In three years the restoration team rebuilt original steam and diesel locomotives, completed 40 reconstructed bridges, made exact replicas of original carriages with hardwood panelling and clerestory roofs, and re-created stations. The West Coast Wilderness Railway's full service between Queenstown and Strahan opened in Dec 2002. They have since bought Strahan Village accommodation and Gordon River Cruises.

From the glassed-in rear doors with balcony, the view is spectacular as the train passes over bridges high above the rivers below, through massive hand-hewed rock cuttings, under the canopies of ancient rain forests and along the edge of plunging gorges. Clearly the West Coast Wilderness Railway continues to memorialise the resourcefulness, endurance and frontier spirit that developed Tasmanian’s west coast. Visitors can see the impact of early pioneers who tamed this very wild country. 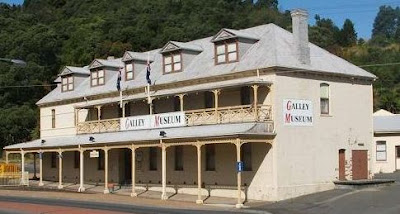 The round trip leaves Strahan at 10.15 am every day, arriving in Queenstown at 2.30pm; at 3.00pm the coach leaves Queenstown, arriving back in Strahan at 4.00pm. A lunch stop in the heart of the dense forest at Dubbil Barril allows passengers to wander along forest paths and discover remote creeks running down to the King River and see first hand the beauty of the majestic Tasmanian wilderness rainforest. At Lower Landing, passengers can taste Tasmania's special leatherwood honey, from the rainforest hives of the Tasmanian Honey Company. Fettlers' lunches and afternoon teas are available on board the train.

The rebuilt Queenstown Station is modelled on the original building with its high, curved roof. It features a café, retail store and information centre resembling a railway carriage. The Eric Thomas Galley Museum in Queenstown features memorabilia and extensive photographic displays of West Coast history and a range of interesting literature about those famous decades.

A very useful book by Lou Rae is called The Mount Lyell Mining and Railway Co, a pictorial history 1893-1993, Ulverstone, 1993. The author concluded that restoring the railway showed long forgotten aspects of our mining and railway heritage, along with the lifestyles of the isolated West Coast mining communities. Australians are now gradually beginning to realise that there is far more to national heritage than convicts and sandstone buildings.

Note Strahan and Queenstown on the west coast of Tasmania

Fascinating. Like say the Panama canal these railways projects were amazing and the efforts involved don't seem to much recognised today so a great post.

And not just in building the railway itself. Australia For Everyone talks about the families who were moved into Mt Lyell Mining and Railway Company towns, only to become ghost towns once they had outlived their usefulness - East Pillinger, Linda and Gormanston. http://www.australiaforeveryone.com.au/places_towns_gh.htm

Workers were the core to success in all these late Victorian and Edwardian building projects, but they don't seem to have been protected from death and disease.

In building the Canadian-Pacific Railway during the 1880s, for example, it is estimated that up to 2,200 labourers died from scurvy, being frozen in the snow or by catastrophic falls.

I have heard of the train and I am sure I will get to travel on it one day. I understood, and I could well be wrong, that the train has some assistance uphill at some point. The Queenstown Station looks most excellent.

In reference to your last post, I didn't find our local station in London, Paddo, particularly nice, whereas St Pancras was fantastic. I must have just been renovated as the Eurostar had not long started to run from there.

some slopes were so steep that the project must have been an engineering nightmare.

Visit My Tasmania said that with inclines as steep as 1 in 16, the engine uses a steam driven cogwheel which engages with the twin toothed rack rail which runs down the centre of the line. This rack and pinion system allows the engine to pull the train up the steep hills. 1 in 16? Is that possible?

You make me ache to be in Tasmania, or, at least, Australia, whence I could make the journey.
When I was young I rode on a cog train up the side of a mountain in Switzerland. The hills were steep enough to ski down very fast.

In fact I've just remembered that the hills were so steep that the seats had to be angled so that you would not slip out of them when riding in the carriage.

you must come and visit, esp in summer (Dec-March) when Tasmania is at its loveliest. You have not missed a lot of restored history - the West Coast Wilderness Railway's full service didn't open until Dec 2002.

How I miss the charm of these old trains... the sound they made and their compartments...
But I am glad about progress as well, and the opportunities to use more public transport.
Thanks for the History Lesson:)
Hope all is good with you!

Kristin
good to see you.

Because I didn't have much interest in Victorian trains and railways myself, I wasn't aware of all the work that has gone into redeveloping the service for modern travellers.

Now I am totally amazed at what is out there!

I recommend you pay the extra for the Premier's carriage as you will thoroughly enjoy the experience. Our porter was attentive and we enjoyed the service, food, drink and scenery. This trip is the one to choose for the spectacular scenery.

Anon
thanks for that. I imagine the scenery is just as spectacular, whichever level of service you prefer. The difference lies in the extras - lunch, afternoon tea, wines, a guide on tap, a reference book etc

Hi, I loved this work in this page, you are helping web people with great knowledge! This web page is much enlightening!
I´m Vera, I´m from Berlin, and I will be a fan of this web page.

I wrote this comment because as I already mentioned I really enjoy this page I also have a web community just like you, but mine is vey different from yours.

Are you coming to Australia in general and Tasmania in particular?

Railroad Australia, on Discovery Channel, had excellent footage on the West Coast Wilderness Railway. It was shown in Australia on Saturday 17th December 2016.