The Story of Icehotel tells that Yngve Bergqvist did not want to spend the rest of his life working for a big mining company in Kiruna Lapland, Sweden's north­ern city. Berg­qvist was an outdoorsman so he took up river-raf­t­ing. One day tourists asked him for a ride on the river and suddenly Berg­qvist was in business; then he went to the tourist office on week­ends to find clients. He grad­ually ex­pan­d­ed the rafting business to 40 summer employees and 30 boats. 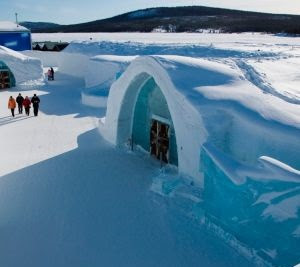 Front entrance Icehotel
Jukkasjävi
But summer in Sweden was short; there was no rafting on the frozen winter river. Bergqvist needed a winter business to supp­le­ment his summer earnings. He knew of Japanese tourists visiting Alaska in winter to see the Northern Lights, so in 1988 he travelled to Japan for the Snow Festivals. There he met a Japanese ice sculpt­or and they planned a winter ice-sculpting workshop in North Sweden.
Before the Jukkasjärvi workshop opened, it was 7c and raining. What would happen to the ice? The owners decided to let it be destroyed and they could make something new afterwards. What was new was the ICE-HOTEL, which would have a seasonally-defined lifespan. Us­ing the ice-sculpting skills Bergqvist had learnt, the hotel was made each wint­er using ice from the majestic Torne River. 200 km north of the Arc­t­ic Circle.
The Swedish tourist board introduced Berg­qvist to Sakata, owner of the Japanese travel agency, Northern Express. A natural partner­ship grew where Sakata generated interest in Japan for travel to Sweden, and Bergqvist provided Sakata’s clients with a unique ex­perience in Swedish Lapland eg ice fish­ing, marrying in an ice chapel.

Jukkasjärvi, a historic marketplace, was where the midnight sun gl­owed during summer and didn’t rise above the horizon during 2 weeks in winter; where there was snow 8 months each year and the Aurora Borealis lit up the night sky; and where 900 residents lived.

In 1989 the 250 square meter igloo Artic Hall opened, a gallery with art created from ice and snow. On a cold winter day, all the warm cabins were booked for the night. Another group wanted to sleep in the cold Artic Hall, in warm sleeping bags. The morning after, IceHotel was born. Today it accommodates c100 people, with a new appearance every year since the first art exhibition in 1989.

Ever since, Icehotel has been an ephemeral ex­hibition to explore art by introducing creative individuals to ice and snow. The owners had to col­lect the most innovative and ground-breaking ideas from around the world, bring them to Jukkasjärvi and give them the material, tech­niques and tools to transform the ideas into actual hotel suites. When the temperature dropped in mid-Nov, the building pro­cess began. The snow was sprayed on huge inverted curve-shaped steel forms and allowed to freeze. After a few days, the forms were removed, leaving free-standing corridors of snow-ice, the main con­struction material for floors, walls and ceilings. Dividing walls went up and created suites. 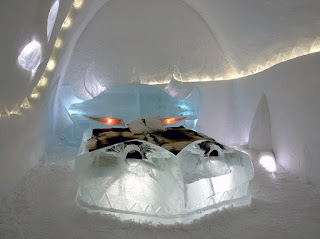 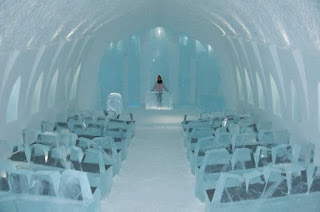 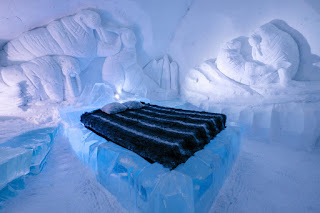 A bedroom suite, Hotel de Glace Quebec
to compare the artwork with Sweden's

As well as ice sculptors, the makers of Icehotel were graphic desig­ners, architects, industrial engineers and artists. In spring, the sun melted artwork and The Creative Board made an open call for de­sign proposals for next winter. The best concepts received an invit­at­ion to the two-week art sym­pos­ium, to create the suites in person. Out of 120-150 proposals, 15-20 were accepted and invited to come to Jukkasjärvi to build their de­s­ign. The panel tried to have a bal­anc­ed represent­at­ion of sex, age, nationality and experience. Some art­ists were local; others travelled from Asia or South America and had never seen snow before.

Moulds created the shape, but the material was strong enough to stand alone and after a few days, the moul­ds were removed. The corridors and rooms were constructed in a clas­sic, curved arch shape, which was self-supporting and very strong. Thus the entire hotel was made out of snow and ice blocks. 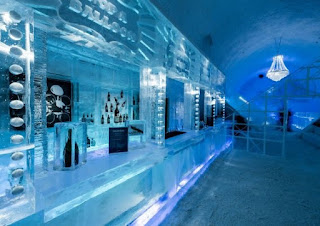 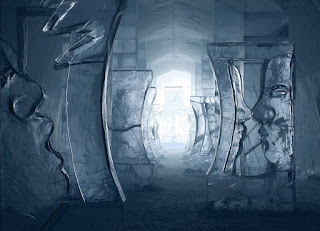 Main hall with ice-art
Each artist submit­ted ideas, then a jury chose 50 art­ists to create the facilities: the hotel itself, chapel, Absolut Ice Bar, re­ception area, ice-art main hall, cinema and suites for 100+ guests to sit and sleep on ice-chairs and ice-beds. When the artists arr­ived they could get started immediately, turning their sketches into real­ity - a 6-week period of intense activity! The river had changed shape and had been trans­for­m­ed into art.

Visitors were given special winter clothing to use during the stay: thermal suit, thermal boots, fleece-lined hat and over-gloves. The lighting design was the last part, and as most of the art work was transparent, light added an important dimension. A team of light designers worked closely with the creators of each room in the hotel to ensure the lightning made the art work exhilarating.

This winter resort expanded in 2016 with the opening of Icehotel365, run on solar power to stay –5c all year. To create a total experience for visitors, the owners planned adventure and culinary events in-house or in partnership with others. In Nov 2021, the 32nd version of the Icehotel will be built. 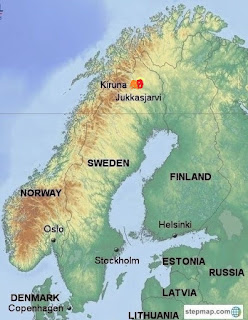 Note Kiruna and Jukkasjärvi
in Northern Sweden
Thank you to Icehotel for the images.
Posted by Hels at 24.6.21

The hotel suggested we stayed only one night in the ice room, to see the art in detail. Then to move to the chalets. The art was truly amazing!

I think that is wise... after all, if you love the ice room, you can always book a longer stay in it. And as long as the hotel continues to provide the thermal sleeping bags and the reindeer hides to go over the bed base, most guests will do very well.

I am assuming architects in Dubai aren't called on very often to design ice hotels :)
Have you been in the ice hotels in North Sweden?

Fantastic story! An ice hotel and exhibition of exhibits made of ice and snow! ice hotel with rooms and restaurants. A "co production" of swedish and japanese enterprise!

Hello Hels, University of Minnesota professor Karal Ann Marling wrote a book called Ice which discussed ice palaces and buildings among many other aspects of this substance. Her inimitable writing style is at once both erudite and amusing.
--Jim

People go to hotels all their lives and after a while, one hotel starts to look like the next. But the idea of an icehotel is totally different and quite exciting for most of us. Hotel guests are invited to walk through all the cold rooms wherever they are sleeping that night, so we can think of the building as a private art gallery.

Where you when I needed you, researching this topic about which I knew nothing???? I had never heard of ice facilities ... perhaps beyond Canadian hockey rinks.

Thanks for the reference which I can add to the post.

I am not sure I would cope well either... I don't even like getting into bed in a singlet.
But that is the great joy and surprise for people from warm or hot countries .

It sounds an exciting adventure. Maybe one day. Who knows what the future holds for us these days?

By the way the book Parnassus recommended was "Ice: Great Moments in the History of Hard, Cold Water (2008) written by Dr Karal Ann Marling.

Truly amazing but perhaps not for me. I think about the practicalities of getting up in the early hours of the morning for a trip to the bathroom or if my Scotch will freeze when I put it down on a table.

I hope global warming has been taken into account for future planning.

global warming is discussed in all the community planning pages for resources but NEVER, as far as I can see, for this icehotel in Jukkasjärvi. I presume that if the geographic location of the icehotel cannot be moved further north, then the winter dates of opening for this hotel will have to narrow.

By the way, other countries saw the original icehotel and were impressed. Since then similar icehotels have opened in Canada, Finland, Norway and Japan.

This is a real story from the periphery of the world! I once attended a wedding in Paris where some ice sculptures were displayed. I was spellbound by them and had to enquire why they didn't melt. I think it was something to do with the use of dry ice (solid carbon dioxide).

of course you were spellbound by the sculptures made from ice - even for all of us familiar with paintings, bronzes, ivories, gold and silver, porcelain, jewels, textiles etc etc, we may never in all our lives have seen ice art.

Now I wonder why I had never heard of other icehotels in the world, until having a good look at North Sweden last year. What happened to the advertising from Norway, Finland, Switzerland, Romania and Canada?

It looks like a fun experience. Although perhaps not a place to stay for for a longer holiday adventure.

agreed. I liked the recommendation that tourists should spend one night in an iceroom and the rest of the stay in a warm, traditional hotel room. This gives tourists enough time to enjoy the ice art in one evening, and to join the wilderness excursions on the other days.