The difference between deserving & undeserving families in Britain was est­ab­lished in the Poor Law 1834. The deserving poor were hard workers who were struggling through no fault of their own. So they des­er­ved state help. The undeserving poor were lazy and not try­ing hard enough to relieve their own hardship, so didn’t deserve help. Parliament­ar­ians believed charity increased dependence and that the good-for-nothing poor needed to be motivated into working! 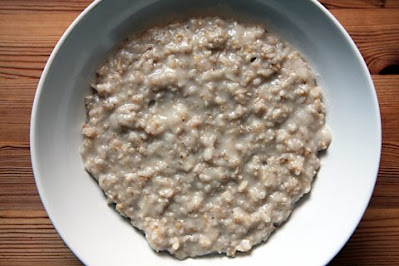 Hunger had to be reframed as a social issue, and starving children were an even more symp­athetic cause for change. When compulsory educ­at­ion started (1870s), thousands of poor ch­ildren went to school hungry. Proponents of feed­ing these children pointed out that it was due to government mand­ate that children were not working and contrib­uting to the fam­ily food budget. Thus the govern­ment should pay. Opp­onents said that it was not the government’s responsibility to comp­ensate for poor parenting.

To improve public health, excellent new British legislation ensured clean water, sewage disposal, decent housing and compul­s­ory educat­ion. But despite great efforts, this was not enough to en­sure a healthy population. In fact the armed forces had been shock­ed by the physical health of the young men when they were trying to recruit for the Boer War 1899-1902. A third of volunteers had to be rejected on health grounds, often due to sub-standard diets.

War caused change! A Committee on Physical Deterioration was set up eg working against cholera. But nothing helped with nutrition. A quarter of London residents did not have enough money to eat well, even those with permanent jobs.

Poverty became more worrying. Social reformers Seebohm Rowntree and Charles Booth did research showing that c30% of York’s work­ing class families in 1901 found that wages were often too low to en­sure a dec­ent standard of living. Medical care cost money and parents might not call a doctor for their children. Thankfully some charities offered cheap meals for school children eg Sal­va­tion Army. 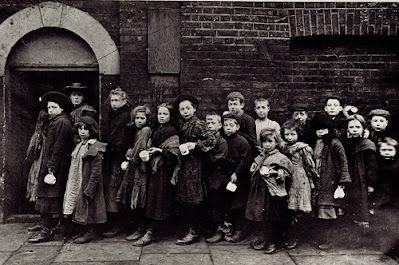 Children queued up for breakfast with their mugs,
outside Salvation Army c1900
Food partnership
Early in the C20th, the Labour Government asked schools to provide pupils with hot lunches. Then the new Liberal Gov­ern­ment, elected 1906, passed new measures to deal with ch­il­dren’s health. School Medical Exam­in­at­ions provided treatment in sch­ools at three points in their school­ life, covering physical, mental and dental well­being, and clean­liness. And they ordered schools to of­fer meals to all pupils via the Educat­ion Provision of Meals Act of 1906. This free hot meal was likely breakfast: porridge, bread with dripping and a glass of milk. Bradford was the first Council to provide free school lunch to children: Scotch Barley Broth was served to White Abbey Methodist School students in 1907, the food being cooked at the nearby Green Lane School.

New arguments started: how was eligibility determined? How could the government encourage take-up, when children eating free school meals would be stigmatised by “normal” children? What did a nut­rit­ionally balanced meal look like?

Compulsory notification of all births to a medical officer came in 1915. Then council houses came after WW1. The UK was the pride of the entire British Empire!! [The free school milk programme wasn't int­ro­duced by Australia’s Menzies Government until post-WW2, but no food at all!]

From 1921 on, criteria were set showing which children were able to have school lunches eg mutton stew and treacle pudding. However the Act again was not implemented by most local author­it­ies. A survey from 1936 found that in the Local Ed­ucation Author­it­ies where unemployment was above 25%, few out of a school-age population of half a million were receiving free school meals. 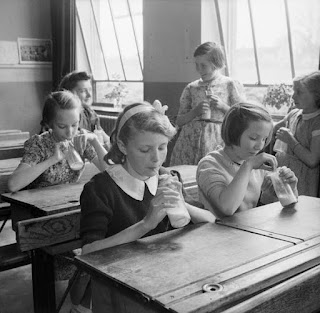 School children drinking free milk, 1944.
The Conversation
Not until late in WW2 were laws passed which ordered all local au­th­orities to provide free, nutritious meals in schools. Part of the war effort on the home-front was to maintain morale, not ach­iev­­ab­le on an empty stomach. But national food rationing cont­inued into the 1950s. So tinned meats were popular due to their staying power, with mash. As the economy recovered, baby boomers ate corned beef or fish and chips, in canteens nationwide. Spotted dick and rice pudding with jam for afters.
The arrival of the Welfare State after WW2 meant welfare was intro­d­uced as a right: all workers would contribute and all in need would be­nefit. Thank­fully after the tragedy of WW2, the National Health Ser­vice offer­ed security from cradle to grave.

Fear arose about increasing government support in working fam­ilies’ lives, 1970s right wingers called it the Nanny State. Educ­ation Sec­re­tary Margaret Thatcher outrageously stop­ped free milk for the over-7s in 1971. Then in 1980, her Conservative Govern­ment totally ended the provis­ion of free milk. A new Education Act was introduced which halted the minimum nutrition requirement for school meals, so local education authorities only had to ensure the provision of food for chil­d­ren whose parents received income support. Worse still Thatcher encouraged the privatisation of the school meals services; the Competitive Tend­er­ing Act allowed private companies to bid to provide school meals. Now there were no min­im­um standards. Private contractors endeavoured to put food on the school dinner table at low­er costs - sugary, fatty fast foods like pizza, chips and chicken nuggets, and high-sugar drinks.

The 1986 Social Security Act cut the number of children eligible for free school meals, just as unemployment and inflation were rising. Agg­ressive advertising and inadequate invest­ment in the health and nutrition of children con­t­in­ued to have negat­ive imp­ac­ts on health and school achievement, especially in low-income families. 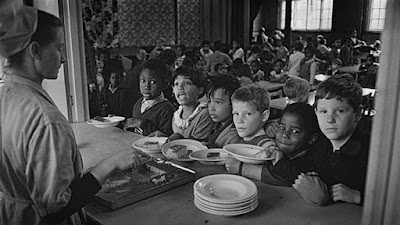 School children received their meal
from the canteen lady
To read about free lunches for British school children since 1990, find History and Policy and Iris.
Posted by Hels at 25.6.21

Australia's school milk scheme provided milk in special one-third pint bottles to school children across the country. The free programme only lasted from 1951 until 1974.

A footnote to this excellent post is that since Sept 2014 all children in Reception, year 1 and year 2 receive free school meals in the UK. There are still many families below the poverty line and rather than means testing it was decided to provide all children with at least one hot meal a day. Schools are also obliged to provide breakfast provision for pupils. This is not free for all children. It is hard to believe that in a G7 country we still have children going hungry.

I remember the nation-wide Milk for School Children Programme very well. And I also remember that Queensland rejected the milk because of their tropical climate up-north. There were no school fridges back then, I am assuming.

Now I wonder if our parents were ever given the option of free food at school.

I do remember that, yes

The BBC said that in 2014 all state-funded schools in England had a legal duty to offer free meals for all children up to Year 2. I wonder if the programme opened as widely and promptly as promised, that the meal was hot, that the funding was adequate and that all young children were included or just those from impoverished families. And what about outside England?

I know that much that the notions 'welfare state', 'free meals','birth control', 'demographics' are now in the focus, being blamed for leading to a new and dangerous form of social parasitism.

Scotland also provides free school dinners for the same age group as England but is extending it to include older children in primary. Scotland's aim is that all primary children will eventually receive a free meal at lunchtime. Wales provide free breakfasts but not lunch unless parents are entitled to claim that benefit as they are on a very low income. In Northern Ireland only those on benefits can claim free school meals. The programme did start as promised and as far as I am aware without any problems. A hot meal must always be offered to children.

As Doris Lessing said if free school meals and welfare are offered they will be taken but before they were offered everybody reached out in the community and all looked after each other. In her view the welfare state destroyed that. It is in her autobiography if you dont no believe me describing when she lived in 1950s London, Walking in the Shade. She also lamented the coming of television in the '50s, an end to conversation and socialising in the rooms she lived in with her son, a single parent.

Hello Hels, I'm sure that a very similar tale could be told of American school lunches. What is absolutely dumbfounding is that once a program is in place, that there could be people mean enough to want to eliminate what is the essence of life for these children. In my elementary school were were dismissed for lunch; there wasn't even a lunchroom at the school. Your article made me think of my middle school, which likewise had no food but was not within walking distance of home. I realized that I have absolutely no memory of middle school lunches, although when I was young I didn't eat during the early part of the day.
--Jim

Hels says you cannot have a moral nation unless the government pays for (via taxation presumably) all the services that only the rich can afford to pay for - public health care, universal education, social housing etc etc. Imagine a first world nation forcing beggars to sit in the streets in order to beg for food money.

Thank you for the uptodate information. It may not be a totally even situation across the country, but the commitment is clear. I wonder if Covid is increasing the need for food programs.

Hels acknowledges Lessing's views and said there were many others who shared them. But the welfare state didn't destroy the plan for communities to look after each other. After all the churches and charities had long run poor houses etc. What the welfare state did was provide services to those families who weren't being supported by anyone.

your experience seems to be very widespread amongst the people who have written to us, even in wealthy countries. So the provision of services to hungry children has little to do with adequate government resources, and everything to do with the mean-spiritedness of comfortable families and politicians.

It was clear in 1906 that not all the foods were nutritious and of good quality. But the program was experimental and progressive, and way better than what went before. The shame is that in 2021 you are still saying the same thing about Brazil's public schools.

when I cannot type, I ask one of the students to give my responses. I can trust them totally :)

One minor correction (I think!): It reads as if the first UK Labour Government preceded the 1906 Liberal one. The first Labour government, under Ramsay Mac Donald was in 1924.
The UK government has just announced a 9pm watershed for ads aimed at children for high fat and sugar containing foods. We have Europe's highest obesity rate, which, considering USA cultural hegemony here, is not surprising.
I really do back the idea of state intervention in public health. It makes economic sense at the very least. The notion of a 'nanny state' is harmful to this idea.
CLICK HERE for Bazza’s naturally naughty Blog ‘To Discover Ice’

The fear of state intervention in public health became bitterly visible by extreme right wingers during the Covid pandemic.