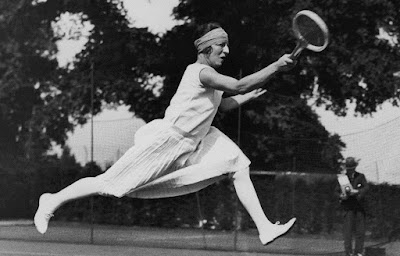 Lenglen leapt across the tennis court with grace
Suzanne Lenglen (1899-1938) was born in Paris. As an asthmatic, young Suzanne took up sport because father  Charles wanted to make her st­rong­er. Papa soon recognised his daughter's tennis talent so he taught her to attack the net and play with aggression, just like a man.
At 14 Lenglen was winning tournaments. She gracefully leapt around the court, playing with powerful serves, timely smashes and well-placed volleys. Lenglen refused to com­pete if she did­n't like the way she looked and she cried if she didn't meet her own exacting stand­ards. Really?

Lenglen made her Wimbledon debut in 1919, which had resumed after the 4-years of WW1. Just 20, she first made a flam­boyant fash­ion state­ment. She turned heads with her daring, one-piece cotton dress that bared her fore­arms and was cut above the calf!! She was glamorous, dramatic and moody, a fascinating champion.

In the Wimbledon finals, 20-year-old Lenglen faced 40-year-old Dor­ot­h­ea Chamb­ers, 7-time defending champion. Note that Chambers was staid and traditional; Lenglen was reb­ellious and trend-setting eg unlike most of the other women, Len­g­l­en served over­handed! In con­t­roversial change ­overs, papa Char­les tossed her a vial that she con­s­umed, revital­is­ing her play. With King George V and Queen Mary watching, Leng­len defeated Chamb­ers in 3 great sets, the first non-Anglo Saxon to win Wimbledon. 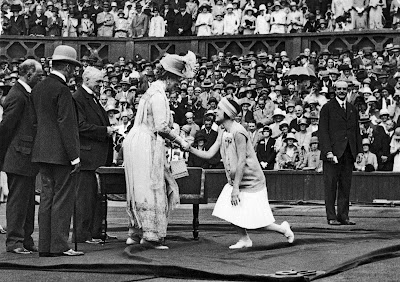 This launched one of the great runs in tennis. Lenglen won 5 of the next 6 Wimbledons. In 1920 she won her first French Open, then took that title 5 more times. And she was just as dominant in doubles.

If WW1 slowed Lenglen's rise to stardom, it clearly helped to boost her popular­ity. After the massive casualties in the war, Fran­ce need­ed a symbol of national pride. It came in Notre Suzanne! By the late 1920s, Lenglen was more famous than any other public figure in Europe.

And Lenglen personified tennis's contribution to the Roaring 20s’ Jazz Age. She arrived in a fur coat, played in full makeup and had a chic, coloured silk wrapped around her hair. France's top des­ig­ners competed to provide her out­fits and Vogue displayed her outfit. And this A-list international celebrity travelled in chauffeured cars!

The French media acted as Lenglen’s personal press agency. If a brave jour­nalist did publish something any­thing un­flat­tering about the Goddess, he was quickly ridic­uled as an enemy of Suzanne Lenglen, of sport and of France. 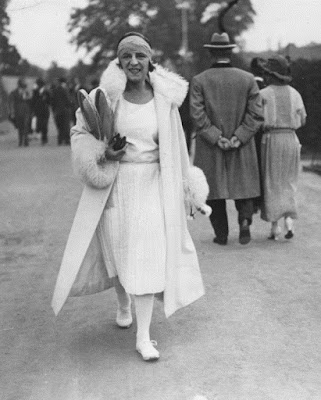 Lenglen arrived to the tennis
in fur coat, silk hair piece and chic white dress
In Feb 1926 Lenglen played her most crucial match at the French Champ­ionsh­ips. As tennis thriv­ed on rivalry, Len­glen had an ideal foil in Helen Wills, a 20-year-old who had al­ready won 3 U.S titles. Both ent­ered a tournament at the Carl­ton Club in Cannes. When it was likely Leng­len and Wills would meet in the fin­al, the match be­came the International Match of the Century. And Lenglen won.

Lenglen never travelled to the Australian Championships in her entire career. And only once to the U.S, as an amateur. In 1921 she played at Forest Hills NY, but when they explained that drinking alcohol viol­at­ed Federal Prohibition laws, Leng­len threatened to go home. Nat­ur­al­ly tourn­ament officials capitulated! Alas the 1921 U.S Tournament was a failure; Lenglen left after losing to U.S star Molla Mallory

The fans saw Lenglen as the box office attract­ion at the French and Wimbledon Championships. On Roland Garros’ red clay and Wimbledon’s green grass, the French woman filled the stands with her flamboyant play and personality. In Sports Illustrated (Sept 1982), they profiled her: “The Lady in the White Silk Dress, Suzanne Leng­len, drank, swore, had lovers by the score and played tennis incomparably.”

Decades before the division between ten­n­is' prof­ess­ional and amateur divisions ended, Lenglen pointed out that only a weal­thy person could compete. Was that fair? In 1926 Lenglen be­came the first woman to turn professional. Getting paid meant that Lenglen could no longer enter Wimbledon, which was open only to amat­eurs. In the first women’s pro­fessional series, the French star acc­ept­ed $50,000 from American pro­moter Charles Pyle to tour America, playing against Mary Browne. Lenglen defeated the three-time U.S champion in all 38 matches.

Lenglen retired from tennis at 28 and retreated to her Nice villa. Papa died in 1929 and soon Suzanne returned to Paris, working in a sporting goods establish­ment. Th­ere she invented above-the-knee shorts for women. But although Lenglen was free from the press­ures of celeb­rity and relent­less travel, she was having health issues, acute app­endicitis, ?leuk­aemia and died in 1938 from pern­icious anaemia.

Why did it take until 1978 for the greatest ever female tennis player to posthumously enter the International Tennis Hall of Fame? Did Fr­ance not approve of their champion becoming their first-ever prof­ess­ional women’s tennis player, interested in money more than French glory? 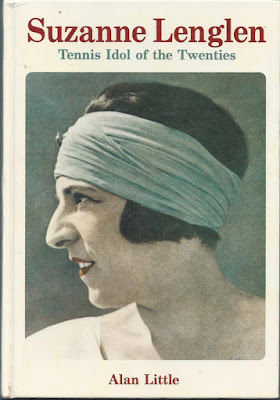 Poor Suzanne. She was taught to play powerfully like a man yet she cried like a little girl over her appearance. Women must have paid a great price for success in the 1920s.

She was quite a character! I'm impressed by her contribution to tennis, to fashion, to recognition of female capabilities.

That reminds me that the opposite was also true. Remember the Pride of Australia in 1956, Dawn Fraser, the greatest female swimmer in the world! She took no notice of the fashion and makeup writers and paid a great price as well. Everyone valued her sporting genius but thought she lacked femininity. All things considered, Suzanne Lenglen probably had the easier time of the two women.

WW1 delayed Suzanne Leng­l­en’s first international appearance until 1919 and then her life ended at a tragically early stage in 1938. If she wasn't such a brilliant player and such a classy dresser, she would not have been known today.

I am still angry that she wasn't honoured in the International Tennis Hall of Fame for another 40 years.

Hi Hels ... an interesting read ... at she's remembered. I guess another woman coached and controlled by a man, her father. The International Tennis Hall of Fame was the US Hall of Fame ... that could have had something to do with her not being recognised for so long. All the best - Hilary

I have no doubt that Suzanne was a naturally gifted athlete and her dad was a serious coach, but the pressure on the young woman must have been intense. It reminds me of Jelena Dokic with her serious but dominating father-coach Damir.

Hello Hels, We are quick to berate coaching fathers and stage mothers. Although some did get out of hand, without them we would be minus many great athletes and performers. So many early people of accomplishment have sadly been forgotten by time--I am glad that Lenglen's life has been revisited and her story finally told.
--Jim

I agree that women sportswomen were very fortunate back then if they had proper a coach, father or not. But Charles Lenglen, a very enthusiastic coach, went further than that. He sold his business and concentrated full time on his uber-rigorous training regime, yelled at her over minor mistakes and both parents criticised their daughter publicly.

Thus it was not a surprise that Suzanne was the finest tennis player of her era, but one who burst into tears easily.. and often. I only wish she had a sibling or spouse for comfort.