From the 1820s on, rapid development in NSW's Hunter region saw the growth of trade and commerce on the Hunter River. This development also in­c­reas­ed the population in Morpeth, 37 ks north of Newcastle, a very busy port on the Hunter River. Mor­peth was the stop-off point for settlers heading into the interior and the embarkation point for goods being sent to New­castle, Sydney and on. 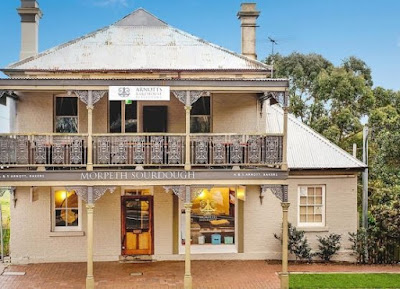 Arnotts bakery in Morpeth
Opened 1847
An important trade, cultural, commer­c­ial and religious centre, it became a bustling town filled with sailors, bul­l­ockies and hotels; bond stores and salesmen; free sett­l­ers and con­vict workers; dairy farmers and railway men. In 1847, Scot­tish immigrant William Arnott op­ened a bakery in Morp­eth. Later Mr Arnott moved to a bakery on Hunter St Newcastle, making biscuits and pies for townspeople and ships docking at the local port. Arnott was/is still the most famous biscuit brand in this nation. 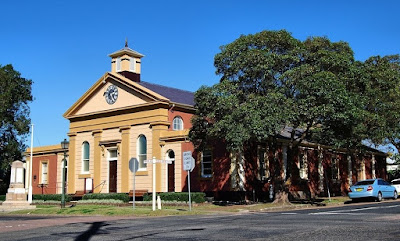 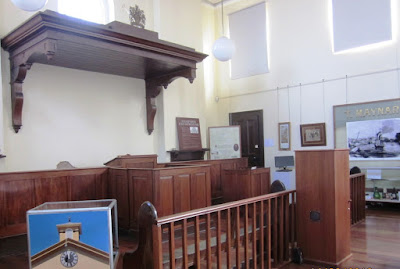 Magistrate's bench
in Morpeth's courthouse
In time, the need for Morpeth’s court house as a symbol of au­thority grew. Bet­ween the 1820s and 1850s, local magistrates ass­igned to Mor­peth gen­er­ally used private or rented dwellings to hold court sess­ions. And the Court of Petty sess­ions was often held in private dwellings.

Although there were 2 important court­houses 20 ks away, this little river town felt it des­erv­ed hon­our by the er­ection of its own centre for law & order. In 1858, the Government recognised a need for a per­manent court house. After some delay, Edward Close, a Morp­eth land owner since 1822 and previously a magis­t­rate in the area, took responsibility for the building. With Edward Day, Police Super­int­en­dent for the Maitland area, Edward Close petit­ioned the Colon­ial Secret­ary to urge the Dept of Public Works to speed up the process.

Architect Mortimer Lewis Jnr, son of the former colonial archit­ect, wanted to get the building up and operat­ional. Approp­riat­e­ly Close donated a plot land for the court house.

The final plans comprised a large courtroom with 2 wings, a police station and magistrates on one side and the Telegraph and Post Office on the other. Tenders were called and in Sept 1861 an East Maitland builder was contracted to build the court­house, to be com­pleted in 9 months. Morpeth Court House, central­ly located on the corner of Swan & Nor­th­­umberland Sts, was in the classical Greek Revival Style. It opened in 1862. The Court Room still displays the coat of arms over the original judge’s can­opy.
The building was used as a court­house and civ­ic centre from 1862-1942, until Morpeth’s importance as a comm­er­cial river port declined and there was less need for its services. Later the building was used as a recruitment office during WW2 and a Red Cross station.

After WW2, the building con­tin­ued to be used by the local community: public meetings, craft and art classes, Red Cross meetings and an em­er­gency food distribution centre. The National Emerg­en­cy Services used it to hold first aid practice and training. In July 1954 the main room of the court house was opened as a branch of Mait­land City Lib­rary. Later the front 2 rooms of the east wing opened as a Baby Health Centre.

In 1965, Maitland City Council applied to resume the land and have the court house designated as a place of historical significance. The Council finally owned the land by Apr 1968 and used a stylised image of the roof line, bell tower and clock as the organisational logo for many years. In 1970 Morpeth Progress Ass­ociation and the Library Com­m­ittee began discussions about a section of Morpeth branch library bec­oming a local folk museum. The library was moved to the east wing and continued to work there for decades. I know Morpeth had a small popul­ation, but what happened to reduce and finally close the library?

Morpeth Museum’s task was to explore the Hunter region's rich heritage, collecting, preserving and interpreting the history for future generations. It is represented in the courthouse with permanent and temporary displays, together with the gallery of The Morpeth River Boats photographs and models. The Mait­land City Council ensured the building underwent extensive restor­ation over 3 years and is once again the focal point of Morpeth. 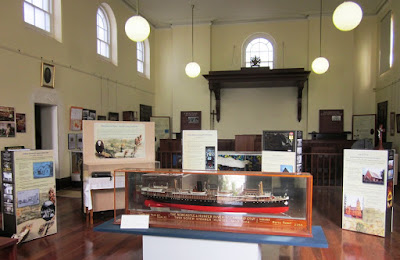 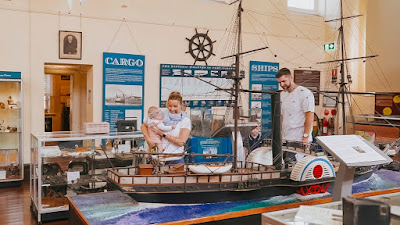 Exhibitions range from early and family histories which can be resear­ched, to specific indust­r­ies, lectures, heritage walks and morning teas. The exhibitions are ever-chang­ing as new and interesting hist­or­ical elements are discovered or restored. The railway, housing and working industries draw in many viewers. After a long Covid break, Morpeth Museum reopened with the launch of a new exhibition. Loc­al artist Holly McNamee said she used her own memories of growing up in Maitland to draw on.
Today the Morpeth Court House-cum-Museum is heritage listed. The museum is featured in the Morpeth Her­itage Walk, along with other iconic buildings which reflect the history of the town. Read Ann Beaumont’s Morpeth Courthouse: a place of justice, a place of community for the history of the town itself. 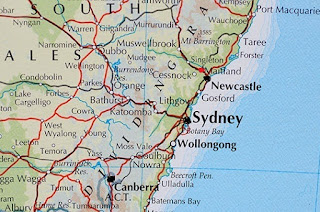 In this morning's SMH they were talking about reimagining important 19th century buildings in Sydney, rather than destroying them and wasting all those precious resources building something new. How much more so in small rural towns.

Hello Hels, The Morpeth Courthouse certainly has had a layered history, and I am glad of its current appropriate use as a museum. With its fancy ironwork it almost looks like something out of New Orleans. It is interesting to know the early history of the Arnott company. I love their cheese crackers, but currently in Taiwan unfortunately you can only get their sweet cookies.
--Jim

I was thrilled from the unexpected memories. Arnott's itself says the Tim Tam can never be defeated as the most iconic Aussie biscuit because it’s so damn delicious. The classic Tim Tam will go down in history as the best Aussie biscuit creation. Agreed!

I found the article, thank you. So many historically important buildings were destroyed in the name of modernity that we will never again have the memory of the past in our vision and we will never be able to keep that history alive. Of course we can look at 19th century photos, but it isn't the same.

Unlike Morpeth Bendigo is a large rural city, but I remember how important it was to maintain the gold-rush architecture, stunning post office and law courts, churches and synagogue etc.

When I was thinking about preserving 19th century fire stations in London, it was clear to me that even though the external architecture needed to be carefully preserved, it largely didn't matter what the building was used for inside. So if Morpheth courthouse becomes a technical training college, public library, Red Cross Centre or baby health centre, each use should be recognised by a plaque.

Yes...architectural taste and decorative preferences can travel the world very quickly! I have not visited New Orleans, but I would recognise an architectural school straight away and know where the taste came from eg Romanesque, Gothic, Baroque, Art Nouveau, Bauhaus etc etc

I had no idea that William Arnott first op­ened a bakery in Morp­eth, so I am delighted Arnott's bakery in Morpeth (1847) is still in place. And yes, it was such an important company in our post-war decades. Do you remember the Iced Vo Vo where the biscuit was covered with pink fondant, a strip of raspberry jam and a sprinkling of coconut :)

Where there's a river there's life and progress: a port, goods coming in and going out, hotels, institutions (law court) etc..Even the name of the town Morpeth , sounds promising.
I like the story and picture of Arnott's bakery. A tasty biscuit is something to savor and remember.

Agreed. Cities, towns and rural regions' economies change when something huge happens outside their control eg Central Victoria (Aus) became mega wealthy when masses of gold deposits were dug up from 1850 on. The populations increased greatly, the architecture was stunning and the transport system became amazing. Until the gold ran out! In Newcastle Upon Tyne (UK), the teeming industrialisation only went down when the last coal pit closed in c1960 and the booming shipyards disappeared in the 1970s, 1980s and 1990s.

I suppose life in those cities had to move more to banking and insurance, computers and technology, tourism, culture etc, if they were smart.

Thanks for your response your post are really amezing History Den

It is not an area I know much about, having never visited, but I know a little more now. I am pleased the court house is being well utilised and maintained.

thank you. Are you interested in British colonial architecture of the 19th century? Where can people leave a comment on your posts?

that part of Australia was important in mid 19th century, and although Newcastle is still important, the surrounding small towns have faded. So preserving the history, architecture and treasures of Morpeth has become even more important.

me too. I have been along the Wollongong-Sydney-Newcastle road many times and know the three cities well. But I had never heard of Morpeth until accidentally reading of the town in My Maitland. Learning can come from all sorts of odd places :)

I didn't know about Morpeth. I did know an Arnott descendent, however, and when he was a kid in Sydney, the family members still had their biscuits delivered from the Sydney factory every week by the red Arnott's van. His granny used to order her Sao biscuits "well done", so they'd cook her batch specially.

I love it when bloggers have a personal connection with the topic, even if it is as remote as our grandparents' experiences. Books are wonderful, but there is nothing like you knowing an Arnott descendent or my beloved swapping Tim Tams in primary school in Sydney.

The architecture is interesting, the bakery in particular.

colonial Victorian architecture in Australia (for those with money) was beautiful, both residential and commercial. Double storey, freestanding, open and plain façade, terraced with cast iron lacework and corrugated iron roof. I love it still.