The land where the Fairmont Royal York Hotel sits was already a historically important part of Toronto. A respected lake-boat captain, Thomas Dick, build four brick houses on the Ontario Terrace site in 1843. Knox Theological College acq­uired the row houses and in 1853 renovated the struct­ures thoroughly. Then the Theol­ogical College called the build­ing The Revere Hotel in 1860. 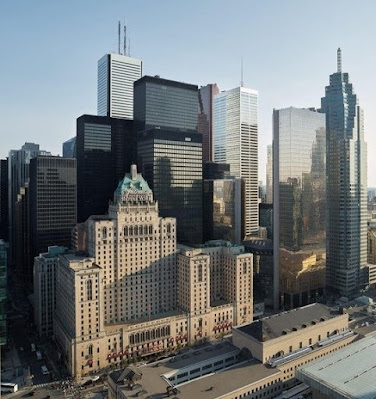 The Hotel on Front St. 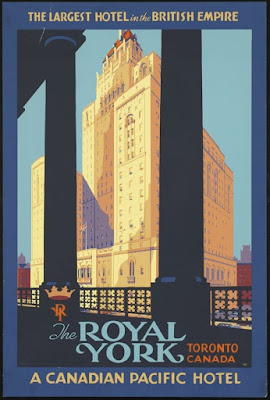 Advertising poster when the hotel
opened in 1929
Capt Dick later bought back the hotel, giv­ing it a new ren­ovation and name, Queen’s Hotel on Front St. The prestigious Queen’s Hotel be­c­ame an iconic part of the city, hosting prom­in­ent guests like the Prince of Wales. But when the Canadian Pacific Railway bought the Queen’s Hotel in 1925, its presid­ent demolished it to const­ruct the largest, most grandiose hotel in the British Empire. Thus the new hot­el with its 28 floors of towering arch­it­ecture was built. It took 2 years to com­plete, opening as the Royal York Hotel in June 1929, just before the Depression.

Located in Toronto’s Financial Dist­rict, the hotel quickly set the hospitality standard of the day, each of the 1,048 guest rooms having its own bath. The 1.5 acres of public rooms included a 12-bed hospital, 12,000-book library and ornate passenger elevators. The Concert Hall featured a full stage and mammoth pipe organ. There was a glass-enclosed roof garden, the largest hotel kitchen in Can­ada with a huge bakery, a 66’ long switchboard and 35 teleph­one oper­at­ors, its own bank and St George Golf Course.

On opening night, the Royal York hosted four grand balls where guests dined and danced all night. The Imperial Room was the city’s newest and most elegant din­ing and dancing establishment. It defined the Tor­onto social scene as the site for high society funct­ions and big band shows. Canadian Pacific Royal York Radio Station began to broadcast in 1930, live from the Imperial Room for several years.

Through a history of 90 years, the Toronto hotel has played host to royal guests, heads of state and celebrities. King George VI and Queen (Mother) Elizabeth arrived at the Royal York Hotel on their royal tour of Canada in 1939, to bolster the UK and Canada’s cultural ties. Whenever Queen Elizabeth II visits Toronto, an entire floor of the hotel is reserved for her and her staff.

The hotel has also served foreign dignitaries, diplomats and heads of state, including the Presidents of U.S and France. And dig­nitaries like the 14th Dalai Lama. 11 heads of state stayed at the hotel during the 2010 G20 Toronto summit.

Its use for musical purposes signalled its future as one of the most prestigious nightclubs in Canada. This was not unusual - the larg­est hotels in Canada had series of orchestras which, by the 1950s, were used as show bands to accompany individual perform­ers.

As soon as WW2 ended, Moxie Whitley and his house orchestra began playing inside the Imperial Room. Whitley also booked many of the famous acts that premiered at the Imperial Room like Duke Ellington and Count Basie. Its headlining acts then included stars like Peggy Lee, Ella Fitzgerald and Bob Hope. Actress Ginger Rog­ers performed a solo show at the Imp­erial Room after she broke up with her partner, Fred Astaire. Others included Eartha Kitt, Louis Armstrong and Tina Turner.

Imperial Room was a major events venue with a 500-seat cap­ac­ity, wrap-around floor-to-ceiling windows and permanent stage, Toronto’s nightclub/supper club hotspot. From the 1950s-80s, the Imperial Room nightly shows continued while dinner was served on silver platters. It was a decadent and glitzy. 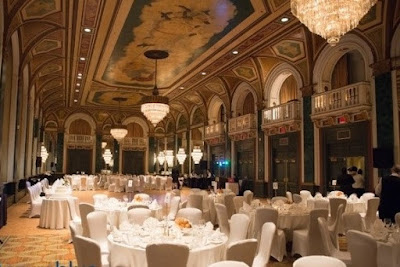 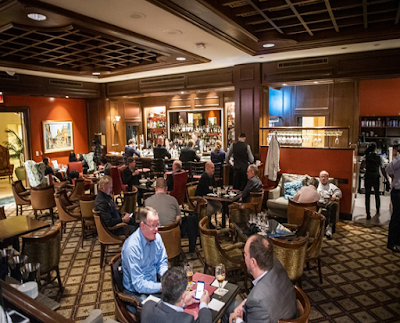 Library Bar, from blogTo
Emulating a comfy house library, books have been here for decades, stacked on shelves.
Changes continued. In 1957 a new architectural firm led the design team which developed a marvellous eastern wing of accommodations. In 1972 a renovation added a wealth of new architectural features on the building. Craftsmen also rein­vig­orated the historical architect­ure of the hot­el’s renowned façade in 1988: the upper portion of the hotel had a copper roof and ornate Chateau Style architectural det­ailing. And Romanesque arches above the windows with Corinthian plasters inserted between the windows. Can­adian Pacific Ltd formed Fairmont Hotels and Resorts in 2001 through a reorganisation of its subsid­iary, Canadian Pacific Hotels. The Royal York was subsequently renamed the Fairmont Royal York.
The Fairmont Royal York served as a host hotel for the Toronto Inter­national Film Festival, making it a popular to stay for residence for those working in the film indus­try on near­by film and tv sets. Hollywood filmed scenes at a different loc­ation from where the story actually took place. Toronto became a Holly­wood hot­spot for film and tv productions. And the Fair­mont Royal York Hotel was the most filmed location in the city: c20 film proj­ects were shot there every year. The hotel stood in for an American Hotel in 2001’s Serendipity starring Kate Beck­insale and John Cusack. And The Kennedys (2011).

Conclusion  Toronto has many historic buildings mixed in elegantly with its newer architecture. This large city is one of the most historically div­erse cities, so when vis­iting the diff­erent cult­ur­es, include this towering hotel. Photo credits: City of Toronto Archiv­es
Posted by Hels at 6.3.21

My relatives in Toronto took me to the Library Bar for a birthday treat. The food was yum and the atmosphere was amazing.

*nod* It is a bit embarrassing that we love an expensive, decadent and royalty-focused hotel with its attractive facilities. But when I consider how lucky the Fairmont Royal York Hotel was, to survive largely intact since the 1920s, we should be very grateful.

As soon as Covid's dangers end, we should all go to a lovely place like the Fairmont Royal York, and just enjoy ourselves!!

I didn't remember the Library Bar myself, so I am very grateful for your comment and for your relatives' birthday surprise. See the photo I added to the post.

We absolutely love staying in hotels, not necessarily those as grand as the Fairmont Royal Oak Hotel, but ones where one is guaranteed impeccable service and an old fashioned understanding of style.

Should we ever visit Toronto, then this hotel would surely be on the top of our list. We can see immediately the effortless charm of the place. So much unchanged since the 1920s but yet it all has a distinctly contemporary feel. Chic and stylish, it really oozes comfort from every corner. How we should love to sink into an armchair and just watch the guests gliding by.

We have often thought that when we really cannot cope with the demands of modern living any more [any day now!!:):)] we shall sell up everything and move into a suite in a grand hotel. Emerging from our room for meals and excursions, that would be our idea of bliss.

Hello Hels, When I was in Cleveland I was not so far from Toronto, but I never made it to tour such elegant spots as this hotel. Most of my visits to Canada were fishing or otherwise outdoor trips, so a tent or lake cabin was a more likely accommodation.
--Jim

It is a very grand hotel and it was not particularly expensive accommodation when we stayed there a few years ago. I knew some of its history.

When my late parents moved into a care home, they had a wonderful social life but they lived in a boring physical environment inside and no open gardens.

So if moving into a suite in a grand hotel won't cost you much more than a care home, it WILL offer you decorative beauty, garden space and top class entertainment.

I had no idea you had been a fishing, camping sort of bloke. But then I have been to Canada many times for family reunions, and never stayed in an elegant hotel either. In Winnipeg and Vancouver, we stayed with cousins. In other cities we stayed in youth hostels, except for Friday nights in clean, proper hotels!

If Covid ever ends, our next trips will include elegant accommodation.

I am delighted when fellow bloggers have been to the places we discuss on line, especially since you enjoyed yourselves. But I still cannot find out if the Fairmont York Royal Hotel has heritage protection from National Trust Canada, or not. I hope it does.

This hotel sounds right up my alley! How wonderful it has withstood the changing times and fashions. We've not travelled to Canada yet but feel sure that at some point in our lives, the occasion will arise and this marvellous and iconic nod to a sophisticated (and ambitious!) past has to go onto The List.

During my occasional perusal of old newspapers when looking for Interesting Stuffs, I often come across old advertisements for Canada's railway companies, which promised invigorating views, pleasant accommodations and the tacitly-understood reassurances of travel within the Commonwealth, so I rather expect that those Australians with the wherewithal to travel internationally in the 20s and 30s would have been quite familiar with this Toronto landmark.

large continents really need good quality, affordable train services, agreed. I have been on many Canadian trains, but the only long trip I did was The Rocky Mountaineer which went from Vancouver and for some travellers, continued till Toronto. It was fantastic.

We have cousins in Vancouver, Winnipeg, Ottawa, Toronto, Oakville and St Katherines. So our problem is that when we go to Canada, they get awfully offended if we don't stay with them! So Grand Hotels are out unless want to go to Montreal or Banff.
CLICK HERE for Bazza’s partially pendulous Blog ‘To Discover Ice’

that is absolutely true for families who left the motherland after WW2. Joe was much loved by his uncles and aunt in New York, Jerusalem, Tel Aviv and Manchester, so we always stayed in their warm homes. My mum's first cousins emigrated before WW2 and had very close connections only with that older generation. My parents happily stayed with them in Winnipeg, London and Tel Aviv but I was only invited for meals and parties.

Sadly my children don't even know the surnames of their distant cousins :(