From 1963-66 inclusive, my closest friends outside school were South African teens of my own age. Their brave parents had made the dec­is­ion to leave the country of their birth, a beautiful land filled with safari holidays, national parks, exotic animals and flowers,  beaches and amazing cities. It must have been a tough decision since my friends’ parents had no siblings or friends in Australia, no promised jobs and they were not allowed to bring their savings with them. But as apart­heid in South Africa became worse, a few anti-apartheid citizens felt they could not stay in their beloved homeland any longer.
Sharpeville and Johnnesburg, South Africa 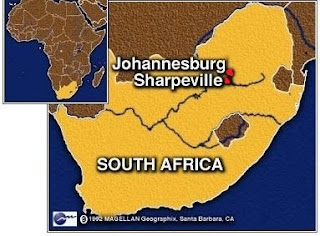 What was the mid C20th history of apartheid in South Africa? I recommend and thank Britannica, Human Rights Canada  and The Conversation.
The Hert­zog Government achieved a major goal in 1931 when the British Parliam­ent passed the Westminster Statute, which removed the last remainders of British legal authority over South Africa. Racial seg­reg­­ation, sanctioned by law, was widely practised there be­fore, but the National Party gained office in 1948 and extended the pol­icy, giving it a formal name. Apartheid (i.e apart­ness in Af­rik­aans) was a policy that governed relations be­tween the nation’s White min­or­ity and non-White major­ity; it sanc­t­ioned racial segreg­at­ion, and pol­itical & economic discrimination, ag­ainst non-Whites. The implement­ation of apartheid was made possible by the Pop­ul­ation Regist­rat­ion Act of 1950, which classified all South Africans as Bantu (Blacks), Coloured (mixed race) or White. Later a fourth category was added: Asian (Indian and Pakistani).

The Group Areas Act of 1950 established urban residential and business sect­ions for each race, and members of other races were bar­red from living, operating businesses or owning land there. In prac­tice this Act completed a process that had begun with similar Land Acts adopted much earlier; the end result was to set aside 80+% of South Africa’s land for the White minority. To help enforce the seg­reg­ation of the races and limit Blacks from go­ing into White areas, the government st­rengthened the existing Pass Laws that req­u­ired non-Whites to car­ry documents authorising their presence in restricted areas. Other laws forbade most social contacts between the races, au­thorised seg­regated public facilities, estab­lish­ed separate educat­ion­al standards, rest­ric­ted jobs according to race, limited non-White lab­our unions, and denied non-White participation in government.

Under the Bantu Authorities Act 1951 the government re-created tribal organisations for Black Africans, and the Promotion of Bantu Self-Gov­ernment Act of 1959 created 10 Bantu­stans i.e Black homelands. Later on the Bantu Homelands Citizenship Act made every Black South Af­ric­an, irrespective of actual residence, a citizen of one of the Bantust­ans, thereby excluding Blacks from the South African body pol­itic. 4 of the Bantustans were granted indep­end­ence as repub­lics, and the rem­aining had varying degrees of self-government; but all re­mained politically and econom­ic­ally dep­en­dent on South Af­rica. 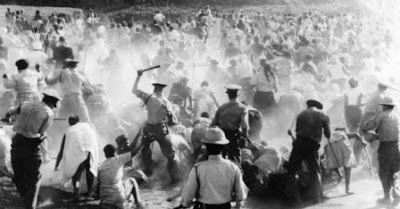 Bullets in the back and clubs on the head continued
at the Sharpeville anti-apartheid demonstration, 1960
Getty Images 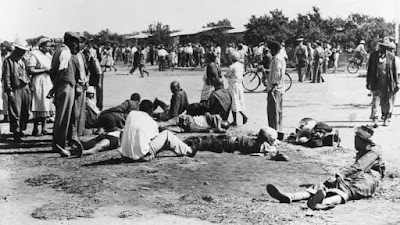 The wounded lay on the ground after the dead bodies had been removed
in Sharpeville, 1960.
Britannica
The Pan-Africanist Congress/PAC created in 1959. In Mar 1960, the PAC organised a country­wide dem­onstration regarding the abolition of South Africa’s Pass Laws. Many thousands of Blacks gathered near a police station at Sharpeville, c50 km south of Johannesburg, instructed to surrender their Passes and to invite arrest. After the demons­trations began, the police violently opened fire with sub­-machine guns and sten guns ; c69 Blacks were kil­led and 180+ wounded, including 50 women and children. A state of emergency was decl­ar­ed in South Africa, 11,000+ people were detained, and the PAC and ANC were out­lawed. 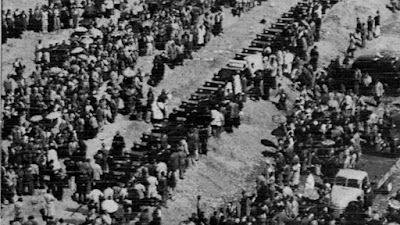 The mass burials that followed the Sharpeville Massacre
msn news
Reports helped focus inter­nat­ional crit­icism on the nation’s apart­heid policy. South Africa was forced to withdraw from the British Commonwealth in 1961 when it became clear that other British count­ries found ap­artheid abhorrent. In response to the resulting internat­ional economic san­­ct­ions, South Africa's government abolished the Pass Laws in 1986, although Blacks were still prohibited from liv­ing in some White areas and the police won broad emerg­ency powers.

A new constitution enfranch­is­ing Blacks and other racial groups was not adopted until 1993 and took effect in 1994. All-race national el­ec­t­ions in 1994 produced a coalition gov­ernment with a Black majority led by anti-apartheid hero Nelson Man­­dela, the coun­try’s first Black president. Yet even after apartheid formally ended, racism continued.

How appropriate that following the dis­mant­l­ing of apartheid, President Nel­son Mandela chose Sh­arpeville as the site for signing the coun­try’s new constitution into law in 1996.

Conclusion 3.5+ million Black South Africans had forced to live on arbitrary reservations called Bantustans, depriving them of political power and proper incomes. Yet amongst the many oppressive conditions in the nation, it was the Sharpeville Massacre in 1960 that horrified anti-apartheid supporters and caused them to go into exile.

I remember Sharpeville, but I didn't truly appreciate the details until later, when the South Africans came to Australia by the thousands.

Hello Hels, When I was in college, apartheid was a big issue, and many people were protesting to have the school remove pro-apartheid investments from its portfolio. That was also about the time people were scrutinizing mutual funds and the like, and the idea of virtue-based investing (anti-pollution, anti-apartheid, pro-feminist, pro-gay, pro-minorities, etc.) started to take hold.
--Jim

Maybe it is an anniversary of some kind as I listened to a podcast about the massacre a few days ago. While now all South Africans are equal and I can't see anything like that happening again, it is still a country with a monstrous wealth gap.

Over the years I have had some acquaintances with Black South Africans and the effect of these awful times on them has been profound. When we think abut our own aboriginal people it seems tome that we should feel the same shame that white south Africans should feel for their past . I am not at all sure that it was good for Australia to welcome these people after all they didn't want to stay and build a new country . I wonder why that might be ??? :(

peoples' memories of Sharpeville 1960 depended largely on whether the family had a tv by 1960 or not. Newspapers and radios were excellent for news, but only tv left vivid images on our brains.

By the way, it is interesting that Sydney has more South Africans than Perth or Melbourne.

I am assuming that you were in college quite a long time ago! Nonetheless it still shocks me that many people had to work hard and loud to have the school remove pro-apartheid investments from its portfolio! How slowly we all move :(

the anniversary was March 2020, 60 years after the Sharpeville Massacre. I assume the memorial ceremony was delayed because of Covid.

But we need to remember an earlier anniversary memorial (March 1985). On Sharpeville's 25th anniversary, police opened fire on a crowd of people gathered in Langa township. The crowd had been at a funeral of one the six who had just been slain by the apartheid police. They were heading towards the funeral house when the police blocked the road with tanks and ordered the crowd to disperse. When the crowd stayed, police shot at the crowd, killing 35 people and wounded dozens in this, the Langa massacre.

Good on you for mentioning that! The White Australia Policy had been in place until 1973 when the Whitlam Labour government ended that offensive policy forever. But there had been no positive policy of multiculturalism in Australia after 1960, at the very time when anti-Apartheid South Africans had to go into exile.

How ironic; anti-Apartheid whites in South Africa HAD to leave and were warmly welcomed into Australia BECAUSE they were white!

Hi Hels - there have been massacres in South Africa and which are still going on. I've got some documentation from the Soweto riots that occurred just before I arrived in South Africa, as a naive English woman. Publications including The Drum magazine with some information from the Sharpeville and Soweto era. It's a very complicated history ... all the best - Hilary

*nod* it was unbelievably tragic, for the families who were murdered and for the rest of the black South African community who learned very quickly the type of rule they lived under.

The tragedies certainly continued. In June 1976, 20,000 black Soweto school children took part in protests and when the police stopped shooting, 700+ children were dead.

The 1985 Langa massacre I already mentioned. Black crowds were heading towards a funeral house when the police blocked the road with guns and shot into the crowd, killing 35 people and wounded dozens.

I didn't know, or didn't remember that you had lived in South Africa. The closest _I_ ever got was having close South African friends in Melbourne and then living in an Israeli hospital where spouse and I were the only non-South Africans in residence.

And thanks for the reference to Drum Magazine. It will be very valuable reading.

Thank you for writing this Hels. It's a testament to how negligent the Apartheid education system was that the first I heard of this massacre was in my first year of university when we woke up on 21 March 1991 to white crosses erected all over the lawns on east and west campus of Wits University. We were still under Apartheid in 1991 but many struggle cadres were at Wits and it was an awakening to me. Throughout that first year I would learn all about what we hadn't been taught. You mention above about having a TV in 1960. My mother only arrived in SA from France in 1961 at age 9, so she did not know of the massacre but she lived through 16 June 1976 and taught me about that (even though we were in England at the time).

If it wasn't for my South African friends who moved to Melbourne in the early 1960s, I also would not have heard of Sharpeville until decades later. In Australia knew about massacres and crises in Vietnam, USA, Soviet Union, Hungary etc... but South Africa's apartheid secrets seemed closed to international press. Worse still, the military secrecy meant banks continued to lend money, the oil tankers kept arriving and expensive weapons systems remained in abundant supply.

The shock is that South Africans were prevented from knowing what happened, and were prevented from becoming involved, from 1960 until the government changed in the early 1990s. It reminds me of Germans citizens never having heard about the extermination camps until 1945.

That book looks fascinating. My primary area of study was the violence in South Africa at that time and I think this book will shed a lot of light on that.