The exhibition will chart the course of the late-C19th art movement, highlighting the key milestones and figures at the centre of their era of experimentation. This 2021 Melbourne Winter Masterpieces Exhibition will evoke the energy and intellectual dyn­am­ism of the period. And it will emphasise the thinking of the artists them­selves, revealing the social connect­ions, artistic influences and per­sonal relationships that united these radicals.

Boston’s MFA is an institution well known for its collection of French Impres­s­ion­ist paintings. The collection bene­fited from the collecting ef­f­orts of individual Bostonians, some of whom visited the artists in France back then. Mary Cassatt, the American-born art­ist integral to the French Impress­ion­ist movement, ad­voc­at­ed among her fellow Americ­ans for their patronage of her French col­l­eagues. This ensur­ed that many great Im­pressionist paintings found their way into important American coll­ect­ions. Thank you Boston! 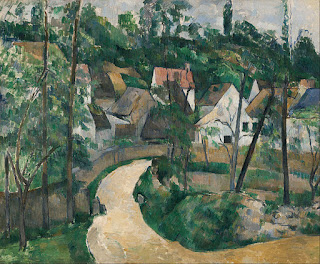 Turn in the Road, c1880, by Cezanne
Museum of Fine Arts Boston.
Presented thematically in 10 sections, the exhibition will open with early works by Impressionism’s forebears, Eugène Boudin and painters of the Barbizon School, illustrating their intense influence on Mon­et’s use of painting outdoors en plein air, to capture changing conditions. The growth of the movement in lat­er decades will be mapped via an explor­ation of the Imp­ression­ists’ favourite subjects and ideas. French Imp­ressionism will amplify some of the key elements eg vis­ible, distinctive strokes, vib­rant colours and new perspectives.

For viewers not very familiar with imp­ress­ionism, this will be a very welcome place of discovery. The word impres­s­ion back in the late C19th was a rapid notation of an effect of weather, giving a quick look at the world around them. Their quick painting did not need to be taken home and polished up in the studio; it was some­thing that had merit in and of itself. Visitors will delight in the beauty of these vividly coloured paintings, which still appeal 120+ years after they were created.

Visitors will experience the key elements of Impressionism, including dist­in­ctive brushwork, unique points of view, arresting use of colour, in places dear to the artists eg Paris, Argenteuil, Fontainebleau For­est, Giverny, the Normandy coast and Med­it­er­ran­ean coast. Still lifes, intimate interiors and outdoor street scenes by such artists as Manet, Renoir and Gustave Caillebotte will also feature. 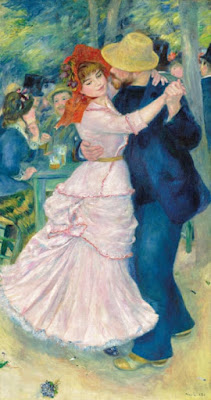 Dance at Bougival, 1883, by Renoir.
Museum of Fine Arts Boston. 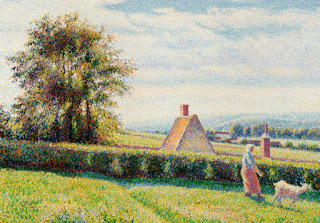 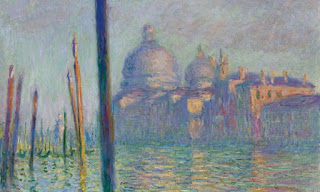 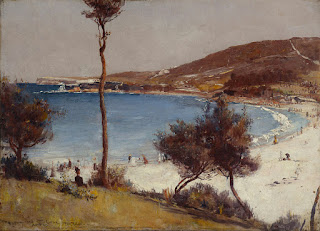 Holiday at Coogee Beach, 1888, by Tom Roberts.
Art Gallery NSW
The highlight will be a fine display of 16 canvases by Claude Monet, in an arrangement reminiscent of the distinct­ive, oval gallery design­ed for his famous 1920s garden series at the Musée de l’Orang­erie Paris. The exhibition will contain both Renoir’s Dance at Boug­ival and Monet’s Water Lilies 1905. These art works are among the most iconic images of French Imp­res­sion­ism, epit­omising what is most loved about the movement: radiant colour, irid­escent light eff­ects, impass­ioned response to the beauty of nature.

MFA Boston’s curator Katie Hanson’s personal favour­ite painting (but not mine) is Manet’s Street Singer (1862), a portrait of a woman in a grey dress walking out of a cafe, holding a guitar and cherries. She says it captures that modern, inscrutable mystery of glimpsing a com­pelling stranger on the street, highlighted by her hand covering her mouth. Does it remind the viewer of the current pandemic?

Running concurrently with French Impressionism will be a companion show-case of Australian impressionists, called Titled She-Oak and Sun­light (April-Aug 2021). This show will feature 270+ works from local artists including Tom Rob­erts, Ar­thur Streeton, Fred­erick McCub­bin, Charles Conder, Clara South­ern and Jane Sutherland, drawn from the NGV’s collection as well as the National Gallery of Australia, state galleries and priv­ate collections. She-Oak and Sunlight was named after a Tom Roberts painting. The works will explore the relat­ion­ships and inter­nat­ional influences behind Australia’s most recognis­able and important art movement.

Highlights include McCubbin’s The Pioneer and Roberts’ well-known Shearing the Rams (1890) which depicts sheep shearers plying their trade in a timber shearing shed, and A Break Away! And see Clara Southern’s An Old Bee Farm Warrandyte c1900, a nostalgic vision of the landscape, painted in a soft palette of twilight tones. Following conservation treatment, vis­it­ors may be able to appreciate the newly restored colours of Arthur Streeton’s Hawk­esbury River 1896 and in Purple Noon’s Transparent Might, 1896.

The exhibition will also display lesser-known paintings by Iso Rae, May Vale, Jane Price and Ina Greg­ory, plus more widely recognisable works by John Russell and E Phillips Fox. It charts the creative exchanges between the move­ment’s leading figures in Australia, by pre­senting artworks in meaningful groups. The exhib­it­ion will also consider the broader global context, personal relat­ion­ships and artistic interactions of Australian Impres­sionists and those work­ing internationally, jux­ta­posing Australian works with those by Claude Monet, Alfred Sisley, James Whistler and others.

Impressionism became an international movement. So there’s some­thing really informative about seeing different takes on a similar sub­ject matter or on a similar mode of working. Iso Rae studied along­side McCubbin and after she moved to France won int­er­­national acclaim, exhibiting regularly at the Paris Salon. Rae’s style in Young Girl, Etaples (c1892) is French, but per­haps her Aust­ral­ian heritage shows in her interest in the play of int­ense light and shad­ow: technique, palette and subject matter.
Posted by Hels at 2.3.21

Hi Hels - this sounds like it will be an exceptional exhibition ... I do hope many can enjoy the works of art on display. I'm going to come back and look at your list of Australian Impressionist artists - the Tom Roberts' one is delightful. I sincerely hope life will allow many keen members and visitors to get to the musuem - excellent to see ... thanks for the write up. All the best - Hilary

The NGV is an excellent gallery with a very fine permanent collection, as are the galleries in Canberra, Sydney etc. But once a year we have the Melbourne Winter Masterpieces Exhibition so that people who cannot travel overseas (including during Covid) can still see the best that the rest of the world has to offer. With a single theme each year, it is always described as a blockbuster!

I really like Whistler's paintings, but he was neither French nor Australian. What was his connection to this exhibition?

Hello Hels, Today we consider the Impressionists so magical that it seems incredible that they were once reviled. Australia is lucky to get this fine show--I wonder about some of the mechanics of it, such as transporting so many iconic paintings all at once. I used to work for a short time in the Boston Museum of Fine Arts, but in the musical instrument department, and I was kept so busy that I never got to see the entire museum, and missed most of its wonders. I do remember some of the Monet waterlilies in the area that contained the executive offices. Still, working with the MFA's amazing instrument collection was a good trade-off for being kept so busy.
--Jim

It sounds like an excellent exhibition. I long to get back into the art galleries.

We know Australian Impressionists were influenced by artists working overseas, including James Whistler. I have no doubt that Whistler’s Mother 1871 was well received here and was looked at very carefully by our artists. The NGV recommended that we examine The Young Mother’ 1891 by John Longstaff, for example.

you never cease to amaze me :) I love the idea of knowing someone who worked at Boston's Museum of Fine Arts. But it doesn't matter how busy they kept you; all workers MUST be allowed to go on a half hour guided tour of the rest of the MFA every week. The tour guides are already working with outside visitors and would be pleased to have intelligent workers added in.

Selecting, insuring, transporting and installing art works from a range of overseas galleries is always a major issue, so normally the NGV would plan it several years in advance. And of course Covid made it much worse. So they cancelled 2020's Winter Masterpieces altogether, and in 2021, limited the donor galleries to just one.

agreed! Most people with active brains read, watched tv and used the computer during the long, miserable lockdown. But there is nothing like going out, meeting other people and challenging the brain with new questions to stay mentally alert. Nothing does that better than museums, art galleries and the Tennis Open.

Thanks for reading the post. Who were your favourite impressionists?

This will be a wonderful and uplifting exhibition. Just what everyone needs right now! Of course, we have an embarrassment of galleries in London BUT they won't be re-opening until 17th May so I'm a bit envious. Of all the movements in art within the last few hundred years (and possibly ever) Impressionism seems to have lasting and widespread appeal. As you state, it didn't have instant appeal with the critics as do most new movements. It takes revolutionary and visionary artists to move things beyond the status quo.
CLICK HERE for Bazza’s innocently insolent Blog ‘To Discover Ice’

most people don't like change, so I am rarely surprised when new movements in art (ditto literature, music, medicine, fashion and every other area of creative thinking) are met with ridicule. But I was surprised when Manet, who was not really radical, was ridiculed by the art establishment and was often excluded by Salon juries.

Just today I was thinking about Edward Jenner, smallpox, vaccines and immunology. When this clever man wrote up his work for the Royal Society, they rejected his ideas as unproven, too revolutionary and embarrassing to the medical establishment!

See Cézanne’s Turn in the Road. The elder statesman of Impressionism, Camille Pissarro first met Paul Cézanne in 1861, when the younger Cézanne was still at art school. Pissarro lived in Pontoise and was familiar with the area’s best painting locales. In the 1870s Cézanne moved to Auvers-sur-Oise, 90 minutes’ walk away from Pontoise, in order to work more closely with his elder friend and mentor. Cézanne’s Turn in the road was painted during this time of direct dialogue between the two artists.

Cezanne's Turn in the Road c1881 is lovely and I can see the impact Pissarro had on their artistic relationship. I have added his landscape straight away!