Thank you to History and Will. When the United States Industrial Alcohol Company/USIA decided to build a huge molasses tank, they put it smack in the mid­dle of Boston’s North End, a community made up largely of Italian immigrants in a densely populated neighbourhood. 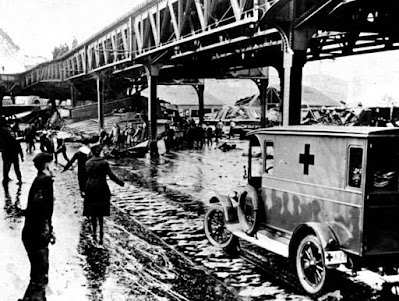 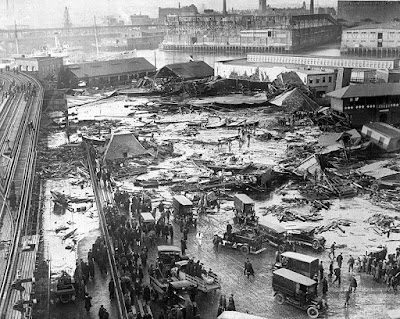 21 people were killed on Commercial St in the North End
when the tank of molasses ruptured and exploded. Wiki.
When USIA’s steel tank full of molasses ruptured in 1919, it was a perfect storm. At lunch time in Jan 1919, a giant tank of molasses burst open; 2+ million gallons of thick liquid poured out rapidly, reaching speeds of c35 mph. The day’s mild conditions prob­ab­ly aided the spread of molasses, which flowed outward for 2 blocks. Condit­ions grew worse that night as temper­at­ures dropped, caus­ing the liquid to be­come increasingly viscous. Already pinned down by fallen build­ings, some victims then became stuck in molasses, 30cm deep in some places. Rescue efforts would have likely been easier if the accident had happened in hot July and the molasses had been able to spread well away from the tank. The molasses flooded streets, crush­ed build­ings and trapped horses in an event that killed 21 people and injured another 150.

Who did it? When the molasses tank burst, the public wondered whet­her Italian anarchists had blown it up, presumably because some of the alcohol produced was to be used in making munitions. USIA’s subsidiary, The Purity Distilling Co., blamed the expl­os­ion on an anarchistic cell who had been send­ing the company letter bombs. The theory was that anarch­ists climbed a ladder and drop­ped pipe bombs into a fermentation vent, caus­ing the tank to explode. The Boston Evening Globe agreed. If it was a terror­ist act, the Boston Company would be absolved of any re­s­pon­sib­il­ity! It was not imposs­ible, as bomb­ings were common at the time. However there was no evid­ence.

Courtcase
Even while the company repeated that the tank failed because it was sab­ot­aged by Italian an­ar­ch­ists, a long investigation involving 1,000+ witnesses deter­mined the case properly. The real culprit was shoddy construction in the beginning, and fermentation in the tank later on. Analyses have since pinpointed the fac­tors that combined to create the disastrous event: flawed steel, safety oversights, fluctuating air temper­atures and the principles of fluid dynamics. The struct­ural problems of the steel tank were devast­at­ing. Designed to hold 2.5 million gallons of liquid, it measured 50’ tall and 90’ in diameter. But its narrow steel walls were too thin to support the weight of a full tank of molasses. Flawed rivet design was another problem and tough stresses on the rivet holes created the first cracks. Although mol­asses had been poured into the container 29 times, only 4 of those refills approached capacity. The 4th top-off was 2 days before the disaster, when a ship arrived from Puerto Rico carrying 2.3 million gallons of molasses.

Structural engineers already knew better, back in Jan 1919. But the tank had been built quickly in winter 1915 to meet rising demand for indust­rial alcohol, which could be distilled from molasses and sold to wea­pons companies to make WW1 dynamite and other explosives. And in­stead of inspecting the tank and filling it with water first to test it for flaws, USIA ig­nored all warnings, includ­ing visible cracks.

When shards of steel from the tank’s walls were brought into the treasurer’s office as evidence of the potential dan­ger, engin­eers did not know that the steel had been mixed with too little mangan­ese. That gave it a high transition temperat­ure, making the metal brittle when it cooled below 15c. The air temperature on the day of the disaster was 4c. Its brittleness might have been a final straw.

When it turned out that the tank failed as a result of neglect, the victims and their fam­il­ies sued. The individual law­suits were com­bined into one big lawsuit, one of the first class-action lawsuits in Mass. In an age when little govern­ment oversight or regulation was normal, the disaster also led to new corporate re­g­ulations imposed upon Boston industries. The trial had gathered input from tons of expert wit­nes­s­­es, producing 20,000 pages of conflicting test­imony. And af­ter 5 years of hearings, the court-appointed auditor found the USIA Company was responsible. Even though many ques­t­ions remained, the company did eventually pay out $628,000 in damages to the victims’ fam­ilies.

The Molasses Tank built and photographed in 1915
before it collapsed and flooded North Boston in 1919
Throughout, USIA’s famous defence lawyer Charles Choate repeated the company story, bl­aming the disaster on Italian anarchists. Choate's case was designed to prey on Boston’s paranoia over the activities of Italian anar­chists on the wharfs. The Bolshevik Revolution in Russia and the end of WW1 had ushered in the Red Scare in modern American history. In Boston, that anxiety focused on the local Italian immigrants, cul­­min­at­ing with the appalling treatment of Italian anarchists Nic­ola Sacco and Bartolomeo Vanzetti the very next year (1920).
Posted by Hels at 17.1.21

Hello Hels, Oddly, we were just talking about this spill. We had been discussing the great Norwalk, Ohio corn spill, and that reminded us of this famous molasses spull.

Whenever a perpetrator or victim is too "pat" I prefer to thoroughly examine the evidence (when available and untampered-with!) and use logic to reach a conclusion. However, scape-goaters are quick to blame the most convenient target, often with deadly results as street mobs attack innocent immigrants, Blacks, Jews, or what-have-you.
--Jim
p.s. They say on warm days you can still smell the molasses!

Industrial accidents happen all the time - remember when the Westgate Bridge collapsed in 1970. Dozens of workers died but the courts didn't blame the labour unions.

I can easily understand why the United States Industrial Alcohol Company or its subsidy would not have wanted to accept responsibility for the dead, injured and their families. Nobody would have!

After 9 long months, the Royal Commission into the collapse attributed the failure of the bridge to 2 factors: the structural design by the (named) designers, and an unusual method of construction by the (named) contractors of the project. Of the 35 construction workers killed and 18 seriously injured, not one worker nor his union was blamed.

A great story and sorry to say I began grinning as I read the first line. The idea of drowning in molasses seemed odd beyond falling into a tank.

I was grossed out by the idea of millions of gallons of thick liquid, oozing rapidly over the industrial heart of a large city. Imagine the molasses rigidly fixing the bottom half of a person's body to the ground, then watching as the ooze covered his shoulders and head. The theory that Italian anarch­ists climbed a ladder and drop­ped pipe bombs into a fermentation vent, caus­ing the tank to explode, was unbelievable.

Yet 1919 and 1920 in particular were marked by an absurd fear of far-left extremism. They were so scared of anarchism, they seemed to be terrified over the end of American society and its old social order.

Your step father was very fortunate!

I agree with Andrew, above: at first the story seems to have a comic element but that idea is soon dispelled. I suggest that the 'Red scare' still exists in the United Sates. The concept of blaming scapegoats has not changed through history.
CLICK HERE for Bazza’s dreamily divergent Blog ‘To Discover Ice’

When I started examining the impact of the post-WW1 Red Scare and the appalling attack on labour unions, I was only going to look at Sacco & Vanzetti ... and the Wall St Bombing. Then I started thinking about the Centralia Tragedy in Washington, the Boston Molasses Disaster, Preparedness Day Bombing in San Francisco, the nasty Palmer Raids etc etc.

Scapegoating wasn't invented after WW1, but it was perfected :(

I think this is an instructive post and it The Karate Cobra Kai Red Jacket is extremely valuable and learned. subsequently, I might want to thank you for the endeavours you have made recorded as a hard copy this article.