The first confirmed outbreak of sweating disease arrived in England in 1485, to­w­ards the end of the Wars of the Roses (1455–87). This led to spec­ul­ation that it may have been brought over from France by the French mercenaries used by Henry Tudor to win the English throne. Major ep­idemic waves followed in 1508, then 1517, 1528 and 1551. After that, it disappeared. 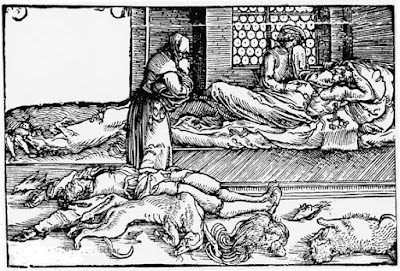 The English Sweating Sickness
History in the (Re) Making
Henry VIII and Catherine married in 1509 and had a daughter, Mary, but no surviving sons to follow Henry on the throne. Henry fancied a courtier, Anne Boleyn, and asked the pope for a divorce. Rejected by the pope, he broke with Rome, created the Church of England, and named himself head. After Anne also did not produce a male heir, she was later beheaded for treason.

The Sweating Disease in 1528 was ident­ified in Calais  (an English territory then), which was experiencing another horrid outbreak. When the disease reached epidemic proportions, it broke out in London and speedily spread over the whole of England (but not Scotland). The victim began with fever and pains in the neck, back and abdomen, vomit­ing and extremes of chills and fever. It ended with strong sweat and ghastly smell, just before the victims’ deaths. Note that it was fatal for up to half the population and at all levels of society - from the poor to royalty.
The worst sickness showed itself again in London by April 1536. In May, men of the Inner Temple died from the sickness; the Abbot of York was excused from attending Parliament because of the plague which has visited his house near St Paul’s. The election of knights to serve in Parliament for Shropshire could not be held at Shrewsbury because of the plague locally. Before the suppression of the abbeys, one of the king’s visi­tors of the abbeys found hardly any place clear of the plague in Somerset, and was much impeded in his work. In Sept one of the frequent coron­ations of new queens in Henry VIII’s reign was like to be postponed.

In Oct the plague was at Dieppe, thought to have been brought over from Rye. In Yorkshire also, the Duke of Norfolk was sent to put down the rebellion in Nov 1536 and came into close contact with plague. Many were dying in Doncaster, including 9 soldiers. At Oxford the plague was active, and the scholars had be sent into the count­ry. In London in Nov it was dangerous to be in Lincoln’s Inn.

Unlike nowadays, when most people can’t think of any pandemic before Covid, literature from previous plagues WAS republished. In 1536 a small essay on plague by the C14th bishop of Aarhus was reprinted in London, as the title declares having been “of late practised and proved in many places within the City of London, and by the same many folk have been recovered and cured.” Beyond 1538, the domestic records of State only mentioned plagues from time to time eg 1540’s summer was a sickly one throughout Britain; it introduced a different (?new) type of disease, dysenteries.

Plague had returned in the spring 1537, just months before Jane Seymour went into labour, and Henry was naturally concerned. The disease had spread rapidly across the south, reaching London and the Home Coun­ties in the summer months. Appropriat­ely Henry’s decided to withdraw him­self, family and court from the city’s hot summer and fetid air.

Henry VIII had finally produced the legitimate son he craved. In Oct 1537, Prince Edward/King Edward VI, was born at Ham­p­ton Court Palace, west of London, on the River Thames. Henry had only taken Hampton Court from Cardinal Thomas Wol­sey in 1525. The new mother Jane Sey­mour, wrote to the chief minister, Thomas Crom­well, to in­form him of the birth of a son conceived in lawful matrimony!

Edward’s christening was indeed a moment of great promise and relief for Henry, finally confirming his family’s succession. Thus the ch­ristening demanded all the splendour of the royal court and involved the attendance of elite nobles from across the kingdom, including the princesses Mary and Elizabeth. Prin­c­ess Mary and Thomas Cranmer, Archbishop of Canterbury, were two of the godparents.

Three days after Edward’s birth, the infant prince was christened in the Chapel Royal at Hampton Court, attended by c400 people. Edward in a white christening gown was collected from his mother’s palace rooms and carried to its chapel under a royal canopy by prominent members of the English nobility. The prince was greeted by 24 trum­peters on his arrival at the chapel.

A mandate was issued to London’s sheriffs, placing plague restrict­ions on those who could attend court on that day. The nobles chosen to carry the prince at his christ­en­ing remained where they were in Croydon Palace, 20 ks east of Hampton Court, rather than travelling to Hampton Court and risking carrying infect­ions with them.

Following the ceremony, Edward was returned briefly to his parents in the queen’s private apartments, before being taken by his nurses to be kept in isolation in his own lodg­ings in Chapel Court, to protect the precious boy. Only those with royal approval were all­owed near the child to pro­tect him from possible infection or harm. This all revealed the tangible anxiety around the welfare of the child, parents and court in the context of a national health crisis.

It wasn’t until 1539 that Parish Registers of the births, marriages and deaths began to be kept, at least irregularly. By their means it was possible to trace the existence of epidemic disease in the country, which might not have otherwise been reported. 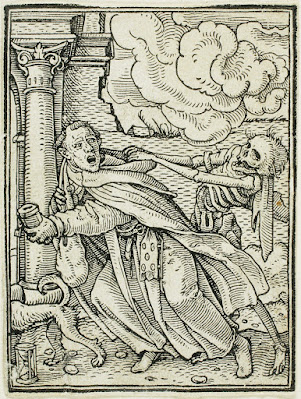 The Monk, by Hans Holbein, depicting death
The New Yorker.
Conclusion
The Black Death of the late C14th killed more people than the 1536-7 plague, as did the great influenza pandemic in the early C20th, and the disease that struck Tudor England was just as terr­if­ying. But nothing is new under the sun and we moderns still have a lot to learn. Pandemics still arrive freq­­uently, still spread quickly and still kill randomly. In every century and in every country, isolation must be mandatory and vaccinations urgently supplied.

I believe Henry VIII's coronation was relevant because so many people flocked into London to see the big event. In 2021 this sort of crowded event would be called a super spreader because the minority of infected people stood shoulder to shoulder with healthy people.

Hello Hels, It is a mistake to equate various old plagues with newly-evolved ones. People point out that humanity survived the old ones, but they forget at what cost, because they didn't personally know the victims. Also, new epidemics can be much more virulent than old ones, or can work in a different way. Cruelest of all are those who claim that Covid is not so bad and should be left to run its "course" because so many of the victims are elderly!

With more people living closer together than ever before, basic research needs to be concentrated on viruses and transmission, as you point out, especially now that we scientifically know so much more about them.
--Jim

16th century doctors did not understand the causes of pandemics, nor the treatments. But they did certainly understand the importance of isolation. People were told not to shake hands or hug even friends on the street, until they asked about every single member of the friend's family. A mass gathering like a coronation celebration would have been an inevitable catastrophe.

I have only heard one or two people _openly_ say (in 2020) that Covid was not so bad and should have been left to run its course because so many of the victims were elderly! Not only were such people cruel to all our parents' generation, they were also scientifically ignorant and destructive of community life. But I do remember Trump and Bolsonaro saying Covid was like a little flu, so a lockdown would be a ridiculously over the top response.

Hi Hels - we'll look back on this time with interest ... especially if we can get through without any personal damage. We've had the knowledge in this country and have had the planning in the governmental records ... just sad - no one took responsibility for looking into things ... the knowledge was there. Where it'll end up - will be interesting to find out in due course. We're in bad ways here ... I just hope to stay safe - all the best - Hilary

They did seem to realise then that contact with infected people was the way the disease was spread but this seemed to take centuries before such knowledge was widespread.

The French called the disease the English Sweating Disease. Obviously Trump was not the first to locate the origins of a pandemic in other countries.

Agree totally that many nations had the knowledge and have had the planning in the governmental records, yet no one took responsibility when the pandemic first appeared and once it spread out of control. No-one liked total lock down of course - people who couldn't work from home lost their income and depended on the governmental payments instead. Elderly people in care homes weren't allowed to see their children, face to face, for 5 months. Planes weren't allowed to fly into Australia, even to bring local citizens home.

As miserable as our lock downs were, the total deaths by Jan 2021 were only 909 in Australia and only 25 in New Zealand. [To compare with Britain, Aus' population is 25.5 million and NZ's population is 5 million].

even as early as the Black Death pandemic of 1348, they may not have known whether the disease was spread by rats, fleas, dirty water or sailors from Crimea or Italy. Yet people who could afford to leave the crowded, gungy cities did so... they saved their families by isolating themselves and living in the clean, green countryside. The knowledge about avoiding contact with infected people has been there for a very long time.

The deadly 1918-19 flu emerged out of Kansas USA, AIDs may have come from the Belgian Congo, and SARS likely came from Guangdong Province China etc. Unless the recipient nations are warned of the invading disease and can institute tracing from the beginning, labelling the pandemic doesn't seem to have much epidemiological value.

very current... for almost every country in the world. Brasil probably didn't learn too much from Europe's epidemics in the medieval and Renaissance eras, but more modern epidemics were horrific.

The Spanish flu arrived in São Paulo in late 1918 via the sailors on board ships. By early 1919, 350,000 people, two-thirds of São Paulo's population were infected and thousands had died. What a tragedy, just like the current pandemic :(

History repeats itself, these pandemics come in cycles.

Global travel and liberal thinking leads a virus to have its Heyday. Democratic governments leave individuals to make the sensible choice to avoid spreading the virus. Not everyone is sensible and some people need to be told what to do and others strongly oppose any advice and call it a conspiracy theory.

I wish more people would read history to see how to keep themselves safe.

spot on! I also wish more people would read history to see how to keep themselves safe. Then if they want to continue believing in conspiracies for themselves, they can at least protect their children, older parents and colleagues from the pandemic.