New York’s prosperity before the Civil War was closely tied to slav­ery and the Cotton South. But it was only in the southern stat­es, where the economy was based on the plant­at­ion agriculture, that sl­av­ery was legal. Slavery had been ended in the nor­thern states where industrialisation did not require cheap labour. Thus the nor­th­ern states supported the abol­it­ionist movement eg the Penn­syl­vania Soc­iety for the Abolition of Slavery was established in 1775. 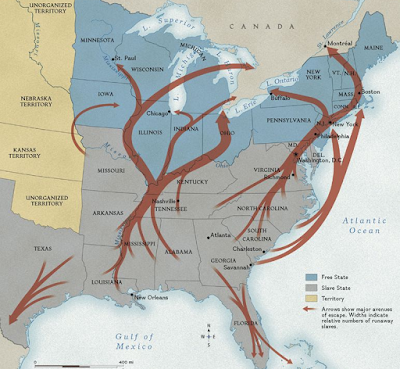 A network of people taking slaves from the southern states (grey)
to freedom in the northern U.S (blue) and Canada.
Credit: National Geographic
The reason many escapees headed to Canada was the Fugitive Slave Act 1793. This draconian Act allowed local U.S govern­ments to app­rehend and extradite escaped slaves from within the bor­ders of free states, back to their origin home. And to pun­ish helpers! In the deep South, this Act even made capt­ur­ing slaves a lucrative business.

The “Underground Railroad” apparently operated from the early C19th. The Quaker Abolitionists were the first organised group to act­ively help escaped slaves. In the early 1800s, Quaker ab­olit­ion­ist Isaac Hopper set up a net­work in Philadelphia that help­ed slaves on the run. Then in North Carolina. And the Af­r­ican Methodist Ep­is­co­pal Church (1816) also helped ex-slaves.

The term Underground Railroad came in 1831 when slave Tice Dav­ids escaped from Kentucky and his owner bl­amed an under­ground railroad for taking him. Vigilance Committees, created to pro­tect escaped slaves from bounty hunters in New York in 1835, then expanded. The escaped slave-cum-merchant Robert Purvis form­ed Philadelphia’s Vig­il­ance Committee in 1838.

The term Under­gr­ound Railroad soon went into the language. It was a clandestine network of people, Afric­an Am­erican & white, offering protection to escap­ed slaves from the South, so they could move to free nor­th­ern states and to Canada. In their term­in­ology, those who sought slaves seek­ing freedom were pilots. Those who guid­ed ensl­aved people to safety and freedom were conduct­ors. The escapees were passeng­ers. People’s homes-businesses-churches, where fug­itives and conduct­ors could hide, were stations. Those operating the stations were the stat­ionmasters and those who provided supplies were the stockholders.

If caught, fugitive slaves were forced to return home. People caught aiding escaped slaves faced arrest & gaol, whether they were living in slave-stat­es or in free-states. Thus very few people kept records about this secret activity, to protect home­owners and fugitives.

By 1837 Rev Calvin Fairbank helped slaves escape from Kentucky into Ohio. In 1844 he partnered with Vermont school-teacher Delia Webster and was arrested for helping escapees. He was pardoned in 1849, but was re-arrested and spent another 12 years in gaol. New York City-based escaped slave Louis Nap­ol­eon’s occupation, as listed on his death cert­ificate, was Underground RR Agent! He guided fug­it­ives he found on docks and train stations.
Most operators were normal farmers, business men or min­is­ters, although some wealthy people were invol­ved eg mil­lionaire Gerrit Smith. In 1841, Smith bought an entire family of sl­aves from Kentucky and set them free. Former railroad oper­ator Josiah Henson created the Dawn Institute in 1842 in Ontario to help escapees in Canada learn work skills. 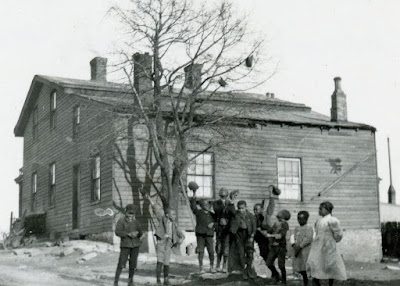 Safe house, provided by Quaker abolitionist Levi Coffin,
in Cincinnati, Ohio.
National Geographic
Some Northern states tried to combat the Fugitive Slave Acts with Personal Lib­erty Laws, struck down by the Supreme Court 1842. The sout­herners were angry and had the Fugitive Sl­ave Act up­dated in 1850 to create harsher penalties on es­caped slaves and their helpers. Not surprisingly, the 1850 Act led to the Railroad reaching its peak (see map above).

Most of the slaves helped by the Underground Railroad escaped via border states eg Kentucky, Virginia and Maryland. There were many well-used routes stretching west through Ohio to Ind­iana and Iowa. Others headed north through Pennsylvania and in­to New England or through Detroit on route to Canada.

Meanwhile Canada offered blacks the freedom to live and work where they wanted, and ext­raditions had largely fail­ed. Some Undergr­ound Rail­road oper­at­ors based themselves in Canada and worked to help the arriving fugitives settle in. Others, eg ex-slave and famed writer Frederick Douglass hid fugitives in his Rochester NY home, helping 400 escapees make their way to Can­ada. Rev Jermain Loguen in neigh­bouring Syracuse helped 1,500 ex-slaves.

Araminta Harriet Tubman was the most famous conductor for the Under­ground Railroad. This slave escaped a plantation in Mary­land with two of her brothers in 1849. She travelled to Penn­sylvania, then returned to the plantation to rescue family mem­bers, but her husband wouldn’t leave. Distraught, Tubman joined the Under-ground Railroad & began guiding other escap­ed slaves northwards. Tubman regular­ly took groups of escap­ees to Canada.

William Still, born to fugitive slave parents in New Jersey, became a prominent Philadelphia citizen. An assoc­iate of Tub­man’s, Still kept an in­val­uable record of his activities in the Underground Railroad and kept it safely hid­d­en. It was publish­ed after the Civil War.

Abolitionist John Brown was a conductor on the Under-ground Rail­road into Canada. But Brown created an armed force that made its way into the south and freed slaves by gun-point. Brown was hanged for treason in 1859. Charles Torrey, who had once worked as an abol­it­ionist newspaper editor in Albany NY, was imprisoned for 6 years in Maryland for helping slave families escape.

By 1860, the Railroad had freed c100,000 enslaved people. And bec­ause it was at the heart of the abolitionist movement, the Railroad heightened divisions between the North and South, setting the stage for the Civil War. The Railroad cl­osed in c1863, then its work moved up as part of the Union ef­fort against the Con­federacy. 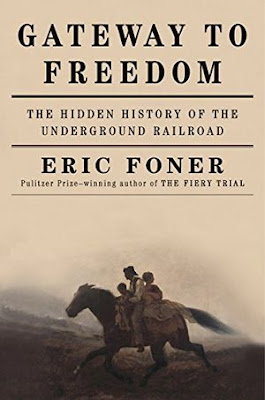 The Railroad became a mainstay of both national history and local lore, and is now in the popular American literature. Eric Foner showed that the Underground Railroad was not hidden; abolitionist groups made little secret about their assisting runaways.
Posted by Hels at 16.1.21

Absolutely fascinating and how brave were the people who helped and put their own liberty at risk. Obviously the country was north south divided. Now, still a divided country but less geographically.

We badly exploited populations in the colonies before Federation, but was it ever slavery?

the slaves who ran away with their families were risking a brutal return to their owners - not gaol or death because the slave owners would have lost money if their "property" wasn't working in the fields. The people who helped the escapees were even braver still; they faced arrest and gaol, even if they were living in free-states! The Fugitive Slave Act 1793 showed just how obscene Congress was :(

Australia could never have had slavery, once Britain ended it across the Empire via the Abolition of the Slave Trade of 1807. However in some ways, slavery was never needed here. Firstly all the harsh labour was provided by convicts shipped out by the British courts. They were provided with food, bed and clothing, but had no say in the work they did and there was no pay.

Secondly First Nations people and Pacific Islanders knew that their labour was grossly underpaid and exploited, but could do nothing about it. So yes we should differentiate between gross exploitation and slavery, but it was not a history I am proud of.

Hi Hels - the concept of the Underground Railway was totally understandable ... and must be fascinating to read more about; there are more and more stories about how much was achieved by many of these incredible people ... some talented, some just plain determined ... I would hope people will be interested to learn more ... and be open to those terrible days. Take care - Hilary

agreed. So often we are disappointed with human beings being totally self centred, at the expense of almost anyone else on the planet.

Then we hear of Florence Nightingale and her nurses saving soldiers' lives in Crimea, or Nicholas Winton bringing trainloads of orphan children out of Czechoslovakia to Britain during WW2. I would say the Underground Railway was equally as inspiring.

Text books are fine, but you probably also found that students love being given extra reading options that they can follow up at their leisure. My students have often cited reading treasures they found in blog posts.

Hello Hels, In early 19th century America, there was a whole abolitionist movement going on; the main part which gets a lot of study is the Underground Railroad. One of the reasons for its success was abolitionist meetings that got people primed to do what they could to help the escaping slaves, and eventually to end slavery altogether. These were the people who hid and helped escaped slaves at great risk to themselves.

There were famous abolitionists such as William Lloyd Garrison who went from town to town giving speeches and getting people involved, a bit like the later Chautauqua movement, only with more at stake. One locus of this movement was Oberlin College, which was incidentally the first American college to be coeducational.

Today people point with pride to buildings that were stops on the Underground Railroad. Sometimes zeal combines with fuzzy architectural knowledge so that post-war buildings, such as some built in the 1880's are given full credit as being "stops."
--Jim

In "White Cargo" transportees to the American colonies (and eventually Australia) were called something other than slaves. In my day the underground railroad also led to Canada. This was because when Russia erupted in communism and dropped out of WWI, with Germany's other enemies still owing These States loans advanced while Russia was still helping throttle the accursed Hun, the Supreme Court "could not see" conscription as involuntary servitude. Even today youngsters are "required" to register for conscription.

I found thid post fascinating and informative. I have not heard of the Underground Railway. There must have been numerous brave people whose sacrifices remain unknown.

I knew of Colin Whitehead's acclaimed novel The Underground Railroad and I knew about the network of safe houses getting ex-slaves to the north and Canada but I never understood that the novel dealt with that subject. I'm still a bit unclear as to whether we are talking about an actual physical railroad or just a route.
There are various parallels between these events and what others did during the war to save many Jews.
CLICK HERE for Bazza’s supposedly sartorial Blog ‘To Discover Ice’

there was indeed a whole abolitionist movement going on from the 1830 period on. And all the credit to them, serious people who did not hide their beliefs from the public. My problem was that abolitionism became an even more controversial political issue than it was before; it divided the country even more. So the Underground Railway people totally kept their names out of the public eye, and had their successes in silence.

the concept of conscription is an interesting one. At least during the Vietnam War in Australia, the boys were under 21 (so they were minors) and were taken without their parents' consent or their own cooperation. Boys who would not obey the conscription order were often charged and gaoled. So although conscription was never slavery, it showed what a legitimate government could get away with.

I think that if the Underground Railway didn't have to be so secretive, it would have been written up in newspapers and books straight away. And the brave souls who aided the network along its routes would have been happy to be become public figures.

But I have not found records mentioned until well after the Civil War ended in 1865.

there was never any railway system, just a clandestine network of helpers, safe houses, food supplies and perhaps horses.

Colson Whitehead's book The Underground Railroad (2017) was the fictional story of a teenage slave who escaped from a Georgian plantation. Although I haven't read the novel myself, it was considered to be so good that it won the Pulitzer prize.