At Eternity’s Gate (2018) is the latest film about Vincent van Gogh 1853–90 (Willem Dafoe), one of the western world’s most famous or infamous art­ists. Ac­ad­emy Award-nominated direct­or Julian Schnabel, himself a painter, made a film opening the last few years in the world of the artist for modern viewers.

From undergraduate lectures, I remember that Vincent van Gogh was seen as a disturbed person and his art was not loved. Yes the artist was erratic and eccentric, and no idea what­soever about how to approach a woman to converse. But by the time van Gogh moved to Auvers-sur-Oise in May 1890, the world was becoming a bit more aware of his artistic talents. 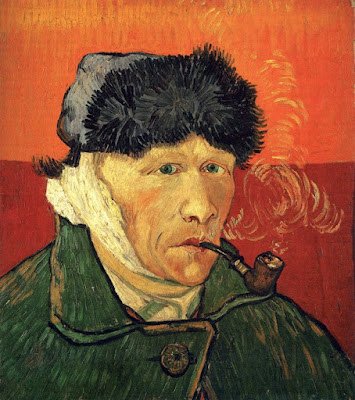 Self portrait with bandaged ear
by Vincent van Gogh, 1889

As an undergraduate I didn’t like French painter Paul Gauguin (Os­car Isaac) eit­her, but for a different reason. He deserted his wife and children, was rudely insensitive to van Gogh and later mar­r­ied very young girls in Tahiti. Although Paul Gauguin was ­de­picted as more supportive than he was, Vincent really did not understand that Gau­guin was also his rival and crit­ic. Gauguin had been forceful in his debates with ALL his fellow artist about their art skills and persp­ectives. But Gauguin had been blindly adored by Van Gogh, so when Gau­­guin said he was deserting Arles, Van Gogh was beyond consolat­ion. [The two never saw each other again, though they continued to correspond via mail].

The Yellow House (1888) in Arles was where Van Gogh rented four rooms in May 1888. He occupied two large ones on the ground floor (atelier and kitchen), and two small rooms above. van Gogh's guest room was where Gauguin lived for nine weeks from late Oct 1888.

I suppose Vincent was super fortunate to have a caring supp­ortive brother Theo (Rupert Friend) in the same country. Theo was in the right industry (art-dealing) to assist, plus he had enough mon­ey to keep the impoverished Vincent alive with a monthly allowance. The most difficult part of Theo’s life was when he had to race to Vin­cent’s side to save him eg whenever Vincent was in hosp­it­al.

Mental disturbances are always difficult to watch, even if the viewers knew in advance about van Gogh’s mental life. One thing the viewers could NOT know before the film was the way Vincent per­ceived the nat­ural world. Whenever he went into the open country to paint en plein air, there was a transfixed, almost ecstatic image on his face. The same was true after being released from a year at the St Remy asylum , with Dr Gachet (Mattieu Almaric) in Auvers. 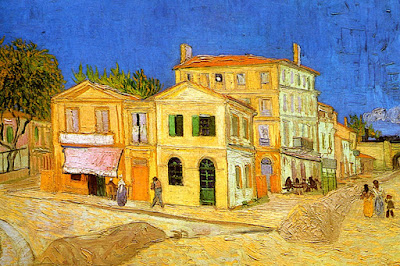 But without the mental disturbance, how would the film explain Vincent’s emotionally sad & socially isolated life? His self-mutilation or death? It was probably always going to be quite easy for the director to show how certain the Dutchman was of his artistic vision. But it was the actor who had to show Van Gogh’s tortured life. It was an art-driven life, but the steering wheel was chaotically emotional.

I wasn’t going to discuss Dr Gachet, but now it seems that van Gogh could talk to the doctor in a way that he could not talk to ot­hers. Why did he paint, even though he never sold any works? Why did cut off his ear? Why did he want Dr Gachet to pose for a port­rait?

Nor was I going to discuss the priest. Vincent’s father had been a Protestant minister in the Netherlands and the children were of course brought up in religion. Young Vincent started his theology studies, but instead he moved missionary work in a poor mining reg­ion in Belgium. I men­tion this for two reasons. Firstly Van Gogh was so seduced by nat­ure that the film suggested nature was where he saw God. He had long shown a strong attraction to religious images. For a non-Christian art historian, I didn’t know what to make of Van Gogh’s near-mystic visions. The film left it to the viewer to decide if the visions were the source of his artistic genius, symptoms of illness, or religious faith. Secondly in the film van Gogh’s had a crystal clear conver­s­ation with a priest who was in charge of van Gogh’s mental asylum. Yet van Gogh replied with surprisingly fluent theological ­answers. 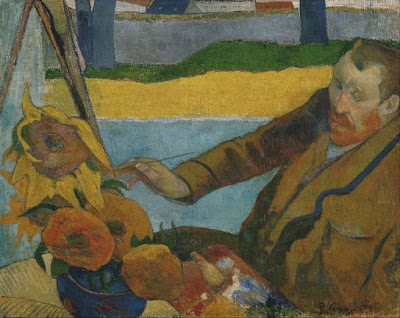 There were some imagined thoughts in the film. Van Gogh said of the villagers in Arles, “I just want to be one of them. I would like to sit down with them and have a drink.” But that seemed a very unlikely thought for the most sociably unskilled person in the world. Similarly Vincent stopped a shepherdess on the road and ordered her to lie down so that he could quickly get her image onto his canvas. Vincent thought it was art; the viewer thought it was assault and battery. His death too seemed imagined - the film showed that Van Gogh did not take his own life, but was shot instead by local hood­lums. And I wonder where the final scene came from - the artist in his coffin surrounded by his paintings!

Re the camera work, I liked Caryn James review: the film took an impressionist approach, freely inventing scenes and swerving from history when it suits him. Van Gogh was usually considered post-Impressionist, but the metaphor worked well. For example the camera flowed over a field of dead sunflowers and not much later, a well-known Van Gogh painting of bright sunflower appeared on his bedroom wall without any fuss. Peter Bradshaw wrote that wordless passages showed van Gogh striding through the landscape, transfixed and almost stupefied by what it offered. Note the piano chords on the soundtrack, maybe the secular equivalent of organ music.

In and out of asylums, Vincent van Gogh died at the tragically young age of 37 in Auvers-sur-Oise. Since leaving his homeland in 1886, he never saw the Netherlands again.

Hi Hels - I'm sure I'll see this version of van Gogh's life ... I was so impressed with the 'Loving Vincent' film that I saw and posted about last year ... that I bought the DVD so I could watch it when I wanted to ... as it was made as a fully painted animated feature film, covering the process of his life - particularly exploring his death.

He was an amazing artist ... they see things so differently ... fascinating post - thank you for elaborating on this film ... cheers Hilary

I am so pleased you saw "Loving Vincent", because it shows that there have been a number of very different takes on the same sad/promising theme. Many years ago I saw "Vincent and Theo", another fine film that particularly focused on the two brothers' relationship.

If Vincent was suffering from delusions, anxiety, reactive depression, bi-polar disorder and suicidal ideation, the medical profession did not seem to help him.

See the The American Journal of Psychiatry, 1st April 2002.

Hello Hels, I suppose that it is difficult to write about or film Van Gogh's life. He is so well known and such an unusual/extreme character that a movie has to decide whether to be documentary-truthful or whether to fictionalize to make a point. I personally would prefer scenes that did not stray too much into the fanciful or speculative. Movies and books can guide us, but in the end we have to look at Van Gogh's paintings to see what he was able to see in people and landscapes.
--Jim

great reference, thanks. During van Gogh’s regular hospitalisations, it seems that the artist was only treated for epilepsy. This was despite van Gogh's blatant psychosis, hallucinatory terrors and violent attacks on self and others. Potassium bromide seemed to calm him but repeated abuse absinthe started up further psychotic episodes.

The last psychosis (in 1889-90) was van Gogh's longest lasting, most terrifying and in the end fatal episode. What drug and non-drug treatments were available for hospitalised psychotics in the 1890s?

agreed. If you know a lot about a particular topic, even small mistakes/differences in films and books stand out glaringly. For example I didn't know much about Frida Kahlo's life when her biopic came out in 2002 - so I loved the film :) But because we knew so much about van Gogh's life, it was much harder to review At Eternity's Gate fairly. I am so glad I used other peoples' reviews to discuss the camera work fairly :)

There was a very different Vincent film with Kirk Douglas which is surprisingly good and, of course, Don McLean's song really tells us a lot about what it was like to be van Gogh: "They did not listen, they're not listening still. Perhaps they never will."
There is a van Gogh painting of a cornfield with a path that seems to peter-out, leading nowhere - the perfect metaphor for the artist's state of mind.
CLICK HERE for Bazza’s instantly intransigent Blog ‘To Discover Ice’

nod..sometimes the links between paintings, music, films and literature slip past us without much notice. But sometimes a clear theme arises, over time and in very different media. This struck me with crystal clarity when I was thinking about Girl with a Pearl Earring.