If I thought there was a lot of sex going on in the late 1960s, those of us interested in turn of the century Vienna had to do some rethinking. Here is my old post republished, now with a greater look at contemporary anti-Semitism.

Alma Schindler (1879-1964) was born in Vienna to famous landscape artist Emil Schind­ler and singer Anna von Bergen. Emil Schindler was known as an anti-Semite while Alma herself became an anti-Semite herself, even after her father died when she was only 12. This was strange, since two of Alma's three husbands were Jews, as were three of her favourite lovers.

After her father's death in 1892, Alma's mother married her late husb­and's former pupil Carl Moll (1861–1945), painter and co-founder of the Vienna Seces­sion. Moll’s Secessionist connections were important for young Alma; her lively social life expanded as she met the other Vienna Secession artists, including the very attractive Gustav Klimt (1862–1918). Klimt adored her but I am not sure her considerable musical talents were being supported by her cultivated colleagues.

Alma played the piano from childhood and loved composing. She met Jewish composer Alexander von Zemlinsky (1871—1942) in 1897, and learned composition with him until 1901. Zemlinsky had been a great teach­er for the very Jewish Arnold Schönberg (1874–1951) and a great contact for Alma. Zemlinsky and Alma fell in love, although Alma teased her lover about his ugly Jewish features. The relationship failed. 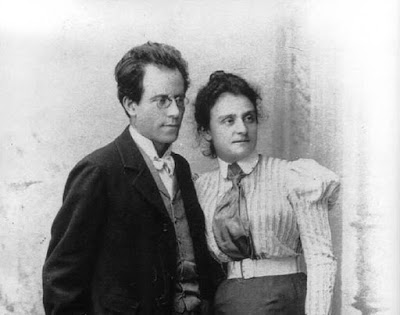 In 1901 Alma attended Bertha Zucker­kandl’s literary salon, famous in cultured Jewish Vienna, where she began an affair with Austrian Jewish composer Gustav Mahler (1860-1911). Note that Gustav Mahler could only become the director of the prestigious Imperial Vienna State Opera if he converted to Catholicism. So he did.

While still in a relat­ion­ship with Zem­lin­sky, Alma started an aff­air with Mahler, and became engaged. In March 1902 they married and moved into a home near the Opera House where two daught­ers were born. With her own career nipped in the bud, Alma became the chief supporter of Gust­av's music. Probably Mahler had never liked Alma and Zemlinksy being lovers. But it was only when Gustav finally realised his wife had comp­os­ing talent that he helped her prepare her songs for public­ation in 1910. Good grief.

Mahler and Alma trav­elled together to New York, where Gustav work­ed as a conductor. In 1911 he tragically died, soon after their return to Vienna.

In 1910, Alma met and became very close with the young archit­ect Walter Gro­p­ius (1883–1969), my fav­ourite Austrian architect and event­ual­ly director of the world’s best art school, Bauhaus School of Art and Design. 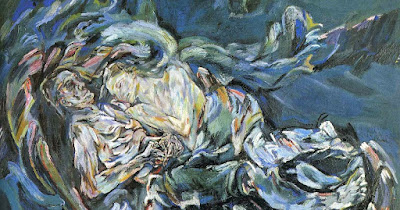 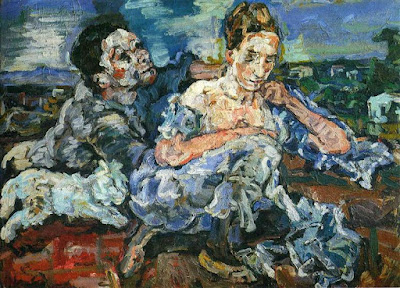 After Mahler's 1911 death, Alma also had a passionate affair with young Czech Christian artist Oskar Kokos­ch­ka (1886–1980). Alth­ough they later broke up, Kokoschka continued an unrequited love for Alma and paint­ed The Bride of the Wind 1913 and Lovers With Cat 1917 in her honour.

Kokoschka enlisted in the Austrian Army, so Alma resumed contact with Gropius who was a soldier himself. She and Grop­ius married in 1915 and had a child together, Manon Grop­ius, who died tragically at 18. Brilliant composer Alban Berg wrote a violin work in Manon’s honour.

With Gropius still in the army, Alma began a very public affair with Jewish Czech poet and writer Franz Werfel (1890–1945) in 1917. Within a year, Gropius and Alma agreed to a divorce which became final in 1920. However Alma and Werfel did not marry until 1929. Gropius, on the other hand, married Ilse Frank in late 1923 and they remained happily together until his death.

In 1938, Werfel’s Jewishness became critical. Soon after the Aust­rian Ansch­luss, Werfel was forced to flee to France; so Alma joined him in Southern France from 1938 until 1940. With the German occup­at­ion of France, Werfel faced Nazism directly and needed to imm­ig­rate to the USA urgently. Luckily Varian Fry, organiser of a priv­ate Am­erican relief and rescue organisation, was saving intellect­uals from Mars­eilles. Fry arranged for the Werfels to walk across the Pyrenees into Spain and Portugal, and by ship to New York.

I do not understand why Alma went into exile with her Jewish husband since a] she had never liked the Jewish community, b] she was not opposed to Nazism and c] she actively supported Franco in Spain. Perhaps love and sex were more powerful than anti-Semitism. 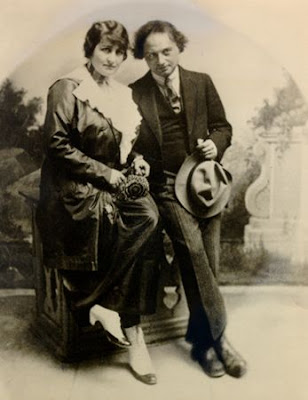 In the USA Werfel had great suc­c­ess with his novel which was made into a film in 1943. But sadly Werfel died in the USA in 1945. None­­theless Alma soon became a USA citizen and remained a major cultural figure in New York where she wrote her two Mahler biog­raphies. It is interesting that when Alma died in 1964 in New York, she chose to be buried back in Vienna, along­side her first husband Gustav Mahler. She had been a core member of Vienna’s cultural elite AND the main authority on Mahler's life and works.

Early in life Alma und­erstood that in male-dominated cultural Vienna, her role was to be a muse for brilliant men, in bed and out. But I wonder if being a famous socialite and active supporter of Alexander Zemlinsky, Gustav Mahler, Walter Gropius, Oskar Kokoschka, Franz Werfel and others was enough for her. Her own musical talents were never given the same professional support that the men received. Bride of the Wind: life and times of Al­ma Mahler-Werfel was written by Susanne Keegan

Hello Hels, I have often noted that people reported to be anti-Semitic get married to Jewish people. In addition to Alma Schindler (twice) there was horror writer H.P. Lovecraft, whose Jewish wife reportedly left him because of his extreme views. A. Edward Newton was reported to be anti-Semitic, even though married to a Jewish wife. I have my questions about Newton though, since he seems an affable person, and there are a number of testaments of his love for his wife. Perhaps talking as a conservative businessman of his era, he sometimes overstepped the boundary, but I have read all his books without coming upon some offensive statement.

Allied to this are the VERY anti-Semitic people (think Alfred Rosenberg) who were reported to have Jewish blood.
--Jim

Vienna was undoubtedly the cultural centre of the universe. So Alma was in the right place at the right time for great music, writing and art.

I visited your blog for the first time and just been your fan. I Will be back often to check up on new stuff you post!
click here

Emil Schindler was a famous artist before and after Alma was born, an anti-Semite whose art career was not remotely hurt by his racism. But Alma was only 12 when 1) her father died and 2) her mother remarried another famous artist. So in the end, Alma was more known for her own nasty anti-Semitism than any anti-Semitism she inherited from Dad.

She was gorgeous looking, educated, talented and seductive, but she had a very nasty mouth.

Alma's parents and their friends would not have considered living anywhere else but Vienna. Alma and her sister (plus her half siblings later) grew up with every exhibition open for their viewing pleasure, all the piano classes they wanted, more books than a public library and so on.

So it was interesting that Alma and her spouse de jour left Vienna during WW2, via France, to the USA.

Thank you. The lasting questions for me are: Why did Mahler ask his fiancee to give up all hopes for her own career? And why did Alma agree to devote herself full time to supporting her future husband's career?

There is an old story about a man who loved Mankind in general but despised every individual he ever met. On the other hand, there are some who despise a race, people, or nation in general but who can, like Alma, come to love individuals of charm and talent no matter what their race, creed, or color. Sometimes, if they see enough of these people, they can overcome their initial prejudice. There is an interesting op-ed in today's Wall St. Journal about a young Moslem woman from Somalia who was able to overcome her virulent anti-Semitic upbringing.

Thank you for this truly fascinating account. Will anti-semitism ever be totally overcome? I hope so, but I also doubt it.

I suppose it all depends on whether the racist person is just going with the common flow in his/her country or if the racism is deeply believed by the individual. In late 19th century and the first half of the 20th century, anti-Semitism was as much part of Viennese society as was espresso coffee. Nobody thought much about it.

I can imagine that in struggling communities, Jews will also be made into handy target for the poor and oppressed, and will never end. But Vienna was well educated, culturally rich and beautiful to look at. Anti-Semitism was even more disgusting in Vienna than, say, Damascus.

Pathological cruelty, antisemitism, vanity and a sense that the world owed Alma Maria Schindler something in token for her brilliance and beauty were some of the traits her admirers and enemies alike recognised in Alma, traits also shared by her hero, Richard Wagner. Like him, she was a passionate follower of Nietzsche.

She greatly admired Mahler, the eminent conductor of the Hofoper (Court Opera), but she was never really a fan of his music, the sixth and seventh symphonies and Das Lied von der Erde excepted. She was attracted to his enormous energy, not his music.

At the crisis point in the Mahler's marriage, Alma's affair with the young architect Walter Gropius, the death of their five-year-old daughter and the discovery of his heart defect – Mahler was advised by Sigmund Freud to encourage his wife to return to composing. Mahler entreated Alma to review her songs, even editing and publishing them for her.

Only 14 of Alma's lieder compositions survive today. They show that she has the rare gift of melody. The structure is often in strophic form, and has a Brahmsian weight of purpose and resolve, but her harmonic language is formed from the influences of her teacher Zemlinsky, and of Arnold Schoenberg and Alban Berg (with whom she also had affairs).

Thank you for proving that Alma Schindler Mahler was a very talented composer. But once Gustav Mahler admitted that he had made a terrible mistake in ending his wife's career, and was fully prepared to review, edit and publish her works, what happened? Did she compose regularly but the compositions did not survive?

what a lady . She must have had a mighty ego to have dallied with so many at once and to have been so decisive in taking for herself these very gifted men.Was it a mighty anger and a drive to get her own back for a stymied career ?? Whatever her attitude to Jews she certainly wsnt indifferent in her passion or her hatred .

It seems to me that her focus on life was art (music), sex and love leading to her infidelity and also her loyalty in unexpected places...

fidelity mean sexual and emotional faithfulness to a person to whom the individual owes that responsibility. Alma Mahler said she did not owe that responsibility to any one. In fact Oskar Kokos­ch­ka was the only man she truly loved in her long life. Instead she did show endless intellectual and creative support to all the very gifted men in her life.