Sydney Opera House sits on Bennelong Point, a space first developed as a fort named after Governor Macquarie. It was later used as a tram shed which was demolished in 1958. The project of the Syd­ney Opera House began in 1954 when NSW state premier Joe Cahill brought together a comm­it­tee to begin work on procuring an edifice that would be a credit to the state not only today but also for hundreds of years. An internat­ion­­al design com­p­etition was launched in 1957, attracting 233 entries from around the globe. 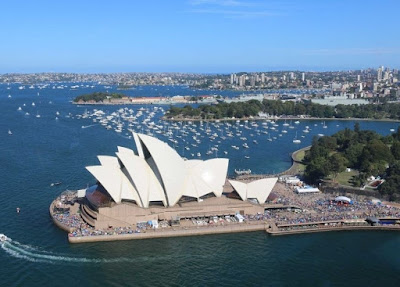 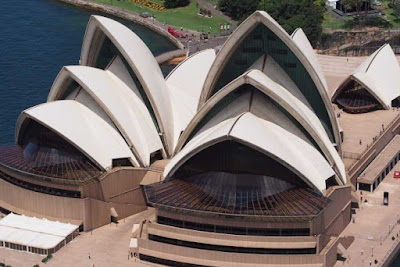 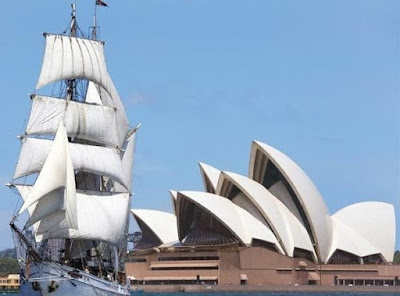 Under the influence of Judge Eero Saarinen, the jury were emboldened into reaching for an ambitious concept of an opera house which was capable of becoming one of the great buildings of the world. They selected 38-year-old Danish Architect Jørn Utzon as the winner, writing "because of its very original­ity, Utzon's scheme is clearly a controversial design. We are however, absol­utely convinced of its merits." Utzon won ₤5000 for his submission.

In August 1958 the construction process began with the demol­ition of the Fort Macquarie Tram sheds, which stood on Bennel­ong point.

Utzon began work, assuming that it would take 18 months to develop the design documents for the project, which would be completed 15 years later. But by the time the building was opened in Oct 1973, the fervour of the project had taken several turns which marred the otherwise spectacular design and technical ac­h­ieve­­ments: the unexpected death of Cahill, a change in state government, concerns about time delays and the political football of the budget, all amplified by the constant savage media swirl around the project.

By 1966, disputes erupted between Utzon and the state govern­ment over progress, leading ultimately to Utzon's public and diff­icult resignation. Utzon's popular and professional support in Sydney and internationally was passionate. Rallies in support of Utzon's re­turn to the project marched on Parliament house.


However a state government keen to show progress quickly appointed a panel lead by Peter Hall. Hall's most clear contribution was com­ing up with the solution to the large glass walls on the Northern Kirribilli façade.

The sails sat on top of a heavy podium, which was believed to be the biggest column free chamber in the world. The highest roof shell was 67 metres above sea-level, the equivalent of a 22 storey building. Note that the sails were built with 3 tower cranes made in France for this job, costing $100,000 each. 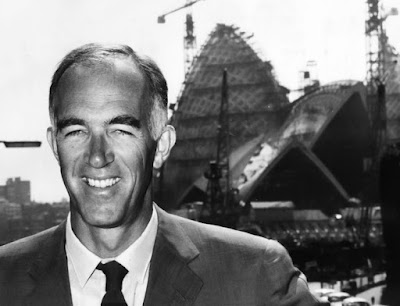 Utzon, 1965
In front of the Opera House being constructed

After Utzon's departure in 1966, or as a consequence of it, another major decision was made that would haunt the project. At the requ­est of the ABC, the use of the two main halls were changed to make the main hall, originally intended for Opera, into a symphony con­cert hall of 2,800 seats. The smaller venue was converted from the originally intended drama theatre to the primary opera venue. This compromise in the middle of construction added complexity to the project, as installation of the last precast shell unit of the famous sails had already been completed. The change forever plagued opera performances in the smaller space, which remained too cramped for their productions.

After leaving the difficult and very public experience of the Opera House project, Utzon amazingly got back to new work and continued to apply his approach to designs. The best projects included his own Mallorcan house, Can Lis, in 1966; an Australian family retreat originally intended as a holiday house; the Bagsværd Church outside Copenhagen, designed in 1968 and completed in 1976; and the Kuwait National Assembly Building, completed in 1982. They all demonst­rated Utzon's organic approach to design, and a highly attuned sensitivity to culture.

10,000 construction workers were engaged in the Sydney Opera House which was opened by Queen Elizabeth II in Oct 1973. Its final cost was $102 million, largely paid for by a State Lottery.

Jørn Utzon never returned to Australian although many reconciliat­ion attempts were made. But in 2004 he accepted an invitation to collaborate on the redesign of the building’s in­ter­iors, resulting in the dedication of the Utzon Room. In addition there are another 6 performance venues at Sydney Opera House: Opera Theatre, Concert Hall, Playhouse, Drama Theatre, Studio and Fore­court.

The Opera House has evolved to meet the demands of cont­emp­orary aud­iences and performance. The last completed major work on the Opera House was the extension of the western foyer areas and the opening of a drama theatre, playhouse and studio theatre. This el­egant extension by architect Rich­ard Johnson was completed with close attention to Utzon's original design approach, and has great­ly added to the capacity of the Opera House. The house remains one of the busiest performance venues in the world, hosting 1,500 events a year and receiving 8.2 million visitors annually. In 2007, the Sydney Opera House received UNESCO World Heritage listing. 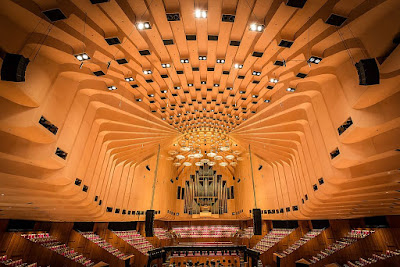 2013 marked the 40th anniversary of the Sydney Opera House. Thank you to Anthony Burke, UTS Professor of Architecture, used the ann­iversary to explore the above story for Australia's most recog­nis­able icon.

On Ut­zon's death at 90 in 2008, Frank Gehry memorialised the Dane saying: "Ut­zon made a building well ahead of its time, far ahead of available technology, and he persevered through extra­ord­inarily malicious publicity and negative criticism to build a building that changed the image of an entire country." Four generations of the Utzon family have been architects –Jørn’s father Aage, Jørn, his son Jan, plus Jan’s son Jeppe and daughter Kickan.

Hello Hels, Utzon was certainly ahead of his time, creating an iconic sculptural building also intended for heavy use. Many sculpture-buildings since then have seemed derivative, until it seems that architects don't care about the looks or function of a building, as long as it has the appearance of an absurd sculpture. But the Sydney Opera House remains as a beacon of true architectural originality.
--Jim

i don't think utzon would have imagined what a symbol of australia his work would become. i suggest people not look at the exterior too closely as it is looking rather shabby.

The ship sails look perfectly placed on the harbour.

The internat­ion­­al design com­p­etition that was launched in 1957 specifically planned to avoid the very problems you raised. Of the hundreds of great entries they received, the judges were aware that that their final decision was going to be controversial. Yet the judges and state government were totally confident in the Utzon design and, despite all the later problems, so were the citizens of Sydney.

nod... probably nobody knew how iconic Utzon's project was going to be. Sydney already had the Sydney Harbour Bridge which was recognisable all over the world. And so I thought that putting the Opera House and the Harbour Bridge close together might diminish both, a bit. But no. The Opera House represents this entire nation all around the world.

All architects are supposed to have a highly attuned sensitivity to the culture in which they are building, but none more so than Utzon. I will find an image of a 19th century sailing ship on the Harbour, next to the Opera House, to focus on Utzon's cultural awareness.

Hi Hels - so interesting reading this ... I vaguely remember learning about the Opera House as I've a vested interest in the Bridge ... but it's been good that you've given me the opportunity to learn more here. Utzon was very definitely far ahead of his time ... love his solution to solving the architectural challenges. Fascinating ... so thank you - cheers Hilary

I am delighted with the architecture of the Sydney Opera House.
A great building.

You're right. Many European countries built churches in the Gothic style. At that time, Poland was still broken up into districts.
And quite backward.

All the best, Hels.
Hugs and greetings:)
Luc ja

Your sister in law said...

Until the Opera House went up, Melbourne was the cultural capital of Australia. Then we could go to the opera and concerts in Sydney.

I know budgets and timelines often/always fall apart in big projects, but this story struck me as politically messy as well. Fortunately the Opera House was completed beautifully and Utzon's career was not ruined.

You are correct! This is a unique building design AND a perfect harbour-side location.

I think Melbourne is still the cultural capital of Australia, but I have to acknowledge two important points. Firstly there is only one National Opera Company in the country, and it is Sydney-based. Secondly each state capital has its own symphony orchestra, but the only Australian Chamber Orchestra is Sydney-based. Thanks to the Opera House!

Surely the SOH is among the few most iconic buildings in the world. It is the most perfect match for both style and location. I clearly remember the first time I saw it shortly after we arrived in Sydney. We were a short walk away at the Radisson Blu and as it came into view, the building seemed to fit so very perfectly with it's surroundings.
As much as Big Ben is England, the Eiffel Tower is France, so the SOH is Australia!
CLICK HERE for Bazza’s righteously rebarbative Blog ‘To Discover Ice’

sometimes important buildings survive and thrive, and sometimes important buildings are pulled down and disappear off the face of the earth. It seems totally random :( For example, Pennsylvania Station was a historic railroad station in Midtown Manhattan that looked spectacular.... until it was destroyed. Even the Eiffel Tower in Paris survived destruction by a miracle.

In 1966, I wasn't sure if the SOH would be completed, at least to its original specifications. Thank goodness Utzon's popular and professional support continued, even when the architect had to go home to Denmark.