The Victorian critic, social commentator and artist John Ruskin was born 1819. In 1848 Ruskin married the gorgeous, young, energetic Effie Gray (1828-97), a marriage that was annulled after six years because he was appalled by her desire for sex. And he was both censorious and destructive of JMW Turner's late works. So I might not have been prepared to see this year's exhibition (see below).

Yet I may have to rethink my previously antagonistic views of Ruskin as simply a rigorous religious zealot and anti-woman husband. In 2014, Ruskin's biographer Robert Hewison wrote that  a group of exhibitions celebrated the art of John Ruskin. They suggested that one of the C19th’s most influential thinkers really did have a second career. John Ruskin: Artist and Observer opened in 2014 at the Scottish National Portrait Gallery in Edinburgh and at the National Gallery of Canada in Ottawa.

The title of the Edinburgh exhibition asserted Ruskin’s status as an art­ist. This show of 130+ works drew on the principal Ruskin holdings at Oxford etc in Britain and also North America. The full-colour catalogue emphasised the aesthetic ap­p­roach of the show, with drawings arranged by subject matter. Rusk­in’s style underwent considerable development, from the picturesque convent­ions in which he was educated, to the perceptual precision of his Pre-Raphaelite years, to the looser gestures of his unstable periods.

Yet he exhibited few works in his lifetime, and treated his drawing essentially as a form of research. He created 100 drawings on his 1835 journey alone, but once he had captured what he wanted, he was content to leave off. Few works had the finish that would have been expected of a professional artist, which he was not. 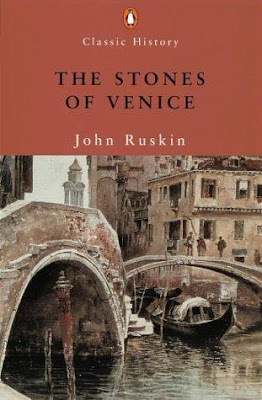 Ruskin, The Stones of Venice, 1851-3
3 volumes on Venetian art and architecture

Ruskin’s daguerreotypes were a study in their own right. A catal­ogue raisonné of the 325 known examples, Carrying Off the Palaces: John Ruskin’s Lost Daguerreotypes, was published by the specialists Ken and Jenny Jacobson. Then in 2006 the Jacobsons discovered a cache of material that doubled the size of the collection!


In July 1946 Kenneth Clark (1903–83) was appointed Slade Professor of Fine Art at Oxford. The post required him to give eight public lectures each year on the "History, Theory and Practice of the Fine Arts", particularly influenced by Ruskin. So it was not a surprise when Venetian study drawings were shown in the Kenneth Clark exhibition at Tate Britain in 2014, clarifying Ruskin’s influence on Clark’s notion of civ­ilisation and the ethics of capitalism.

In 2018 Hewison wrote ‘What would be the myth of Venice without the voice of John Ruskin?’ Gabriella Belli wrote in the catalogue intro­duction to the first ever monographic exhibition in Venice devoted to the man who owed as much to the city as the city owed to him. It was the place that Ruskin loved, and also despaired.

Ruskin’s The Stones of Venice was a three-volume treatise on Venetian art and architecture, the volumes being published between 1851-3. His writings did much to shape the way the city was perceived. The direct, physical encounter between Ruskin and the exhibition-viewer was even more powerful when the objects of his study were all around the Ducal Palace.

0n the ground floor, the original capitals and sculpture frag­ments from the palace were turned into an atmos­pheric dis­play of the Stones of Venice. For the main exhibition, the visitor climbed up to the Doge’s apart­ments where a sequence of rooms offered a spacious yet intimate setting.

The room devoted to St Mark’s and the Ducal Palace was the most impressive. Because en plein air photography was rare, the problem of displaying tiny reflective daguerreo­types had to be solved by photographing and enlarging them. The 100+ daguer­re­o­types that Ruskin made in Venice were a key part of his research, as were his worksheets of measurements and his notebooks that constructed his architect­ural chronology. Ruskin’s seeing the works of C16th Ven­etian painter Tintoretto had been a turning point, and both Tintoretto and Carpaccio were celebrated through Ruskin’s studies. 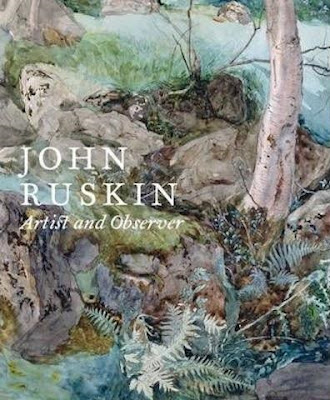 Hewison concluded that Ruskin was important in a wider context than simply that of artist and that his reputation extended beyond art-historical circles. A 100 years ago it was true that Ruskin fell far out of favour. But since the 1960s, his ideas and values have seen a remarkable revival.

OK Mr Hewison, I apologise. I already knew that William Morris was totally inspired by Ruskin when he produced The Nature of Gothic, especially Ruskin’s insistence on high quality hand labour. The famous William Morris & Co. wallpapers, textiles and other decorative arts rep­resented the finest flower­ings of the Arts and Crafts movement that Ruskin inspired. What I did not know was his influence on other artists and writers.

2019
London’s Guild of St George, founded by Ruskin, maintains Ruskin’s inst­ructive museum collection in Sheffield and promoting his ideas. The Guild is partnering with Museums Sheffield to pres­ent a sig­nif­icant exhibition called John Ruskin: the Power of Seeing. After ending in London this April, the exhibition will move to the Millennium Galleries in Sheffield from May to Sept 2019.

"John Ruskin Artist and Observer" is readily available and has been well reviewed. It focused on drawings because that was how Ruskin expressed the ecstacy he felt in the presence of nature's beauty. But personally speaking, the part I most enjoyed was where Ruskin supported pre-Raphaelitism.

Hello Hels, Many great minds have strong opinions, so it is not surprising to find that Ruskin had his faults. Also, today we are more likely to blend personal qualities with professional ones when deciding about historical figures. Still, I do not for a moment doubt Ruskin's importance and influence on 19th century art and thinking. He is one of the most quoted authors I have come across. He emerged as the represntative of his era, and was able to tell people what they were deep-down thinking, or at least should have been thinking.
--Jim

Hi Hels - thanks for this ... I know practically nothing about him - but I see he was interested in lots of disciplines ... I will have to explore more about him in due time: lots to find out. Cheers Hilary

Why did Ruskin marry a bouncy young woman, if the idea of female genitalia made him distressed? There were plenty of celibate academics around who offered a model of a respectable life style.

I admire sketches in the same way as Ruskin created them - to perfect an idea he was working on. When he got to where he wanted to be, he did no more sketching on that image.

I paid particular attention to your comment that "he is one of the most quoted authors I have come across". Two things I would say. 1] He is indeed one of the most quoted authors in university courses and in art history seminars for the last 30 years, but not when I was a young uni student. Nothing stands still; all academic disciplines change. And 2] he was a very important author, not necessarily a very important artist.


when I was a school girl and didn't think of history or art history as future career possibilities, my father talked about JMW Turner as the only artist he loved and remembered from his studies decades before. Of course I looked for every Turner I could find and discovered Ruskin, only by accident.

spot on! I wouldn't have minded if Ruskin fainted at the sight of female pubic hair.. as long as he didn't con the lovely Effie Gray into a loveless and sexless marriage. Perhaps he was forced into marriage by a pushy parent :(

As with many Victorian figures, a pressing concern is what to do with those aspects of a legacy that might trouble or even appal us. Ruskin’s philanthropy was mixed up with the imperialist ferment of Oxford in the 1870s; and his attraction to childhood innocence places him in the company of Lewis Carroll and other men. In his politics and personal relations, he could be humane and kind-hearted, yet also high-handed and authoritarian. Ruskin’s legacy may not be precisely in tune with today’s attitudes, but he also caused a fair amount of outrage in his own time, through public spats with economists, the Anglican clergy, and James McNeill Whistler.

thank you for a long, detailed article which I enjoyed. I had vaguely talked before about Ruskin's "unstable periods" without knowing what it meant. Your details about his serious mental collapses in and around 1878 refer to when he filled his diary with delirious reflections on the naked devil etc. No wonder these episodes took a heavy toll on his health and happiness. Poor poor man :(

I heard a story, possibly apocryphal, about Ruskin: Apparently on his wedding night after he married Effie Gray, he was shocked, horrified and probably repulsed to find that women also had pubic hair! True or not it fits what is known of his character.
I don't know if you ever saw Kenneth Clark's wonderful TV series 'Civilisation' in the sixties?
CLICK HERE for Bazza’s silently sagacious Blog ‘To Discover Ice’

my best guess is that being tied down with a needy wife, crying babies and dirty dishes would take energy and concentration from Ruskin's great goal in life - serious scholarship in Italy. So he asked his bride on their wedding night to NOT ask him for sex for 10 years. Apparently she agreed *sigh*.

I found your post of great interest as there is a recently opened exhibition about Ruskin at Two Temple Place, London: 'Ruskin and the art of seeing'. I have yet to see it but when I do I will recall some of your thoughts about him.

I hope you do go and visit the 'Ruskin and the Art of Seeing' Exhibition, before it leaves London. And I would love to read your impressions afterwards.