Josephine Baker (1906-1975) was born in a poor, black slum in St Louis Illinois in 1906. Her young mother Carrie had hoped to be a music hall dancer but she was forced to take in laundry instead. She was of mixed ethnic background: Native American/African American, descended from Apalachee Indians and Black slaves in South Carolina. Her absentee father, Eddie Carson, was a vaudeville drummer.

At 8, Josephine was hired out to a vicious white woman as a maid. Fortunately she moved from the St Louis area at 13. From watching the dancers in a local vaudeville house, Jo­sephine graduated to dancing in a touring show based in Phil­ad­el­phia at age 16. Despite being born in 1906, she married Willie Wells in 1919 and Will Baker in 1921. She took her second husband's surname for herself.

Josephine joined the chorus line of the touring show of Shuf­fle Along in Boston in 1922. The comedy was prod­uced in NY by a renowned African American song­-writing team, becoming the first all-Black Broad­way musical. Later Josephine was in New York for the Chocolate Dandies at the Cotton Club and the floor show at the Plantation Club in Harlem with Ethel Waters. With her slim figure and comic interludes, her performing skills were developing nicely.

Josephine was recruited for an all-black dance troupe in Paris so she went there to be a well paid variety dancer at the Théâtre des Champs Elysées. With other African Amer­icans, she introduced le jazz hot. The Fren­ch adored American jazz and exotic nudity, and her show was perfectly fitted to the era. Plus there was none of the racism black performers met in the USA.

When Parisians became aware of African American jazz in the 1920s, African taste in art and sculpture was a great infl­uen­ce on the Cubist movement. Josephine's sculptured oval head and lithe body were perfect for the Art Deco style. 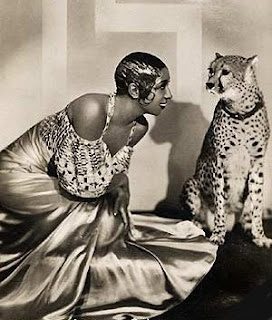 With her diamond collared cheetah, Chiquita,
Baker was the rage of the Folies Bergère

She was the favourite of artists and intellectuals like Picasso, Georges Roualt, Le Corbusier, Jean Cocteau and Ernest Hemingway. In 1925 she went to Paris to dance at the Théâtre des Champs-Élysées in La Revue Nègre. This most popular music-hall entertainer achieved star billing at the Folies-Bergère, where she amazed crowds with her danse sauvage in a G-string and bananas.  Unbridled sexuality!

In 1926, magazine covers and posters added to Josephine’s fame. That year she opened her own nightclub in Pigalle called Chez Joséphine, a chic affluent woman who paraded her pet cheetah down the elegant Champs Elysées.

In 1934 Baker performed in an operetta, Offen­bach's La Créole at Théâtre Marigny, opening for a 6 months run. Her agent Abatino helped Josephine evolve from a mere ex­otic dancer to being one of the high-paid stars in the wor­ld. Jos­ephine was in America with the Ziegfeld Follies in 1936 when her Abatino died.

When Germany occupied Belgium in 1940, Josephine became a Red Cross nurse, watching over refugees. And when Germany occupied France itself, she worked for the French Resistance as an und­erground courier, writing secret information on her undies. In Oct 1940 she travelled from London to SW France, through Spain and Portugal, to Rio de Janeiro and back to Marseilles. Was she saving refugees? Spying for France?

Josephine lived in North Africa during WW2, where she’d suff­ered peritonitis. She underwent two operations in 1941 and 1942, leaving her weak. But she was not too weak to entertain troops in North Africa and the Middle East, as an officer in the Free French forces. But did the surgeries leave her infertile? 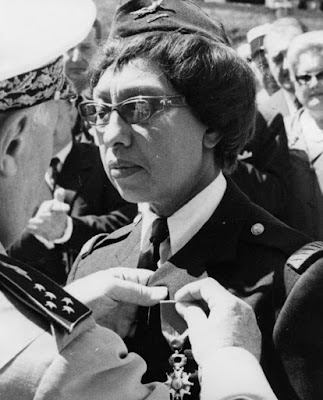 As an officer in women's auxiliary of the Free French forces,
Josephine was awarded the Croix de Guerre.

She was awarded the Croix de Guerre and the Légion d'Honneur by General Charles de Gaulle. In 1947 she married jazz band­leader Joe Bouillon, and bought her 300-acre chateau and est­ate in the Dordogne in S.W France, Les Milandes. When she mar­ried Joe, she was middle‐aged, and already thinking of adoption.

Now a totally different woman. Miki Sawada had moved to Paris in 1932, her husband having been posted as a consul in the Japanese embassy. Josephine had first met Miki in Paris but didn’t visit Japan for the first time until 1954. There Miki was caring for abandoned mixed‐race children of American soldiers and Japanese women in Occupied Japan postwar. Josephine believed that these Occup­at­ion Babies, discriminated against by the Japanese, was an Amer­ic­an problem as well as a Japanese one. And she wished to bring two boys home to France at any cost. She was determined to adopt 12 children of various origins and raise her Rainbow Tribe toget­h­er from toddlerhood: a courageous woman!

Having experienced the deep‐rooted racism of America, Josephine dreamed of a racist-free society. She already knew about the Internat­ional League Against Racism and Anti‐Semitism/LICRA. And she married a Jew, Jean Lion, back in 1937. So, in addition to her concerts in Japan, Josephine’s key role was to make public speeches. The French branch of LICRA, founded in 1928 to fight anti‐Semitism in Eu­r­ope, asked her to give lectures, to estab­lish a sim­ilar organisation in Jap­an. 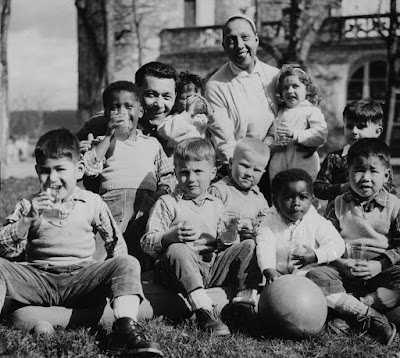 Josephine Baker, husband Joe Bouillon, and their Rainbow Tribe of adopted children
at Les Milandes, in the Dordogne

In 1951 Josephine’s trip to New York was damaged by a racial in­cident at the Stork Club. Even as  late as 1955, on her return to the U.S.A, she was questioned by immigration officials about her alleged anti-American and pro-Japanese views. The journalist Wal­ter Winchell and Senator McCarthy believed she was a communist.

She retired from the stage in 1956, but because of her need to maintain Les Milandes, Josephine was later obliged to return to work… until her death from a stroke in 1975! The Roman Catholic funeral service was held in a Paris church.

In Europe and America, there had always been a lot of interest in Jos­ephine as a performer and in 1920-30s Parisian culture. But Josephine had another import­ant face: as an activist who chall­enged racism and war, a humanitarian and an idealist.

There are five biographies of Josephine Baker, including Jos­éphine (1978) which was written by her and by Joe Bouillon.

Just imagine - Senator McCarthy going after a black, humanitarian, woman, married to a Jew, who campaigned against racism. Baker was an easy target.

Hello Hels, I have always admired Josephine Baker, but much of the information you presented here was new to me. It is important to remember that she was not simply good at manipulating scandal and PR, she was an amazing performer, with a great voice, and her records are electrifying and very entertaining. She perfectly typified the sophisticated and cosmopolitan Paris of her era.
--Jim

plus another so-called treasonous element... Josephine Baker asked for French citizenship and got it. She believed that while anti-black racism occurred in France, she faced less of it than she did in the USA. Perhaps Senator McCarthy saw that as evidence of her socialism.

I had not even realised Josephine Baker could sing. In Headstuff, I read she had starred in an opera written specifically for her, and her vocal training had transformed her from a cabaret singer into a true talent in the mid 30s. Alas she was too much of a talent for some – when she decided to return to New York to do a show in 1936, she was not very well received.

Clearly Paris was wonderful in the 1920s and 30s, but I wanted to know what happened to her next. Hers turned out to be a great story.

Do check out some of her recordings and movies from the 30s where she sings - BEAUTIFUL voice and such spirit.

What spying was Baker involved in?

She was a fantastic dancer, and totally inhibition-free :) I cannot wait to find her musical productions.

my go-to source of reliable information is the BBC (in History Extra May 2017):

When the Nazis occupied the French capital in the summer of 1940, Baker became a spy for the French Resistance. Baker’s performances provided her with the perfect excuse for travelling across Europe, and as a glamorous star she was invited to embassy parties wherever she went. At these parties, Baker would eavesdrop and flirt to gather information about German troop locations and airfields from high-ranking Italian, Japanese and Nazi officials. Her fellow secret agent recorded the in¬formation in invisible ink on her sheet music, while Baker pinned important photos to her underwear.

In 1941 Baker and her entourage travelled to the French colonies in north Africa, to establish a permanent liaison and transmission centre with British intelligence in Casablanca, and to help set up a network making Spanish Moroccan passports available to eastern European Jews in order to help them escape for South America.

I had not heard of her, so that was interesting to learn about her somewhat extraordinary life. The communist witch hunt in the US clearly affected more than just political types and actors.

the House Unamerican Activities Committee was an insane asylum, selecting targets who ranged from politically active and therefore worrying to Senator McCarthy and his colleagues, to people who had never had a political thought in their lives.

Josephine Baker opposed racism in the USA, and so was immediately labelled as a traitor. The problem was the US government could not restrict her travel by withdrawing her passport because she was a French citizen. The American government had to employ more creative means to silence her.

Hi Hels - I didn't know all those other things she did, or so much backstory - I knew she sang ... she'd be an interesting woman to read a biography (or autobio) about ... fascinating - cheers Hilary

one of the most annoying things about history journals and magazines is that they only publish what is acceptable at the time of publication, and therefore we might not have known anything about the war time and 1950s activities of Josephine Baker at the time that those events actually occurred. I knew everything about Ms Baker in the 1920s and 30s, yet in her truly significant years I found nothing - at least in English-language literature.