John Ruskin (1819–1900) 's life was always going to be difficult with an extremely devout Calvinist mother. The young man grew up to be intellectually skilled but socially unskilled. At least as far as potential marriage partners  went. After getting his degree at Oxford, he began his career as an art critic, writer, full time thinker and part time artist.

Ruskin soon began collecting pictures by Joseph Mallord William Turner (1775–1851). After graduation in 1842, Ruskin busied himself writing an admiring book about Turner, whose work had been unkindly reviewed by the art critics. The book was called Modern Painters, published in five volumes 1843-60. He then followed this work up with The Seven Lamps of Architecture 1849 and The Stones of Venice published in three volumes 1851-53. Ruskin was clearly a very productive and very talented writer. 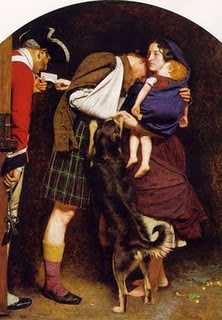 Effie Ruskin, modelling in The Order of Release by Millais, 1853, Tate.

In 1848 Ruskin married the gorgeous, young, energetic Effie Gray (1828-97), a marriage that was annulled after six years because he could not or would not tolerate her sexuality. The evidence is readily available. In a letter to her parents, a sad Effie claimed her husband was repulsed by her. "He alleged various reasons, hatred to children, religious motives, a desire to preserve my beauty, and finally this last year he told me his true reason... that he had imagined women were quite different to what he saw I was, and that the reason he did not make me his Wife was because he was disgusted with my person the first evening."

Ruskin confirmed this in his statement to his lawyer during the annulment proceedings. "It may be thought strange that I could abstain from a woman who to most people was so attractive. But though her face was beautiful, her person was not formed to excite passion. On the contrary, there were certain circumstances in her person which completely checked it."

Fortunately for Effie, she did not have to remain a virgin for the rest of her life. After the annulment of her marriage to Ruskin, she agreed to be the model for John Everett Millais' painting The Order of Release 1853. In 1855, she married Millais and they had eight delightful children. 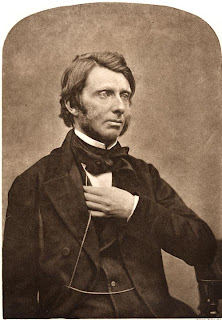 Now back to JMW Turner. The rather poorly dressed, badly spoken artist never married, but he did have one very satisfying relationship in the 1730s that lasted until his death in 1851. Martin Gayford wrote that Turner lived in domestic bliss in Margate with his landlady, a buxom and illiterate young widow called Sophia Booth. It seemed to have been the best period he ever spent with a woman, and since income was no longer a problem, the two of them spent more of the time in bed than out of it. Lucky Turner!

Since Turner was not playing out the role of famous artist in Margate and then in Chelsea, he did not use his real name locally. He called himself Admiral Booth while visiting his favourite watering holes.

Turner died at the age of 76 in 1851, leaving behind some 300 paintings and 19,000 drawings that Ruskin catalogued. But Ruskin did more than cataloguing. Ruskin claimed that in 1858 he burned bundles of paintings and drawings done by Turner during the Sophia Caroline Booth era, to protect Turner's posthumous reputation. Turner's reputation would have been at risk, presumably, because either Turner and Booth were living in sin, or because the paintings and drawings had sexualised content. In either case, Ruskin had been vigorously defending Turner for 10 years and felt betrayed by the older man.

Ruskin's friend Ralph Nicholson Wornum (1812-77), who was Keeper of the National Gallery from 1855 until his death, might or might not have known about the destruction of Turner's works. 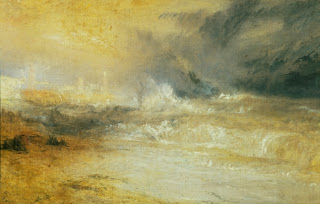 Readers might like to read William James’ book The Order of Release - The Story of John Ruskin, Effie Gray and John Everett Millais, published by John Murray in 1946.

Robert Hewison's book Ruskin, Turner and the Pre-Raphaelites, was published by the Tate in 2000. It accompanied their exhibition of the same name.
Posted by Hels at 5.7.11

There is an opera from American composer David Lang, called Modern Painters, which explores Rushkin's relationship with Effie and his mother and also features Millias. I was at the world premiere at Santa Fe in 1995, but I don't think it has ever been recorded.

I was surprised enough when there was a very success play about the relationship between Berenson and Duveen.

I am even more surprised at an opera exploring the relationships between Ruskin, his mother, his wife and her second husband. Although I find the topic fascinating, I wonder why David Lang did also.

Pretty good post. I just stumbled upon your blog and wanted to say that I have really enjoyed reading your blog posts. Any way I’ll be subscribing to your feed and I hope you post again soon. Thanks! I really do believe, however, that it just comes down to finding your own niche.

many thanks. I loved reading your comment. By the way, does the "finding your own niche" refer to me? or to Ruskin and Turner?

I can't find out whether Emma Thompsons film of Ruskin is yet in production. I've read lately some real doubts about the 'sex' theory (which only really started in the 60's) and Ruskin creepily wrote to his parents denying it. Several diarists wrote that Effie was boring and very coarse in conversation. I'm not convinced Ruskin has been well treated by history.

Hello Helen:
Well, what a tangled web is woven here...so many questions without definite answers. But, perhaps it is the intrigue of it all which is the most delicious aspect. However, the thought of mass destruction of Turner's work whatever the circumstances is rather sad.

It is very possible that Effie was boring and did indeed use coarse language. However Ruskin suggested from the _very first night_ of his marriage that he would never change his mind about consummating the marriage. Although there were no witnesses to their honeymoon, it seems he made Effie promise to not ask for sex for 10 years.

Ruskin could not possibly have known if Effie was boring, coarse, interesting, frigid or sexually hot-to-trot by the first day of their marriage.

If you think Ruskin was badly treated, consider poor Effie's position. Ruskin told the court he wanted an annulment because his wife was mentally unbalanced. I am not sure she ever got past that bit of nastiness.

I agree totally... many questions and lots of gossip, without definite answers.

Merryn Williams' book is called Effie: A Victorian Scandal - From Ruskin's Wife to Millais's Muse. In it she says that Ruskin, Millais and Effie were exposed to the kind of gossip today's celebrities can only dream of.

Effie was at the time regarded as mentally ill, immoral and certainly tainted while Ruskin was seen either as virtuous, or deranged and impotent. Millais went on to become one of Britain s most popular painters, but the stigma of his wife's past would never be forgotten.

Helen, Ruskin definately had some issues but this gives a pretty good balanced account of both sides:

I'm not trying to wrong Effie who I think we all feel some sympathy for. But I've been wondering lately whether things were quite so black and white as often painted - or perhaps human emotions are harder to pin down. I wonder what Ruskin really wanted in a wife anyway ?

I read the Scandalous Women blog and agreed that it gave a fair summary of the entire affair.

But more importantly for the purposes of this post was whether Ruskin's disgust at Effie's body and sexuality might have predicted Ruskin's disgust with Turner's sexual romps. I think it did.

I don't know much about Turner to my shame but:

"Ruskin, who revered Turner as an artist, disapproved of the way he “wallowed” there at weekends and destroyed some drawing apparently done there of “of sailors’ women…"

He called himself Mr Booth when in Margate and the Turner Contemorary is now on the site of her Guest House.

I do so enjoy your posts Helen.

thank you :). This is another of those topics where we have to continue reading and continue asking questions.

One of Ruskin's mother's more malevolent impacts was when he was a university student. Apparently old Mrs Ruskin moved into a flat next to her son's Oxford college. She knew that young men met young ladies after lectures and wanted to nip that in the bud. So she insisted that John have tea with her, every day of the week! Thus in four years as a student, John Ruskin never met a young woman.

A stronger man would have told Mummy Dearest to go back home to her own husband.

Poor Ruskin. I think that he would be devastated if he knew that he would be better known today for a lurid, though often confusing, to us at least, interlude in his life concerning his sexuality, rather than that of his considerable influence on the fine and decorative arts of the nineteenth century.

To be fair, none of us really knows what Ruskin thought, apart from Ruskin. That he still maintained his support for Millais, even after the artist was married to his ex-wife, must surely show some redeeming characteristics on Ruskin's part.

The only reason Ruskin eventually ended his support for Millais was the artists pursuit of easy money with his awful portraits of the rich and famous.

I actually liked Ruskin's writing very much. He may not have been a brilliant artist himself, but he was a very productive art critic and was popular as Slade Professor of Fine Art at Oxford University. He wrote extremely well about his observations while travelling abroad. And finally Ruskin's support for Millais, Hunt and Rossetti was critical. He was a very talented writer, teacher and critic.

However there is no getting away from it - Ruskin's personal life was a cockup. Nobody would have known, or cared, had he remained a bachelor all his life. But he married, and this had dire consequences for other people as well (especially poor Effie).

That seems about right. Women were probably way beyond the understanding of Ruskin and he should have just stayed a bachelor, reputation largely intact and with a much happier Effie.

Ruskin's marriage was discussed in Phyllis Rose's book "Parallel lives", along with the marriages of Carlyle, Dickens, Mills, and George Eliot. I can't remember if the book covered Effie's life after the marriage, but I'm pleased that she had a happier ending.

I don't think I have ever seen Phyllis Rose's book, but a quick inspection of the reviews sounds promising. The whole issue of how Victorian husbands and wives interacted is fascinating. Even after my foray into the Ruskin marriage! Or the Dickens' marriage, even worse.

The Ruskin Collection at Museums Sheffield reopened this year after new display cases, lighting and artefacts were installed. Ruskin amassed a remarkable collection of fine art, including works by Turner and Durer, and natural history. Museums Sheffield is the place to see a good sample of his collection.

A colleague referred me to your website. Thnx for the information.\nFeel free to visit my blog : sexuality couselling melbourne

Glad you enjoyed the post. It wasn't Turner who needed your counselling services; it was definitely Ruskin.

Perfect timing for a renewed look at John Ruskin, thank you. This post was written 8 years ago and am I certain that new material has been published since.