After publishing a post on American forger Mark Landis, I read the book A Forger's Tale: The memoir of one of Britain's most suc­c­essful and infamous art forgers by Shaun Greenhalgh (Allen & Unwin, 2017).

Shaun Greenhalgh (born 1961) left school at 16 with no hope of tert­iary training. He taught himself art, working in a wide range of media, including painting, drawing, sculpture and metal­work. And he used many materials in his art - silver, stone, paper, marble, metal and glass.

He tried selling work under his own name but not many people were interested. Fortunately for him, Shaun was good at copying other art­ists’ work, so he did that instead. It was not illegal to copy art, but it was illegal to assert that the work was an original Old Master. 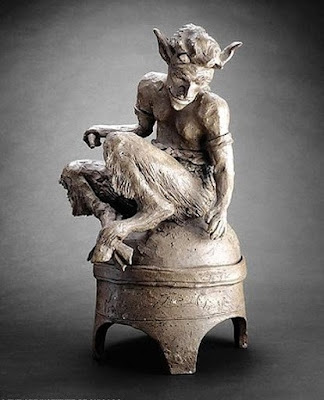 The Faun,
apparently sculpted by Paul Gauguin, but

Shaun was undoubtedly influenced by his job as an antiques dealer, taking his copies from sketches, photographs, art books and catal­ogues. He also did careful research to auth­enticate his items with hist­or­ies and provenance (eg faking letters from the artists), to demonstrate his ownership. Completed items were then stored about his elderly parents’ shabby council house near Bolton.

Shaun Greenhalgh made ancient Egyptian, Roman and Chinese art objects, medieval Christian relics, 19th century porcelain and oil paintings. His father George was the trustworthy frontman, the older man who met and chatted up the potential buyers. George and mother Olive were also important because they explained how Shaun came to own such items in the first place i.e family heirlooms.

In 1999 Shaun bought a catalogue from an 1890s auction in a noble Devon home, Silverton Park. Among the items listed were 8 Egyptian figures. Shaun then created his Amarna Princess, a rare statue of one of the daughters of Phar­aoh Akhen­at­en and Queen Nef­ertiti. George told Bolton Museum in 2002 that the Amarna was from his grand­father’s personal collection, bought at auction long ago.

Bolton Museum hailed their discovery of the Amarna Princess as a coup, calling George Greenhalgh a nice old man who had no idea of the significance of his art. In 2003, after checking with the cur­ators at the British Museum and Christ­ie's, Bolton Mus­eum bought the Amarna Princess for £440,000/$700,000 and displayed it proudly. Jackpot!

Some other examples. Greenhalgh's The Faun was sold at a Sotheby's auction in London in 1994; it was a sculpture supposedly made by C19th French master Paul Gauguin. The private buyer came to light when the Art Institute of Chicago put this ceramic sculpture on disp­lay in 1997. The Art Institute of Chicago described The Faun sculpture as a major re­-discovery and included it in their defin­itive exhibition on Gauguin. Then The Faun was displayed at the van Gogh Mus­eum in Amsterdam; while the Amarna Princess was dis­played at South Bank Hayward Art Gallery. 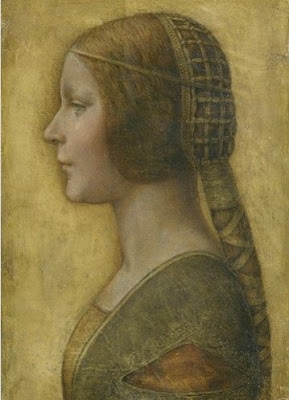 La Bella Principessa, apparently by Leonardo da Vinci
but claimed to have been painted by Greenhalgh

The Greenhalghs brought Before Kick Off, appar­ent­ly by LS Lowry, to the Bolton Auction Rooms for sale. The parents had copied letters from Lowry, in­sert­ing their own names in to make it look like they were great friends. And a painting by Otto Dix, apparently stolen from Dresden in 1939, was “recovered” by the Greenhalghs and then presented to the Tate Gallery.

Having successfully tricked the exp­erts, the Greenhalghs tried again using the same Silverton Park pro­venance. They produced three Ass­yr­ian reliefs of soldier and horses, apparently from the Palace of Sen­nacherib in 600 BC. The British Museum inspected them in Nov 2005, believed they were authentic, and wanted to buy one of them because it matched a draw­ing by AH Layard in its collection. However when two of the reliefs were submitted to Bonhams auction house, their antiquities curator reported a clear fake. The British Museum contacted Scot­land Yard’s Arts and Antiq­uit­ies Unit and eventually the family was arrested.

Shaun had tricked museums, galleries and private collectors for 17+ years before the family was caught. But how clean were the dealers’ hands? Apparently some of them tried to take advantage, talking down individual works before selling them as genuine.

Shaun could not sell all 120 artworks that he had offer­ed to galleries. But take note of the success of Shaun’s sales to private ind­ividuals, rather than to galleries. Individual collectors did not have the same level of expertise at their dispos­al as instit­utions. Two private American buyers were noticed, but only after they donated their purchase to the British Museum.

Det Sgt Rapley of the Metropolitan Police Arts & Antiquities Unit said “Looking at the Greenhalgh fakes now I'm not sure the items would fool anyone; it was the credibility of the provenances that went with them”. Yet we know the experts and instit­utions who were fooled included Tate Modern, Brit­ish Museum, Henry Moore Institute and auction houses Bon­hams, Christie's and Sotheby's. They were the experts!!

In 2007, Bolton Crown Court sentenced Shaun Greenhalgh to almost 5 years in prison for the crime of producing art­istic forg­eries. 44 of his forgeries were discussed during the trial, of the 120 which had been presented to art institutions. Bolton Museum told the court they had followed establ­is­h­ed procedure and were therefore not responsible. The judge agreed, focusing instead on the 3 Greenhalghs’ conspiracy. As a result, Shaun had to serve almost 5 years for fraud, his 84 year old father George served a shorter time and mum Olive was given a suspended sentence. Art lovers, however, were unimpressed by the museum experts' incom­petence. 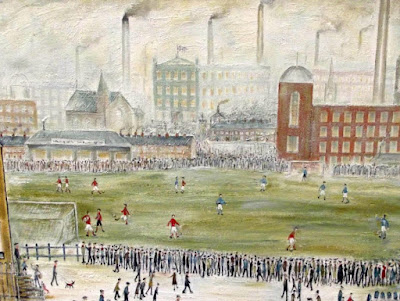 At a confiscation hearing in Jan 2008, Shaun Greenhalgh was con­victed for conspiracy to conceal and transfer £410,392. The Greenhalghs actually made up to £1.5 million.

Greenhalgh had traded in dozens of fake artworks over almost two decades but didn’t begin writing his book of memoirs, A Forger's Tale, until he had lots of free time in gaol. He included a detailed glossary in the book that could help museums and art police who need some practical people on their staff.

Following Shaun Greenhalgh's release from gaol in 2010, he launched a website selling his own art! The photo credits belong to The Guardian.

Hello Hels, Provenance is considered like the magic DNA evidence of art, but I often find it dubious. How many people who have genuine paintings also have letters from the artists discussing the same. And how many collectors have this kind of documentation concerning many of their objects?

When unknown good items by famous artists, especially too many good items, show up in some old house, storage unit, album, etc., my fraud detection system goes on red alert, and "provenance," considering how easily it is faked, just makes me more suspicious.
--Jim

Connoisseurship must come first - thorough historical knowledge of the putative artist's art; a good eye; scientific evidence of the age of the canvas/wooden frame/paint; x-rays etc.

Only then does provenance kick in, adding extra information that either confirms the original findings or tricking the new owners into thinking their art object was really done by the artist they paid for. The most reliable information usually comes from auction house catalogues which document the history of the art object back over the decades/centuries. But then I have to repeat: how clean were the dealers’ hands in Shaun Greenhalgh's very clever works?

Greenhalgh was skilled, wasn't he?

very skilled! The lad from Lancashire took the art world by storm, creating and selling masterpiece after masterpiece until one day in 2006, it all came apart. It was a shame that Greenhalgh didn't paint or sculpt under his own name, but I suppose there could never be another Paul Gauguin

The whole superstructure of art-dealing is based on a flimsy foundation, isn’t it? Sometimes greed and the idea of fame can blind the eyes and dull the senses of so-called experts. There was a recent BBC series called Fake or Fortune? where ‘experts’ examined privately-owned pieces of art and came to a decision as to their authenticity. With that approval Sotheby’s or Christie’s would be able to safely sell the work.
You can buy works by Tom Keating very cheaply these days – they aren’t much good!
CLICK HERE for Bazza’s apple-knocking Blog ‘To Discover Ice’

I really love Fake or Fortune. The trouble for us is that the Fake or Fortune programme has an enormous staff, money for travel, contact with specialist experts and months of time to get it right. The average private buyer or auction house, on the other hand, usually has a week to do the due diligence and few specialist contacts to do the x-ray checking etc.

I must have a look at Tom Keating, given that he was not just faking art for greed (so he said). He was actually teaching the art industry a lesson!

What a wank paintings can be. People pay millions for fake paintings without provenance. Do they actually like the painting? Is it a good work of art? They buy them because they think they are important works. I rather admire producers of fake paintings who take advantage of the rich and gullible, along with camp beret wearing gallery directors, never mind museum experts.

It is totally inappropriate for the fakers to fool private collectors and galleries, but I do know what you mean about taking advantage of the rich and snotty :)

Just so we all have a new look at art crime in Australia, see the Black Mark blog:
https://melbourneartcritic.wordpress.com/2019/01/24/art-crimes-in-australia-in-progress/

its all pretty disgusting , the price paid fro artwork when you consider the poverty and misery that Vincent Van Gogh lived in . The saddest thing was that he had no recognition in his lifetimes. The fact that he could keep painting even when many mocked his ability is the miracle. What a pity that Mr Greenhalgh didn't get to express HIMSELF with his obviously significant talent . I find the whole at thing and the treatment of its treasures as investments pretty disgusting . I think if I could afford it I would be buying young live artists and putting something back into their commitment to making the world a more beautiful and thoughtful place through their expression of it .

think of the all artists, musicians and writers who had to live lives of struggle and to die without notable memorials. I am thinking of Van Gogh of course, but also El Greco, Vermeer, Monet, Kafka, Mozart etc etc. These were truly great talents yet they were largely unrecognised or inadequately paid in their own life time. Now they are celebrated everywhere.

Fascinating, I had not heard of him before!

What a most remarkable talent. I had heard of him but didn't know of his website There is a certain theme in the books you have been reading lately (I'm writing these comments backwards from the latest one) - people who had great talents but achieved fame in unconventional ways.

after thinking about it for a year, I finally retired at the end of the academic year in mid Dec. It was a big decision, and one that I prepared for in advance. While I was still working, I largely read short journal articles; now in retirement I am reading large books :)

Thank goodness for serious blogs. Otherwise the mind might go to mush... after a certain age.

Hi Hels - I did know about the Greenhalghs but hadn't paid much attention as I was involved with caring elderlies at that stage. So thank you for the update - well he succeeded ... and paid for it - I wonder how they're doing now ... probably his parents have passed on. Still thanks for the read - cheers Hilary

it is important to describe the faking project as a family enterprise, yes. Firstly I forgot to mention that Shaun's brother handled the finances derived from the sales. Secondly I forgot to specify that Olive's father, Shaun's grandfather, really had owned an art gallery. His gallery gave credibility to Shaun's collection.